April Fool’s Day – The wind has been steadily increasing overnight and some of the team – including Frits and Lee – have abandoned Hellraiser 2 to seek more comfortable berths on board the much larger SWII which does not bounce around so much in the increasing swell.

Plans for the day are much the same as yesterday, with the exception that the team will be joined by Steve and Sparra in Hellraiser 2 which – because we are operating more than eight miles away from the main vessel SWII – will act as a temporary rest stop for the teams working out of the smaller dive tenders.

Four teams on and in the water today – Frits and John ‘magging’ in Maggie; Gil, Greg, Lee and Freddy diving anomalies in Caribe; Xanthe, Jacqui, Andrew, Rick, Glen and I ‘magging’ and diving in the Hydro-sport; and Sparra, Steve and Grant on Hellraiser 2. 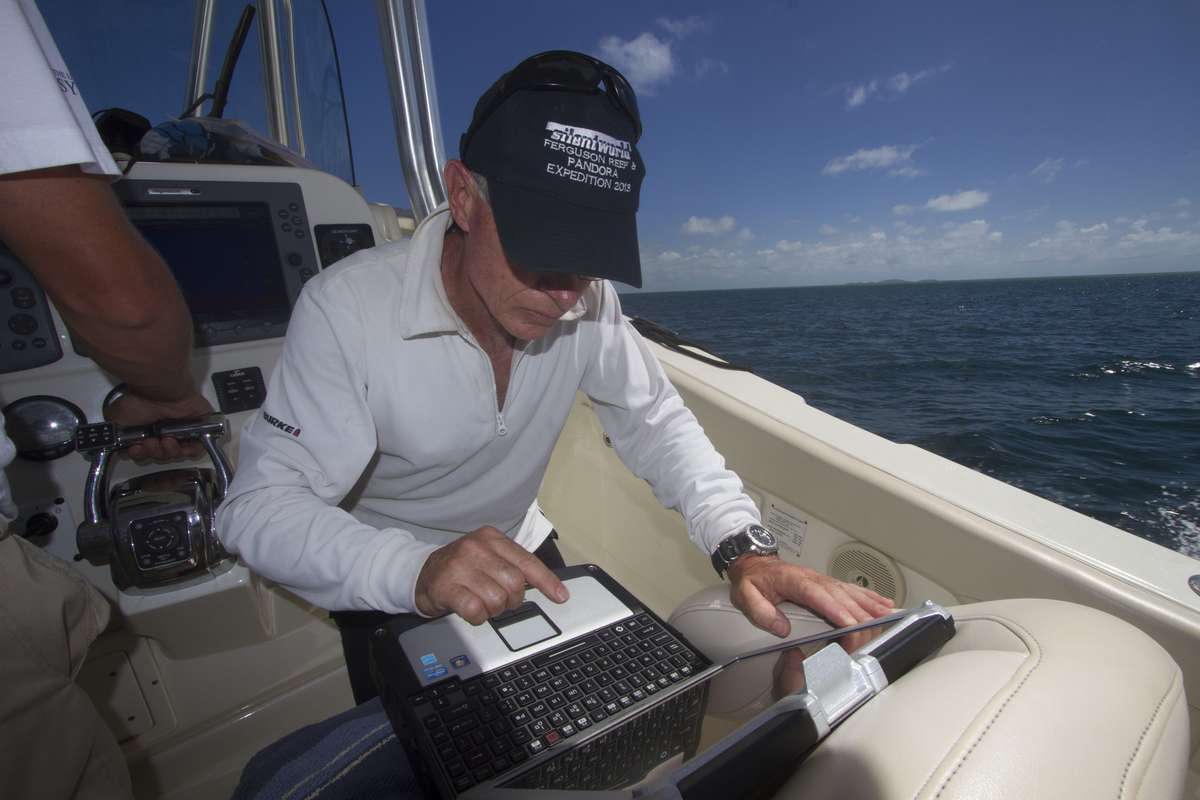 Whilst Maggie and Caribe finished off the remaining coral patches and bommies at Fison Reefs the Hydro-sport headed out to a series of unnamed reefs south of Quoin Island and commenced to ‘mag’ or maybe I should say attempted to ‘mag’ for despite many previous days of faithful service today the unit refused to operate and, despite the team’s best efforts along with numerous discussions with Frits – our mag guru – over the radio, refused to cooperate all day.

Despite the setback all teams continued searching the reefs for any straight lines, circles and right angles or glints of copper and whitish lead that may be part of the Morning Star, but unfortunately nothing was seen of the 180 ton brig.

Today’s weather forecast is not promising – the Bureau are predicting that there will be a strong south-easterly change coming in later tonight or early tomorrow morning making condition unworkable in the vicinity of Eel Reef. With that in mind we have decided to make this our last day of searching for the Morning Star before moving southwards to the more protected anchorage of Stanley Island in the Flinders Group. 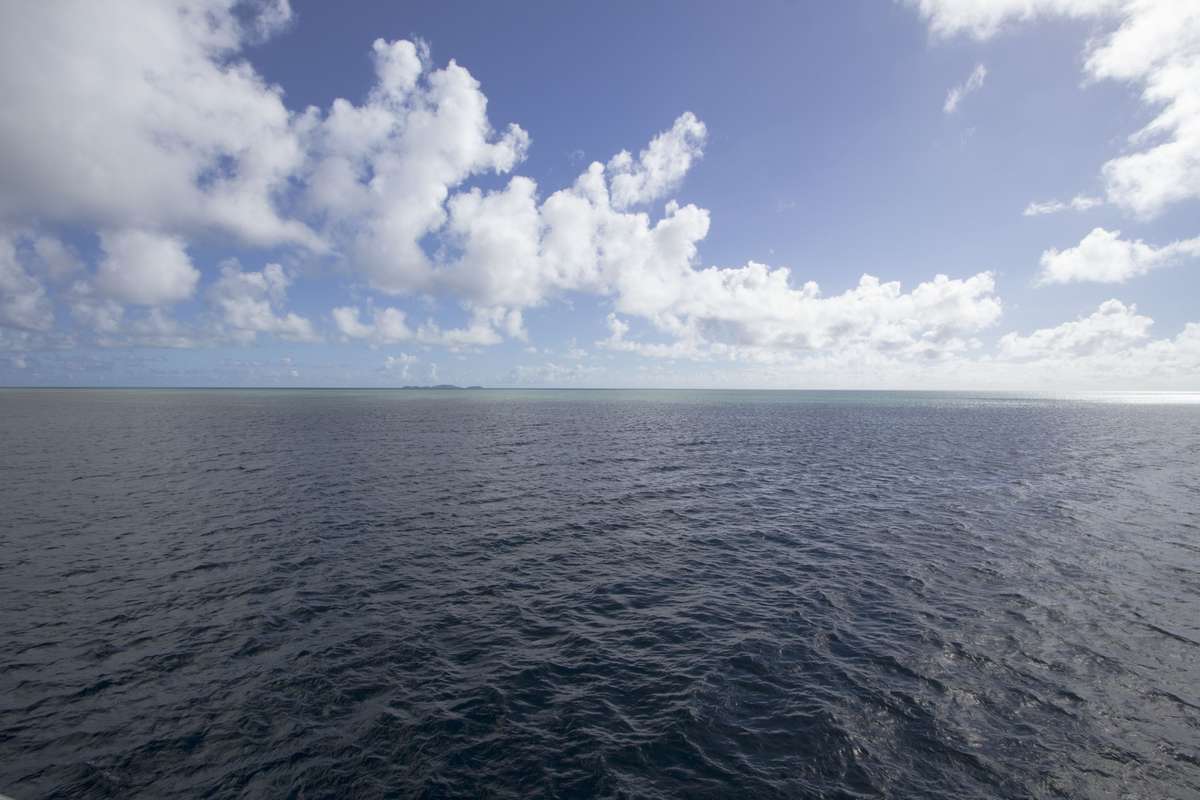 Some days are perfect. 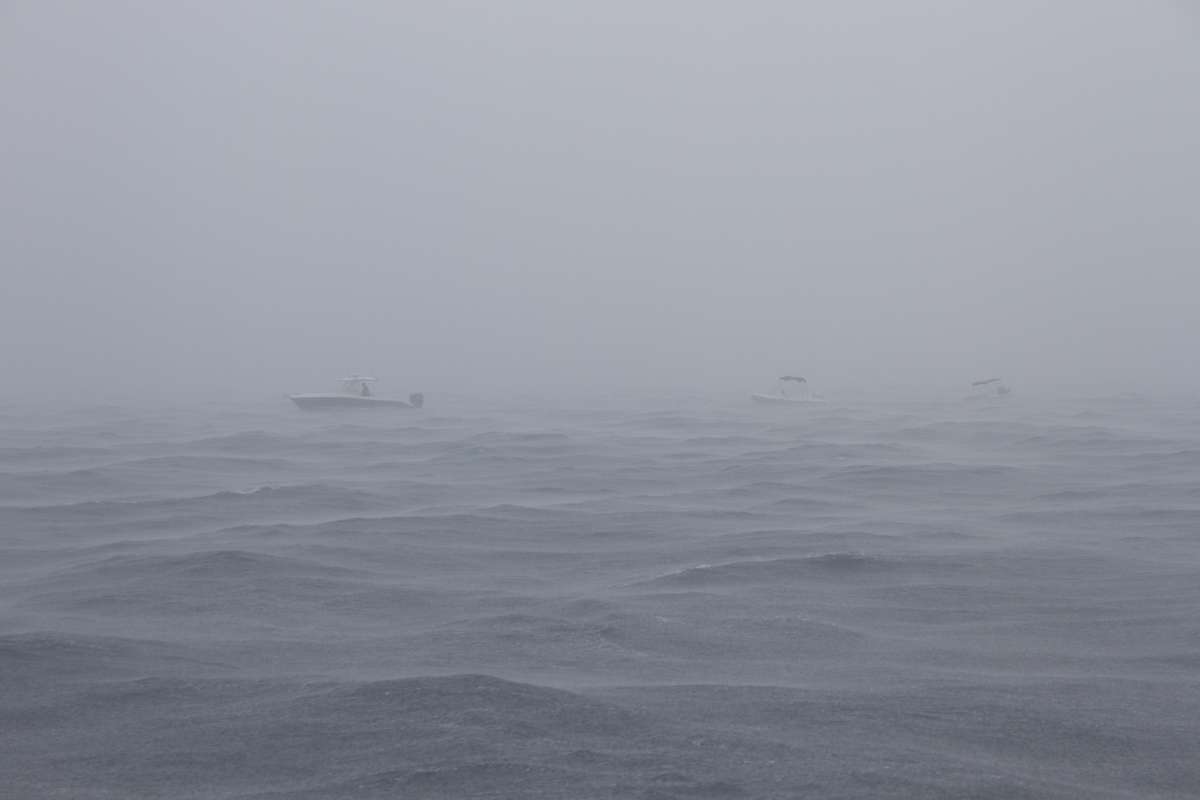 Some days aren’t so perfect.

As it will take Hellraiser 2 some 12 to 14 hours to get to the Flinders Group they have to depart before lunch time today and the team based on-board the smaller boat have to move home temporarily to the larger and faster SWII which can make the same passage in less than eight hours.

We decided to spend our last day looking for the Morning Star on ‘magging’ the eastern most edge of Eel Reef and following up on a series of promising magnetic anomalies detected the previous day.

Whilst the Caribe team stayed with Frits and John in Maggie, the team on Hydro-sport (Jacqui, Xanthe, Andrew, Grant, Rick, Glen and I) checked out a mag hotspot. The area was buoyed off, a 100 metre long tape laid out on the seabed and then all the divers, armed with various metal detectors and using the tape as a guide swam along the seabed looking for any signs of a shipwreck. 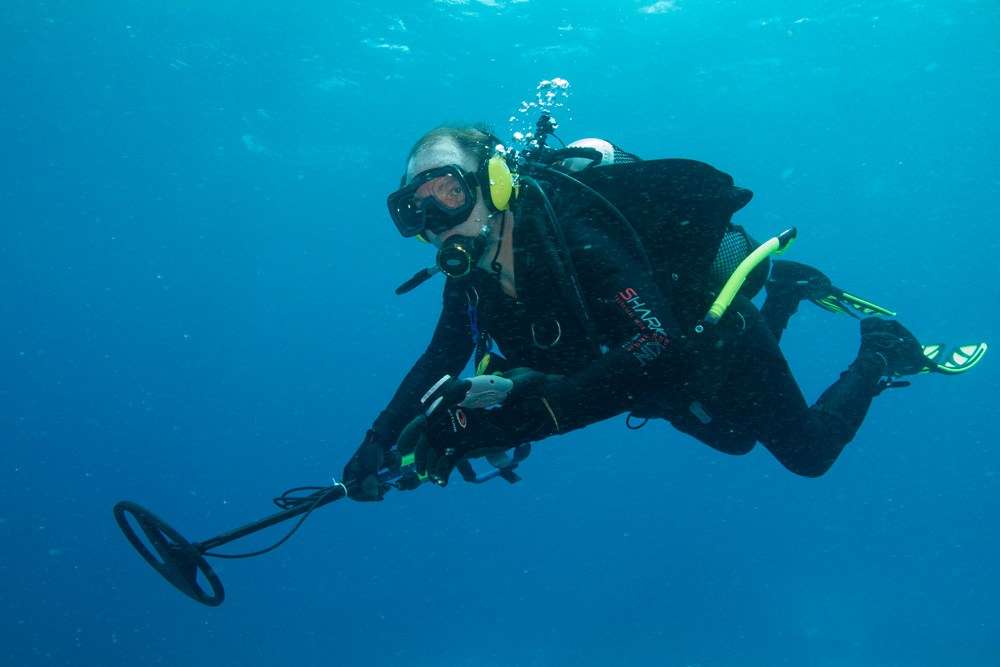 We landed on a flat, sandy relatively featureless bottom and swam southwards towards one of the bommie’s that make up Fison Reef – passing over the occasional sponge the team reached the bommie without detecting any feature which maybe the cause of the magnetic signature.

Returning to the surface – Glen, the First Officer of SWII, and our boat operator for the day, reported that Frits and John had located a series of large anomalies on the eastern edge of Eel Reef.

We arrived on site and heard from Gil, Greg, Lee and Freddy in the Caribe that they had detected material with their various metal detectors in several locations.

After a brief discussion, and an ever briefer lunch, we decided to blitz the area and throw all divers in the water armed with all our detectors. The area was buoyed off, the 100 metre tape deployed and the underwater swimline set up.  The divers then swam southwards for more than 200 metres using the tape as a guide and when that ran out, compasses.

The divers located several sub-surface anomalies but nothing could be seen on the surface of the sand/ silt sediment.

Shortly after we got the divers out of the water, Frits and John located another anomaly  by using a sidescan (a type of echo sounder) on the seabed a few hundred metres north of the large magnetic anomaly.

The echo was buoyed and a diver (me) sent down to carry out a brief ‘bounce’ dive to find out what was causing the echo. Although the echo appeared to show an interesting ship like shadow on the seabed, when I bounced down it turned out to be a peculiar shaped coral bommie.

After a somewhat disappointing day we recovered all the tapes, bouys and lines, and returned to SWII to prepare for sea and the trip down to Stanley Island in the Flinders Group.

Silentworld II left Eel Reef at 2100 last night and headed south for the Flinders Group ahead of the predicted southeasterly change.

Meanwhile, Frances Prentice (the Senior Librarian at the Vaughan Evans Research Centre at the Australian National Maritime Museum) had been very busy overnight and had found a whole lot of information on the wrecking of the ship Frederick on Stanley Island (one of five islands that make up the Flinders Group of islands) in September 1818. The 220 ton brig had been on a voyage from Hobart to Mauritius in 1818 with a cargo of 64 head of cattle when it was blown ashore in Wreck Bay – just east of Cape Flinders on Stanley Island.

Using the information supplied by Frances a shore party and a magging party left the anchorage on the western side of Cape Stanley this morning in an attempt to locate the wreck’s location.

Walking along the shoreline the team recorded various features which may have been associated with the wrecked ship whilst the ‘magging’ part surveyed Wreck Bay for possible magnetic anomalies.

After walking for some three kilometres, the shore party came over a steep rise to observe Frits and John ashore in Wreck Bay. After a steep descent the shore party (consisting of Xanthe, Gil, Jacqui, Greg, Andrew, Grant, Rick, Lee and I) joined them and searched the shores of the bay looking for any signs of the wreck. Although we had a low tide and lots of eyes searching the beach we could not find any sign of the wreck. Although we did disturb some juvenile bluespotted sting rays and a couple of moray eels feeding in the shallows.

Whilst all this was going on Glen appeared in the bay in the Caribe coming to pick us up and save us the three and bit kilometre walk back to the anchorage. However, upon observing a large, yellow, reptilian shape in the shallows he suggested that rather than walk out to the boat it might be better if we went back over the rise and get picked up in the next bay around.

Once we joined up with John and Frits they told us they had located an anomaly in the middle of Wreck Bay which may be worth exploring.

Returning to SWII we decided – given the possibility of crocodiles in the bay – we would use the Remote Operated Vehicle (ROV) provided by the Silentworld Foundation to check out the anomaly. But upon returning to the bay, the team found that the predicted southeasterly change had come in and the once calm bay was now a sea of white caps forced up by the 30+ knots winds. Although we deployed the ROV, conditions above and below the water were far from ideal and we made a strategic withdrawal to reconsider out options.

Check out the Silentworld Foundation expedition blog for more details of the trip.