Woke up this morning to a very empty anchorage at the back of Ferguson Reef – with Silentworld II (SWII) and the Hydro-sport dive tender having left for Portland Roads at 0330 this morning – leaving a much reduced crew (Xanthe, Andrew, Grant, Freddy and I) on board Hellraiser 2 to check out the last remaining anomalies and take the last measurements before cleaning up the site and sailing westward to meet the larger team at Eel Reef, and hopefully the wreck of the Indian-built opium clipper Morning Star wrecked three miles south west of Quoin Island in 1814.

With a much smaller team to get ready we got to the outer edge of Ferguson Reef and the wrecksite of the Ferguson in plenty of time for the high water slack.

Xanthe, Grant and Andrew from the Silentworld Foundation and I jumped in just to the seaward of the ‘picked in’ anchor and allowed the last few minutes of the floodtide to carry us in over the reef top and along the stud link anchor chain which runs back over the top of the reef for some 200 metres before ending amongst flat plate and staghorn coral. 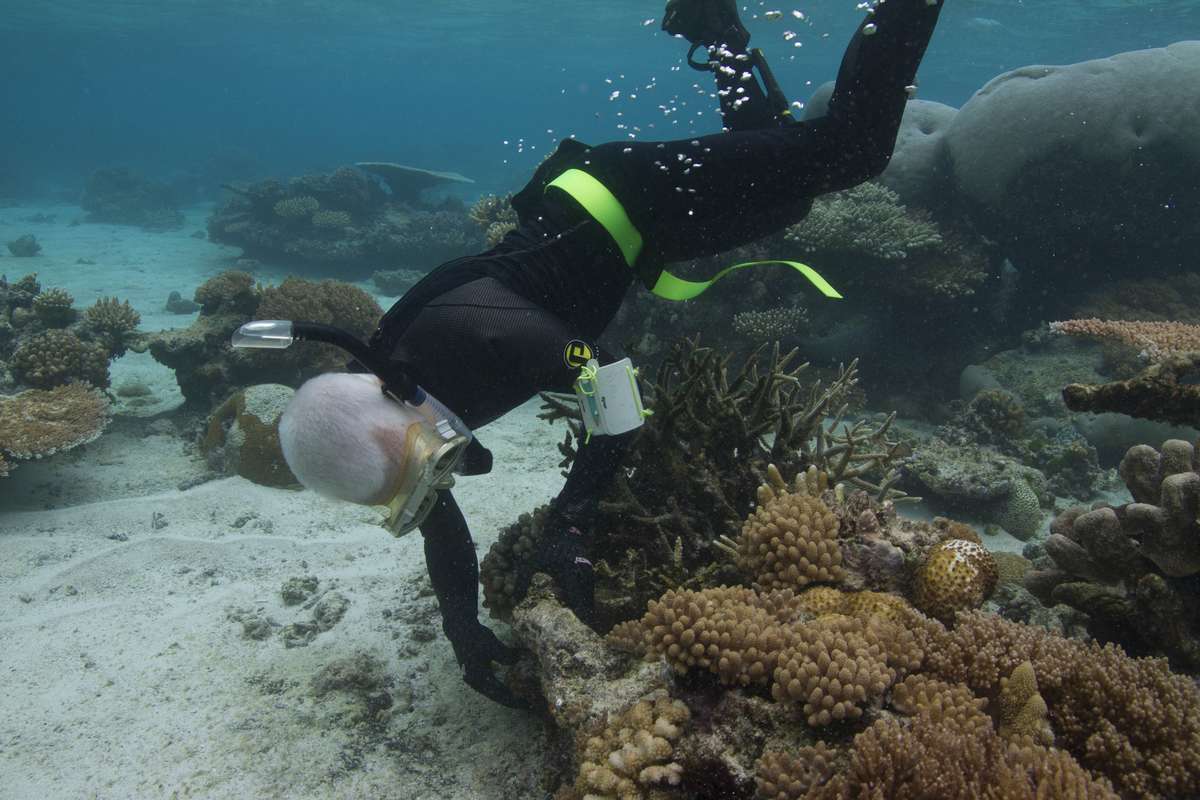 The objectives of the dive were to follow the anchor chain – metal detecting on either side of it – in an effort to locate additional information on the origins of the chain. The team located additional copper fastenings and isolated iron concretions in the vicinity of the chain and the nature of the material seem to indicate that it predated that of the Ferguson. 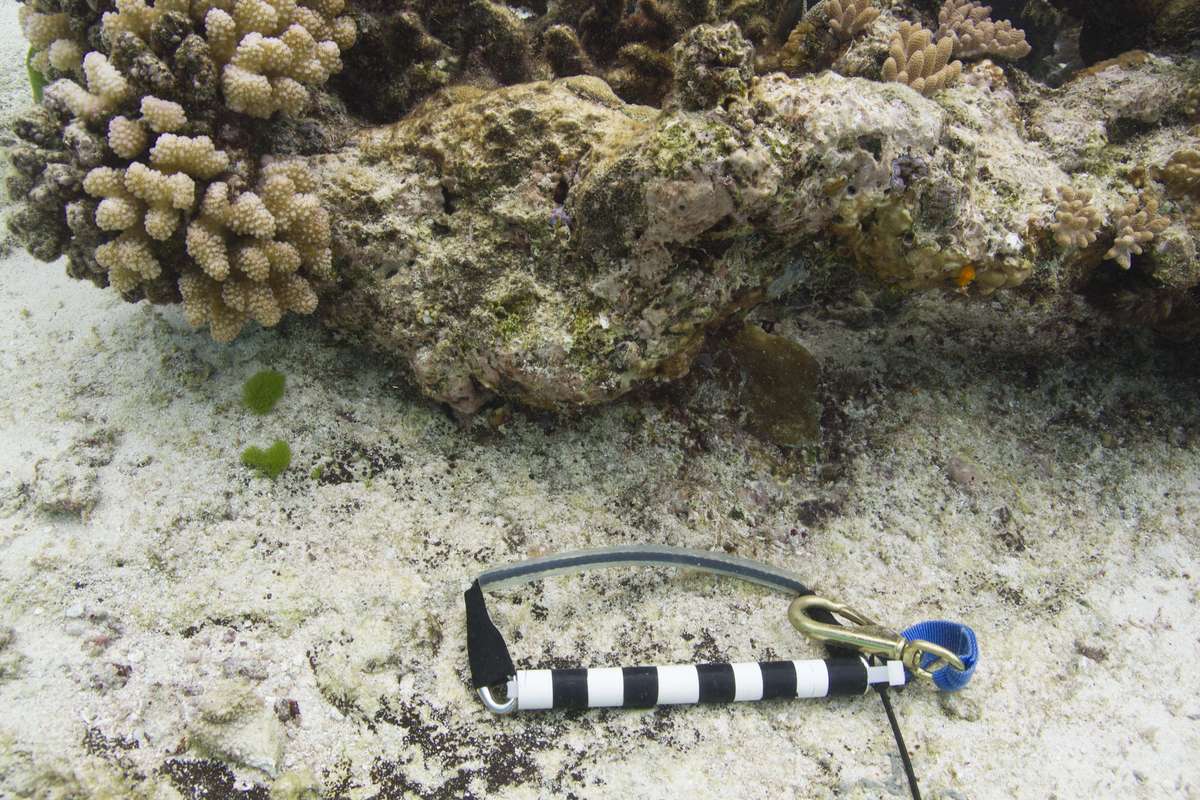 In the early afternoon Xanthe, Freddy, Andrew, and I checked out a series of magnetic anomalies previously located by Frits and John. The anomalies were buoyed off and we entered the water conducting circular sweeps of the area using metal detectors. 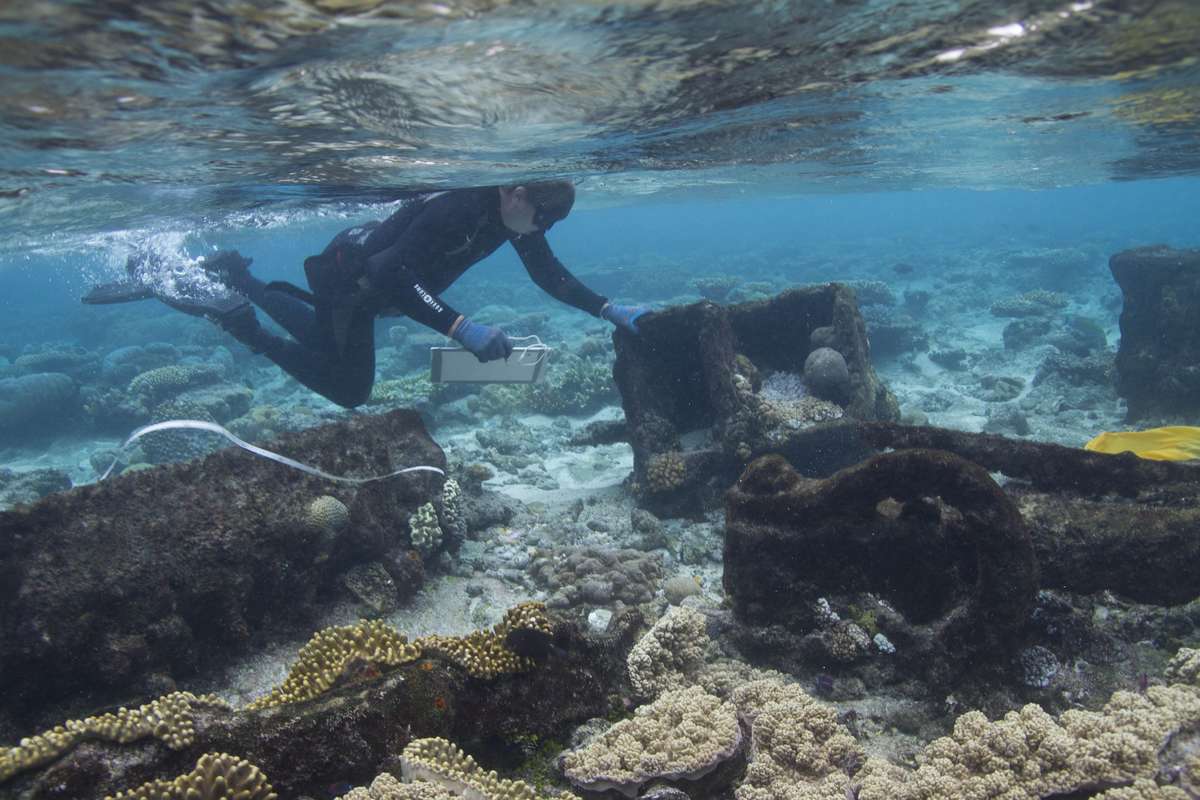 Mystery stove at the Ferguson site.

Whilst we did not record any sub-surface deposits we did notice that many of the bommies in the area had been swept clean of coral – probably due to recent cyclonic activity in the area – exposing the underlying substrate which may have produced the different magnetic signature detected by the magnetometer.

Following the dives, the team returned to Steve and Sparra, the crew on board Hellraiser 2 and prepared for sea. We leaft Ferguson Reef and the wreck of the Fergus(s)on and headed for Eel Reef and hopefully the wrecksite of the Morning Star.

Easter Sunday – Hellraiser 2 arrived late last night and moored up behind SWII (the main expedition vessel provided by the Silentworld Foundation) which was anchored just to the east of the shipping channel known as the ‘Inner Route’ which had been pioneered by Phillip Parker King and the crew of HMCS Mermaid and the HMCS Bathurst in 1816-19.

The plan for the morning was relatively straight forward – follow the directions of the various eyewitnesses to the wreck of the Morning Star and locate the site – however looking for a shipwreck is hardly ever that easy. Some of the eyewitness accounts were obscure in the detail – with one stating that the wreck was south of Forbes Island (a largish island group eight or so miles north of Eel Reef) and another saying that it was three miles south, west of Quoin Island (a small single island some six or so miles east of Eel Reef). Phillip Parker King confused the issue even further stating that the wreck occurred in the vicinity of the Fison Reefs (an ill-defined reef system consisting of isolated coral patches and bommies lying between Quoin Island and Eel Reef).

After looking at the archival information and then comparing the modern charts for the area with those produced by Matthew Flinders’s in 1801-1803 (the only charts of the area available in 1814) we decided to concentrate our search on the eastern edge of Eel Reef and Fison Reefs.

The team was split into three groups with Frits and John (CEO of the Silentworld Foundation) braving the short, sharp surface chop coming over the reef in Maggie; Jacqui, Xanthe, Andrew, Grant, Rick and Glen in the Hydro-sport following Maggie and diving on any anomalies detected by Frits and John.

I was in the third group along with Gil, Greg, Lee and Freddy. We targeted some interesting areas located the day before by Frits and John when they carried out a brief reconnoitre of the reef.

Despite numerous hits and lots of snorkelling and diving on anomalies nothing of any substance was located after almost twelve hours work on the reef.