This morning the weather conditions appeared to be improving on yesterday’s so we sent off four teams to work on the Ferguson site.

Team One consisting of Frits and John dove on a series of magnetic anomalies off the south western side of Ferguson Reef, Gil and Greg in Team Two measured up an anchor at the northern part of the site, Peter and Jacqui in Team Three measured a ‘flat’ anchor and Grant and Andrew in Team Four measured an anchor in the surf zone. Whilst all this was going on Xanthe took photographs of the work in progress and I monitored the work from the surface whilst taking part in an open classroom discussion via telephone through the DART virtual excursion program of the NSW Department of Education.

As the teams returned from the wrecksite the whole area was struck by a series of rain squalls drenching everyone – well at least it saved us the job of washing the dive gear.

After lunch, sea conditions appeared to have quietened down once again and in almost perfect conditions we set off to dive on the site. Gil, Greg and I went to measure the length of a stud link anchor chain that was attached to a ‘picked in’ anchor. Peter and Jacqui jumped in to measure up the various iron knees, assisted by Andrew, John and Frits armed with metal detectors they commenced a non-disturbance metal detector survey of the site to find out ‘what lies beneath’. 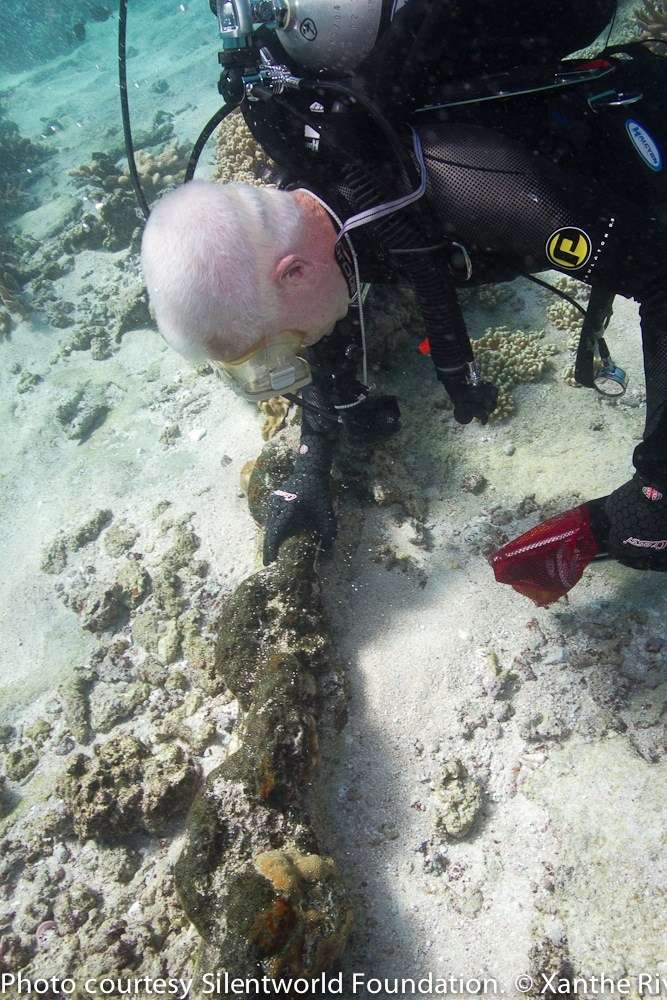 Kieran with an anchor chain

Despite the best laid plans and although the tide tables indicated we should still be in the period of slack water at the top of the Flood Tide, the tide was still coursing in. Jumping in, Greg stated it was like trying to swim upstream in a fast flowing river. We eventually got on site, but snagged tapes and the constant struggle with the tide prevented some of the tasks being carried out.

Hopefully we will have better luck tomorrow.

Early start for most of the team this morning as Hellraiser 2 had to be offsite early to take Peter Illidge to the airport at Lockhart River via the small harbour of Portland Roads to allow him to catch his flight to Cairns.

Hellraiser would return to Mantis Reef with two new divers, Lee Graham from the Australian National Maritime Museum and Rick Assender from the Silentworld Foundation along with fresh veggies and a new compressor and generator to replace the one on Silentworld II which had stopped working on Monday afternoon.

This morning we planned to have three dive teams in the water to continue surveying the wrecksite. The first team consisting of John, Gil and Greg were to plot and survey in the vicinity of the stud link anchor chain to try and determine its length back from the ‘picked in’ anchor. The second team, consisting of Grant and Andrew, were to search the area south-west of the anchor cluster for any signs of the ship’s rudder components. The third team comprising Jacqui and myself were to measure and plot the anchor cluster, whilst Xanthe was to take photographs of the activities whilst Frits as Dive Master for the dive was to monitor progress.

Unfortunately when the team arrived on site there was a very strong ebb over the wreck which threatened to drag all the divers over the eastern side of Frederick Reef and out into the Coral Sea. To make conditions worse, no sooner had we arrived, a series of rain squalls passed over the reef reducing above water visibility considerable.

The team waited in the small boats for an hour and half before it was safe for the divers to enter the water – all the tasks were safely completed and the team returned to Silentworld II  just as another series of wind and rain squalls hit the reef.

After lunch the squalls continued to develop and diving was called off for the rest of the day.

Things were going no easier for the crew at Portland Roads – the squalls coming over Ferguson Reef had continued onto the mainland, delaying the arrival of the plane carrying Rick and washing out the road between the airport and Portland Roads. Eventually Rick and Lee managed to get to Portland Roads and board Hellraiser 2, but they didn’t arrive back at Mantis Reef until 1140 that night.