Before departing Lizard Island this morning the team took advantage of the early start by climbing Cook’s Look the iconic hill on Lizard Island. The same hill climbed by Lieutenant James Cook and some of the crew of HMB Endeavour in 1770 shortly after that vessel had run aground on a coral patch now known as Endeavour Reef, south of Lizard Island. Cook used this vantage spot to find his way out of the ‘labyrinth’ which had so nearly claimed his vessel. 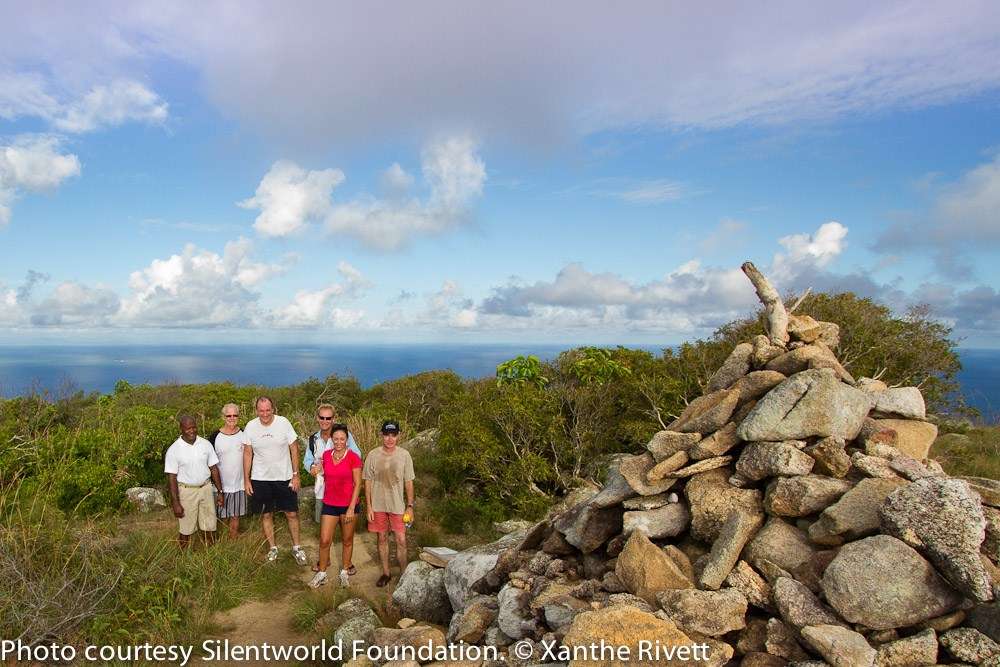 After climbing Cook’s Look our expedition vessels departed Lizard Island bound for the Flinders Group, 50 or so miles north.

After a smooth passage the two vessels anchored in the channel between the cluster of islands that make up the Flinders Group just south and east of Princess Charlotte Bay. In March 1899 a cyclone destroyed a pearling fleet anchored in the Bay, with the loss of over 400 lives including at least 100 local Aboriginal people who were swept away and drowned as the result of a huge tidal surge associated with the cyclone.

Shortly after that cyclone HMS Dart visited the area to carry out an extensive hydrographic survey of the Bay and its surrounds – during the stay at the Bay the crew of the Dart recorded their visit on the southern shore of Flinders Island by carving the name of their ship ‘HMS Dart 1899’ along with a Broad Arrow into a prominent rock between two fresh water soaks or wells.

Our team motored to the beach and scrambled speedily ashore keeping a wary out to sea and shore for any signs of crocodile. Under the guidance of Peter Illidge – who had visited the area more than twenty years before – we walked along the beach and behind the back of the mangroves and quickly located the Dart engraving. 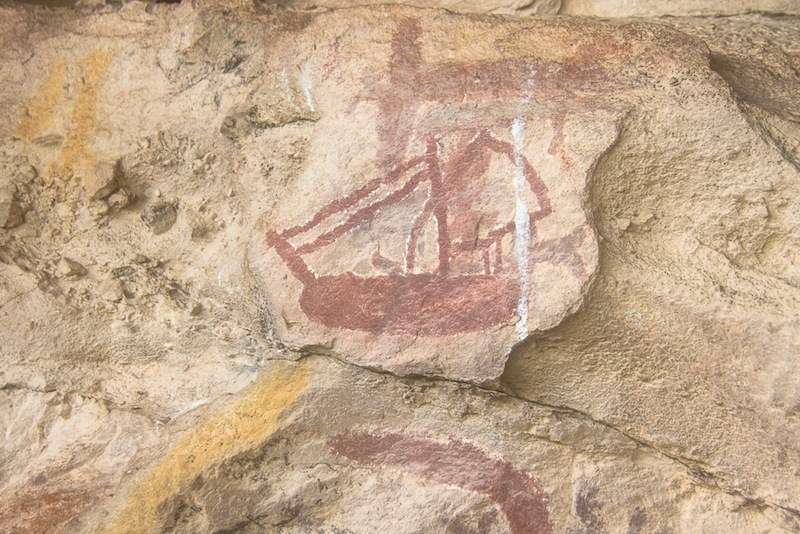 Before leaving the Flinders Group the team visited a series of Aboriginal rock engravings on Stanley or Yindayin Island – where from their vantage spot high on the cliffs of the island the local Aboriginal people, the Yiithuwawra, recorded the passing of single masted prows and cutters, two masted brigs, three masted ships and fully rigged four master barques in red ochre on the walls of their rock shelters. One of the vessels recorded may well be the wooden, 210 ship Frederick which was wrecked on the northern most island of the Flinders Group on a passage to Mauritius with cattle from Hobart in 1818.

Returning to the boats our team again headed north this time aiming for Tijou Reef on the Outer Edge of the Great Barrier Reef. Tijou Reef will not only provide a relatively safe anchorage for the night but also give the team an opportunity to test the waters – so to speak – by carrying out a short series of snorkel dives from the various dive tenders. This will not only get the team use to diving out of small boats again, but will also give them the opportunity to explore a reef which has been rumoured to contain rock ledges and caves which had been inhabited by Aboriginal people prior to the inundation of this particular section of coast thousands of years ago.

This morning the team left Tijou at 0500 in order to get into Ferguson Reef by 1130 and the start of the expedition proper.

At 1130 both vessels arrived on station on the western side of Ferguson Reef almost directly inshore from a 650m by 250m deep water lagoon in the centre of the Reef. It was on the northern edge of the Lagoon that John Mullen the CEO of the Silentworld Foundation had first seen signs of a shipwreck whilst diving in the Lagoon some 15 years ago and where Ben Cropp – a well-known north Queensland diver – had located a ship’s anchor as well as badges, belt buckles and gun parts associated with the 50th Regiment of Foot – a detachment of which were on the Ferguson when it was wrecked on the reef in 1841.

After the Caribe and Maggie (the Silentworld Foundation’s purpose built magnetometer boat) were unloaded from the top deck of Silentworld II and in the water the dive team were briefed on safety procedures and potential dive hazards on site such as tide, currents, surf and stone fish before carrying out a series of site ‘famils’ on the western side of the reef.

Whilst  the first series of famils were taking place John, Frits and Grant set up the magnetometer in the largest of the three dive tenders and proceeded to circumnavigate Ferguson Reef with the aim of providing a ‘mud map’ of the reef and comparing it with the existing navigation charts.

On previous trips the team had encountered a number of problems with magnetometers – towed instruments which detected changes in the worlds magnetic fields caused by such items as iron cannon, anchors and anchor chain – but with Frits on board to manage the instruments and crunch the data things went very smoothly until the charger powering the laptop refused to cooperate and the laptop went flat. After a quick trip back to the boat for a new charger the team set off once again to map the reef.

In the afternoon – Frits and John took to Maggie the smallest of the three dive tenders to mag the lagoon in the centre of the Reef. Maggie was a small, shallow drafted boat that had been purpose built to either carry the magnetometer on a pole suspended from the bow, or towed by a sled or deployed normally off the back of the boat – as the vessel would be required to work right on top of the reef it was also powered by a waterjet rather than by a propeller.

While this was going on the dive teams investigated a large black object which had been appearing spasmodically in the surf line – on closer investigation this turned out to be a large iron anchor with distinctive palms and a iron stock, close to the anchor the also located a small wooden pulley sheave and several copper alloy fastenings. 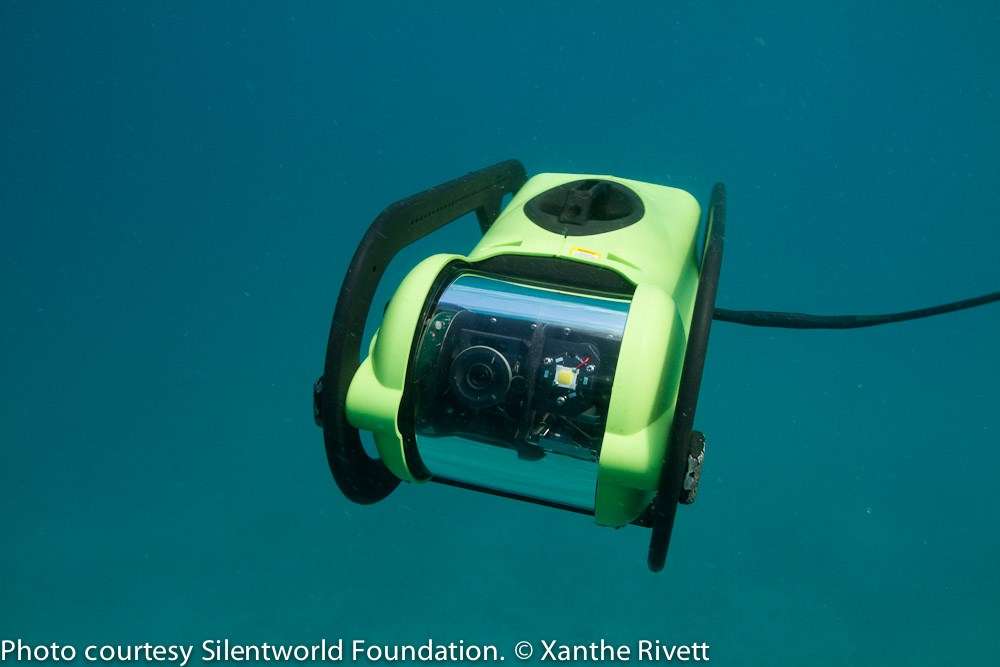 ROV or remotely operated vechile that is used during the expedition.

Over the last couple of days the sea and swell from the south-east has been gradually building and this morning as it approached high tide we could hear the waves crashing onto the outer edge of Ferguson Reef. Due to the surf the teams could not investigate the areas around the anchor, instead they concentrated on the reef flats on the north eastern and north western ends of the lagoon, locating several iron rigging components along with more hull fastenings.

The Mag Team was also busy – going back and remapping several large anomalies on the southern, south-western and north-western sides of Ferguson Reef and when conditions were suitable the area between the surf break and the lagoon.

The hits were so large and consistent that we decided to send in a team of divers to investigate two particular anomalies – one of which was in 30 metres of water whilst the other was in 12 to 20 metres of water.

Armed with metal detectors and surface maker buoys and closely watched by observers on board the dive tenders and Silentworld II – the three teams entered the water which by now was working itself into quite a steep surface chop which was occasionally pushed back down by rain squalls coming in from the north-west. Despite intensive searching the teams did not locate the source of the significant anomalies. Oh well, there is always tomorrow.