Our maritime archaeology team were set for a three week expedition to Ferguson Reef, off the coast of north Queensland to locate and survey shipwrecks Ferguson and Morning Star until the forces of nature threw some obstacles in their way – a couple of cyclones to be exact! Here, Kieran Hosty our maritime archaeology manager brings us up to speed with the expedition, the cyclones and the new plan.

We’ll be posting more of Kieran’s updates as the expedition continues, so keep an eye out.

Over the last week or so a number of factors have come into play which forced the Silentworld Foundation and the Australian National Maritime Museum to cancel or at best postpone the proposed Ferguson Reef Project.

Towards the end of last week a tropical low developed in the Gulf of Carpentaria and over last weekend formed into Severe Tropical Cyclone Sandra. Whilst TC Sandra has not caused any damage to the Queensland coast the formation of the cyclone in the Coral Sea has prevented one of the expedition vessel’s Nimrod Explorer from reaching Cairns from the Solomon Islands where it had been engaged in charter work. Cyclone Sandra has also whipped up the seas between Sydney and Cairns delaying the arrival of the second expedition vessel Silentworld II.

Unusually, a second tropical low has now developed in the Gulf of Carpentaria and is predicted to form into Tropical Cyclone Tim once it passes over Cape York Peninsular. Unlike Sandra this cyclone is predicted to travel down the Queensland coast and eventually cross the coast somewhere south of Cairns.

Despite the best efforts of the Silentworld Foundation it looks like the expedition will have no vessels available  – and the proposed departure date  from Cairns of the 17 March will to have be pushed back or the expedition cancelled for the present.

Opened my email this morning and found a fantastic message from John Mullen the CEO of the Silentworld Foundation – a heroic effort by Captain Michael Gooding and the crew of Silentworld II has seen the vessel safely arrived in Cairns – even better the Foundation has tracked down another charter vessel in Cairns, Hellraiser 2, which is available for charter and also has sufficient range to reach Ferguson Reef which is two and half days sail north of Cairns.

The expedition is back on BUT the second vessel is much smaller than Nimrod Explorer and doesn’t have the accommodation facilities or the licence to carry all of the proposed team. So unfortunately we have had to trim the team back considerably – in fact I will be the only museum person on board for the first half of the trip.

Now the frantic planning begins – flights rearranged, permit issuers informed of the change of vessel and family told that I in fact will still be going away.

Left Sydney this morning weighed down with permits, research files, GPS units, VHF radios, waterproof keyboards, new Toughbook – all the stuff that did not make the first initial packing and sending of three pallet loads of dive gear, magnetometers, metal detectors,  buoys, lines, oxygen and other bits of assorted medical equipment up to Cairns in early March. 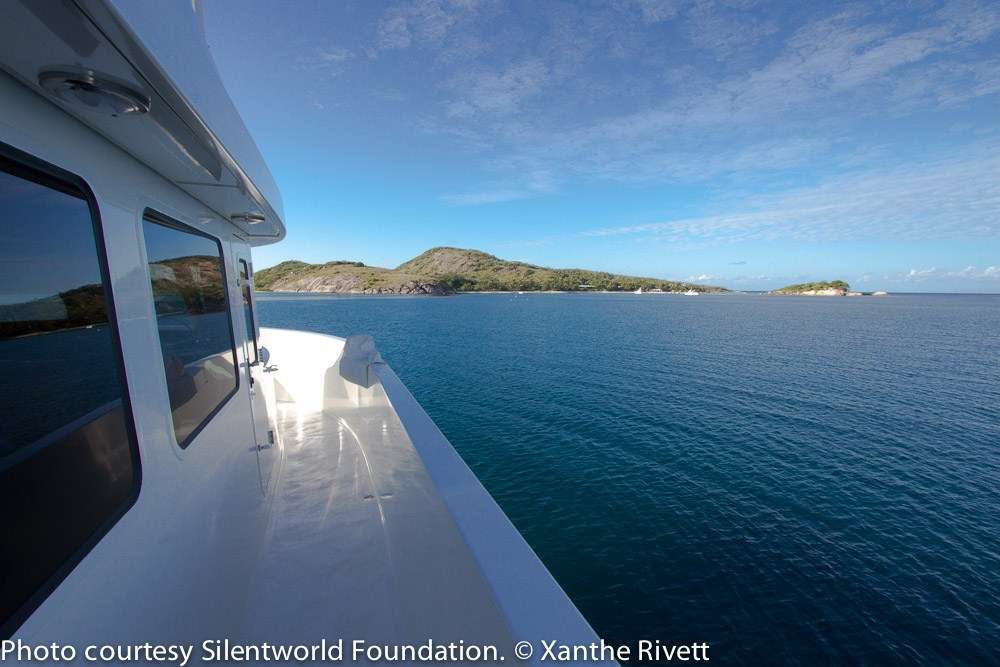 Arrived at Cairns and met up with other members of the Silentworld Foundation who are joining us for what will now be a preliminary exploration of Ferguson Reef. Some of the team members are familiar faces including John and Jacqui Mullen, Xanthe Rivett, Peter Illidge, Grant Bowering and Andrew Turner, and others like Frits Breuseker from Seasee Pty Ltd who will be running the survey equipment for the team and Gil Burrows and Greg Lucas are with us for the first time.

From Cairns the team flew north over the outer reef to Lizard Island and met up with the crews of Silentworld II and Hellraiser 2 which had arrived at the Island earlier that morning.