Our education team recently caught up with Kieran Hosty, the museum’s manager of maritime archaeology, to find out more about his job and upcoming expedition to Ferguson Reef, off the coast Queensland. 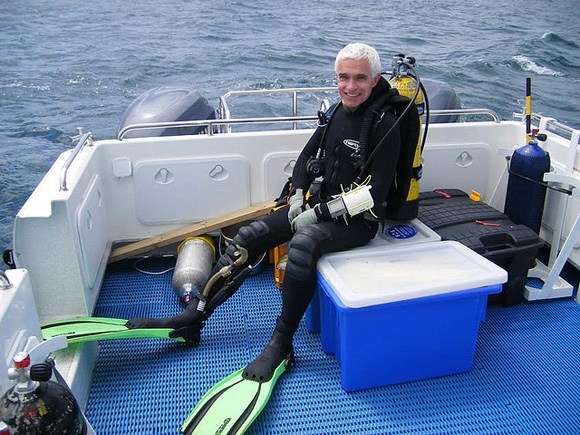 What does your role at the museum involve?

Over the last 12 months my position at the museum has changed from that of a curator with a primary responsibility of managing a collection to that of full time manager of the museum’s expanding maritime archaeology program. When I was a curator I was responsible for immigration, ship technologies and marine archaeology. My work includes research, documentation, site survey and assessment of underwater cultural heritage, along with museum exhibition concept, design and installation.

What qualifications and background do you need for this type of work?

After 18 months as an archaeological field volunteer I took up a position with the Maritime Archaeology Unit at the Victoria Archaeological Survey. I was the Commonwealth Historic Shipwrecks Officer in Victoria for six years before coming to the Australian National Maritime Museum in 1994 to take up the position of curator of maritime archaeology and ship technology. At the museum I was responsible for the museum’s maritime archaeology program as well as curating the museum’s collection relating to convicts, 19th century migrants and ship technology. My expertise in convict related material was further enhanced, when I took up a temporary position as curator/ manager of Hyde Park Barracks Museum for 18 months in 2004, followed by a further 18 month contract at the Barracks where I put together an exhibition on the history and archaeology of convict hulks.

I have worked on many maritime archaeological projects both in Australia and overseas, including the survey and excavation of the Sydney Cove (1797), HMS Pandora (1791) and HMCS Mermaid (1829), and the hunt for Cook’s Endeavour in the USA.

I am the author of the book Dunbar 1857: Disaster on our doorstep which has just been published by the museum, along with two children’s books on Australian convicts and 19th century migrants published by McMillan.

Describe a typical day in your job.

It is usually a mixed bag, and currently more so, due to the transition between my old and new roles. I am looking after the Age of Sail gallery and public enquiries, as well as acquisitions not yet processed. I am evaluating existing programs and looking for partnerships and collaborations. I am also planning the Ferguson Reef expedition.

What is the most interesting and rewarding part of your job?

How do you work with the education section of the museum?

Maritime archaeology sells itself easily. I started working with education staff from the beginning, developing workshops to raise the profile of the importance of maritime history and archaeology, what it entails and how we can preserve it. I work with them on exhibition development, publications, internships, web resources and social media.

What will your next marine archaeology expedition involve?

In March and April we are further exploring the Anglo/ Australian/ Indian connection on Ferguson Reef off the Queensland coast, in partnership with Silentworld Foundation.  Down the track it may be good to also reopen some other sites from a new perspective.

The Ferguson Reef expedition will take place from 17 March – 6 April. The expedition team will post daily blog updates during the expedition, so if you haven’t subscribed to our blog yet, now’s the time! You can subscribe via email (head to the homepage of our blog and enter your email at the top right) or via RSS or if you have a WordPress account, simply click follow.

You may also like to visit the museum to see our latest exhibition Wrecks and Reefs, open until 2 April.