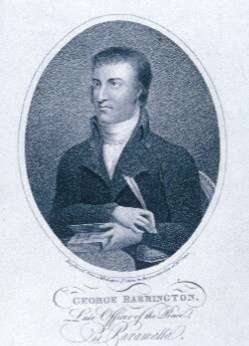 Detail from a portrait of George Barrington (1803)
ANMM Collection

Everyone loves a good convict story, and George Barrington’s chequered life of misdeeds, ‘dissipation and licentiousness’ fails to disappoint. A real life ‘Artful Dodger’, Barrington remains one of the most notorious convicts in history. He also played a role in one of the greatest literary frauds, a myth that perpetuates to this day.

George Barrington was born around 1755 near Dublin, Ireland. It seems that his troubled past began quite early when, at the age of just 16, he fled his school after stabbing another boy with a penknife and stealing money and a gold watch from the headmaster. He then, as the saying goes, ‘fell in with the wrong crowd’ and joined a group of local players, who made their money swindling and pickpocketing unsuspecting victims. The group’s leader, John Price, taught the new apprentice the art of pickpocketing. In the early 1770s, Price and Barrington moved to London as partners in crime. Price was subsequently arrested in 1773 and sentenced to transportation to America.

Barrington fast became a notorious thief and focussed his attentions on various theatre hotspots in London, including Drury Lane. The ‘prince of rogues’ posed as a gentleman, led a lavish lifestyle and made friends with London’s influential people as he picked their pockets. In the first text falsely attributed to Barrington, A Voyage to Botany Bay (1795), the introduction lists his most famous crimes. He once posed as a clergyman, pickpocketed members of the English Court and managed to cut the diamonds off the clothing of a Knight of the Garter, completely unobserved. In 1775, he was caught stealing from the Russian Count Orlov. The target was a snuff-box encrusted with diamonds worth £30,000 (around £3.7 million in 2011). 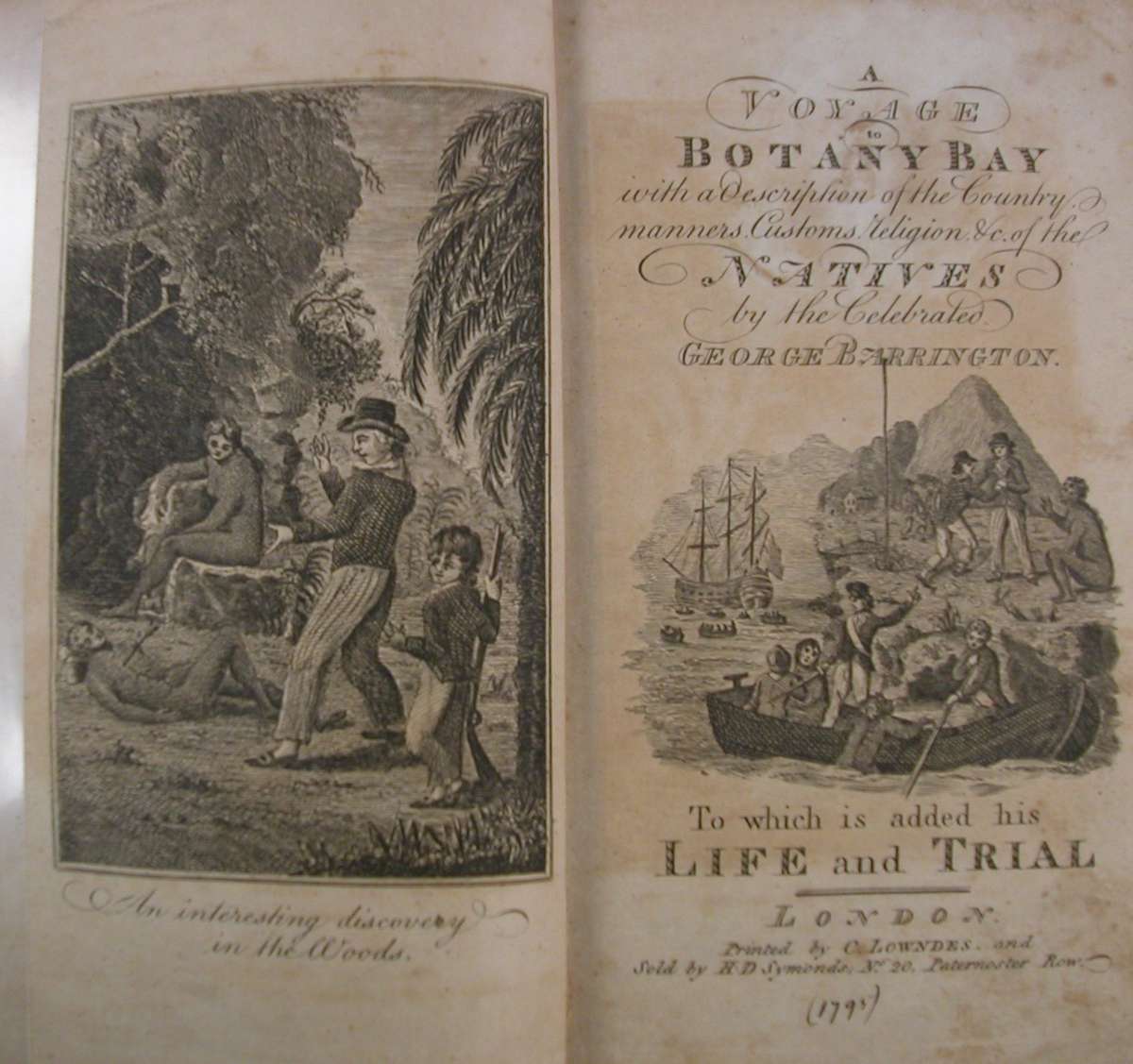 Over the 1770s, Barrington was arrested numerous times, but his charm and clever oratorical skills consistently ensured that justice was never fully carried out. Consequently, he would often serve only part of his sentence on the prison hulks at Woolwich before being released early. Despite his charm, however, on 15 September 1790 he was tried at the Old Bailey (Central Criminal Court in London) for stealing a gold watch and chain belonging to Henry Hare Townsend Esquire, at Enfield racecourse. He rose to the occasion yet again, putting on a courtroom performance that allegedly brought the jury to tears. He was handed a relatively lenient sentence of seven years transportation to New South Wales. 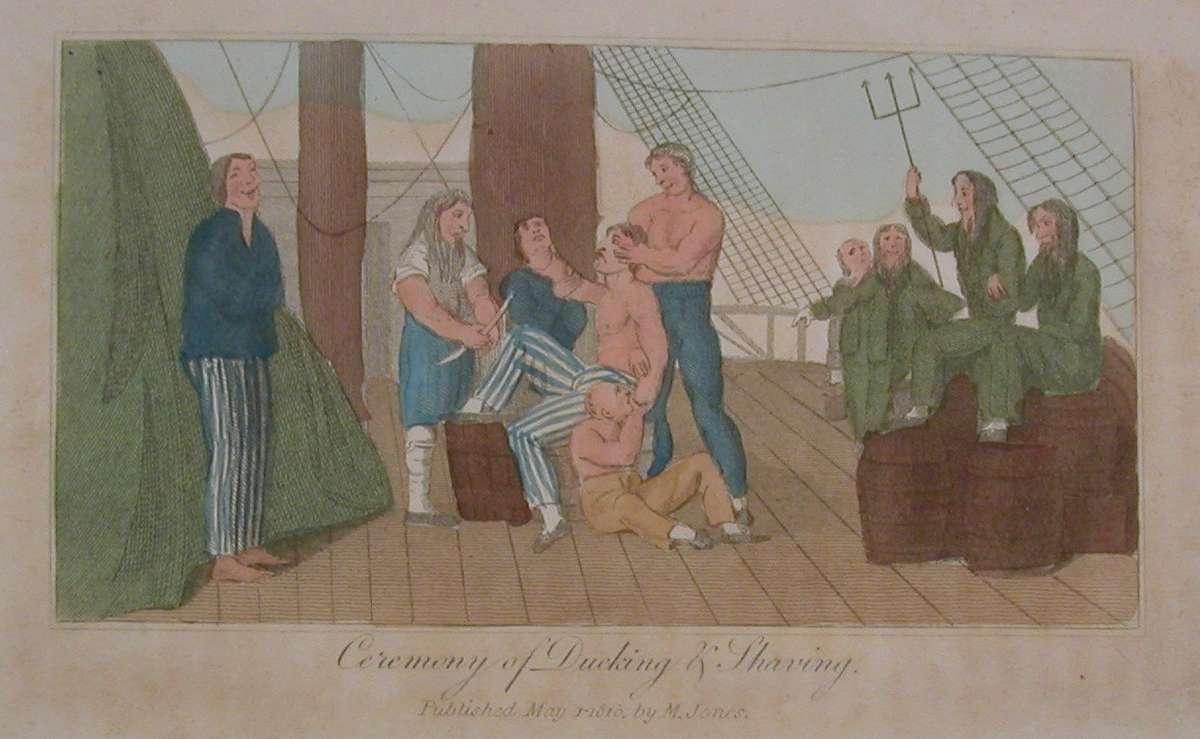 Detail from ‘Ceremony of Ducking and Shaving’ in An Account of A Voyage to New South Wales, attributed to George Barrington (1810)
ANMM Collection

Barrington was transported to Sydney in the supply ship Active and arrived in September 1791. He was sent to work on a farm at Toongabbie and after a year was given a conditional pardon and posted as a watch on the government supplies. He appeared to have given up his light-fingered ways and was granted a full pardon by Governor John Hunter and appointed chief constable in Parramatta in 1796. By 1800, however, Barrington was declared insane. He resigned his post and received a pension until his death on 27 December 1804.

There are various interesting objects in the collection that link to the infamous Barrington. Included is a copy of A Voyage to Botany Bay and illustrations depicting a ‘Ceremony of Ducking and Shaving’ from An Account of a Voyage to New South Wales. Another item in the collection is the broadside ballad, The Swaggering Man (first published around 1790), which is believed to have been based on Barrington’s exploits. There are some parallels to his story which can be discerned in the following extract:

When to the Royal Exchange I go,
I hear the merchants talking,
About business or other things,
As they the Change are walking
If a thirty purse or a gold watch,
Should by a slight of hand sir
Why then I’ll walk away sir
An’t I a swaggering man, sir.

When to the Old Bailey I did go
In order for my trial
With my beaver hat and morning gown,
I stood a flat denial
But now I am cast and condemn’d at last,
To die all on a gallows
The people cry as I pass by
Don’t hang the swaggering man sir.
~ The Swaggering Man (c 1790), ANMM Collection

Despite the fact that there is no solid evidence Barrington ever wrote the texts to which he is attributed, the ‘Prologue’ in The History of New South Wales (1802) he supposedly presented at the opening of the first colonial theatre in 1796 is one of the most celebrated pieces of convict literature. It is perhaps also a fitting way to end the story of the cleverest thief to grace the public imagination, in all his swaggering glory:

From distant climes, o’er widespread seas we come,
Though not with much éclat, or beat of drum.
True patriots all, for be it understood,
We left our country, for our country’s good…
~ ‘Prologue’ from The History of New South Wales (1802)