In a sea of faces, some worried, some jubilant, Private John Michael Hassett poses for a picture. It is October 1916, Melbourne, and Hassett and other members of his battalion are just about to board the troopship Nestor to leave for war. Hassett kneels in the front row, his hat turned to the side and his kit bag rolled forward to expose his name and service number. Perhaps he intended his name to be recorded when posing for the camera – perhaps not – however this is exactly what happened. 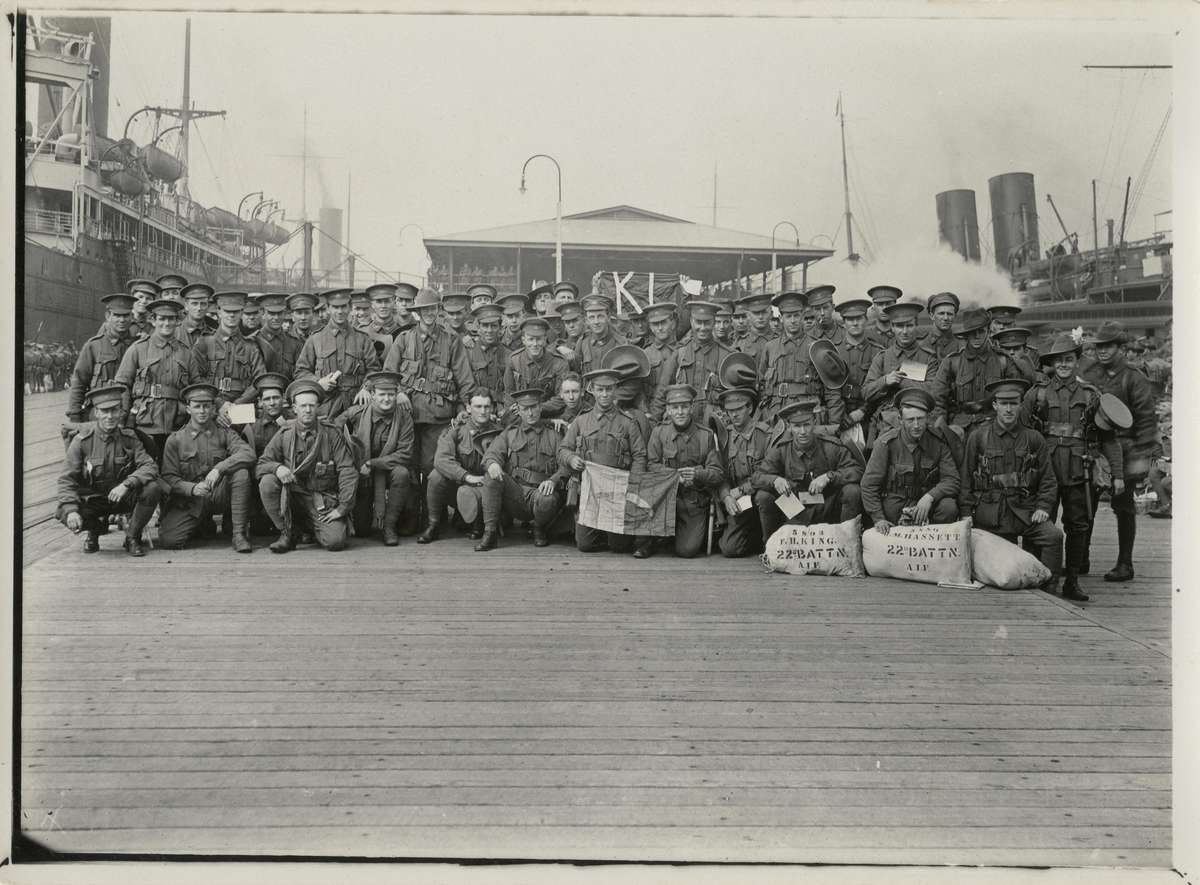 Digitised records from a number of different sources now make it possible for me, nearly 100 years later, to look at Hassett’s anxious face in this photograph – a young civilian now newly minted soldier – and uncover his fate.

In March 1916 Hassett is 29 and working as a hairdresser in Melbourne when he volunteers for service in the First World War. Signing his enlistment papers in Brunswick on 13 March, he informs the army that he is unmarried and that his mother Margaret has the honour of being his next of kin.

The embarkation roll for Hassett confirms that he left Melbourne on 2 October 1916, boarding the troopship HMAT Nestor as a member of the 22nd Infantry Battalion.

Hassett’s personal military record (digitised through the NAA) details his overseas service with bureaucratic sparseness. From Melbourne he disembarked at Plymouth, England, before moving out to France in February 1917 to join the 22nd Battalion in the field. The next entry, only the fourth or fifth on his casualty form is dated 3 May 1917 and reads:

However there is, of course, much more to the story of the day our soldier died.

From the time Hassett joined the 22nd Battalion in February to the day of his death his unit was stationed around Bullecourt in northern France where they were busy with patrols, training and a number of small actions.

The site of Bullecourt itself has since become synonymous with some of the heaviest fighting on the Western Front and it is a place etched into Australia’s military history. Hassett’s death in May of 1917 coincided with the spring campaigns that were swinging into action in the area after a harsh European winter. An extract from the 22nd Battalion unit diaries describes the icy conditions of February when Hassett joined the unit in the field and discusses the impending recommencement of fierce fighting in the coming months:

The land was gripped in an iron frost, and the shell-pitted region was no longer a sea but a field of ice many feet thick… The icy temperature was agonizing on feet and fingers, and although the long darkness broken only by vivid gun-flashes was unutterably wearisome – the prospect of a thaw was appalling. No one wanted a recurrence of Flers… (p7 February)

In the weeks that followed, both the Allied and German forces escalated their activities in preparation of a resumption of intense fighting. In March 1917, in the area around Bullecourt, the Germans withdrew to the Hindenburg Line in order to shorten and consolidate their defences before, on that fateful day – 3 May – the Second Battle of Bullecourt began.

The Official History of Australia in the war of 1914-1918 devotes two chapters to the Second Battle of Bullecourt, which was an Allied offensive aimed at securing the village, and opens with Charles Bean’s eloquent and eerie description of the first day of fighting:

On the British barrage opening, the troops fixed bayonets, which till then had been sheathed to avoid their flashing in the moonlight, and advanced… (Vol IV, chapter XII, p432)

The 22nd Battalion was one of many British and Empire forces involved in the battle and the unit diaries provide a record of the action from their perspective. Recorded in hastily written pencil, the entry for the 3 May features the all-important word: ZERO.

3.45am: ZERO. Under cover of barrage the attack commenced… The enemy barrage opened at 3.49am and a concentration of their shelling in that spot and very heavy machine gun fire kept the extreme left flank from reaching objectives…

The 22nd Battalion formed part of the 6th Brigade AIF whose records mention these particular objectives, and contain a map that demonstrates in detail the landscape of the battle in which Hassett was fighting: 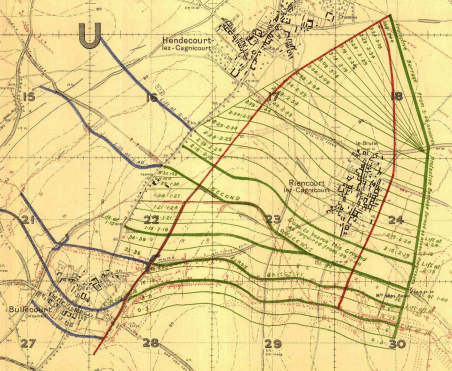 Part of a map from p11, Unit Diaries of the 6th Infantry Brigade AIF, May 1917, highlighting the village of Bullecourt (lower left) and the first and second objectives (thick green lines) of the 22nd Battalion on the 03.05.1917. Australian War Memorial Collection

From eyewitness reports contained in Hassett’s Red Cross Wounded and Missing file, (AWM) it seems that he was killed in the initial rush, before the first objective was reached (the second was attained at 5.25am according to the 22nd’s reports) or at around 10 am when the 6th Infantry Brigade reported heavy shelling. Certainly he did not live to see the end of the first day of fighting:

At Bullecourt on May 3rd 1917 about 10am I saw Pte Hassett hit by a piece of shell. He fell on the edge of a crater and whilst there was hit several times by machine gun bullets. I was in another shell crater about 10 yds away… Pte WJ Hayes

At some point on that first morning while the 22nd Battalion’s forces wavered between the first and second objectives, Hassett was killed. We can narrow the place of his death to somewhere around U23 c. or d. (the lower half of the square marked 23 in the map above). (For larger scale maps of the area see McMaster University’s WW1 map index.)

The Second Battle of Bullecourt concluded two weeks later on 17 May when the Germans withdrew. The Australian Imperial Force suffered 7,482 casualties, including John Michael Hassett. It was a costly win for the Allies.

Researching the lives of those who are no longer with us does often feel a little odd. It can give you the sensation of walking over a grave as you sift through details of their lives or examine their faces in photographs. However access to primary resources such as digital archives are an important form of commemoration as we uncover, discover and read stories like Hassett’s. If you happen to find yourself in France you might want to visit his grave, in the beautiful and well-kept Queant Road Cemetery – here are the details online (including a map of the plots). Or if you can’t make it to France, the hardworking people of the Commonwealth War Graves Photographic project have photographed Hassett’s headstone and made it available on their website. As for myself – I will be remembering Hassett this weekend when I place a poppy next to his name on the Roll of Honour at the Australian War Memorial. 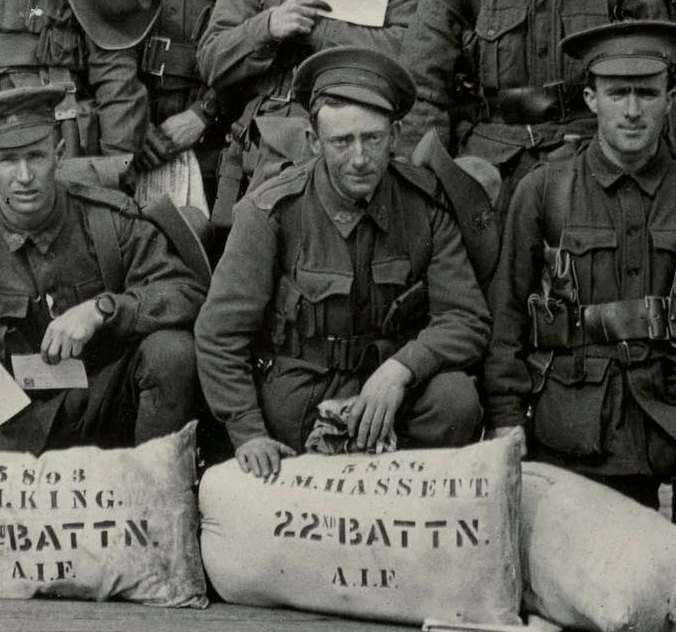