As a Librarian, my favourite job is cataloguing diaries written by sailors or passengers. Often these diaries are of a very personal nature, and I feel I’m being transported back to the 1800s.

One such diary is that of Captain Buttrey of the brig Dart, which sailed to the South Sea Islands in 1865 to collect bêche-de-mer and tortoise shells. It’s a wonderful diary, written, he says, for his wife and four boys, and “it is only intended for their eyes”. I love to picture him writing this diary to them, while he looks at their “likenesses” and imagines what they are doing at that moment. I was wondering whether these “likenesses” were drawings or photographs, as at one point he doubts the accuracy of the colour of his wife’s eyes. But later in the diary he mentions that his wife had to hold her breath when her likeness was taken, so they must have been hand-coloured photographs. 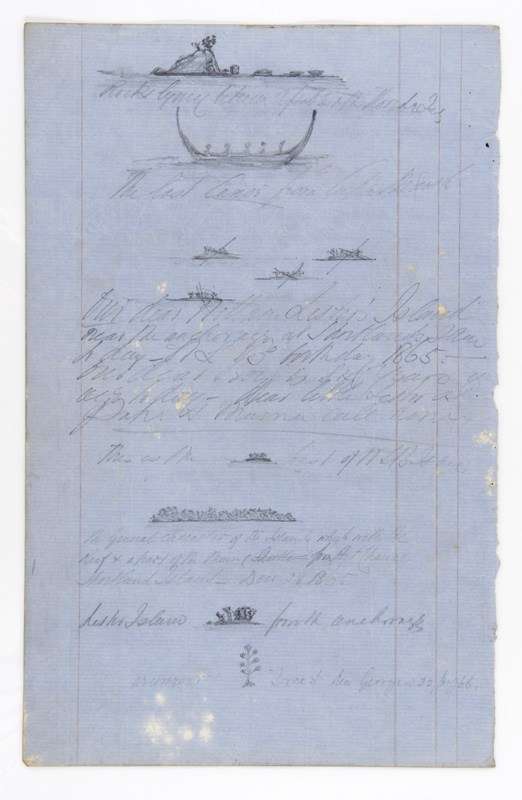 In the diary he mentions that he is collecting specimens for his “good friend the Curator of the Museum”. Detective work came into play when trying to establish which museum this was, and a search of the Trove database came up with an article from the Sydney Morning Herald listing the donations to the Australian Museum in January and February 1866, including reptiles, fishes, molluscs and crustacea from the South Sea Islands, donated by our Captain Buttrey – http://trove.nla.gov.au/ndp/del/article/13129338

His descriptions of the natives of the islands are fascinating – especially his observation of small children being given cigarettes to quieten them, and babies given pipes for the same reason.

He returned to Sydney as a passenger on the schooner Chance, all the way hoping to be home in time for his wife’s birthday, and he expresses the hope that the pilot will be able to drop him off near his home in Manly.

Further research found them moving to England in 1868; the family having expanded to 5 children, and another born in England, as shown in the 1871 census. He is listed there as “retired merchant”.

I’m sure when he sent his daily allocation of kisses to each of his children he never imagined a Librarian would be reading about it almost 150 years later.

View all posts by Guest→
Posted in: From the collection