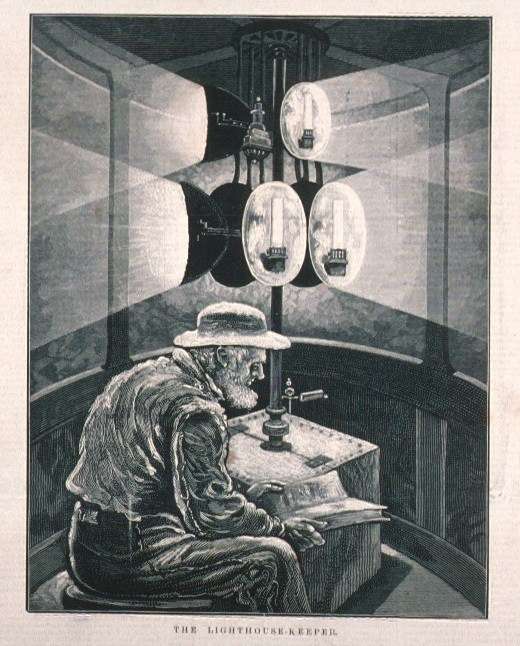 What was life like for a lighthouse keeper? I spotted this engraving, ‘The Lighthouse-Keeper’, which was published in the Australasian Sketcher in the 1880s. The sense of solitude and contemplation is striking and it occurred to me that there is often much emphasis on the lighthouse as a sturdy, dependable symbol of navigational safety, but less on the figure of the lighthouse keeper. Earlier this year, I wrote about the story of the ‘heroic maiden’, Grace Horsley Darling. It was only until I revisited her fascinating story that I realised she was able to rescue nine people after she spotted them from Longstone lighthouse. All accounts, paintings, ballads and poems written about her, seemed to view her connection to the lighthouse as an inherent part of her identity. This engraving and Grace’s story illustrate a common motif, one in which the lighthouse keeper is perpetually depicted as the silent, unwavering guardian of the seas.

Sheet music from the collection has captured the drama and tragedy associated with maritime disasters in a compelling way. The publication of music became a powerful medium of entertainment and social engagement in the 19th century, with its rise to prominence being demonstrated in recital halls and theatre shows. They parodied, sentimentalised and sensationalised events in a way that connected with audiences and validated romanticised notions of life at sea.

Grace Darling (c 1838) and Wrecker’s Daughter (1840) tell the story of a 23 year woman who rescued nine people from the wreck of SS Forfarshire, which sank near the Farne Islands off the coast of Northumberland in 1838. The colourful image on the cover of Wrecker’s Daughter depicts Grace near the bow of the little row boat with her father. She is holding an oar determinedly and fearlessly peering into the distance at the sinking vessel, despite the gale force winds. 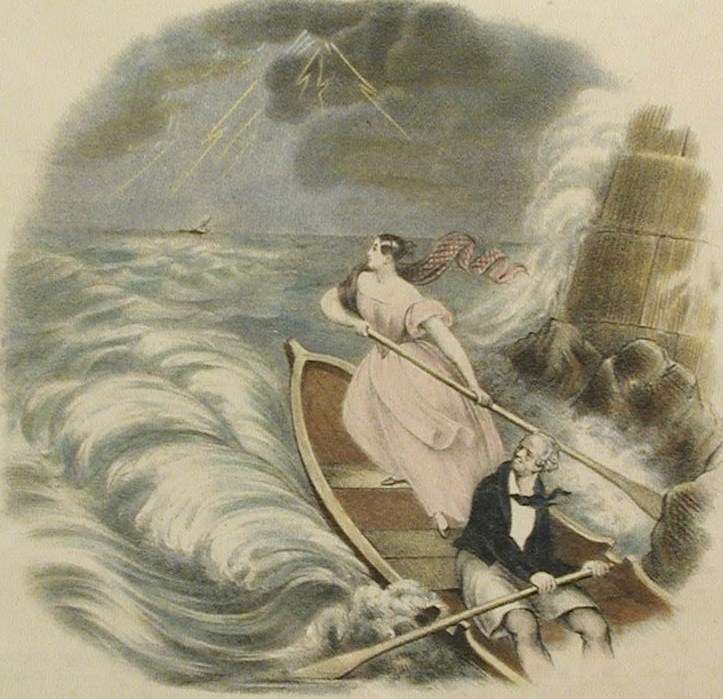 The ballad, Grace Darling, is even more dramatic: the sinking vessel appears oversized with Grace and her father, miniscule in comparison, depicted rowing near the lighthouse towards the desperate scene. This image is accompanied by the lyrics:

My gentle child! ‘Twere worse than madness
To tempt the billow this fearful night;
Again to sleep, to rest betake thee
Await, await the morning’s light.
I cannot sleep, their shrieks appall me
Oh! father, heard ye that piercing cry?
Arise, ye, hasten, the day is breaking
Look out, look out, a wreck I spy…

The boat is launch’d thro’ breakers roaring,
Like to some wild bird, the frail skiff flew.
That gentle girl, with love unshaken
Has saved from death that hapless crew…
~ Excerpt from Grace Darling, written and composed by George Linley 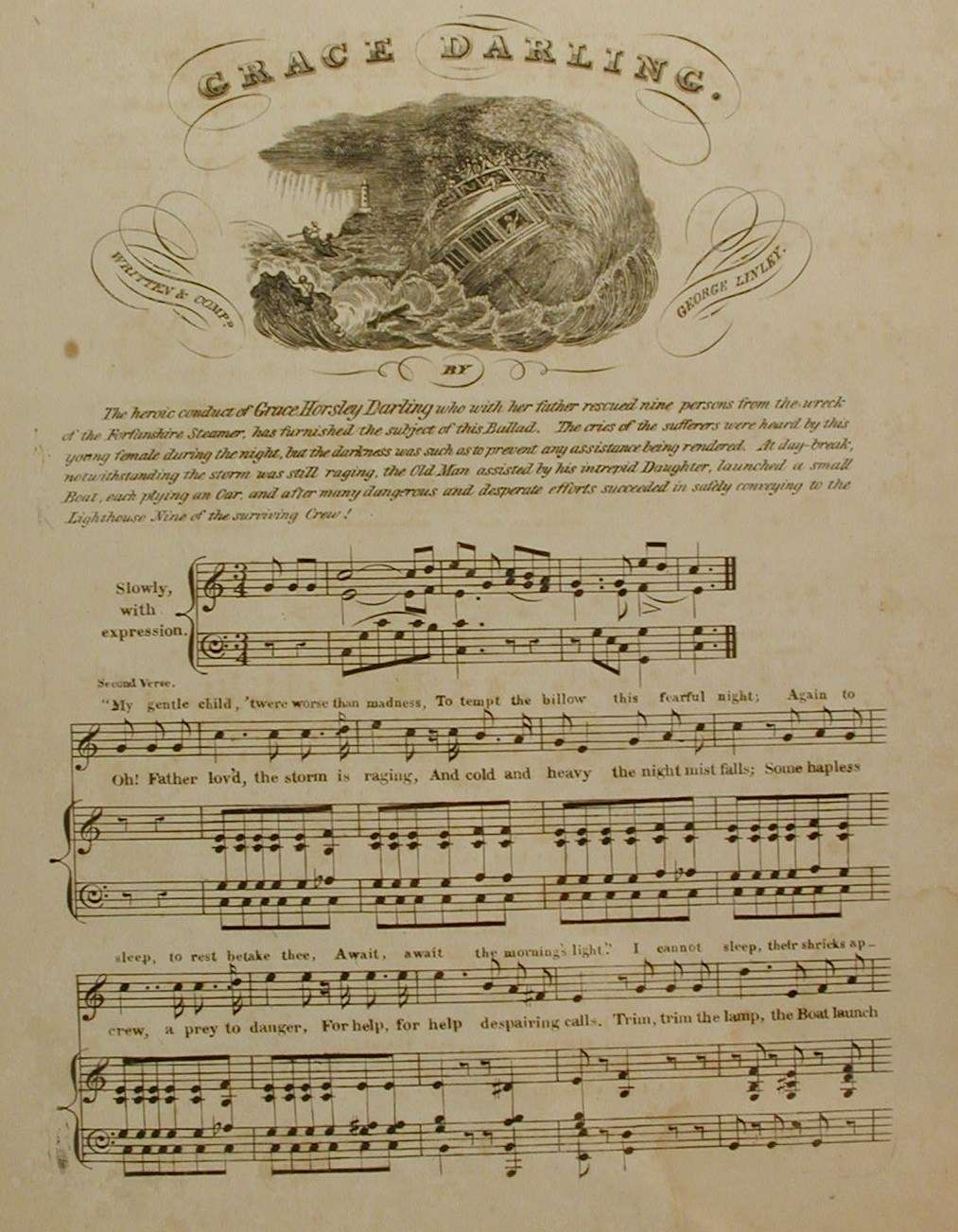 Aside from it being an extraordinary tale of survival against all odds, accounts of Grace and her rescue mission seemed to focus on her solitary existence as the daughter of a lighthouse keeper. In 1841, Charles Ellms spoke of her ‘noble heroism’ despite her ‘isolated abode’ in that ‘lonely spot in the middle of the ocean’. These words communicate the common stereotype of the rough-and-ready nature of seaside dwellers. Ellms’ description of meeting ‘the heroine’ after the disaster reads like something out of a romance novel: Grace was ‘high aloft, lighting the lamps, whose revolving illumination has warned so many an anxious mariner of the rocks and shoals around. At the side where we alighted, a bold cliff is to be ascended ere you reach the lighthouse.’ Ellms’ final comments seem to allude to these characteristics yet again, emphasising the enduring qualities of Grace’s story and how it evidently transcends the lighthouse itself:

…the name of Grace Darling is destined to live in story, long after the ponderous blocks of granite, which compose the Longstone lighthouse, have crumbled from their foundation, and been ground into sand by the attrition of the surrounding ocean. ~ Charles Ellms, The Tragedy of the Seas, 1841

These stories and images form a lasting impression of not just the importance of lighthouses, but the heroic deeds perpetrated by their keepers. There was an emphasis on the solitary nature of the lighthouse keeper as somehow being an intrinsic part of their character. Added to this was the fascination with their lifestyle and the constant interplay between light and darkness in both a tangible and metaphorical way. As the light from the lighthouse warned seafarers in the dark of the night, at the same time, the keeper shined through the darkness as a beacon of hope to those that needed it.

Help us celebrate International Lighthouse Weekend this Sunday 19 August at the museum. You’ll have the opportunity to climb a lighthouse, hear tales from the high seas and craft your own lighthouse with Kids on Deck!

View all posts by Nicole and Penny→
Posted in: Events , From the collection , Arts and Culture
↑