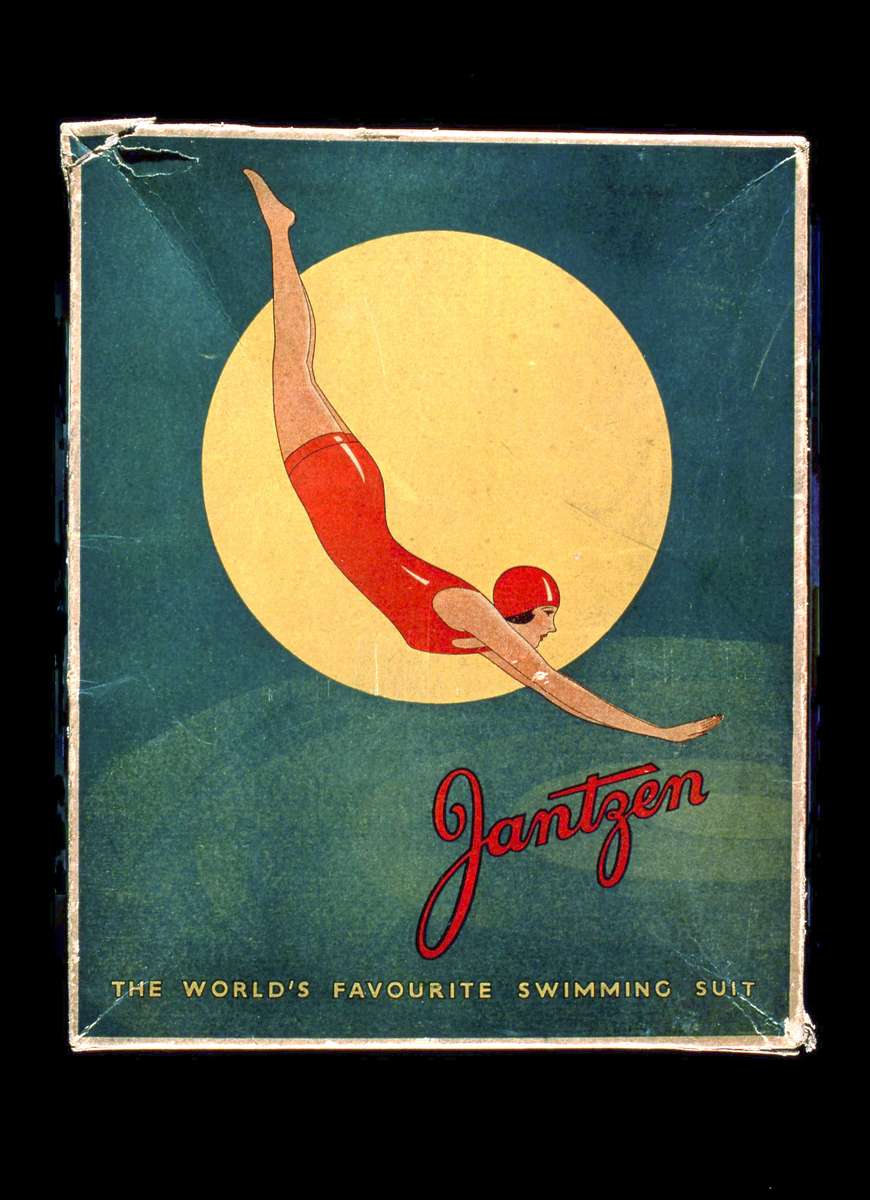 The history of the swimsuit is a long, gorgeous and complicated story that has it all – sex, celebrity, politics and an international stage. The evolution of swimwear design involves technology as much as it involves fashion, as fabrics and techniques developed and improved. Its peaks and troughs followed international events such as world wars and the sexual revolution and the designs lead, and are led by, fashion trends on national and global scales. For Australia, a land of endless beautiful beaches and relentless sunshine, the story of swimwear is an intrinsic part of our social history and our interactions with water.

All of this history is far too voluminous to explore within a short blog post – lucky the museum has exhibitions for this kind of thing. So this week, for object of the week, I thought I would take a small slice out of this long and interesting story and share a fraction of our beautiful vintage swimwear collection – following on from Nicole’s post last week on the fashions that were the centrepiece of foreign naval visits in Sydney Harbour in the 1930s, captured in the museum’s Samuel J Hood photography collection. 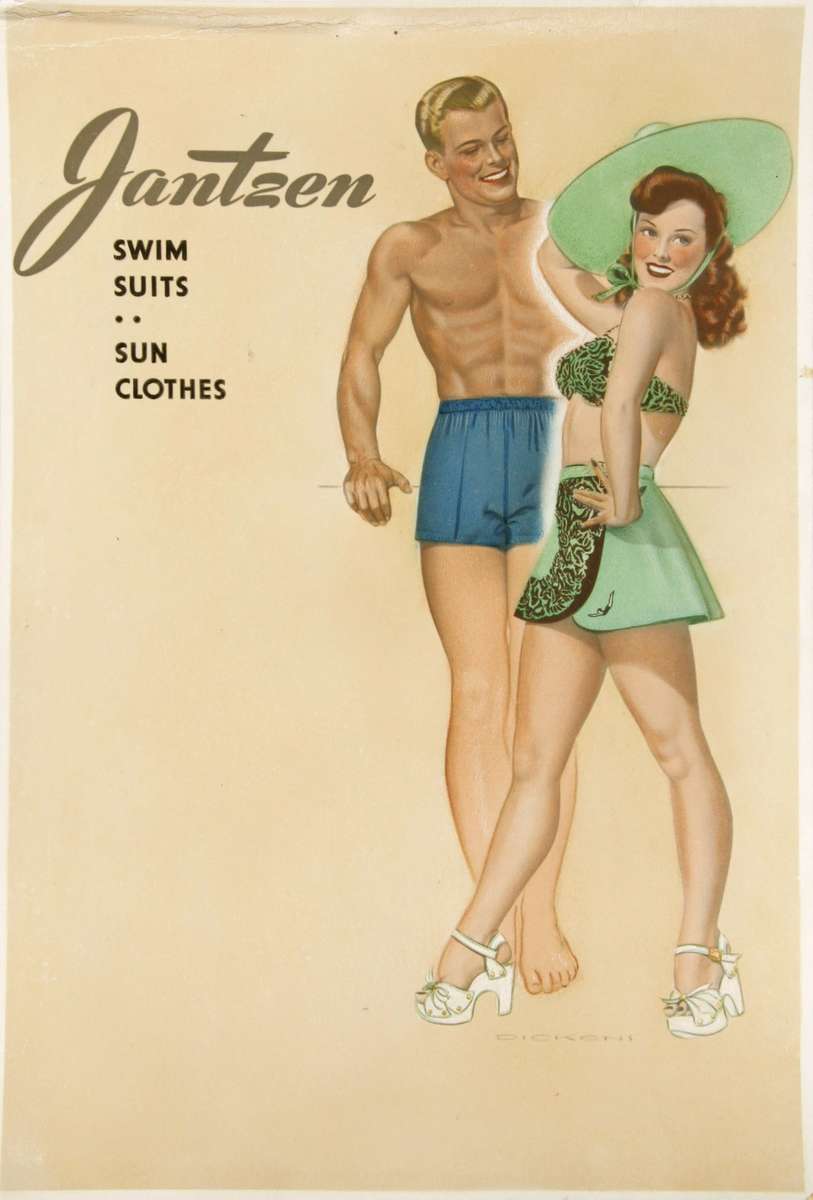 Reg #00044247 ANMM collection. Jantzen packaging from the 1940s-1950s, showing a woman fully accessorised for the beach with heels & hat (& man) in a two-piece suit that still covered the navel & featured a full loose skirt.

The items pictured here were all produced by a global brand of swimwear that began in America around 1910 and still operates today –Jantzen. The company grew quickly after its inception and established international operations in countries such as Argentina and Britain. An Australian Jantzen factory opened in Lidcombe between Mons & Ostend streets in 1928, in direct competition with local brand Speedo. While Speedo was known for athletic, block-coloured designs, Jantzen began to filter fashions, patterns and colours through to Australian beaches and both companies took influence from each other.

Most of the museum’s Jantzen objects date from the 1920s to the 1950s, a period of dramatic change in the development of swimwear, falling as it does between the heavy full body woollen suits of the late 19th and early 20th centuries and the far less modest bikini as it took off in the 1960s. In the middle of this, in the 1930s, Jantzen famously introduced the ‘Topper’, a men’s tank suit with detatchable zip top that helped pave the way for topless bathing for men and boys. 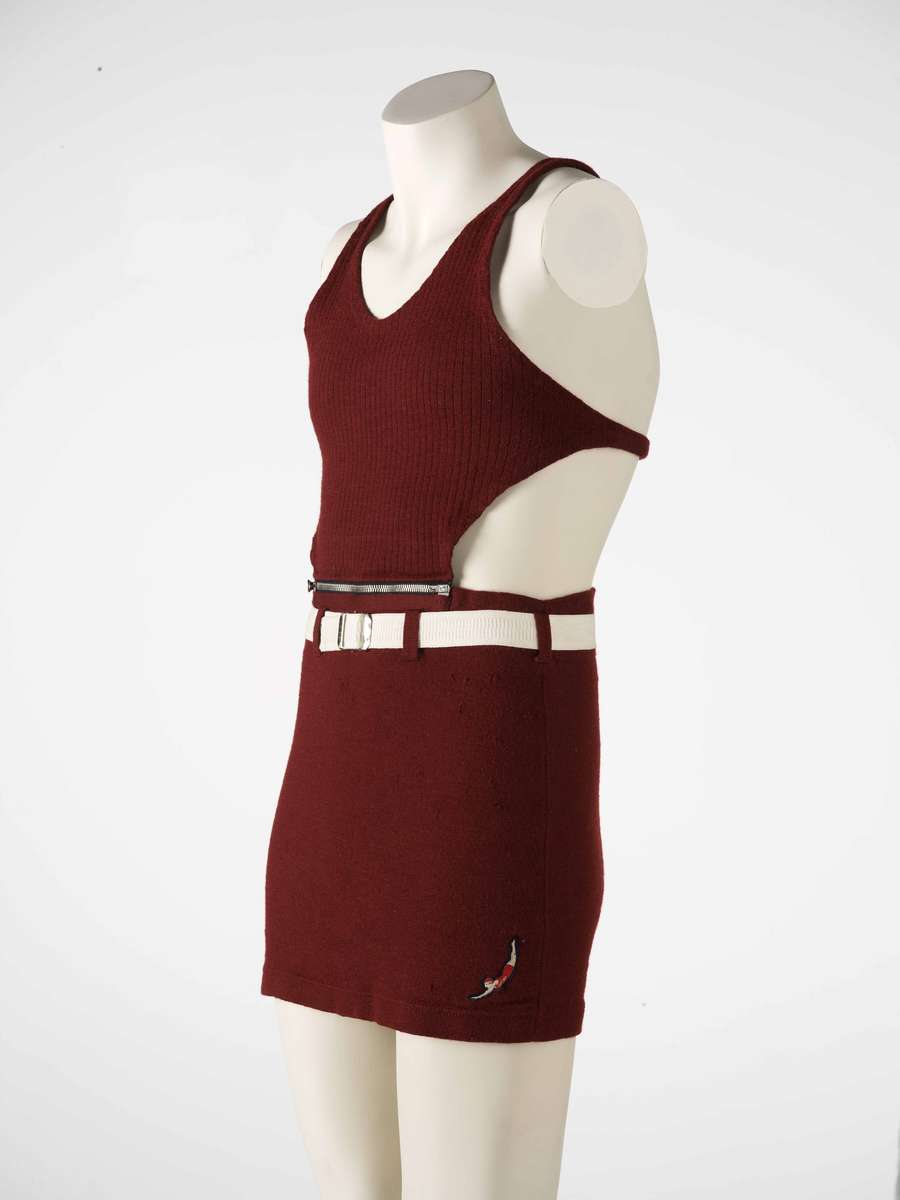 Reg #00028055 ANMM collection. The Jantzen ‘Topper’ design, allowing men to swim with or without their torso exposed.

Aside from the decline in the amount of fabric and the increase in exposed flesh over this period, swimwear fashion from the 1920s to the 1950s has been described as the ‘haute couture’ period of beachwear, driven in part by the emerging Parisian designer Coco Chanel whose beachwear was gracing the bodies of the European holiday set. Swimwear at this time is glamorous and not just relegated to bathing suits – with high heels, beautiful beach pyjamas and fabulous kimonos appearing alongside a wide variety of accessories. This accessorising highlights the transition from covering all to exposing all. While swimsuits were getting smaller, there was still a need to coverup in the public sphere, and the fashionable robes and pyjamas fulfilled that role.

Jantzen was a worldwide brand however it did recognise that Australians were using the beach differently from Parisians or Americans, where the beach was a holiday destination more than a way of life, and customers were more likely to sip champagne by the water than get into it. The company identified Australian trends and icons at a national level, and marketed to this. A newspaper advertisement for Jantzen in 1929 hits on the international fashion for accessorising at the beach and the importance of ‘colour harmony’ with your beach outfit, however a distinctly Australian flavour is visible in their ‘Jantzen Colour Harmony Guide’ (produced on the advice of international colour harmony expert Hazel Adler) which stresses that the company’s products are made from Australian wool and that a new colour is available – “Ocean Blue, an alluring shade created especially for Australia”. 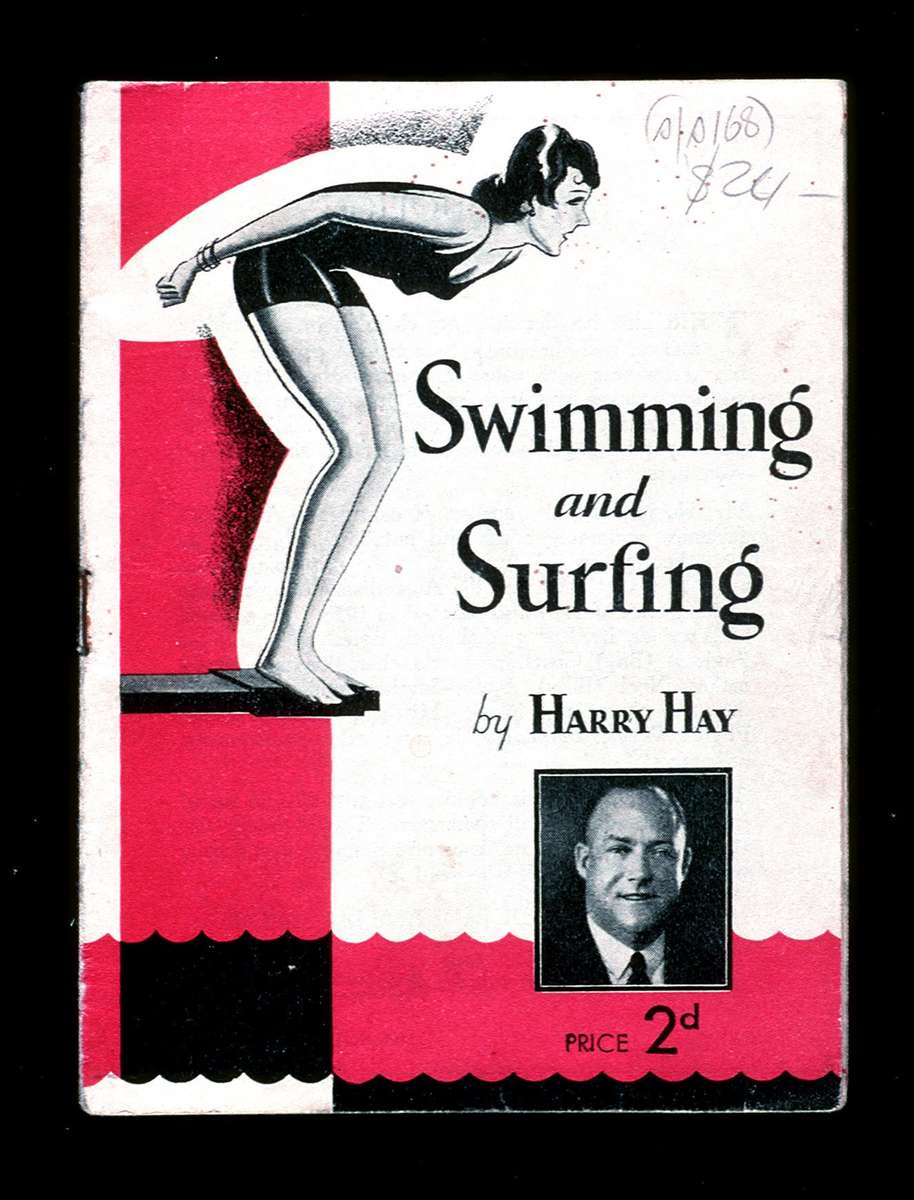 In 1931, in conjunction with Australian swimming Olympian Harry Hay, Jantzen produced a booklet offering instructions and illustrations on how to swim and surf. Identifying the growing trend in Australia for these two aquatic activities, and utilising an Australian swimming icon, the booklet cleverly combines localised community engagement with company advertising.

In the 1950s international brands such as Jantzen and Cole of California were still popular in Australia, however the number of local swimwear companies was multiplying.

Speedo was growing in sales, and by 1973 Jantzen Australia Ltd had changed to Barina Corporation Ltd, disappearing from the Australian Stock Exchange altogether a few years later. However in the time that it occupied the Australian market, Jantzen had helped shape a national taste for beach fashions, and assisted in the promotion of our engagement with water.

To view more of the museum’s Jantzen collection head over to eMuseum and to read more about the history of swimwear in Australia, checkout out our online exhibition Exposed! 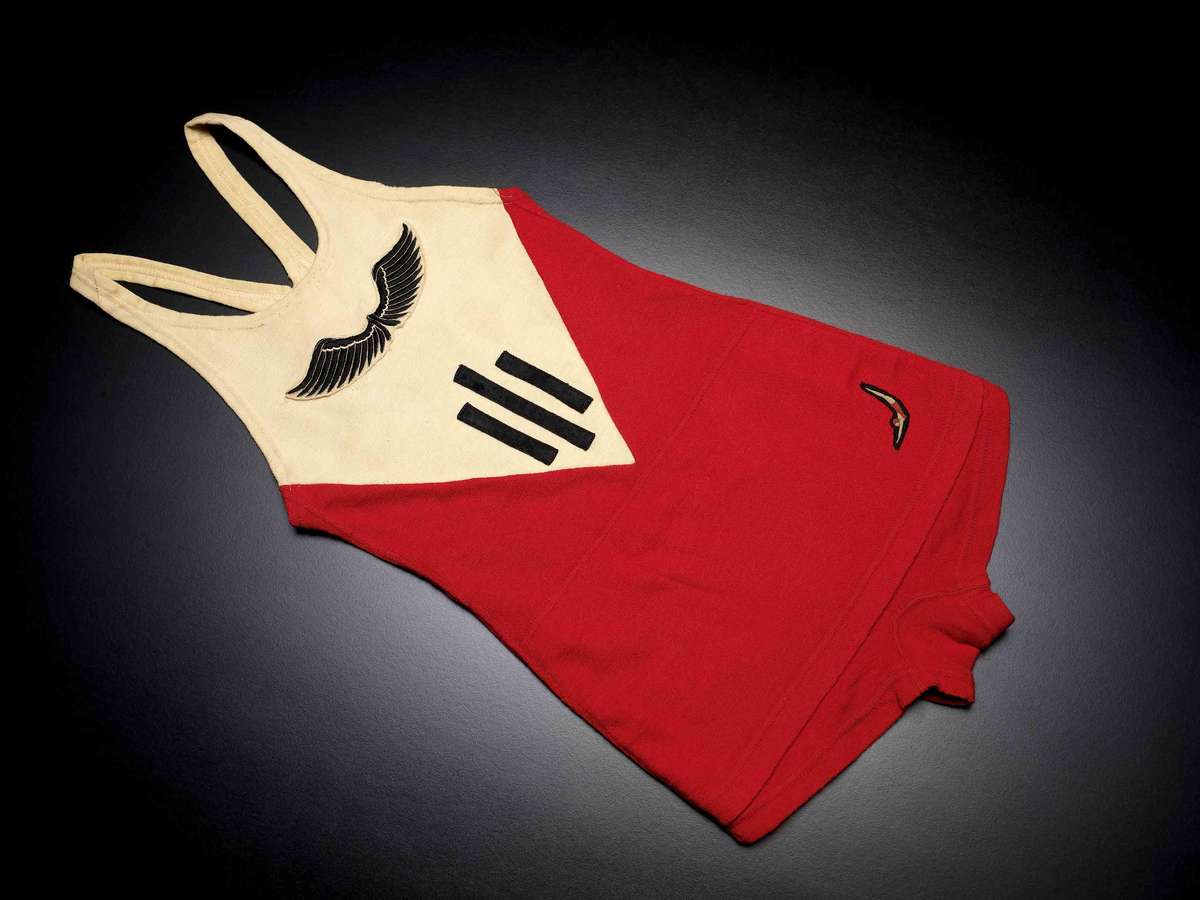 View all posts by Nicole and Penny→
Posted in: Exhibitions , From the collection , Arts and Culture
↑