Models are a great way to engage people about a subject and we used them to explore Indigenous watercraft at Alexandria Park Community School on Wednesday 23 May with about ten primary school children. It was mixed group, mostly Indigenous boys, and they were a bundle of energy. Judithe Hall and I went from the museum. Auntie Deb and Thea were there to keep an eye on things. We started quietly with just a strip of coloured paper each and two paper clips. 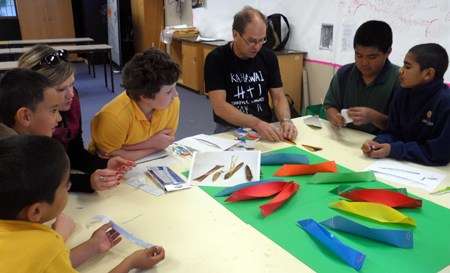 A fold on the centreline and a clip at the first end held it secure. The corners of the other end are then folded in to the middle, then brought together as a fold on the centreline and clipped. After less than 5 minutes we had canoes, in fact more than 10 canoes! We had made miniature paper versions of the derrka or nardan featured in the well-known movie 10 Canoes.   I then showed the group a drawing of the canoe, the geese they hunted using the canoe and then the famous Donald Thomson image from the late 1930s of the 10 canoes in the Arafura Swamp. So we lined up our canoes on two bits of green cardboard and recreated that scene as a little diorama, complete with coloured canoes!

Plasticine was next, and everyone was rolling out mangrove logs in a variety of colours so we could form two kalwa rafts from the Kimberley region. One was made in red, yellow and black Aboriginal colours. Kids raced outside to get twigs to make spears, and things started moving quickly. The rest of the plasticine was rolled together in a vibrant mixture of colours to form a tree trunk, and then passed around as each person hollowed a bit out until we had a dugout formed. Another twig became the mast, and a square of coloured paper became the sail, sticky-taped on. 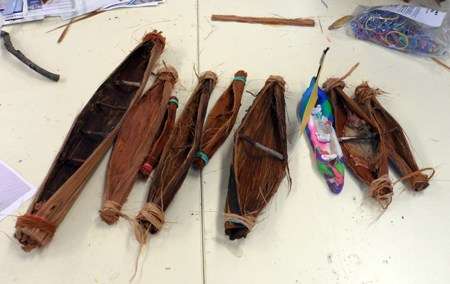 Bark canoe models made by the students

Eager to do more, it was time to use natural materials. Small bits of stringy bark were used for the real nawi and soaked overnight to be more pliable. Deft fingers folded and squashed together ends, rubber bands secured them, then little twigs went in to hold the sides apart. String ties made from strips of bark were lashed around the ends to cover the rubber bands and another eight canoes were on the table!

Next- another raft- a walpo from Mornington Island and one boy took charge – arranging the twigs, using rubber bands to hold the ends and cutting paperbark for a seat. 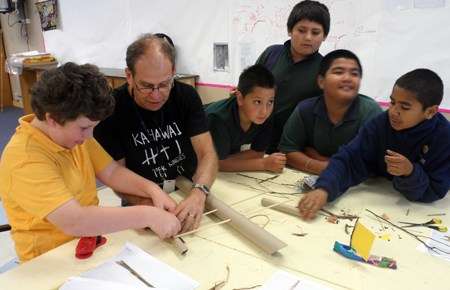 David shows the students how to build an outrigger model

Time for the big one, a double outrigger form Torres Strait!  I had pre-cut the hulls from cardboard tube and cross beams from dowel. Another boy could see the plan already and started to feed the dowels through the holes in the main hull as they were meant to go. The rest helped tape the outrigger hulls on and put feathers in the back for the decoration they carried. Then we were done! 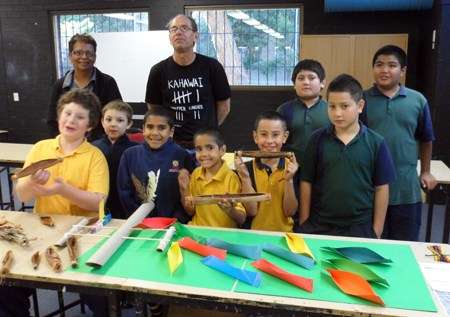 With a few minutes to go the proud kids posed with their models for photos. They wrote a short sentence or two about the fun they had that morning and then off to lunch.

“Today we made canoes and spears and I thought it was a good experience and my favourite canoe was the outrigger.”

“It was very fun but the most fun of all was when outrigger and we want to make paint..”

“We had fun and made spears and boats. We had fun making them.”

“Today we had to make a canoe and a raft. It was so fun.”

“I love making canoes. The one I liked the most is outrigger. I learnt that aboriginals made different kinds of canoes.”

“I like making canoes out of bark off the tree.”

This joyful collection of models will be on display during the Nawi- exploring Australia’s Indigenous watercraft conference next week. 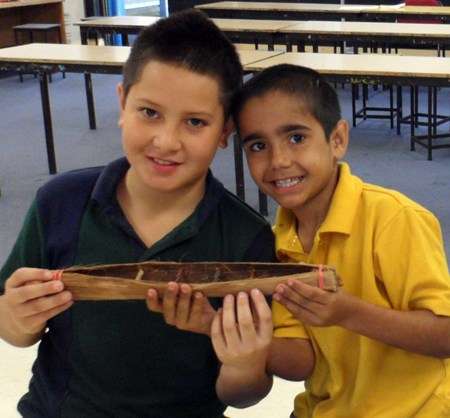