Last Wednesday’s fine weather had everyone out enjoying it if they could. For me and 10 others, it was perfect for nawi construction. We were building more tied-bark canoes, probably the first ones to be built on the shores of Sydney Harbour in well over a century.

I was down at Blackwattle Bay, working with an all Indigenous group made up of  members from Tribal Warrior Association’s Youth Mentor Group, their CEO Shane Phillips, and from National Parks and Wildlife Service NSW, Dean Kelly, Aboriginal Cultural Liaison Officer, three of his team and Elder Uncle Keith from La Perouse.

This was another step in the museum’s commitment to working with and supporting Indigenous communities. For me, it was an opportunity to learn from the group and to share the knowledge of building nawis that I’ve built up over the past 12 months. There is still a lot that is not known about the craft and has to be discovered by practical experience.

The bark was already there – my previous blog about my Bateman’s Bay adventure tells that story – so we started with an introduction, just talking about the bark. The most important thing is to understand the life and spirit captured in the bark; it’s a living part of the tree. The capillaries that carry the nutrients, created by leaves, form the fibres and strength of the bark we were going to use. It has life that we can put into our nawi. 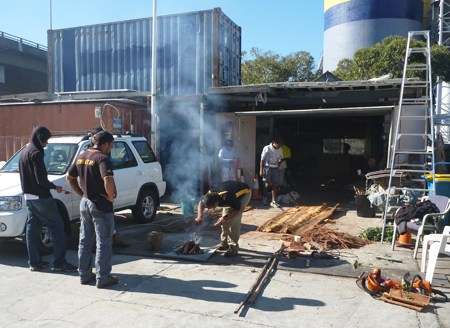 A fire is lit to heat up the bark

We then got into the practical side. We cleaned off the loose bark, stripped the ends down to make them thinner for folding, pulled long strips off for ties, set up a fire, shaped some wooden pegs… there was something for everyone to work on.

We laid the first end of the bark over the fire within 40 minutes of starting, and 20 minutes later the heat was doing its job. So the folding team took their sides as the sheet was removed.

Hands on each side we grabbed the edges and folded it in and then back on itself. Another person at the front kept things aligned and got the middle ready to take its final crease, while the ‘lasso man’ tightened the rope to secure it all in place. On with the rope, then back off as we realigned the folds, then a final heave and we had an end in place, rising up as it should! 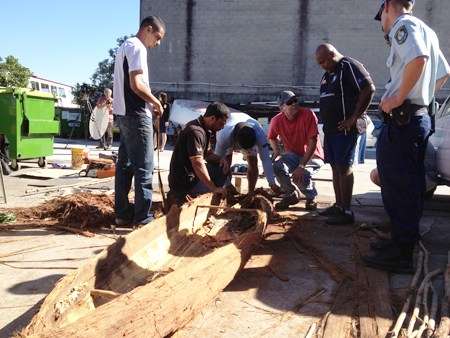 We begin to tie the second end of the canoe.

Next, a blueberry ash peg was hammered through, holding the folds in place as strips of bark were lashed around to complete the process. We then turned the bark, heated it over the fire and did it all again, this time for the cameras. SBS and ABC had each sent a crew to capture the action.

Watching over the process was Redfern’s Police liaison officer, he had come down to see what the boys were up to, and staff from the museum had come across as well to see what these projects I have been doing actually involve. 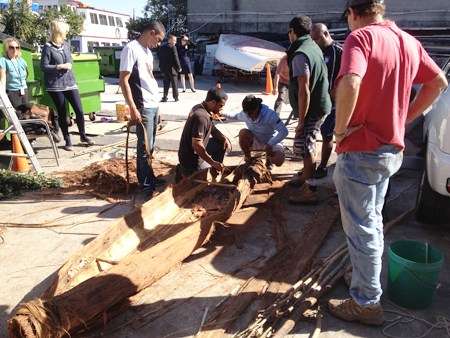 Tying the ends of the bark canoe

The final step was to fit a support structure, to push the sides out and give it a bit more shape and strength. Afterwards the TV crew interviewed us, keen to hear what everyone thought of the process.

We formed the ends on the second bark and called it a day. We were happy to have got this far, and in good shape to finish the second canoe in the coming days.  A big tidy up followed, nawi building seems to develop a lot of loose material – dead bark, strips off the inside of the bark, leaves and twigs off branches, firewood. All signs of productive activity and the restoration of a significant cultural activity – nawi building on Sydney Harbour.

The Nawi conference is only a few weeks away! Over two days 31 May – 1 June, people from all over Australia will gather to explore Australia’s indigenous watercraft though a series of talks, demonstrations and performance. You can register on our website. 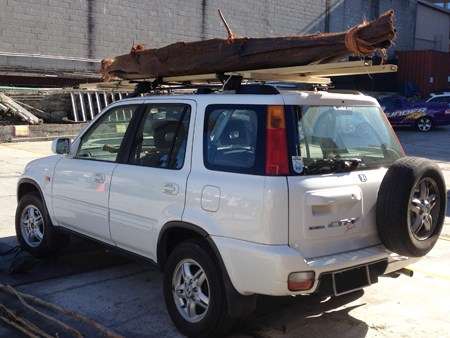