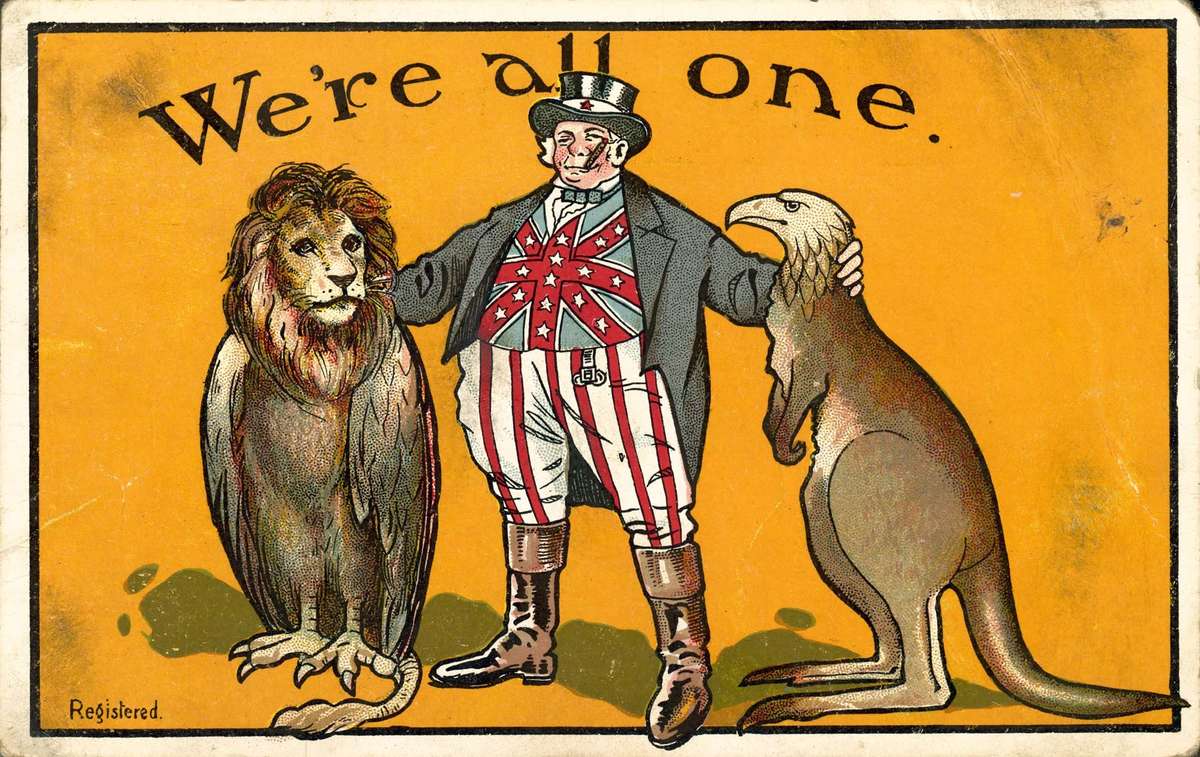 When a US naval contingent visited Australia as part of a world tour in 1908, the celebrations and events that surrounded the fleet’s arrival generated enormous amounts of ephemera and souvenirs, some quirky – all patriotic.

The Australian National Maritime Museum holds hundreds of these types of items ranging from pins and medallions to programs, postcards, newspaper items and even sheet music. These objects, with their vivid images and patriotic fervour all provide an impression of the excitement and impact that the visit caused in Australia in 1908.

The voyage of America’s ‘Great White Fleet’ from December 1907 to February 1909, as it circumnavigated the world, had a combined, delicately fused purpose. Coming at a time of tense relations between Japan and America, American President Theodore Roosevelt recognised a need to demonstrate internationally his country’s blue-water naval capabilities as well as reinforce diplomatic ties. The 16 warships (the largest 140 metres long and weighing 16, 000 tons), all painted white in peacetime colours, and the 42 227 mile circumnavigation, completed without a breakdown, was a complete success for America both diplomatically and technologically.

The inclusion of Australia on the itinerary of a globally observed voyage was an equally wonderful opportunity for the newly federated country to demonstrate its social and political status. The visit also highlighted the absence of a national naval force in Australia, coming three years before the founding of the Royal Australian Navy in 1911. Australia’s dependence on the British navy, geographically distant, was perhaps behind Prime Minister Alfred Deakin’s push to host the fleet and build ties with America’s growing naval presence in the Pacific.

Estimates of around 650,000 people watched the ships arrive in Sydney Harbour on 20th August 1908 and the American crew were treated to an exhaustive program of festivities in Sydney and Melbourne as well as a smaller (but no less enthusiastic) welcome in Albany. The American sailors enjoyed themselves thoroughly, and an estimated 150 men were unaccounted for after the fleet’s departure from Australian shores. 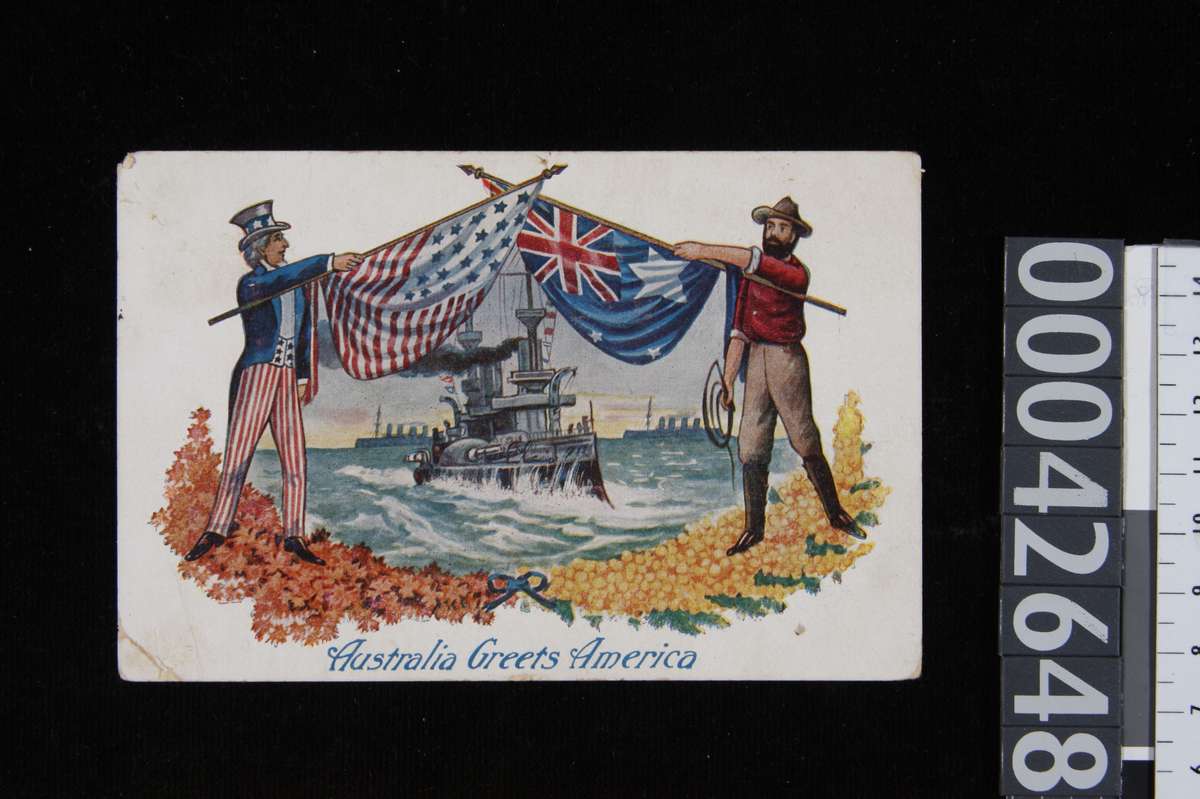 Strong patriotic images such as crossed national flags, kangaroos and eagles are all major features of ephemera relating to the Great White Fleet and are indicative of the desire for a connection between the two countries. The amount and variety of ephemera that survives is testament to the popularity of the event and the impact it had on Australian society at the time.

That the event could not have escaped the attention of any Australian is evidenced by the fact that images and references to The Great White Fleet were also used in advertising. Entrepreneurial business owners were quick to jump on the bandwagon and tie their products and services to the event. 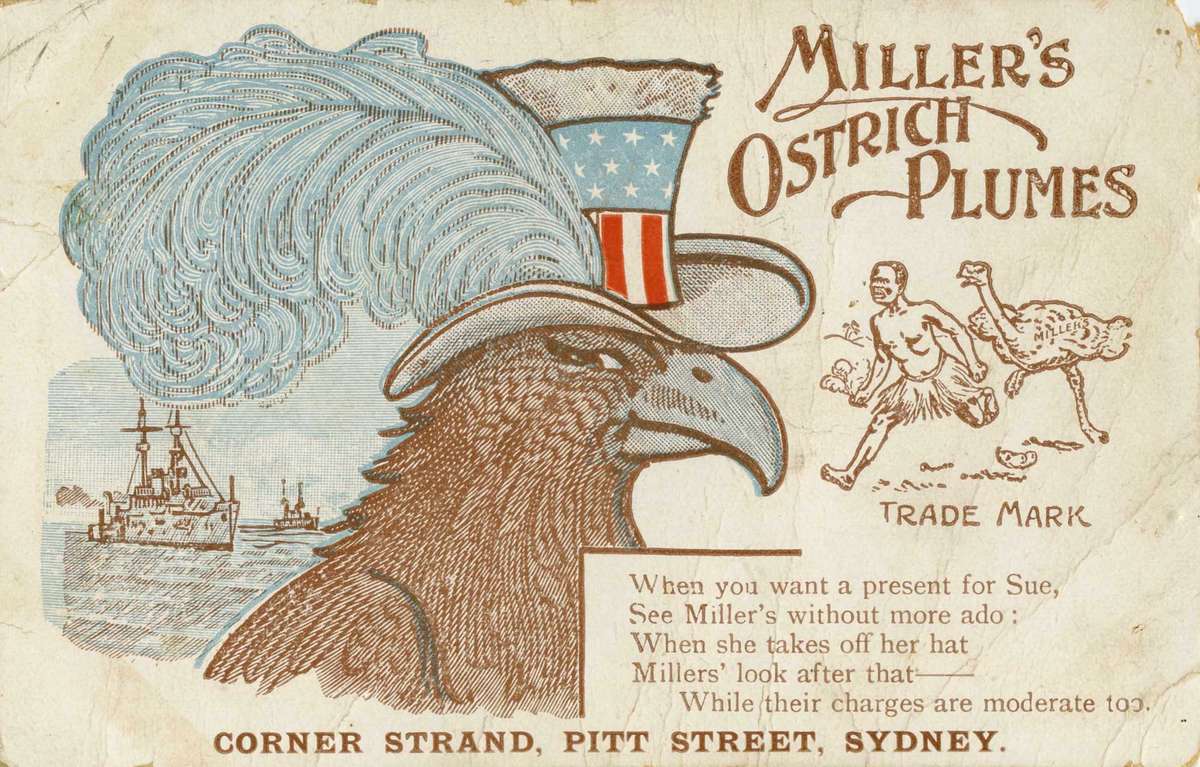 A postcard advertising a milliner’s business uses an American eagle (wearing a very dapper creation) with the fleet transposed in the background. Another, advertising a real estate firm, shows a kangaroo welcoming an eagle with the words ‘Welcome to Sydney Mr Eagle: where Rickard sells good land on easy terms.’ A large advertisement for a shoemaker on the front page of The Australian Star newspaper cries ‘a whole fleet of sales’.

The museum also holds a lovely double sided foldout postcard featuring an image of an English lion, a kangaroo and an emu standing on Sydney heads as the fleet passes through with the text ‘laxo-tonic pills cures all ills’ appearing discreetly on the rock beneath the animals’ feet.

Ephemera such as postcards, invitations, menus and advertising leaflets are all items that are generally designed to be used only once – for one event, one letter, one day. This does make them vulnerable to being discarded, however the nature of these items is that they provide a snapshot into a moment of time and a window into the finer details of a major historical event.

View all posts by Nicole and Penny→
Posted in: From the collection , Arts and Culture , Navy and defence
↑