People woke up early this morning.  They are excited at the prospect of finding another wreck today. The conditions are perfect!  The wind had swung to the east and the waves are nearly flat.  Our intrepid mag team can’t wait to get out, so a boat is launched off the top deck and Nigel, Lee and Wayne from James Cook University head out at 6 am.

They came back an hour later with reports of a large anomaly in the gutter spotted yesterday.  In magnetometer speak it is a multiple di-polar anomaly with a maximum amplitude of 800 gamma lasting at least 6 seconds.  In simple English, it means a scattered site of iron debris covering an area of 30-50 metres.  Our reference tables for the magnetometer allow us to convert the strength of the anomaly to weight of iron. In 10 metres of water an anomaly of 800 gamma equates to a mass of iron of approximately 10 tonnes!

After breakfast we sent out the two magnetometer teams again.  The morning team went back to the west side of the north reef to confirm the earlier find.  The other team was working in the lagoon around the coral cay.  By mid-morning dive teams were sent into the gutter with metal detectors to try and isolate the source of the anomaly.  Three successive dives were unable to locate the source.

At lunchtime we debriefed on the results of our mag and metal detector surveys.  Consensus of opinion is that the source of the anomaly is buried beneath the coral sand at such a depth that it is beyond the metal detector’s sensitivity, but is so large that it easily definable on the magnetic signature of the magnetometer.  As we are not allowed to disturb the bottom sediments by any excavation, we are unable to confirm the source iron.

From the historical records we know that the Lion had a 316 lb iron anchor, two iron try-pots weighing a total of 676 lbs., 500 iron harpoons and lances which would weigh over 1 tonne, and 6 tonnes of hoop iron to bind the whale oil barrels.  We also assume that the Lion was armed with at least one cannon, as the accounts for the fit-out of the voyage lists two casks of cannon powder.  We also know that on its previous voyage Captain Hardwick used canon to ward off an attack by South Sea Islanders. This would seem to correlate very closely to the observed anomaly. 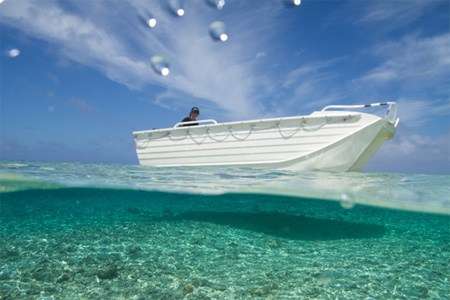 All divers were up by 4 pm.  We moved everyone onto the coral cay for the annual team photo.  Unfortunately, with the two second time delay Xanthe wasn’t able to get into her own photo! 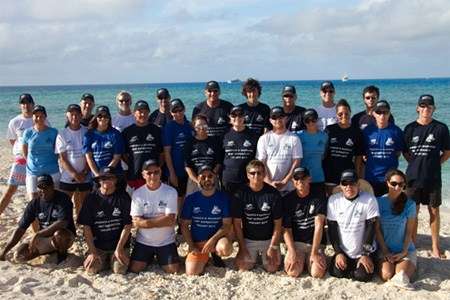 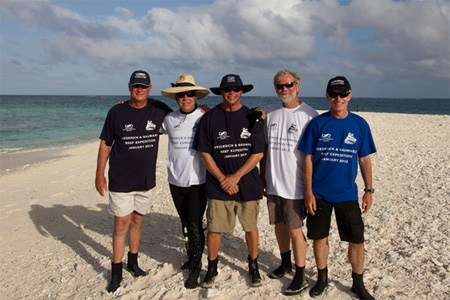 We had our final dinner together tonight.  Tomorrow Silentworld II is having a rest day.  Kanimbla will be moving to Hope Islet to spend our last day of the survey.  The guano vessel Lone Star is known to have been lost there.