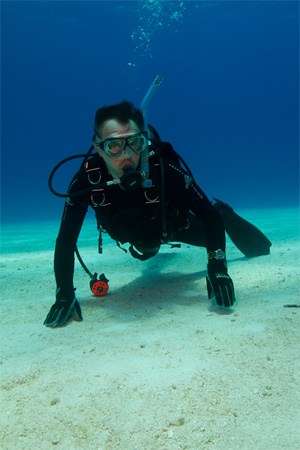 We woke up to great conditions this morning. The wind is still coming from the north, but it has dropped off considerably and the seas are much calmer as well.  Today we are off on a Lion hunt!

After breakfast we sent out two magnetometer teams on the north side of the reef.  One team was working from the northern entrance moving to the west and the other from the entrance to the east.  By mid-morning the west team had come back in with a moderate anomaly to be checked out.  A dive team was sent out and at the bottom (at 17 metres depth) was coral sand with gently undulating ridges from the surge and current.

After lunch the mag teams went back out again.  Another dive team went in search of the anomaly and a team of snorkel divers searched the shallow lagoon on the west side of the entrance.  They noticed a deep gutter of water varying between 4 to 10 meters deep just to the south inside the outer reef and just north of the shallow lagoon.  This fits the captain’s description of the wrecking of the Lion.

…the lookout-man discovered broken water right ahead; the helm was immediately put down (to star board,) but too late to clear the reef, the vessel grounding immediately. She soon after forged over the outer reef-and became fixed, falling over with her deck to the reef.

We remained on the reef three days, employed in getting ready the boats and securing water and provisions, to carry us to Wide Bay or elsewhere. The vessel was entire when we left her, and, as she was well protected by the outer reef which she beat over, there is every probability of her holding together a considerable time-more especially as she is in a basin in the north side of the reef, and the heaviest winds here are from S. and S. E. 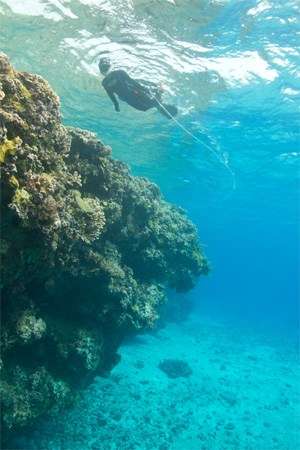 We will have to check this out with the magnetometer tomorrow.

The last divers were back on Kanimbla by 6 pm.  The end of our first day at Wreck Reef and everyone is really tired, but excited by the work we had done.  People didn’t last long after dinner, not a person up past 9.30 pm!