The wind has moderated a bit this morning and the swell is calming down too… at least on the inside of the reef.  It is still too high to get out on the reef face.

We are on the search for the Woodlark, a Sydney merchant ship that struck on the shallow reef on the eastern side of Saumarez Reef in 1829. As it wrecked, it went up and over the reef into a shallow basin on the reef top.  We are going to approach the site from the inside and see if we can get close enough to search the basin while staying away for the pounding surf on the outside of the reef.

The last time anyone had been on the site was back in 1991.  At the time, Ron Coleman an archaeologist with the Queensland Museum was only able to spend about three hours doing a quick survey.  At least we have a GPS location from that visit which will make our work a lot easier.

Time to find the Woodlark!  We loaded the boats mid-morning.  We have two manta board teams and a snorkel team.  One of the manta board teams will be working from the basin out to the east as far as a prominent rock outcrop.  Supposedly nine survivors from the Woodlark scrambled onto this rock and stayed on it for three days. 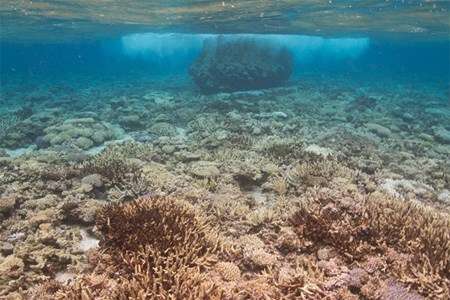 The other manta board team will work from the rock further east, out towards the surf break.  The snorkel team is going to work in and around the basin.

After lunch three scuba teams went back out on the reef.  Two teams divided the basin in half along the east/west axis.  One team worked in the southern half and the other in the northern half of the basin. The two teams conducted a metal detector survey to locate iron objects below the surface and buried in the coral sand sediment.  The third team which included our photographer, roved over the entire site taking photographs and conducting a visual survey of the area for material visible on the reef top.

There was a strong current running from the east to the west, partially caused by the rising tide, but also pushed along by the still strong easterly winds. Hopefully the weather will moderate further tomorrow.  With good wind and waves we should be able to wrap this site up in one more day.

Tomorrow we are also expecting our re-supply vessel to arrive in the afternoon. 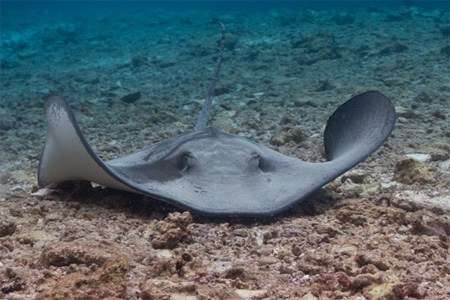