Today my team was assigned the task of doing a measured site map. When we headed out for our first dive, the outside of the reef had a lot of surge which made it very difficult to use long tape measures on the site.

Inside in the lagoon, James and Maddie from Flinders University were measuring a newly discovered timber which may be part of a keel or keelson – a major structural timber low in the bilge of a vessel.  It also appears to have articulated timbers that disappear into the bottom sands. 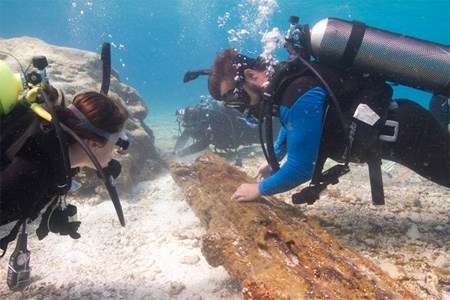 We were back at Kanimbla to swap tanks for a second dive, but had to wait on a surface interval of one hour.  We went back out and got in another 35-minute dive before lunch.
While we were in the water there was another team that was doing a final sweep over the coral cay with metal detectors.  We had used the magnetometer on land a couple of days before, but it didn’t show any concentration of ferrous metal. 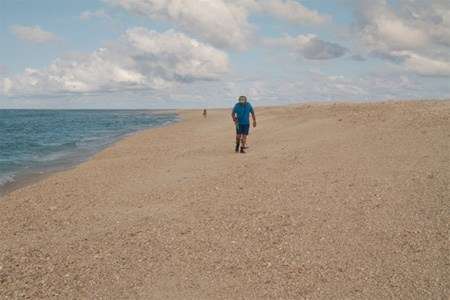 Xanthe, our photographer did a fly over of the outer reef site taking photos of the different deposits of small finds that had been identified…

…and some of the not so small finds, like this piece of collapsed lead sheathing (pictured left) which is about 500 x 750mm and weighs about 200 kg.  We aren’t sure what it is exactly, but some theories include lead sheathing associated with a powder room.

After our final dives we discussed the results we had achieved and the potential for further significant discoveries.  We decided that with the change of weather being forecast, it would be better to make the crossing to Saumarez Reef before the wind increased.  That way we will have a few days to potentially work on the Woodlark or the Noumea – two ships of interest that are known to have wrecked there.  The Woodlark was a Sydney merchant ship lost in 1829.  The Noumea was a black-birding vessel, recruiting labourers for the Queensland cane fields in 1880.

We will let you know how things go.