‘Pass the whale, please’: A tin of whale meat 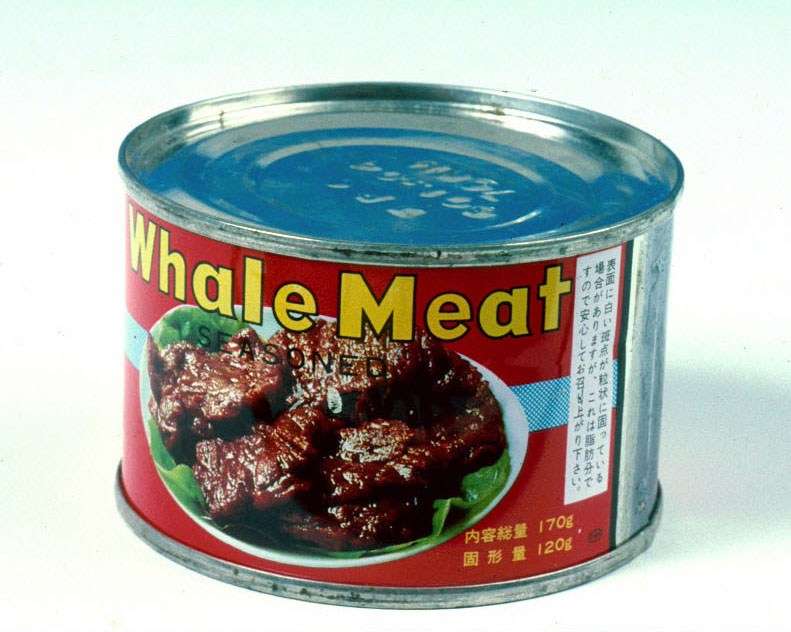 This tin of whale meat relates to a pivotal stage in Australia’s maritime history, when whale meat became prohibited from import/export in Australia. Produced in Japan by the Taiyo Fisher Company, the tin of seasoned whale meat was confiscated by Australian Customs in the mid-1980s under the Commonwealth Wildlife Protection Act (1982).

Nothing was wasted in the whaling process, and by the early 20th-century Australian whalers were grinding the whale carcass to add to fertiliser and livestock feed. Many nations believed, however, that the meat from a whale should be sold for human consumption. Fresh, salted, smoked, cured, preserved or canned, countries all over the world were increasingly eating the ‘by-product’ of whales, particularly Japan, Norway and Germany. Despite these nations best efforts at promoting the meat by distributing canned samples, most American, British and Australians simply found that there was ‘something unpleasant about the thought of eating whale meat’ (‘London Table Talk’, The Advertiser, Adelaide, South Australia, 20 April 1910, p 10).

It wasn’t until the food shortage of World War I that alternative meats such as whale were seriously reconsidered in America and the British Commonwealth.  Renamed ‘sea beef’, the meat became a reasonably priced and plentiful substitute for beef, pork and lamb. Sold fresh in steaks and roasts, Women’s magazine gave instructions on how it should be cooked, preferably with a ‘good brown onion sauce’.

View all posts by Nicole and Penny→
Posted in: From the collection
↑