Navigation Chart for the Darling River

December is an interesting month for discussion of water conservation and regulation in Australia. At the museum, AQUA: A Journey into the World of Water* opens on 3 December with a multisensory experience that promotes a message about the provision of safe drinking water. It asks visitors to ‘make a pledge to save water for the planet’.

Meanwhile, the Murray-Darling Basin Authority’s Draft Basin Plan - which was (pardon the pun) leaked to journalists last week is to be released for 20 weeks of public comment from the end of November. The draft plan has already drawn widespread criticism and comment from both environmentalists and irrigators.

Water is a hot topic at present.

Our historical practices of water usage, management and flow diversion are important areas for maritime history, and for maritime museums. In the past, historians generally wrote about the affairs of people as they moved across, worked, or lived on the land, rivers and oceans. The environment was in effect, a backdrop to the history of humanity; human-nature interactions were a story of how we have harnessed the environment over time.

Yet environmental histories are now more attuned to finding a connectedness between people, their stories and their environments. In museums, we are increasingly looking at objects from the past not merely as records of human progress but as, for example, how they might be records of climate change. 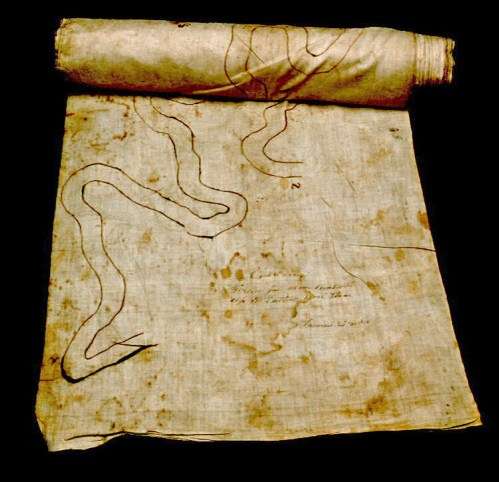 This navigation chart of the Darling River was hand-drawn by paddle steamer captain James B Packer in the mid-nineteenth century. Such charts were commonly made of canvas or sail cloth and were rolled up into a scroll. This chart shows a two hundred kilometre long section of the meandering Darling River from Cuthero Woolshed to the confluence of the Murray and Darling rivers at Wentworth. The chart is just over 1.73 metres in length.

As well as all the important landmarks of homesteads, woolsheds and hotels along the river, Packer’s chart meticulously depicts sandbanks, fallen trees, snags, rocks, and billabongs. It is a paddle steamer navigation chart with critical information for river captains. Yet it is also a snapshot of the river’s landscape – and its health – from over 150 years ago.

Packer’s carefully hand-drawn chart is one of three similar inland riverways maps in the National Maritime Collection. Each one is like a work of art in its own right. They also provide valuable historical information about the environment of the Murray-Darling basin. As the balances of water conservation, river flow restoration and irrigation are debated over the next weeks, Packer’s river chart reminds us of the ongoing importance of such objects in understanding maritime environmental histories.

*AQUA: A Journey into the World of Water is created by ONE DROP, an initiative of Guy Laliberté, Founder of Cirque du Soleil®.

View all posts by Stephen Gapps→
Posted in: From the collection , Oceanography
↑