On 18 October 2001 a decrepit, overcrowded fishing boat embarked from Sumatra, Indonesia, carrying more than 400 asylum seekers who had fled Iraq and Afghanistan. It foundered the next day en route to the offshore Australian territory of Christmas Island, drowning 353 people – 146 children, 142 women and 65 men. The boat would come to be known as SIEV X (Suspected Illegal Entry Vessel Unknown).

According to survivors more than 100 people remained alive in the water that night when two vessels arrived and shone searchlights, but failed to rescue anyone. Only 45 people were eventually rescued, by passing fishermen. Ten years on controversy still surrounds the sinking of SIEV X. Despite a number of Australian Senate motions a full independent inquiry into the tragedy has yet to be held.

To acknowledge the 10th anniversary, the Australian National Maritime Museum is displaying a compelling collection of student designs for the national memorial to SIEV X in Canberra in X for unknown – SIEV X memorial designs.

The concept for the memorial emerged through a nationwide art project coordinated by a group of friends from the Uniting Church. In 2003–04 students from more than 200 high schools learned about SIEV X and responded with designs for the memorial.

Their designs reflected a powerful emotional and intellectual engagement with the story of SIEV X and captured a range of feelings – empathy for the plight of young refugees, disbelief at the lack of media coverage of the incident and anger at the nation’s treatment of asylum seekers. A selection of these designs, including the winning concept by Brisbane student Mitchell Donaldson, is displayed in X for unknown. 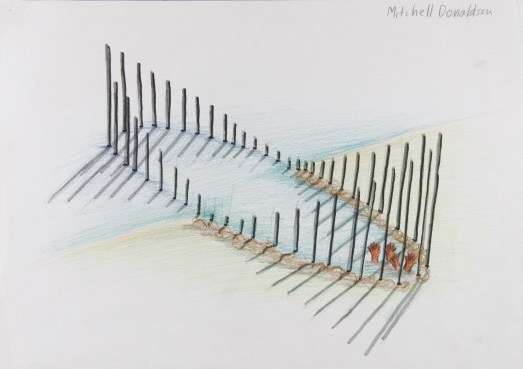 Mitchell’s design consisted of a series of painted wooden poles forming the shape of a boat and running down into Lake Burley Griffin. He says, ‘I designed this memorial to make people think about the mistakes we made when the boat people needed help. It’s partly on land and partly in the water to represent how close the people were to safety. There are 353 bars, which is the number of people who died. The bars also represent that people were trapped. The low bars on the side show they could have been saved if we’d helped them.’

In 2007 the memorial, comprising 353 wooden poles decorated by schools, churches and community groups across Australia, was installed temporarily in Weston Park, Yarralumla, where it still stands today. Stretching over 300 metres, it is a haunting reminder of the scale of loss of life in 2001. Project organisers currently have a three year permit for the memorial, with hope it will become a 20 year permit.

X for unknown – SIEV X memorial designs is on display until 20 November 2011.

View all posts by Kim Tao→
Posted in: Exhibitions , From the collection , Migration
↑