Why did Amundsen survive and Scott perish? Was Scott really a failure?  Who made the greater contribution in the Heroic Age of Antarctic discovery?

Join our online debate with Pulitzer prize-winning author Professor Edward Larson and gastronomic academic Diana Noyce.  Ask your question or let us know what you think in the comment section of this blog post.

So… what do you think? Was Scott a  failure or a hero? 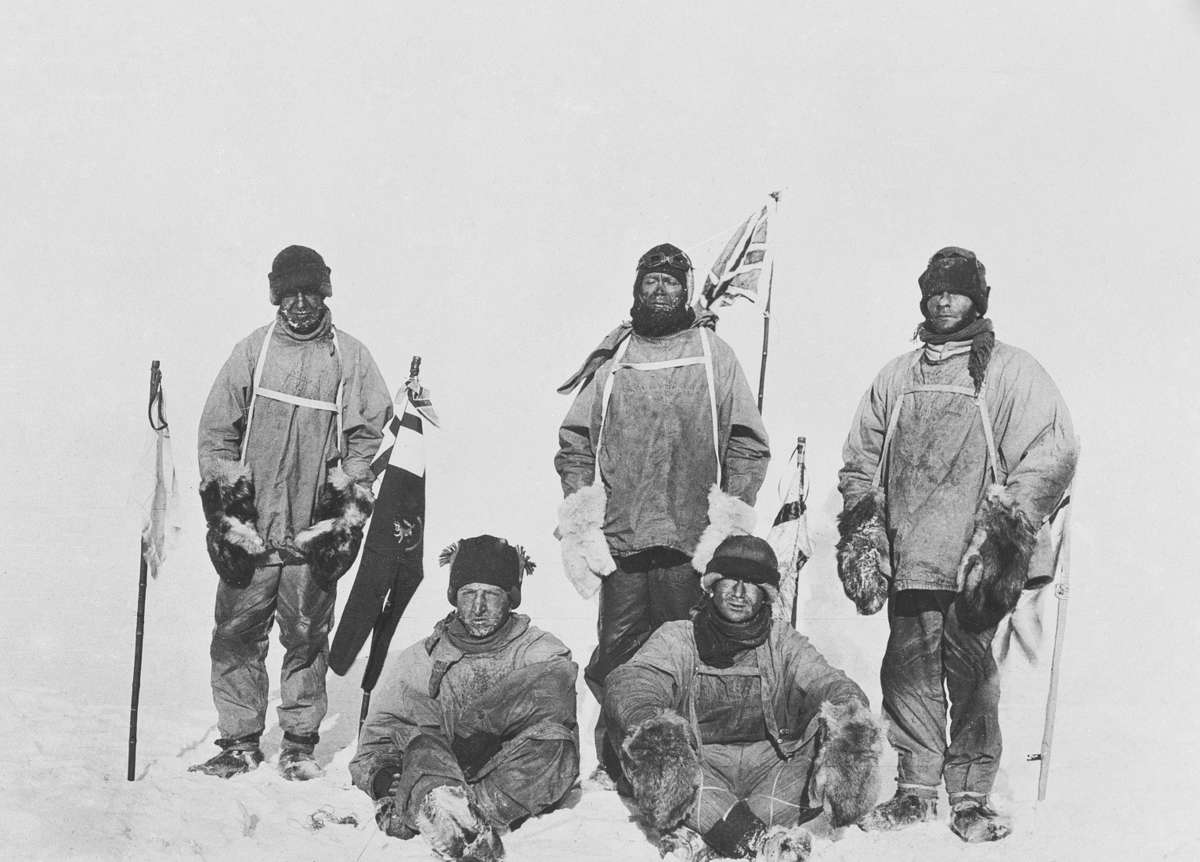 Scott and the Polar Party at the South Pole. Licensed with permission of the Scott Polar Research Institute, University of Cambridge.

Background
In 1912 Norway’s Roald Amundsen and Britain’s Captain Robert Falcon Scott set off across 500 miles of snow and ice in the first race of its kind to the South Pole. In appalling weather conditions, Scott and the other four members of his team perished on the return leg of their journey. Amundsen returned to his native Norway a hero.

Professor Edward Larson: ‘Given the drama of the British death march, the remarkable efficiency of the Norwegian effort, it should not be surprising that historians and popularizers alike have focused the narrative of these expeditions on the quest for the Pole.   As a historian of science, however, I’m drawn to science.  Researchers on Scott’s two Antarctic expeditions and the intervening one led by Ernest Shackleton opened an unknown continent to science and enriched our understanding of global meteorological, biological, and oceanographic systems.  For the first time, they proved that the southern continents were once linked and offered surprising evidence of climate change.  To me, not only are these stories of doing science in extreme conditions at least as gripping as those about getting to the Pole, they are part of a more significant narrative that continues today in the vast amount of research still conducted in the Antarctic…

The polar trek of Amundsen and his men was a remarkable human feat.  Scott and his men, however, contributed something more than gaining the Pole.  They advanced human knowledge of an unknown continent and its place in global systems.’

Diana Noyce: ‘In summary, food played a vital role in the race to the South Pole. A mere glance at Scott’s diet reveals that it was inadequate, completely lacking in vitamins and low on calories…Scott’s men ate white bread. Amundsen’s team ate brown bread fortified with wheat germ and leavened with fresh yeast, as well as Lindström’s buckwheat cakes, all good sources of B vitamins…

Moreover, being Norwegians, Amundsen and his men were more inured to the climate, both physically and mentally, as well as the long months of winter darkness, and the long summer days. Skiing was second nature to them. Some commentators have argued that Scott’s Polar clothing was inadequate. However, it has been recently proven that Scott’s woollen and Burberry clothing was suitable for manhauling. The fur anoraks that Amundsen’s men wore and which was suitable for sledging, would have been too hot for Scott’s manhauling team. In the end it was the dogs that Amundsen took to the Pole that contributed to his success. They were not only their means of fast and efficient transport, but they also provided companionship for the men, as well as providing fresh meat, a valuable source of nutrition…

In conclusion, to quote Sir Humphrey Gilbert, the 16th century adventurer, explorer and soldier—He is not worthy to live at all, who for fear and danger of death shunneth his country’s service or his own honour, since death is inevitable and the fame of virtue immortal—were these words on Scott’s mind as he lay dying in his tent with his two companions? Was his immortality assured by dying, rather than returning home a defeated man? He certainly knew of these words as they are to be found in his journal.’

Read an edited transcript Noyce’s talk:
Hoosh, Dogs and Seal Meat: The Role of Food in the Race to the South Pole

To commemorate the centenary of the Terra Nova expedition and celebrate its achievements the Natural History Museum, London, the Canterbury Museum, Christchurch, New Zealand and the Antarctic Heritage Trust, New Zealand, have collaborated to create Scott’s Last Expedition, an international travelling exhibition.

This online debate follows on from talks held at the Australian National Maritime Museum on 31 July 2011 by Professor Edward Larson and Diana Noyce  in conjunction with the exhibition Scott’s Last Expedition. The talks generated a lot of debate and strong opinions across the floor about the successes and failures of the Terra Nova expedition.

We invite you to contribute to the conversation… Share your comments.