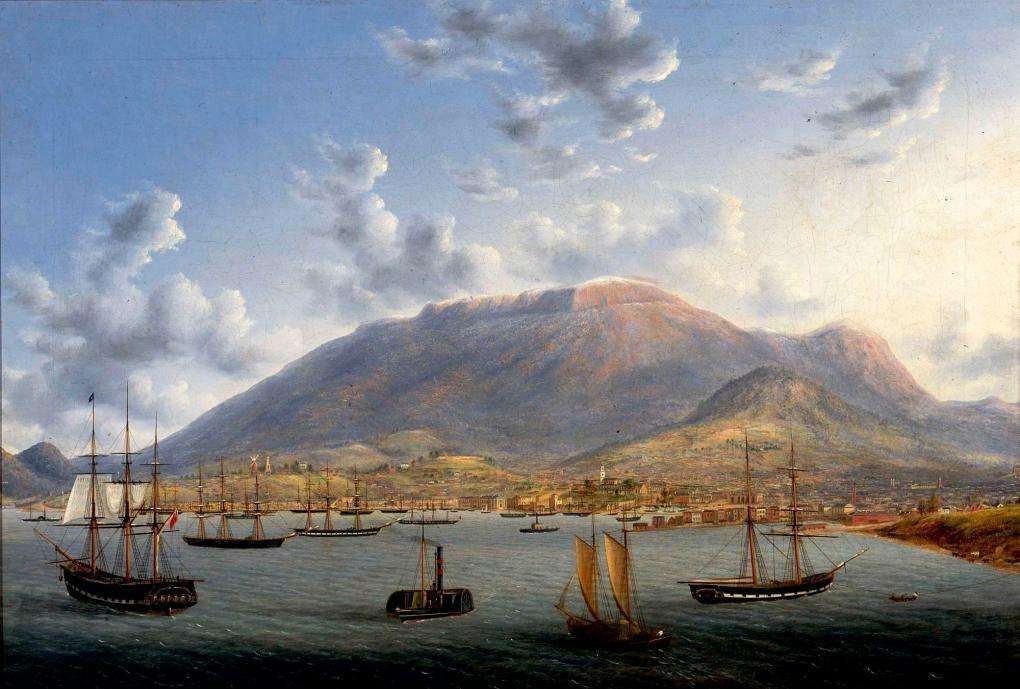 This oil painting by Henry Gritten depicts the settlement of Hobart on the Derwent River in Tasmania, below the impressive shape of Mount Wellington, circa 1856. A number of Hobart landmarks are also recognisable, including Constitution Dock, Victoria Dock, Cowgills windmill and St. Georges church. Convict Ann Norman would have seen a similar view, though of a less developed settlement during her years as a convict, circa 1830-1845. ANMM Collection 00018553.

Clambering up the ladder from her convict quarters, Ann Norman would have come  onto the deck of the transport ship Persian and embraced the warm rays of the sun, the fresh southern air and a vista of Hobart Town nestled under Mount Wellington. Ann’s thoughts about her new home may well have been cut short by the barking voice of Superintendent Patton, ordering the convicts ashore.

Ann’s vista of Hobart Town, crowded with convicts and their overseers and settlers, may have turned to the distance and the unforgiving Australian bush. Looking away from the small settlement, Ann would have seen the ships and harbour waters and beyond, to the great blue expanse that was the Southern Ocean. Possibly, like many convicts, clutching an engraved penny to her chest – a token of love – Ann may have felt the pangs of sorrow and heartache ripple through her, not knowing when or if she was ever going to see her beloved again…

The convict indent of Ann Norman is an exciting new acquisition for the Australian National Maritime Museum. The indent was an official government record kept by the Convict Department of Van Diemen’s land (later known as Tasmania). It is in effect a record of Ann’s life as seen through British authorities, from her sentencing at age twenty in 1826 to the final entry in 1841. This unique object presents a rare and tangible link to Tasmania’s convict past. Furthermore, Ann’s indent offers an intimate insight into the plight of convict women in the British Empire. 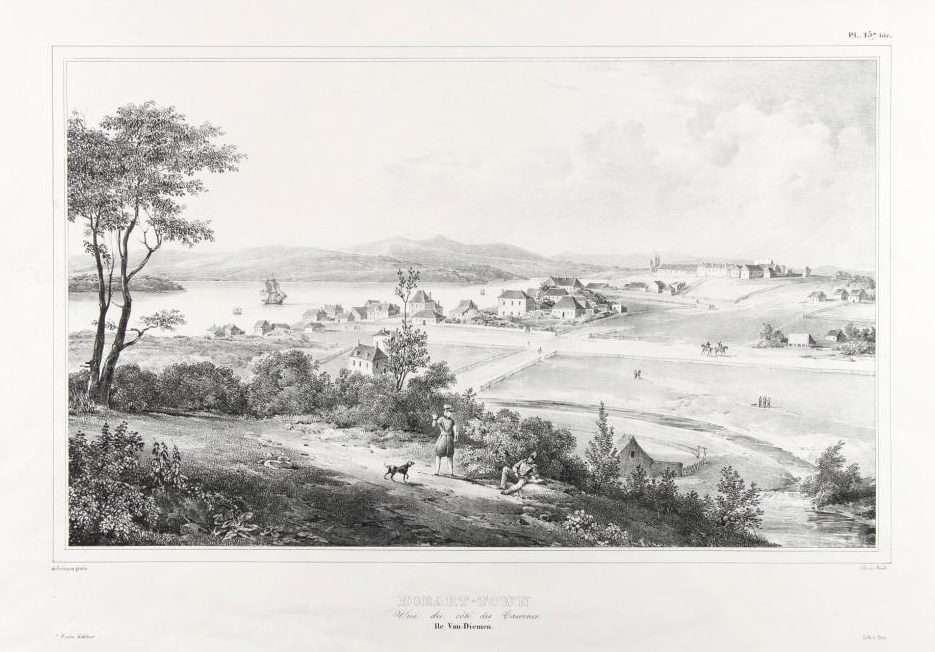 Hobart Town, circa 1827. View of Hobart towards Anglesea Barracks; a lithograph by A. Bes based on original artwork by Louis de Sainson. ANMM Collection 00031288.

Convicted and confined to the prison hulks

Convict transportation to the Australian colonies was implemented as a more productive alternative to the crowded prison hulks anchored throughout Britain, at key ports such as Portsmouth. The population boom from the Industrial Revolution, combined with severe penal codes and the lack of any real social welfare system, forced many of the poorer classes to resort to petty crimes to survive. (For Young Adults at the time, there was no Centrelink or that $50 from mum to get you to the end of the week!)

As a result, thousands of petty criminals were caught, convicted and punished, often chained down below deck on prison hulks and later transported on convict ships to the Australian colonies. Between 1788 and 1868, more than 168,000 men, women and children were transported to Australia as convicts from across the British Empire due to policies that seem today to be incredibly harsh. 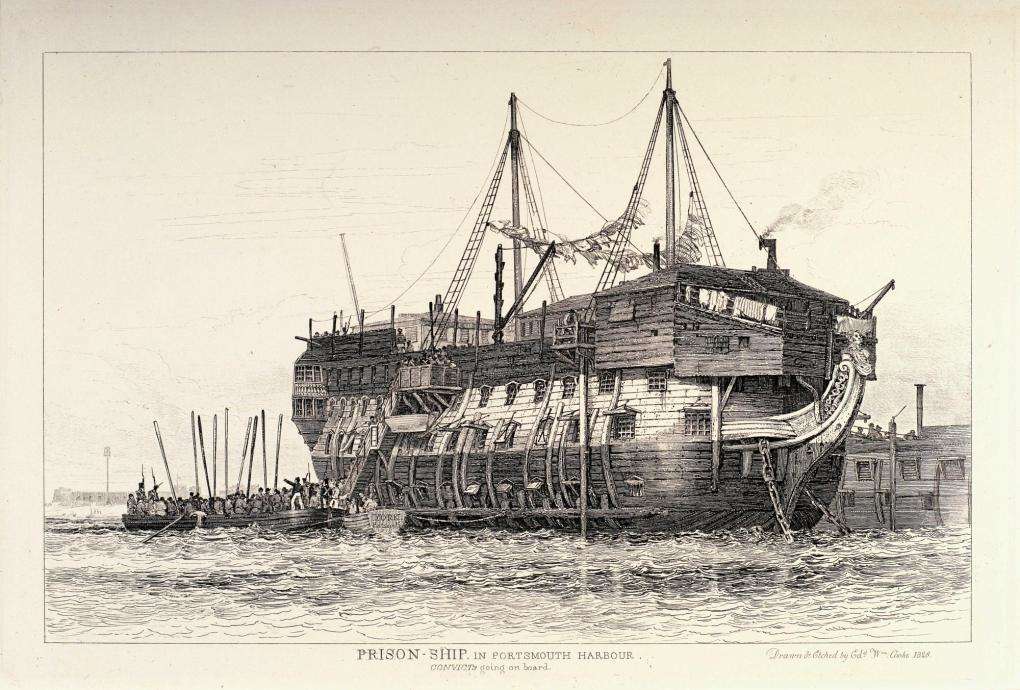 Former HMS York was converted into a ‘hulk’ to house the overflow of convict prisoners. ANMM Collection 00005539.

Although not explicitly mentioned in the indent, it is quite likely that our Ann Norman spent time imprisoned on one of these prison hulks in between her initial sentencing in Cambridge on 20 October 1826 and her subsequent deportation to Van Diemen’s land, from London, on 14 April 1827.

With increasing numbers of convicted persons, the conditions on these floating prisons often became cramped and unsanitary. Disease and malnutrition were rife among the prisoners. The eight-person shared hostel dorms on your recent European trip may not have been ideal, but are luxurious compared to the prison hulks.

Ann Norman’s record is an excellent example of the identification system that was in place before the widespread use of the photograph.  At the top of the first page it reads in fine cursive script:

And these physical descriptions continue:

With such a description however, it is difficult to swipe left or right. There are many questions about Ann left unanswered. Who was this five foot one and a half inch tall ‘housemaid’? Did she spend time on a prison hulk like the York? Why was she sent to Australia? Did she fare well in the harsh convict conditions in Van Diemen’s Land? Did her crippled hand mean she found it difficult to find work to survive?

We must read on. What makes these convict indents and descriptions so interesting is they often do answer such questions and present detailed personal information on members of the lower social classes of British society, offering very rare insights into history.

In what could (cheekily perhaps) be thought of as the early 19th-century version of a dating profile bio, we learn that Ann Norman was born in 1806 near Cambridge and that her first offence was breaking into a house, for which she received a 6 months sentence. It is highly probable that some of this sentence was served on a prison hulk similar to the HMS York. 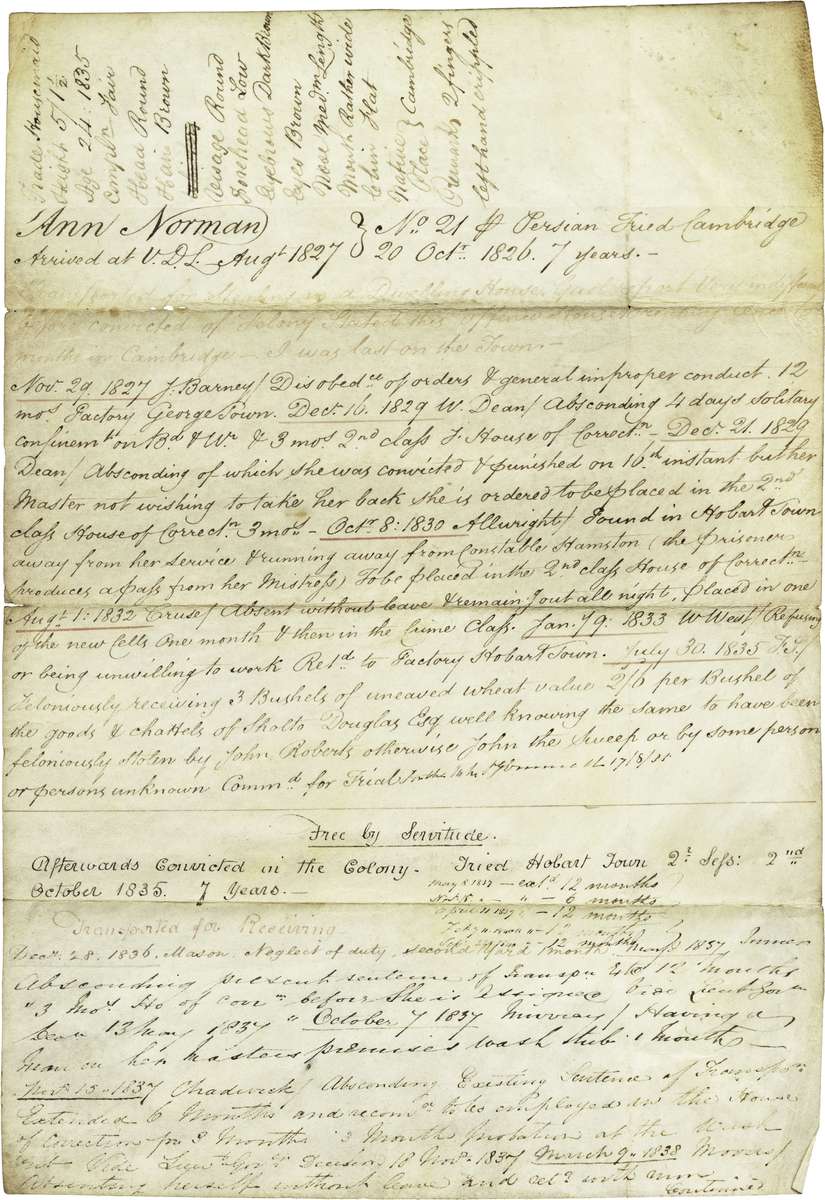 The convict record for Ann Norman. It is written on vellum (parchment) and details her prison records and transportation to Van Diemen’s Land. ANMM Collection 00055166.

In 1826, after getting caught again – this time ’stealing in a dwelling house’ –  Ann was sentenced to convict labour in Van Diemen’s Land and departed London to this remote  corner of the British Empire on the convict transport Persian.

So here we have an intimate record of a twenty-year-old convict girl, not much younger than myself or any other unemployed arts graduate reading this blog post. Presumably, she resorted to petty theft to survive, was caught and ended up sentenced to seven years convict labour on the other side of the world, unknown and isolated from family, friends and familiarity.

Seven years convict labour… that’s definitely not my idea of a gap year! 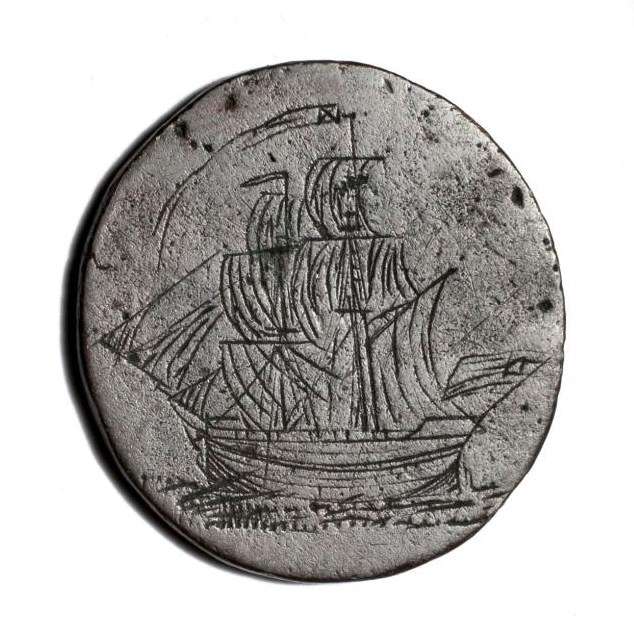 A convict love token. These tokens were engraved from British coins and kept to comfort their recipient, and keep alive the memory and relationships of a transported convict. One wonders about Anne’s family and friends, her loved ones… if she had a sweetheart. Was twenty-year-old Ann gifted a token similar to this one? ANMM Collection 00040473.

There was no Snapchat or Instagram for Ann to keep in touch with her loved ones, nor was there any option of a June/July Europe trip with a stopover in London. For many convicts, being sent to the colonies meant they were unlikely to return to home following their sentence and they were effectively stranded on the other side of the world.

So what happened to Ann Norman?

On 29 November 1827, three months after arriving in Van Diemen’s Land, Ann is recorded as having ‘disobeyed orders and general improper conduct’ and received 12 months in the Women’s Factory at George Town as punishment.

Ann’s behaviour deteriorated during her time at the George Town. Two years later, on 16 December 1829, she was caught for ‘absconding four days’. Her master did not want to take her back, so Ann was placed in the harsher 2nd Class in the House of Correction. Then in October the following year, Ann was found ‘in Hobart Town away from her service, running away from Constable Hamston.’

It is clear that the young female convict was struggling to adjust to her convict life in Van Diemen’s Land. Perhaps too there was a certain unwillingness to do as the authorities wished. Was Ann merely keen to act as the large majority of us twenty-something-year-olds do, and rebel against figures of authority? She attempted to escape again (and again) but was caught and further punished each time. By August 1832, Ann was found ‘absent without leave and out all night’, after which she was ‘placed in one of the new cells one month and then in the crime class’. Ann’s infringements would continue, including ‘January 19th 1833 … Refusing or being unwilling to work removed to Factory Hobart town.’ 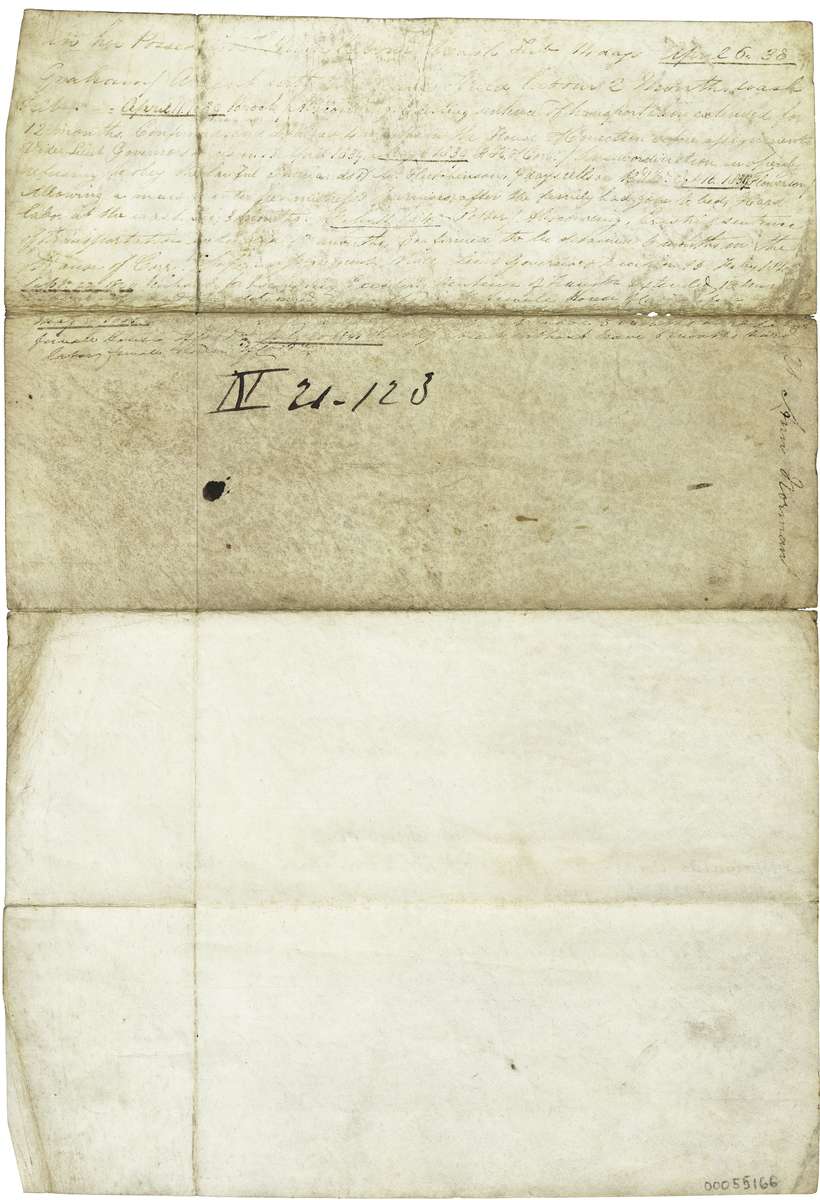 Verso of the convict record for Ann Norman. ANMM Collection 00055166.

Free by servitude…for a time

Separating two blocks of writing in her indent are the words: Free by servitude. While doing further research, I stumbled across a column from a page in The Independent newspaper. Going down the list of names there is a Thomas Cooling, William Hancock, Elizabeth Payne, but third last was our Ann Norman. Despite her fiery disobedience, Ann was awarded her freedom following the end of her seven-year sentence. 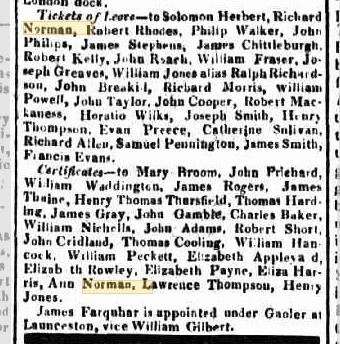 Despite her fiery disobedience, Ann was awarded her freedom following the end of her seven-year sentence, as reported in The Independent, October 1833. Via Trove.

Unfortunately, Ann was still not willing to give up her criminal past. Continuing down the nearly two-hundred-year-old vellum manuscript, we are presented with the news that two years later, Ann had been caught both stealing and receiving stolen wheat.

After another bit of detective work, I found a column from the Colonial Times dated Tuesday 6 October 1835:

‘Hobart Town, Friday October 2, 1835 Jury Trials
Ann Norman was charged with stealing three bushels of wheat, the property of Major Douglass ; and in a second count, with feloniously receiving the same, well knowing it to be stolen.
Verdict – Guilty of receiving. Sentence – To be transported beyond seas for seven years.’ 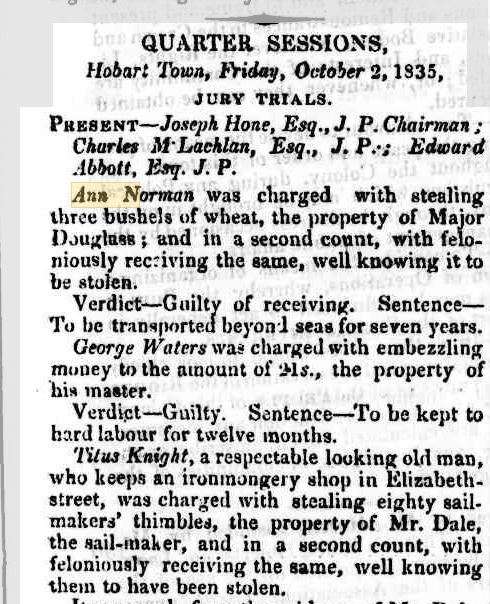 This editorial from the Colonial Times features the jury trials from the previous Friday – with Ann’s at the top! Via Trove.

Ann Norman endured a further seven years of convict life and again, her records continue with numerous infractions and punishments. One rather risqué report can be found on 16 October 1839, when Ann was caught ‘allowing a man to enter her mistress’s premises after the family had gone to bed’.

Her record on this convict indent continues up to 1841 where it stops. Ann would have been 34 years old. What happened to Ann Norman? Is this the last that we are to hear of her?

Not all is lost

Our Ann Norman, the convict girl from Cambridge with her crippled hand resurfaces in the history of Van Diemen’s Land: This time in the 1843 register of Marriages in the District of Hobart.

At the bottom of the page we have ‘Marriage number 502’, clearly showing the marriage of a Robert Clegg and one Ann Norman, dated 23 August 1843. Robert was a 45-year-old widowed farmer and probably an ex-convict. However, scribbled in Ann’s column is a more sombre profession: ‘Spinster’. This was a term used to describe single women considered past a ‘proper’ age to marry.

At the bottom of the page we have ‘Marriage number 502’, clearly showing the marriage of a Robert Clegg and one Ann Norman, dated 23 August 1843. Ann is listed as a spinster by profession. Via Tasmanian Archives Online.

Sticking it to her ‘spinster’ label, year after being granted her freedom (for the second time!), Ann married Robert and we assume they shared the rest of their lives together. We can even entertain the thought Ann married for love, not just economic and personal safety.

As for the rest of Ann’s life, we are left guessing – maybe she started a business, a family with Robert, or even returned to home to England… It is all rather unclear, the finale of our tale is buried and seemingly lost to history – unless a family history researcher or descendant might read this and complete my story of convict Ann Norman?!

What is clear is the significance that individual convict indents can add to understanding Tasmanian and Australian history: the very personal accounts and experience of the period of convict transportation to the Australian colonies.

View all posts by Jonas Groom→
Posted in: History and Colonisation , From the collection
↑