Cannon of Mutiny on the Bounty fame to be offered in Scottish auction.https://t.co/QEYirjvOc4 pic.twitter.com/TyHAIbeAgh

The fourth cannon from HMS Bounty?

A few days ago a Scottish newspaper ran a story about an upcoming auction of a cannon from HMS Bounty set to make £500,000. According to the article, the cannon was gifted by JR McCoy (the Pitcairn Island President) to a British sea captain who stopped at Pitcairn Island in 1898 and it subsequently made its way to Scotland. The article included three pictures showing a badly corroded gun missing its trunnions and cascable but with some surviving details of reinforce rings and the touch hole.

The Bounty was fitted with four 4-pounder cannons for the Breadfruit voyage and in 1999, as leader of the Pitcairn Project and working with the Pitcairn Islanders, I led the team that raised the last cannon from the site in Bounty Bay where the ship was burnt in 1790. With the agreement of the Pitcairn Island Administration the cannon was transported to Australia where it was conserved by the Queensland Museum, at its Museum of Tropical Queensland campus in Townsville, and then returned to Pitcairn where it now holds pride of place in the island’s museum. 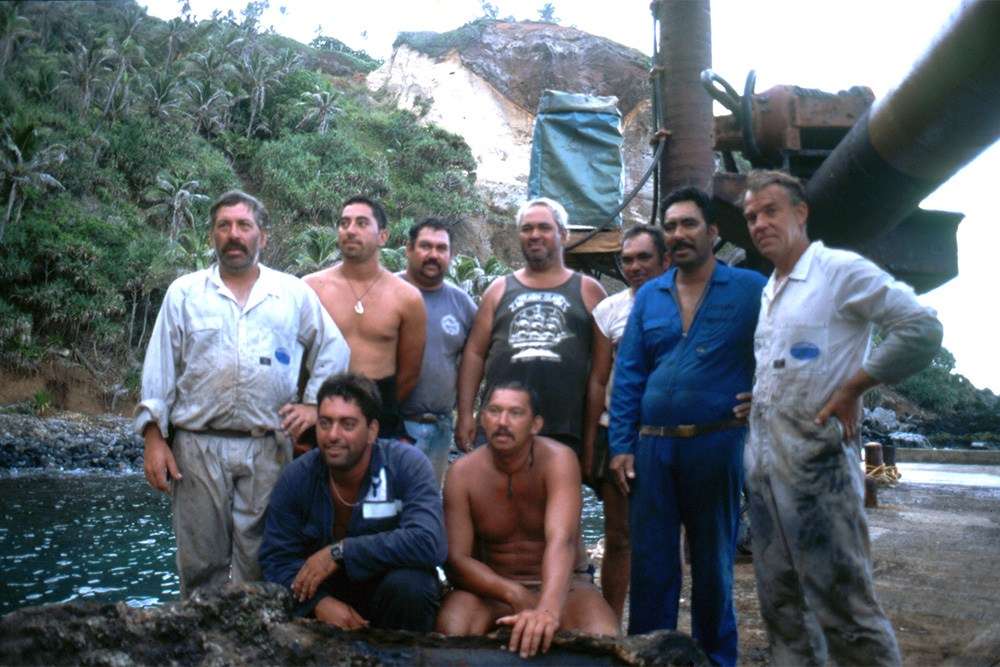 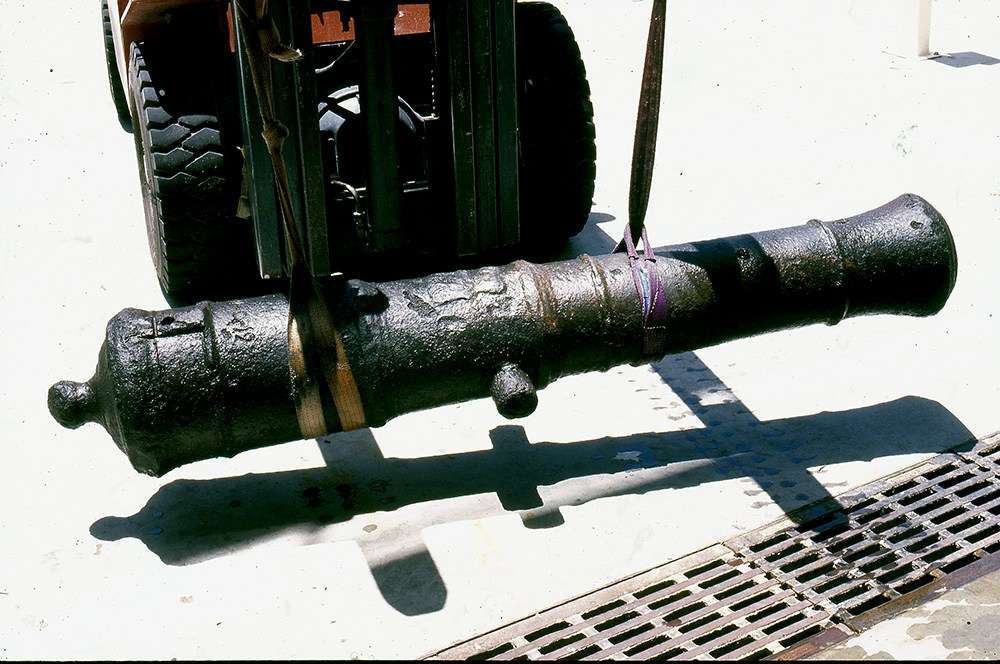 Bounty cannon after de-concretion at the Museum of Tropical Queensland, 1999. Image: Nigel Erskine. 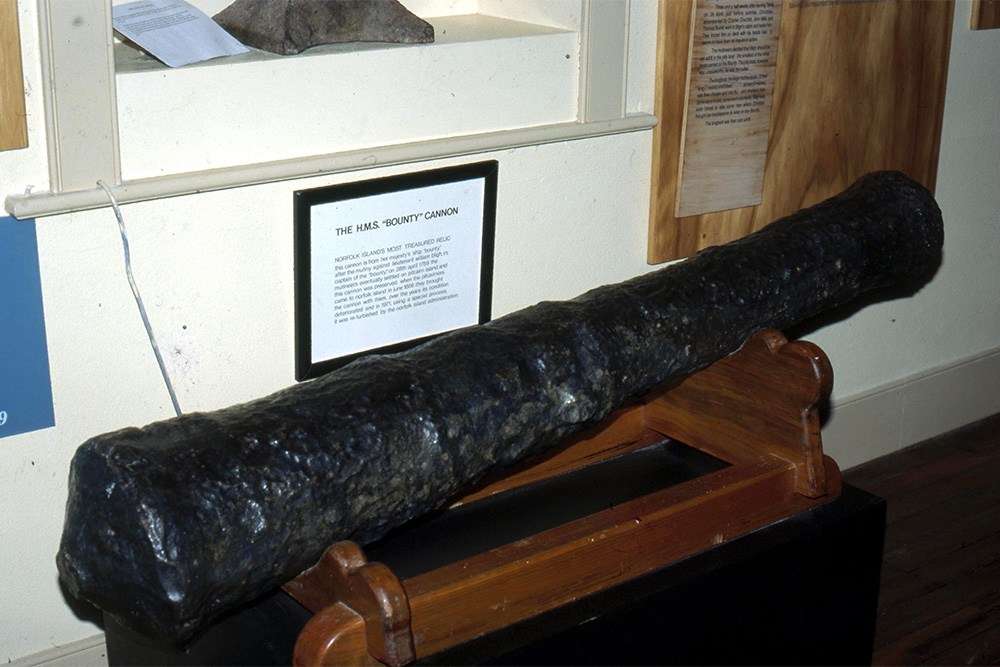 Apart from this Bounty cannon, the whereabouts of two others are known. Two cannons were raised from Bounty Bay in 1845. One of these now in the Norfolk Island Museum, was originally mounted on the cliffs below the settlement at Pitcairn (Adamstown) and fired on ceremonial occasions. When the entire population of Pitcairn Island was transferred to Norfolk Island in 1856, the cannon also made the trip. The whereabouts of the second cannon raised in 1845 has remained a mystery for many years, with no record of its departure from the island until now… 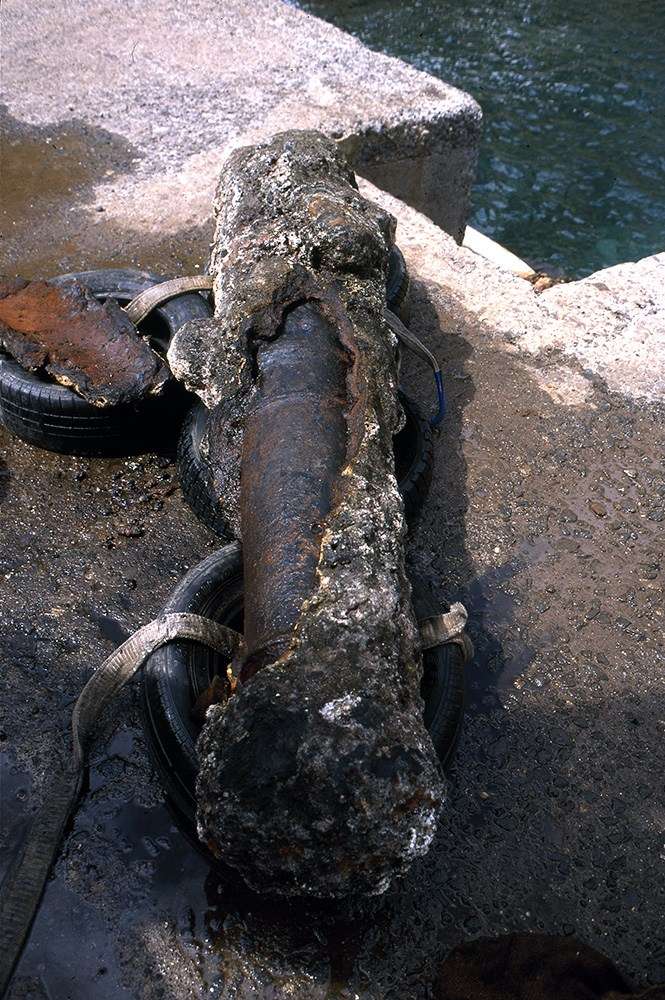 Bounty cannon when it was recovered from Pitcairn Island, in 1999. Part of the concretion had been removed prior to taking this photograph, which shows the state of the cannon beneath the concretion. Image: Nigel Erskine.

Details in the date

The auction description for the Scottish cannon states that the gun was brought to Liverpool in 1898 by the sailing vessel Orealla owned by the British shipping firm of Sandbach, Thinne and Co of Liverpool and later transported to Little Cumbrae Island, off the north Ayrshire coast of Scotland where it remained for many years. The gun comes with a letter apparently given to Captain Stewart of the Orealla dated 5th April 1898 at Pitcairn Island stating: “This is to our knowledge the last of the HMS Bounty’s armament. This gun was fished up in Bounty Bay, Pitcairn Isle where she was wrecked in 1789. Signed JR McCoy President. Great Grandson of William McCoy, one of the original mutineers of the HMS Bounty and President of Pitcairn Isle.”

A curious feature of the letter is the incorrect date given for the destruction of the Bounty, which (as every Pitcairner knows) was 1790. In the letter, the date has been entered in a different script.

A third cannon, which was raised from Bounty Bay in 1971, sits outside the Pitcairn home of Len Brown. Neither the cannon in the Norfolk Island Museum nor the cannon outside Len Brown’s house had any conservation at their time of original recovery from the sea, and like the cannon shown in the Scottish newspaper article, have lost much of their surface details. So my interest was aroused!  Was the cannon in Scotland the missing fourth Bounty cannon? Could the research I had previously carried out on the other three cannons throw some light on the question?

One of the Bounty cannons outside Len Brown’s home at Pitcairn Island. Image: Nigel Erskine.

The cannon recovered from Bounty Bay in 1999 was encrusted in a thick layer of concretion. When iron objects are left in the sea for a long time, corrosion occurs – over time forming a layer of corrosion materials encapsulating the object. This concretion effectively protects the surface of the object, so that even objects immersed in the sea for hundreds of years, may retain fine surface details. Certainly, that was the case when we removed the concretion from the cannon back in Australia in the first stages of the conservation process.

Identification of the Bounty cannons

With the concretion removed, the cannon could now be seen just as it must have looked over 200 years earlier on the Bounty’s deck. Revealed on the top of the gun was the crowned cipher of George III, with a large broad arrow mark and the weight markings 11 – 0 – 19 just forward of the vent hole –  indicating an original weight of 11 hundredweight 0 quarters 19 pounds [567.45 kg]. Once partially cleared, the cannon’s bore was found to have a diameter of 87mm, which while indicative of extreme windage, could certainly accommodate the four pound cannon balls of 78mm diameter also recovered from Bounty Bay. The length of the gun, measured from the back of the base ring to the face of the muzzle was 5 ft 6 in [1.68m] and together with the weight and bore measurements, identified the cannon as a short 4 pounder. 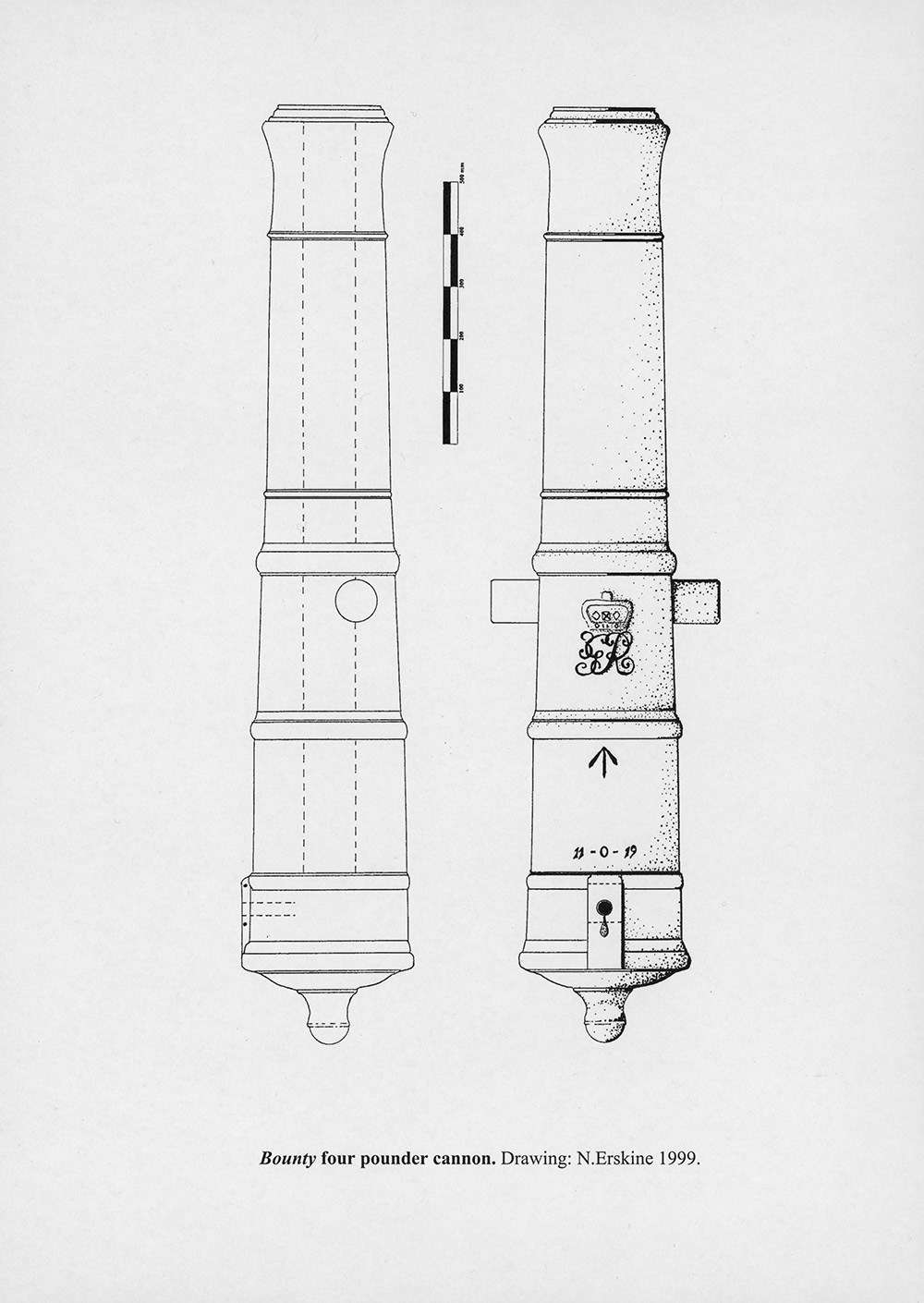 One feature of particular interest was evidence of repair to the vent.  It was common for cannon that had seen considerable service to suffer from flame erosion and to require bushing (bouching). The solution was to bore out the vent, tap it (create an internal thread) and then screw in a wrought-iron or copper plug drilled with a new vent of the correct size. The vent of the cannon raised in 1999 shows just such a repair – consisting of a 25mm (1”) hole threaded coarsely and containing the residue of an iron plug. The plug was completely corroded and the vent was found to have an internal thread of five threads per inch. 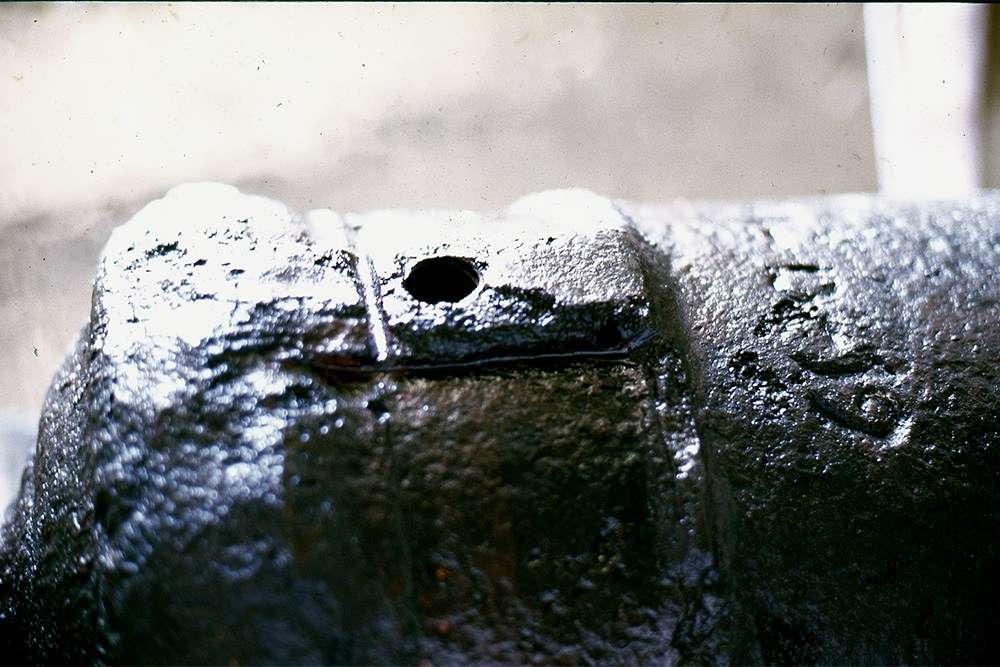 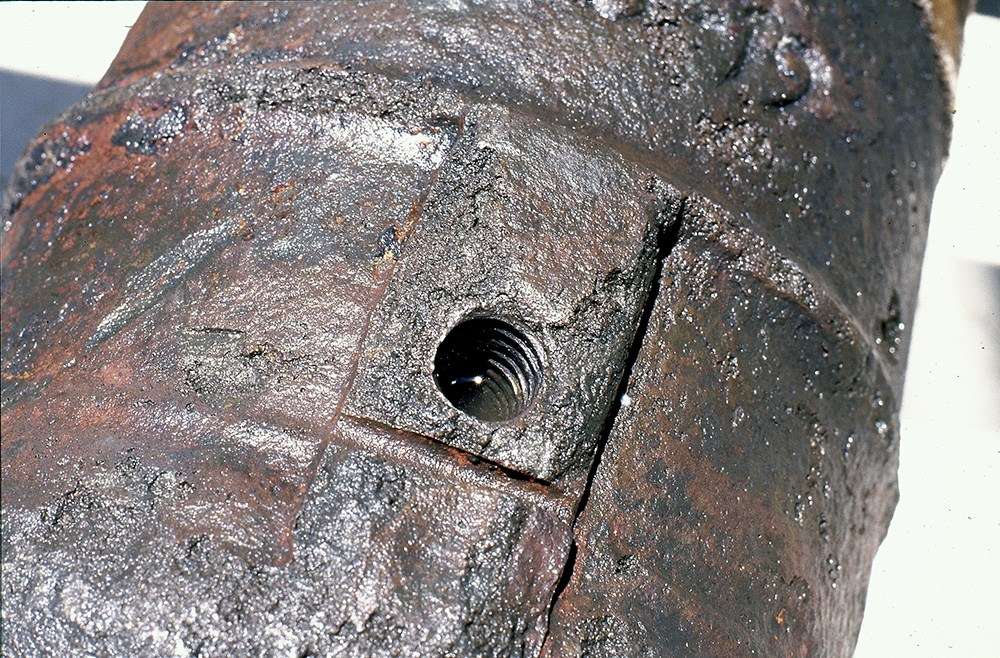 A further feature of the vent patch was evidence that the cannon had been fitted with a flint-lock mechanism for firing the gun. This is evidenced by two 8mm (5/16”) parallel holes drilled horizontally through the patch 75mm (3”) apart.

Later, when Director of the Norfolk Island Museum (2000 – 2003) I was able to examine the Bounty cannon in that museum’s collection and found that too showed evidence of bushing the vent and holes on the vent patch for a flint-lock mechanism.

Unfortunately, the cannon outside Len Brown’s house at Pitcairn has corroded badly, and what remains has been painted with a thick bituminous paint which further masks the gun – making it impossible to see what may remain of the vent. Despite this, a comparison of measurements taken off the three cannons reveals their common dimensions.

Do the pieces of this historical puzzle fit together?

The details of the provenance of the cannon to be auctioned in Scotland, provided in the newspaper account, are fairly brief. James Russell McCoy was the Pitcairn Island President in 1898 and Lloyd’s Register lists a Captain Stuart as master in 1898 of the 1843 ton iron ship Orealla owned by Sandbach, Tinne & Co., registered in Liverpool.

The letter detailed in the auction description provides a further link in the chain of evidence indicating that the Scottish cannon is the long-lost fourth Bounty cannon but a comparison of it with the other three Bounty guns should identify if it shares the features common to them and possibly provide the final proof.

And finally just, to correct the errors in the original newspaper headlines that caught my attention: The auction estimate on the cannon is £5000 – £10,000 and the name of the auction house is not Thomson Riddick, but Thomson Roddick Auctioneers & Valuers.