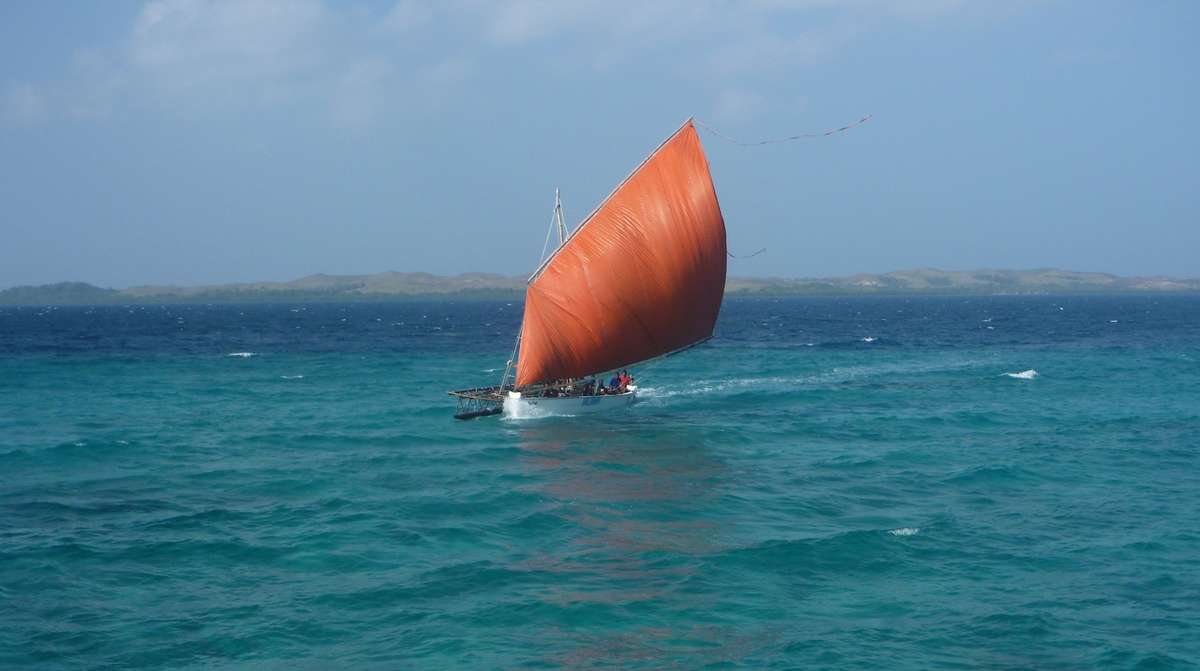 A sailau coming to a village. Image: David Payne / ANMM.

David Payne, Curator of Historic Vessels, is currently on a research trip in remote Papua New Guinea to document traditional watercrafts and their construction techniques.

Coral Haven is at the eastern extremity of the Louisiades Archipelago in Papua New Guinea. Yesterday afternoon it was a windswept place with rain squalls – after all, the south east trade winds blow strongly in August. To get here involves travelling into the trade’s rough seas, passing through the Engineer Group and then the Conflict Islands, having started out from Alotau in Milne Bay about eight days ago. Today it is time to leave our sheltered anchorage on Nimoa Island, beside Sudest Island down at the eastern end of Coral Haven, and start the return journey.

In 1849 HMS Rattlesnake and HMS Bramble were in Coral Haven, and the impression given by the wonderful sketches and illustrations done by the artist on board, Oswald Brierly, shows a place thriving with activity – and it’s all happening around canoes.

I have come this far as part of a small team investigating the region’s art with a particular focus on one of the culture’s key forms of art, expression and transport. Today’s outrigger canoes carry on the traditions seen by Brierly, and we are studying the crafts’ more recent developments. My role is to document examples of the craft we find with sketches, field notes, dimensions and draft plans, and on return to Sydney, draw up the big scale plans and a report.

In many ways, it’s an audit of what exists, but primarily a chance to measure and document them in more detail than has been done before.  The equipment for the onshore work includes tape measures, a string line, note book, camera, and a 2 x 1 straight edge (selected from the wood pile at Nako Marine Alotau). The drawing board is the saloon table when we are not eating…and when the boat is not rolling madly at sea.

There are three of us in the team came together as group on Tuesday the 1st of August; Dr Harry Beran a noted specialist in the Massim Culture, his friend and enthusiast John Greenshields who has lived in PNG in the past, and myself as the canoe specialist. We had hardly got settled at Naptana Lodge before we were heading out about 20 minutes away to the head of Milne Bay to inspect war canoes – called gebo – that are still being made. 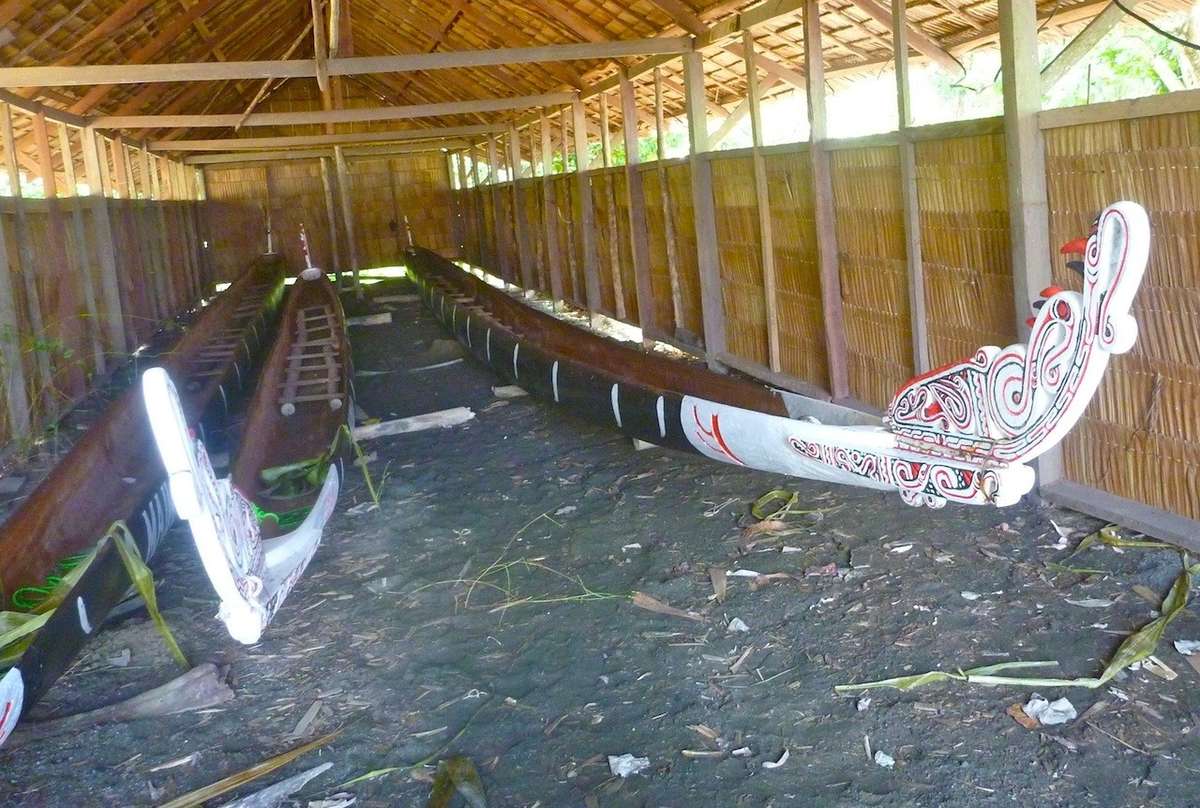 In the end it took two goes, on that first visit we were able to get permission to photograph and measure one of the canoes. But on the next trip a day later, we met the elder Kai who could give us much more background and understanding of the canoes, the motifs on the bows and sterns.

On Tuesday evening, Harry gave a talk at the Massim Museum in Alotau, managed by Australian Joan Winter, the Director, Curator and everything else. She had on display two smaller canoes that had come to previous canoe festivals and gatherings. I asked if I could record them for her, and did so on Wednesday morning.

On Thursday  3rd of August, we left late morning, motoring out into choppy conditions before stopping at Samarai island for dinner, and the opportunity to meet an Islander with information on some of the canoes. There a chance to snorkel with manta rays nearby. To help pay for the charter of the vessel, the MV Curringa from Discover Milne Bay, we have five friends of John and Harry along, enjoying the scenery, snorkelling and catching fish. For them, it’s an opportunity to see some remote places where the tourists never go as we search out more canoes.

We then went overnight in very rough conditions to our next stopping point for a breakfast break, an atoll with clear water, before motoring another five hours for a night time stop at an uninhabited atoll. On the way, we saw two sailau (the modern canoe in use, which features a single outrigger hull form, planked over a keel made from a tree’s trunk, but fitted a more modern lateen style foresail rig).

On the Sunday at Duboyne Lagoon, Panaeati Island. We went ashore at or anchorage off nearby Panapompom Island and met a sailau builder named Willem and saw a canoe under repair as well as another one under construction. We learnt a lot about the building process, and then over two hours it was possible to measure up an 8-beam sailau to draw a plan.

After a cup of tea, a coconut and some fish, a sail on a sailau was organised for us and we went around to an island nearby. These things can move and they sail close to the wind; it was a great experience and showed me how they were handled.

As we landed we sailed over the wreck of a Japanese Zero fighter ditched in the early days of World War II, so the snorkel team went back to look at that, while I met up with two boys playing with their model sailau.

Onboard the Curringa, Harry and John were meeting with some of the older people to talk over what they recall of the original canoes that were built here until about the 1960s when the sailau became common. They also brought old family artefacts with them. We had arrived here late Saturday, but in time for Daniel Duncan to come out to the boat, he had been expecting us, and he then kindly began to organise these meetings and other events for us.

Next stop was Brooker Island, and a much larger 10 beam sailau was ashore, giving me an opportunity to document another example of the craft, and almost 3 hours later, all spent out in the hot sun it was captured on paper as notes, ready to draw out that afternoon. The villagers helped, we all dragged the boat up the beach a few metres to get it out of the tide zone. They helped hold the tape measure, winding up the string line, bail it out – one even climbed the mast so we could get its height. 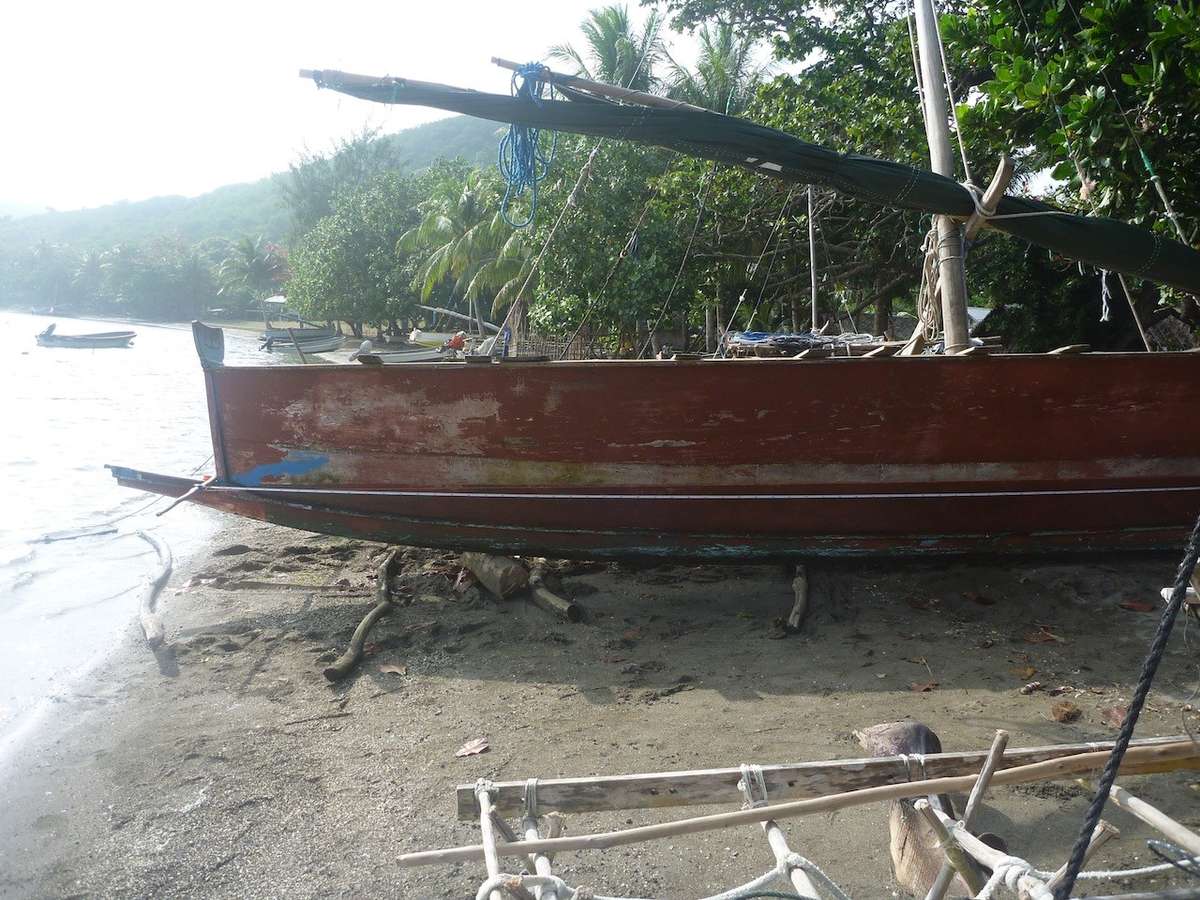 The end of the big sailau. Image: David Payne / ANMM.

From Brooker we moved east up the archipelago, always going into the trade winds. We stopped at a number of small islands to talk to the villagers about the canoes. They enjoyed having visitors as few people ever come this far, and then show this much interest as well.

In our documentation we have captured a variation in the hull form of the sailau on the islands just as we approach the Haven. It’s made from a solid log, no planking for the strakes, and no washboards either. The hull is basically a big version of the small canoes common in the area.

And today, just a few hours into the morning’s passage, we have found many more of them. Pulling into Sabara Island, the narrow and exposed beach has a dozen craft pulled up, two 8 beam sailau and the rest were smaller ones without the washboards and strakes.

We found out it was St Clare’s Day and it is customary that after a service with numerous baptisms, the locals hold a race across the windy passage and back, where the winner gets a pig. More sailau arrived, skidding in on the fresh breeze – there must be over 25 crammed ashore by the time we left. 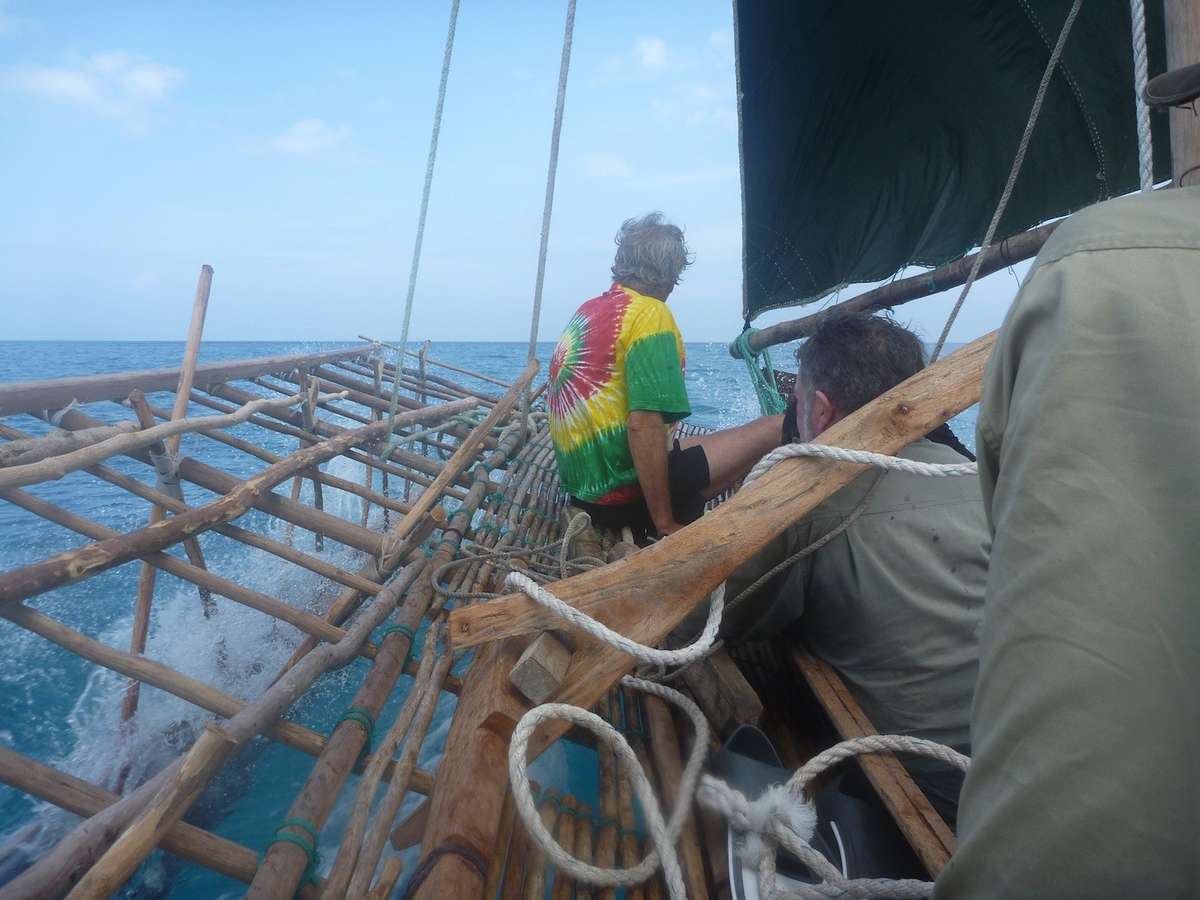 On board the sailau. Image: David Payne / ANMM.

All this is happening in an amazing setting: tropical New Guinea islands, coral atolls and reefs in the Solomon Sea. Seabirds are everywhere: terns, frigate birds and ospreys, while ashore there are parrots. Fish are abundant and we seem to have lived on fish, rice and bananas.

The turquoise and azure sea close to shore contrast sharply against a deep blue channel beside it, the lush green vegetation and small villages at every stop are filled with free ranging pigs, chooks and dogs just roaming around as the villagers get on with daily life.

Our skipper, Daniel Obedi, always organises for us to meet the head of the village first and explain our reasons for the visit, and they accommodate us without any problems (some even knew in advance that we might drop in). The children cram together for their photograph, and a number of the adults have enough English to have a conversation about what they do and what we are doing.

In return we give practical gifts, things we have brought with us: clothing, books and pencils for the school, food and occasionally some cash. A particularly favoured gift from us is the betel nut.

Whilst we radio in our position regularly other contact, when it can be made to work from the three widely space communication towers along the length of the islands, is very unreliable and only a cell phone SMS seems to get out to the rest of the world.

So this is coming to you from Alotau, where we are re-provisioning, refuelling, doing some running repairs so we can head north east to Egum Atoll, the Marshall Bennetts, Trobriands and other islands to see a different style of canoe, the nagega, and once again record things as well as we can.

Did you know that you can explore Australian Register of Historic Vessels online?