Sheet music in the ANMM Collection.

It is so easy for us today to access music anytime, anywhere and in any style that it is difficult to imagine that music was still influential in people’s lives prior to radio, stereo, records etc. Music was played live but it was also widely distributed in the form of sheet music. Cheaply produced in large quantities sheet music meant people could play or learn the songs themselves and the song could be sung in a wide range of venues including homes, pubs, street corners, wharfs and music halls. 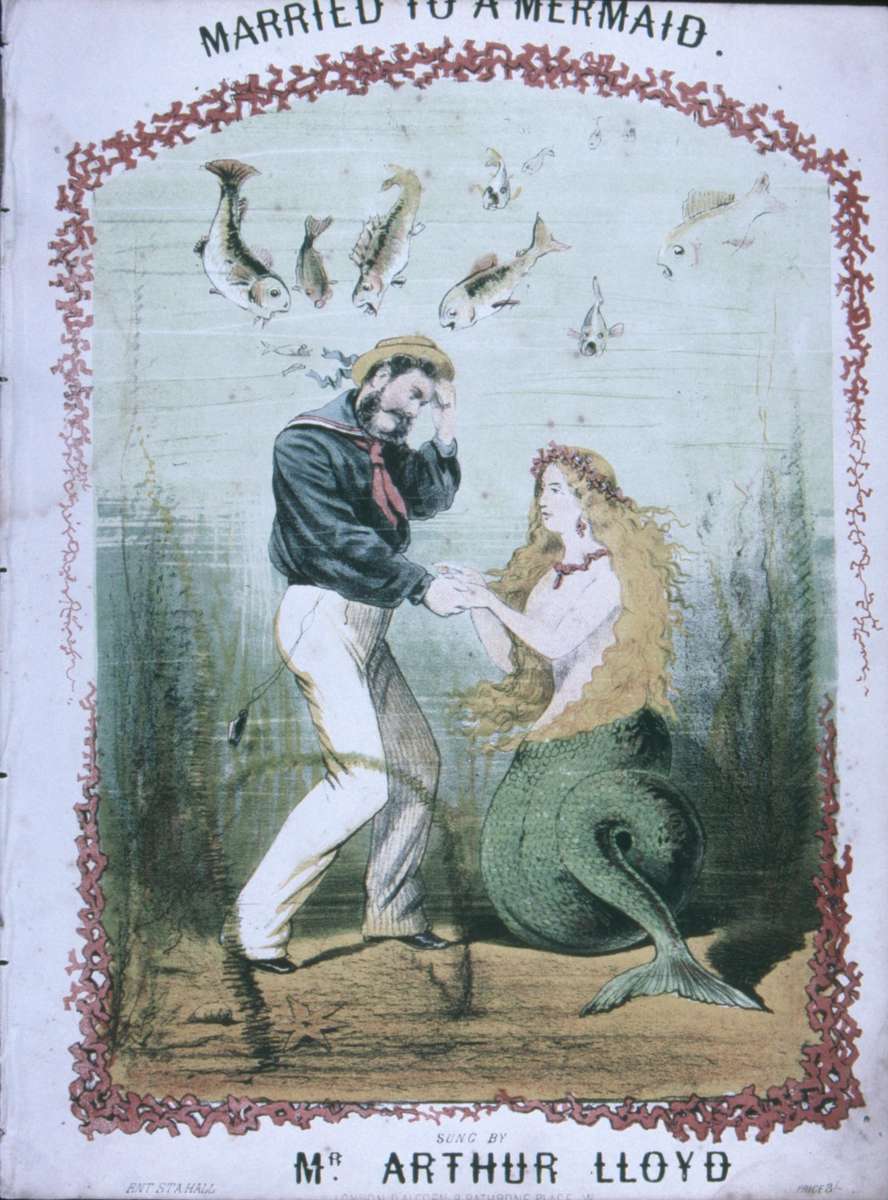 Singing of the romance of the seas by those ashore. Even the hope of meeting a mermaid wife. ANMM Collection 00028262.

The museum has a wide range of sheet music in its collection which provides an insight into the popular culture and social values at the time of their production. Cheap to purchase with snappy titles, and sometimes illustrated, they were popular purchases with the general public. 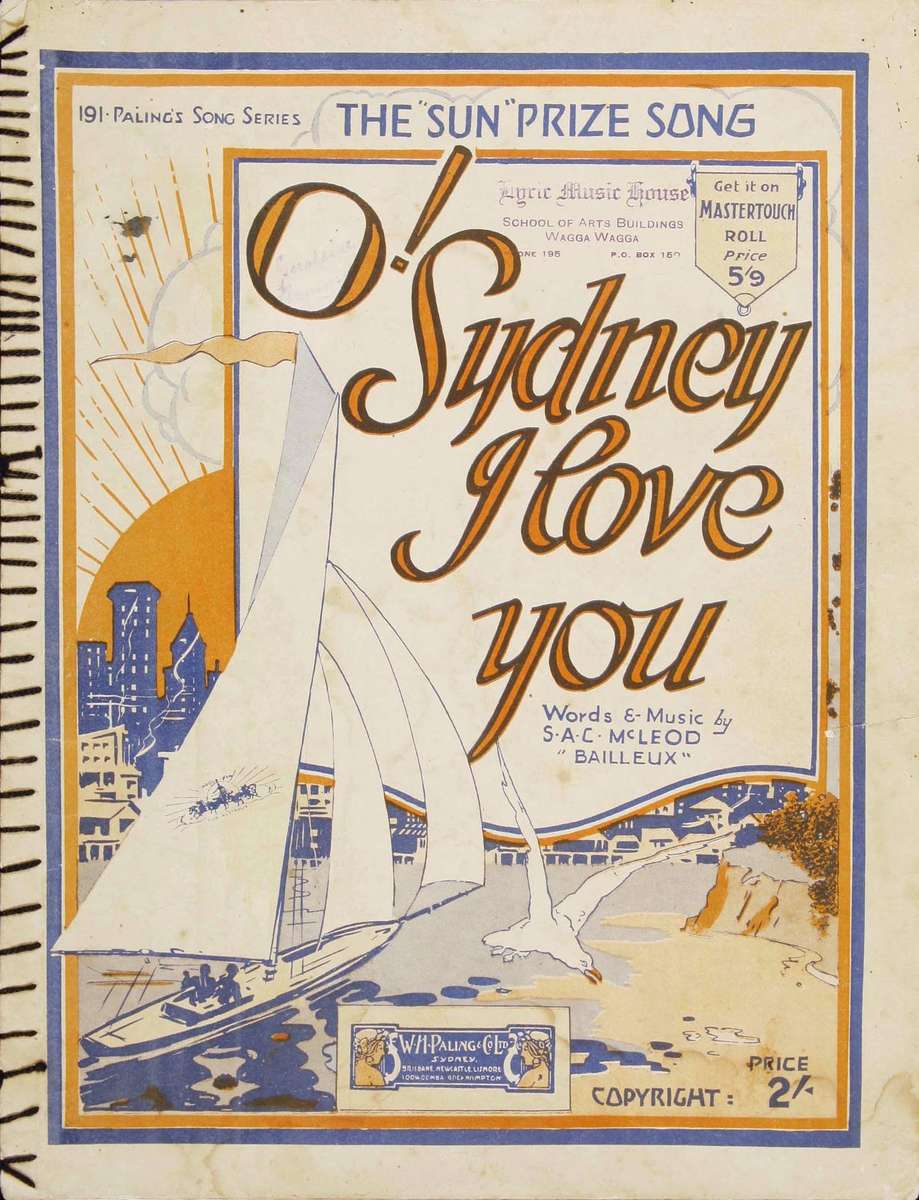 Songs about your hometown were always popular. This version was a prize winner from a newspaper competition. ANMM Collection 00040726.

Many songs have a strong maritime theme – recounting the drama of life at sea, the sad farewells and legends of the deep. More patriotic titles such as ‘Good Old Australia – The Greatest Patriotic March of the Age’ were used to stir up public support and patriotism for a country at war or to remind Australians they were very much part of a bigger picture thanks to Britain and the United States. With no television and with much of the population illiterate, songs and music were sure fire ways to get your message across to a diverse audience. 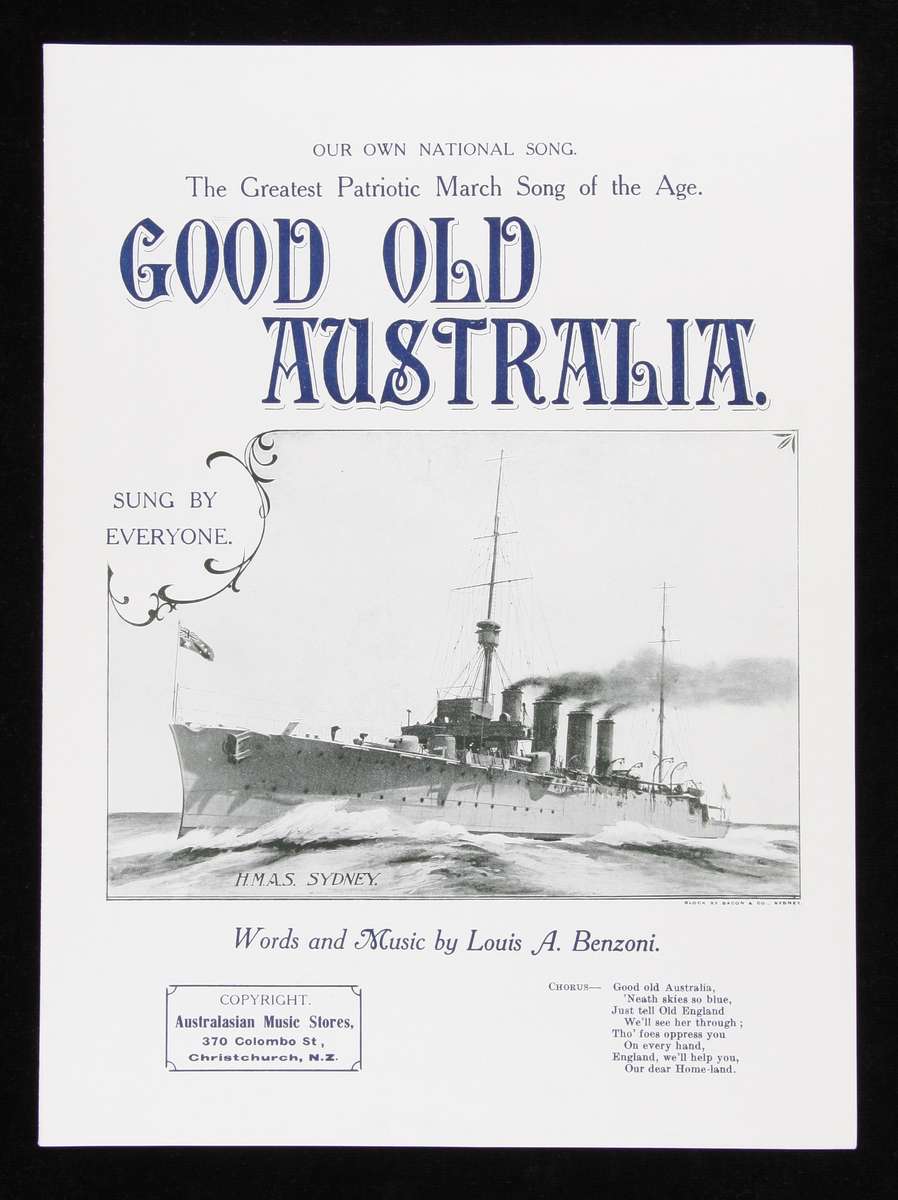 What listener could avoid being stirred by a song to be ‘sung by everyone’ – supporting the Navy with all voices. ANMM Collection 00018490.

Music was also written to commemorate an occasion, committing an event to the public’s memory in a cohesive way. The visit of royalty, foreign fleets and even natural disasters were memorialised by songs in ways that could convey not only the event itself but also the emotion associated with it. Pride, vigour, despair or strength were all embodied in lyrics or melodies absorbed by an undistracted public. 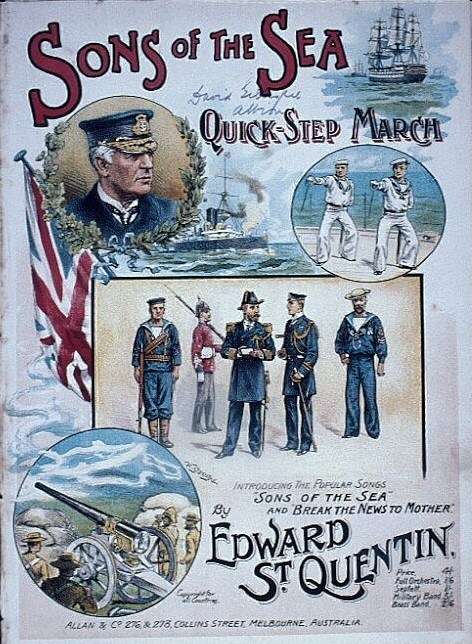 Patriotic songs were widely available, stirring the senses and support of every heart. ANMM Collection 00028927.

All this might sound quaint and transparent now, but there is still a place for rousing nautical themed songs. In September 1975, well into the era of records, radio and television, a surprising event occurred in the UK. The top two songs in the top 40 were inspired by ships. Number one was ‘Sailing’ by Rod Stewart and number two was ‘The Last Farewell’ by Roger Whittaker. Quite the upset in the heady days of disco.

To my mind, Roger Whittaker was completely robbed of the top spot. Nothing against Rod Stewart but ‘The Last Farewell’ surely deserves in place in the echelons of the greatest maritime songs ever written? It was even covered by Elvis! Although rumour has it the lyrics were written on bus whilst stuck in traffic, I sense only naval battles and quiet sadness when I hear the opening sounds of the horns.  It is hard to keep a dry eye with verses such as:

Although rumour has it the lyrics were written on the bus whilst stuck in traffic, I sense only naval battles and quiet sadness when I hear the opening sounds of the horns.  It is hard to keep a dry eye with verses such as:

I’ve heard there’s a wicked war a-blazing
And the taste of war I know so very well
Even now I see the foreign flag a-raising
Their guns on fire as we sail into hell
I have no fear of death, it brings no sorrow
But how bitter will be this last farewell
For you are beautiful,  and I have loved you dearly
More dearly than the spoken word can tell.

So, long live maritime songs. With their rousing music emulating the waves of the open ocean, their dramatic lyrics of a life many of us will never know, these songs stir the heart and wet the eye every time.