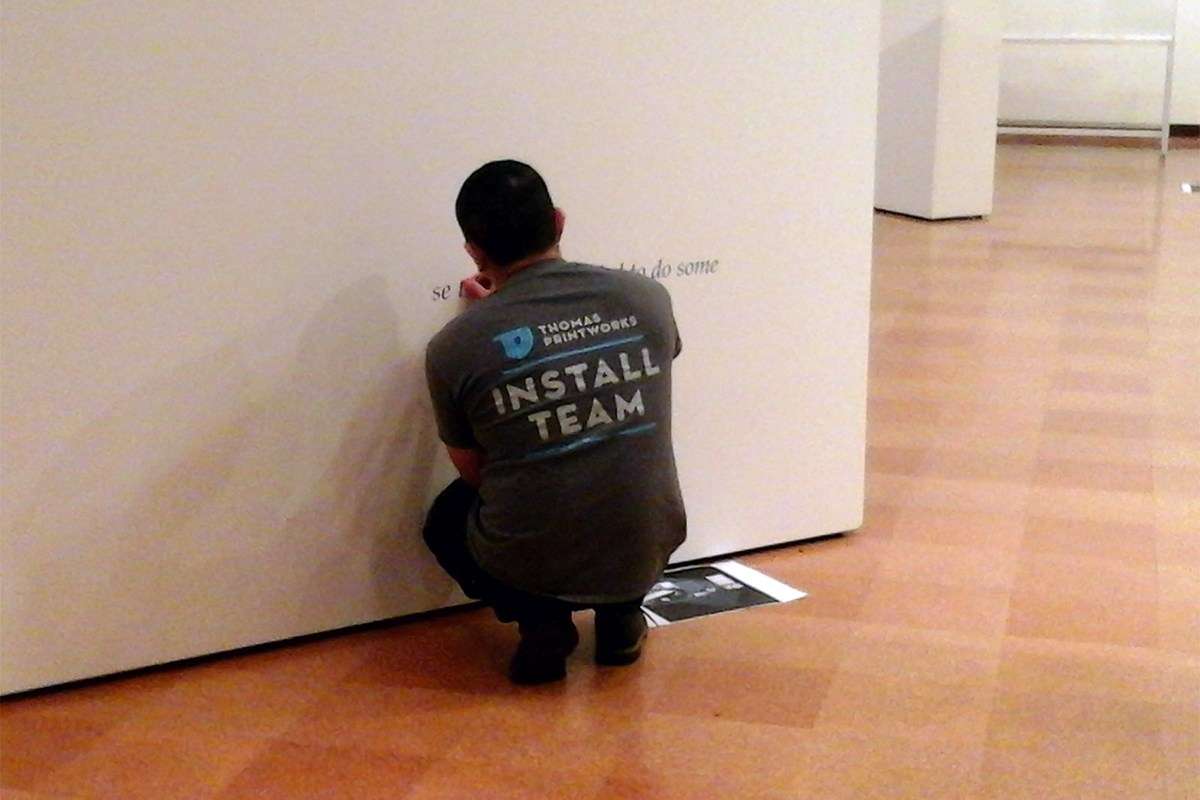 While it pours outside, six of us – three Thomas Printworks installers, Danielle Wilson (Curator at the Julia Ideson Building, Houston Public Library ), Nana Booker (Honorary Australian Consul Emeritus) and I (intrepid Curator) – spend over an hour painstakingly peeling off vinyl lettering from the previous exhibition. To the tune of the Bee Gees’ Stayin’ Alive, we peel and peel and peel, preparing the walls for their new graphics.

The exhibition we are installing has been three years in the making. Guardians of Sunda Strait – the World War II loss of HMAS Perth and USS Houston relates the story of the Battle of Sunda Strait, when our two gallant ships fought to the death against an overwhelming force of Japanese warships off the north-west coast of Java in the then Dutch East Indies (now Indonesia).

This coming 1 March marks the 75th anniversary of the battle, when more than a thousand Australian and American lives were lost and the survivors taken as prisoners of war. Bringing together material from Australian and American institutions, the exhibition will take just over a week to install in Houston’s beautiful Julia Ideson Building. 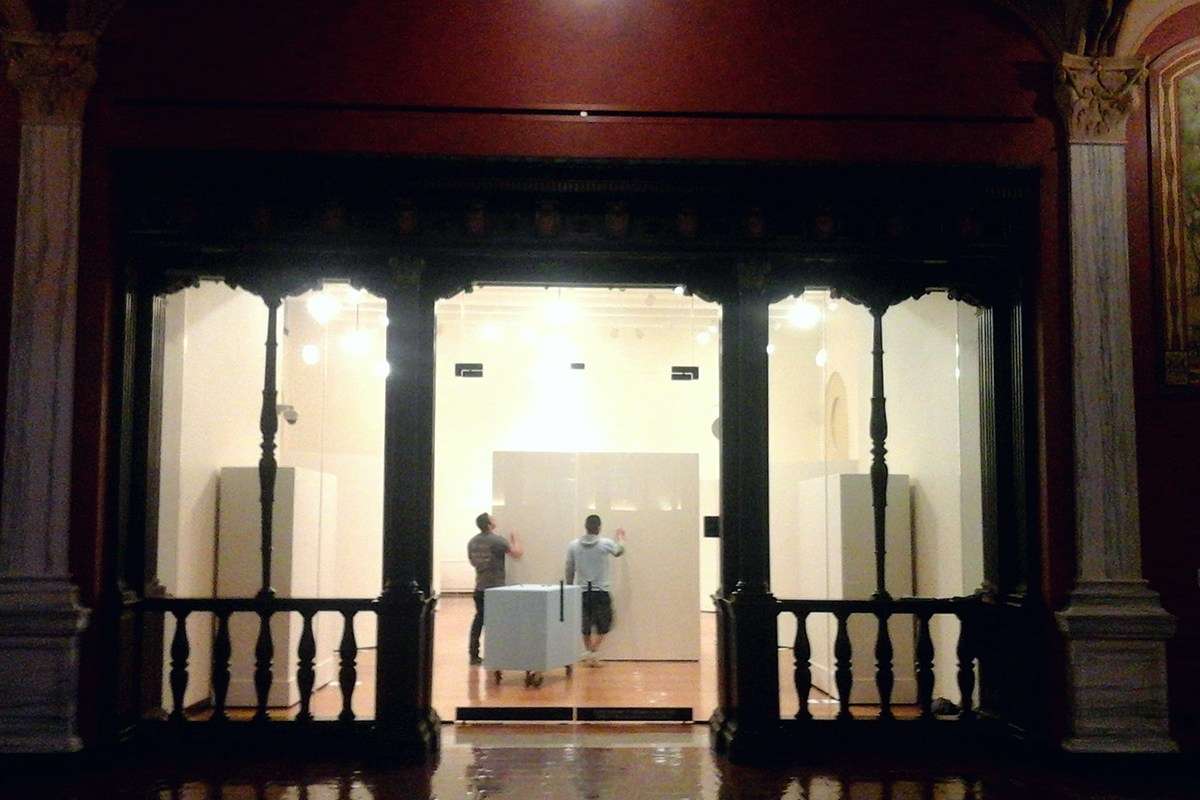 The entrance to the gallery where our exhibition will be shown until 30 June . Image: Lindsey Shaw / ANMM.

Today we started with the graphic elements, stunningly designed by Virginia Buckingham. Stay tuned for further reports as the exhibition continues to take shape. And meet just some of the many people who help bring a concept to life. 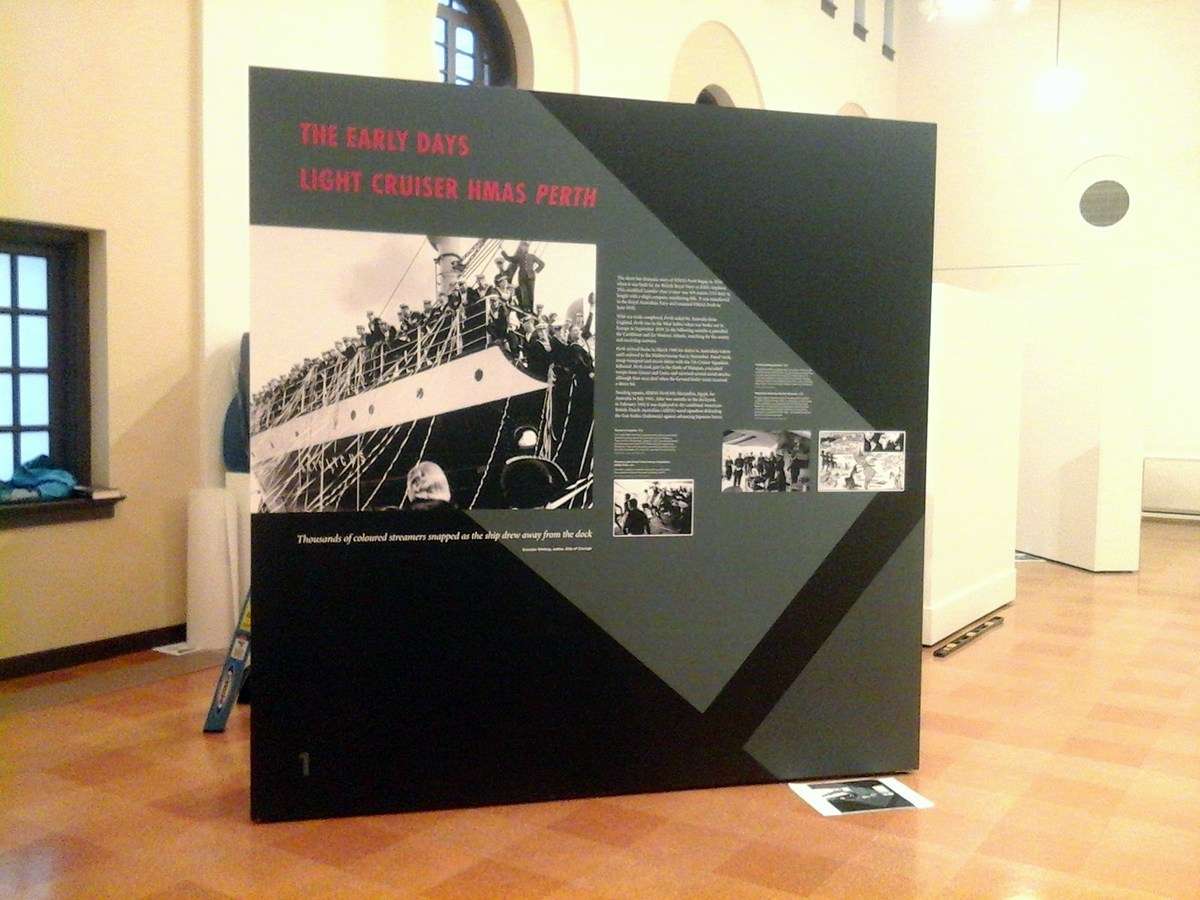 The crates of objects and installation gear have arrived!  They spent the past three days acclimatising to the Houston conditions – which is standard museum practice. With the assistance of Mark and Gray from Ty Art, the installation has been smooth and without issue. The design drawings by Carola Salazar are clear and easy to understand and that has made my job as installation manager that much easier. 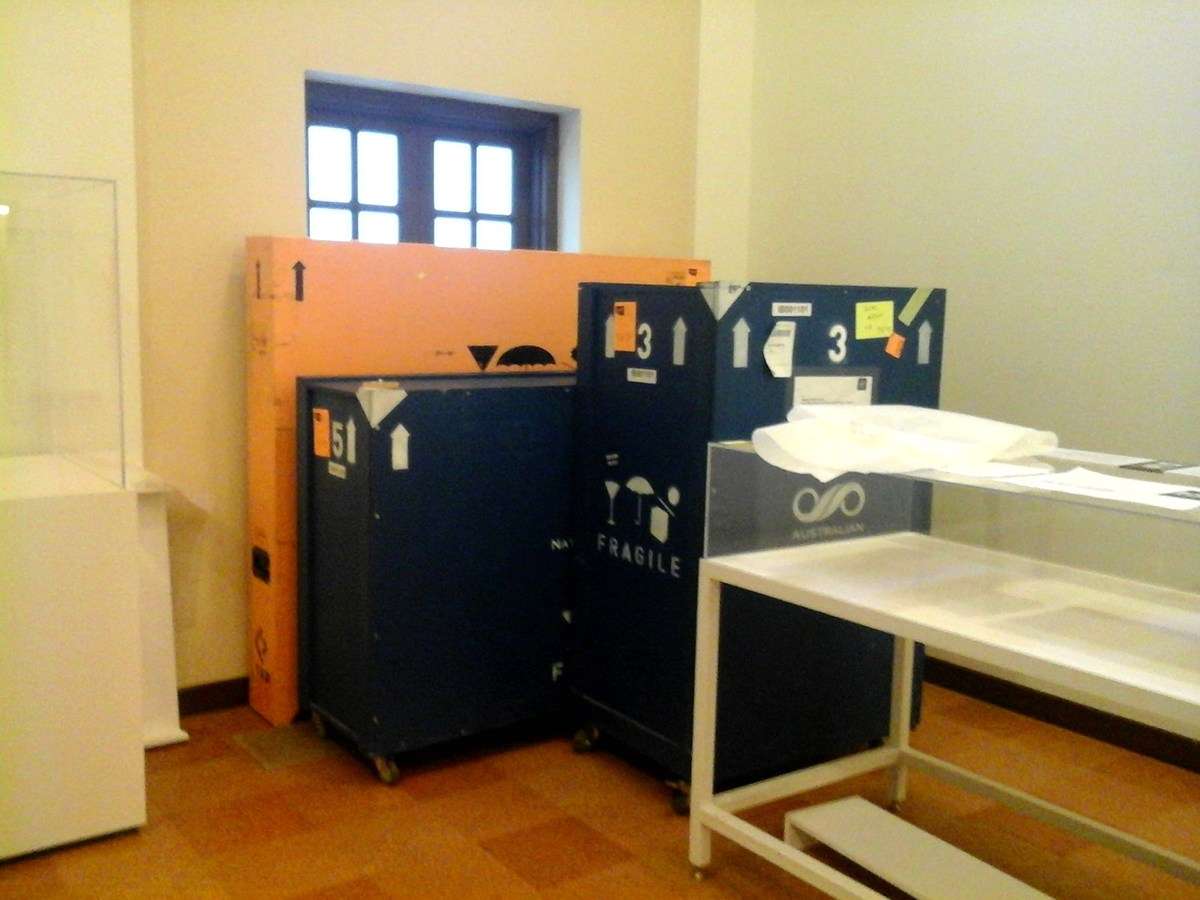 The three crates of objects from Australia waiting in the gallery. Image: Lindsey Shaw / ANMM. 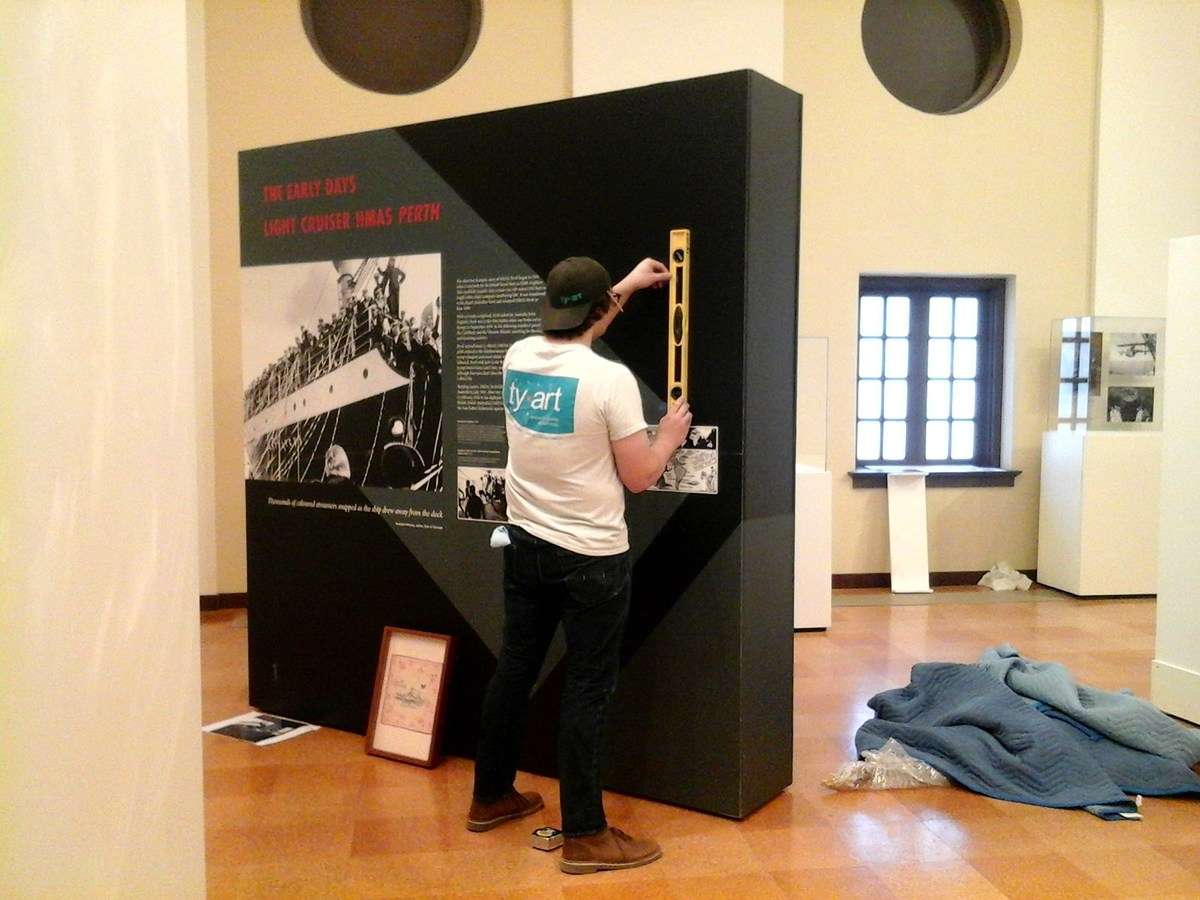 Measuring and marking the location for the 1939 chiffon handkerchief produced for the commissioning of HMAS Perth into the Royal Australian Navy. The handkerchief has been lent by the Australian War Memorial. Image: Lindsey Shaw / ANMM.

Everything is fitting into place nicely and our progress is steady and measured – we don’t want any accidents or dropped objects! Quite a few staff members from the Special Collections area of the Library have dropped by and are all keen to see the finished product. Half a dozen general visitors have knocked on the door to ask what we’re doing and when we’ll be finished. And the security guards have taken a great interest in the show and can’t wait to let people in. 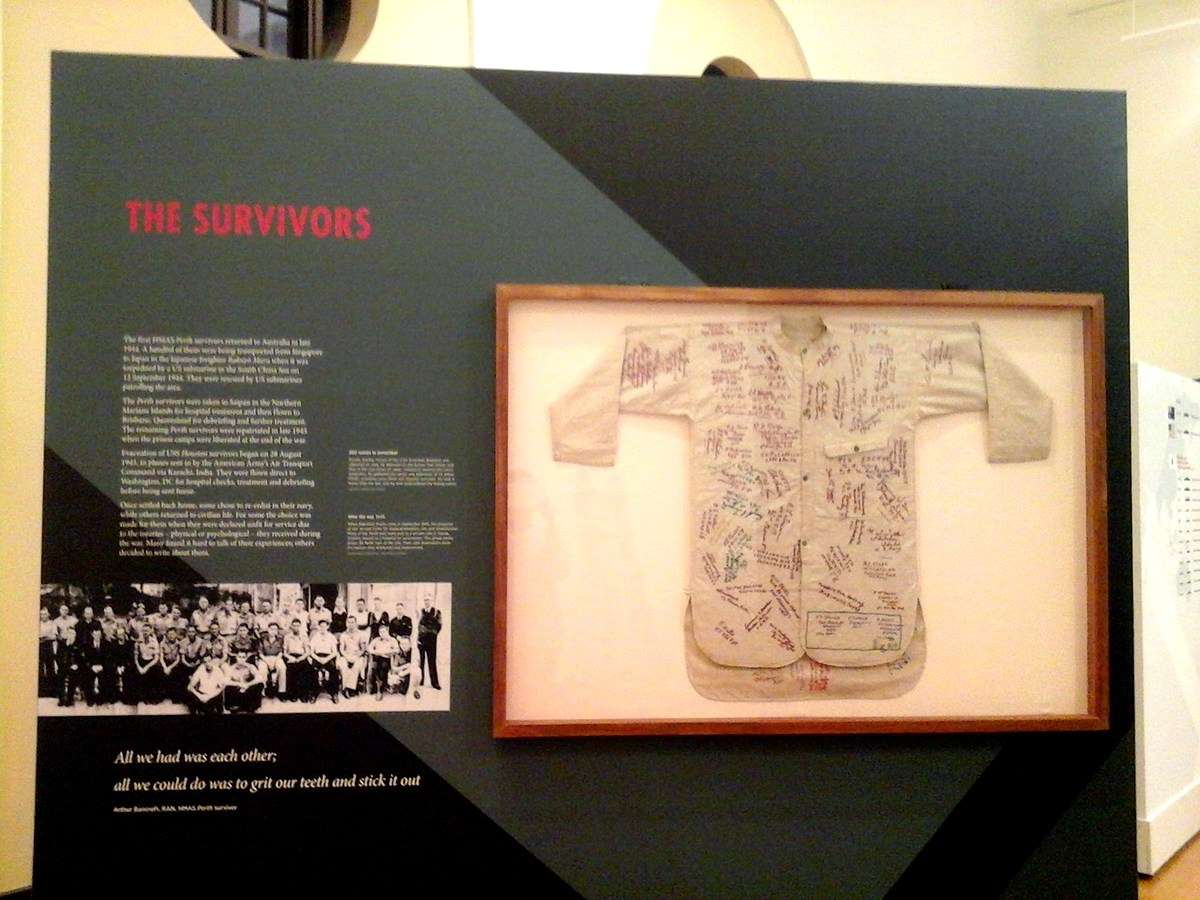 This panel examines the survivors returning home after the war. The framed calico undershirt has some 200 POW signatures and addresses. It is on loan from the Australian War Memorial. Image: Lindsey Shaw / ANMM. 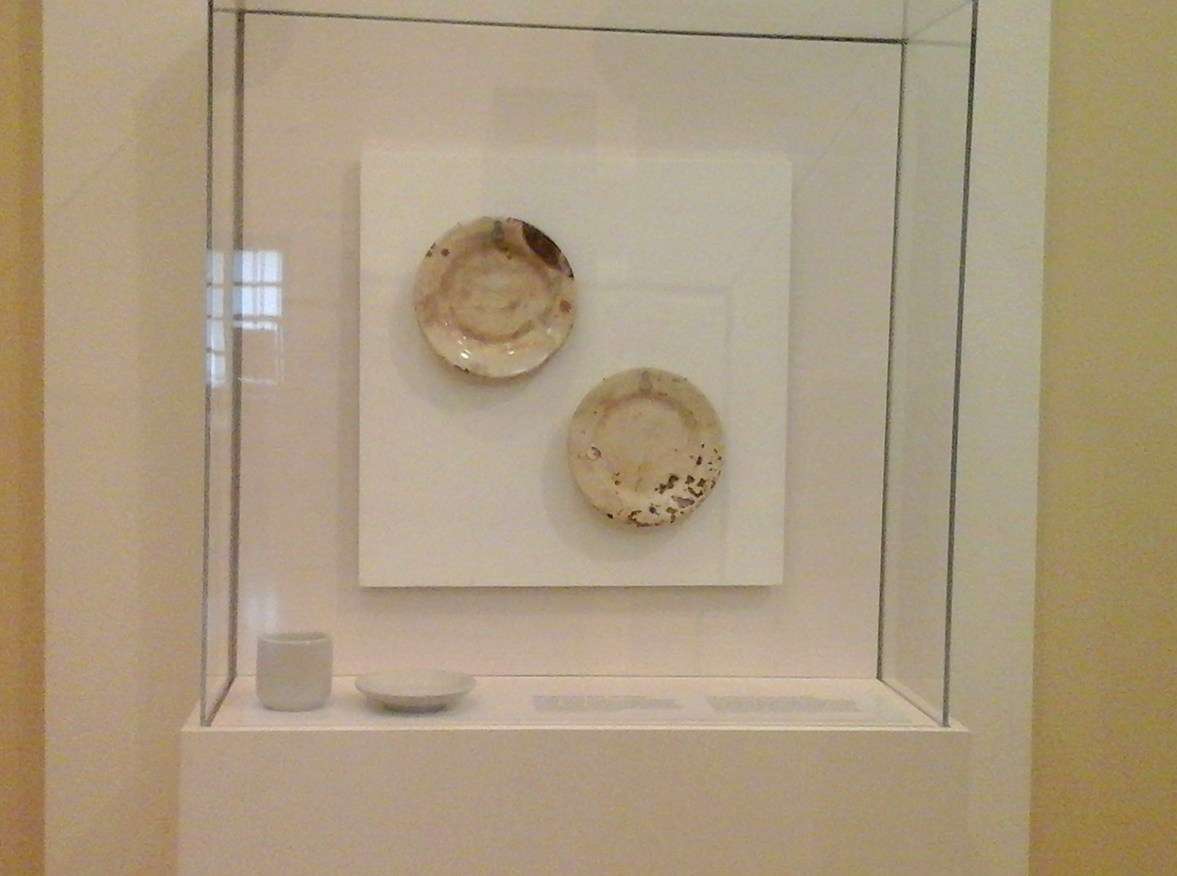 The media are starting to get interested and I finished an interview with The Scuttlebutt newspaper which goes to 15,000 Veterans in the Houston area. Local visitor websites are advertising the exhibition so I’m confident we’ll have a good visitation rate over the period of the exhibition. 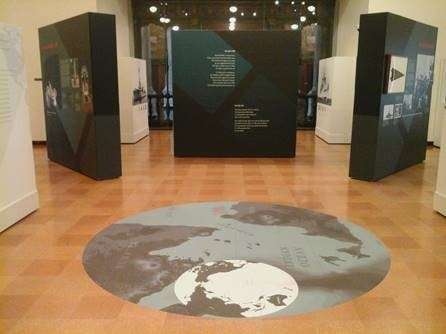 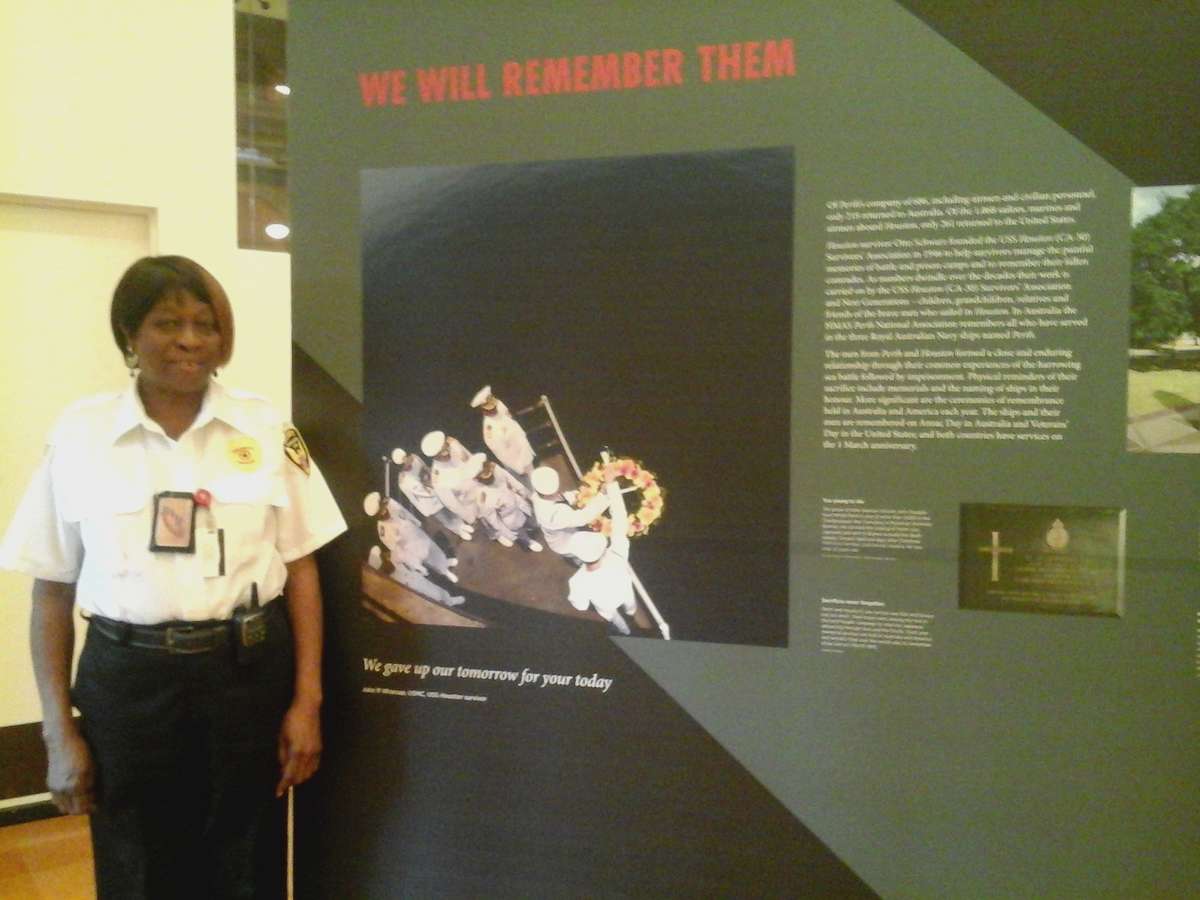