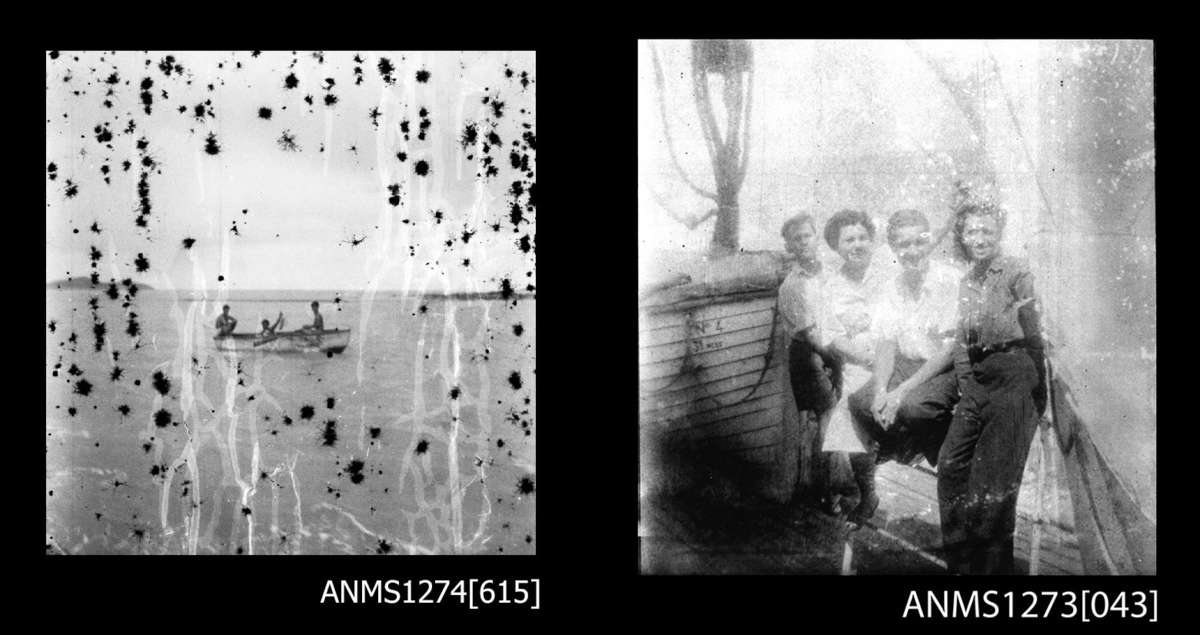 It’s in the nature of all materials to degrade and break down, some faster than others. Even with our conservation, preservation and archiving techniques designed to slow that degradation, objects from our collection need a bit of extra help to survive. While digitising the National Maritime Archive last year, I came across a surprising discovery: a collection of photographic negatives that were degrading while in our archive storage.

Our Paper Object Store is climate controlled at a constant temperature of 23°C with relative humidity at 50%. And yet, even these ideal conditions had not stopped these objects from developing an odour and a damp appearance. 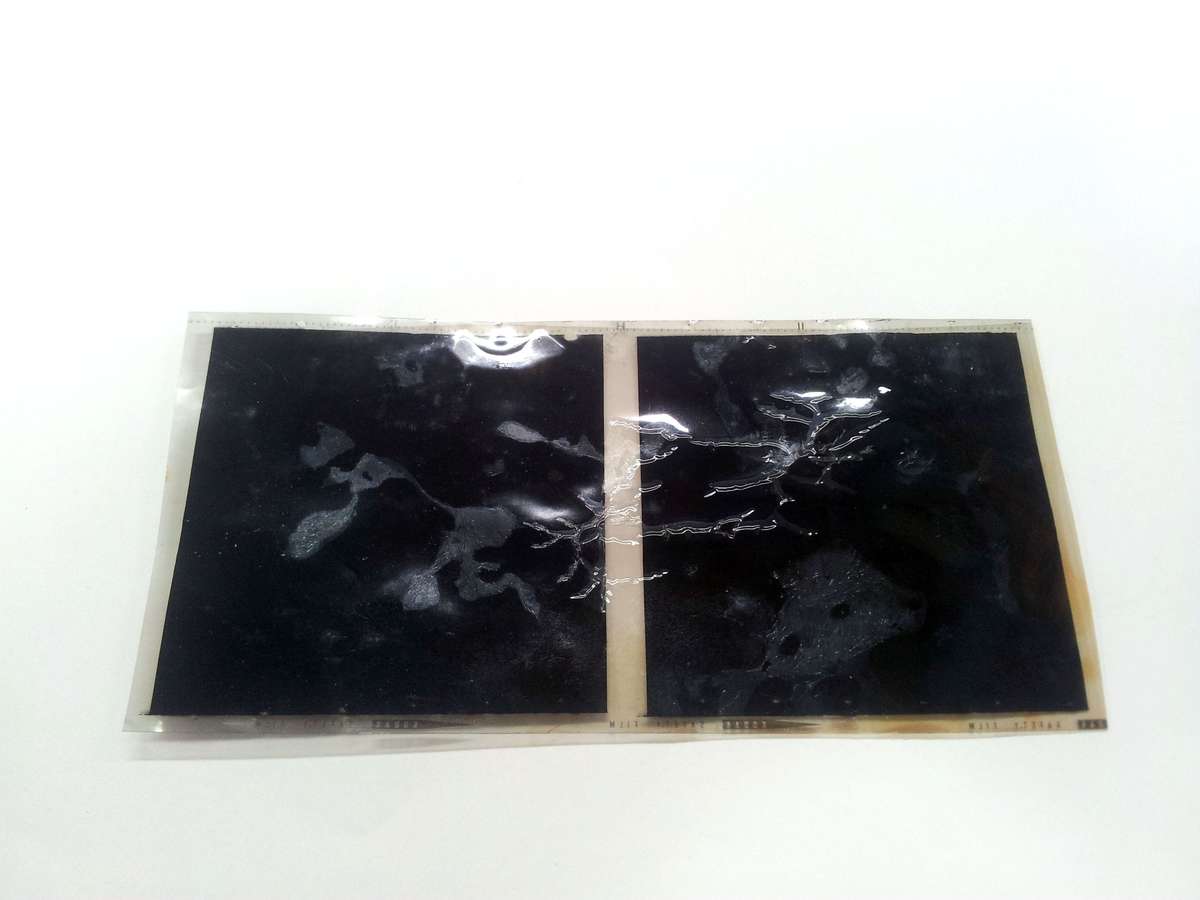 An example of degrading film with farrowing and discolouration. Image: Kate Pentecost / ANMM. 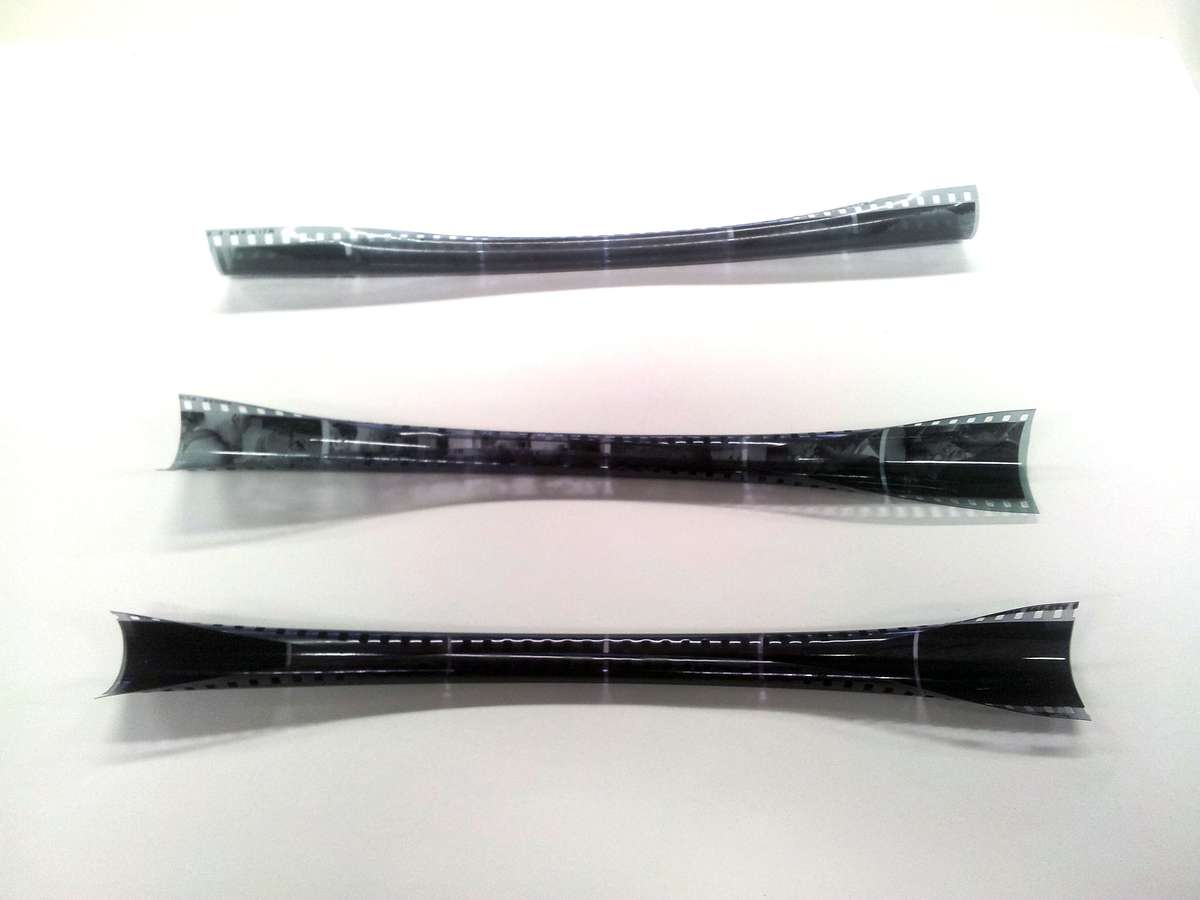 The negatives came from the Denis George Collection. Denis George was a post-World War II Greek migrant who devised a new technique to artificially seed pearls, resulting in establishing a pearl cultivation industry. He adapted dental instruments to seed pearl making molluscs. These instruments and the operations of his Papua New Guinea pearl farm were documented on the affected negatives. 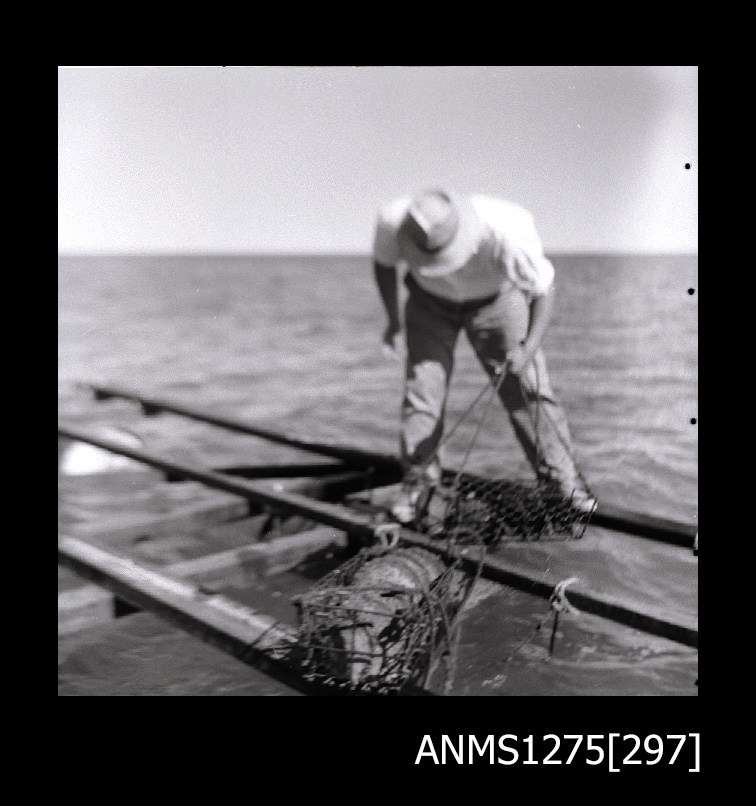 After some investigation with our Senior Paper conservator, Caroline Whitley, it was determined that the negatives were degrading in a process called Vinegar Syndrome. The process of vinegar syndrome is inherent to the cellulose acetate base of the film stock. Exposure of acetate negatives to heat, moisture and/or acids enables and speeds up this process.

Acetic acid is released from the film base acetate molecules, causing the vinegar like smell. As the process continues the negatives experience shrinkage, curling and brittleness. Channels called furrows, develop on the negative and crystalline deposits of the acid appear on the emulsion. Pink or blue colour casts bleed through on the coloured film stock as the gelatin layer releases its dyes.

Once the vinegar syndrome has begun it cannot be stopped or reversed. It can only be slowed and managed. 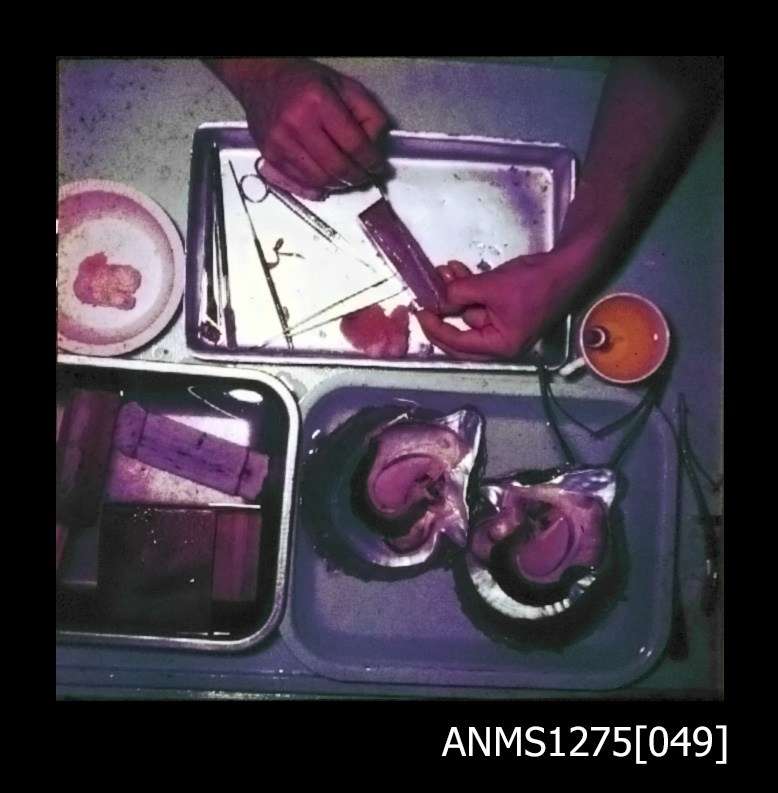 Colour casts from the release of the dyes in the film stock. Image: © Estate of Denis George / ANMM Collection ANMS1275[049]. 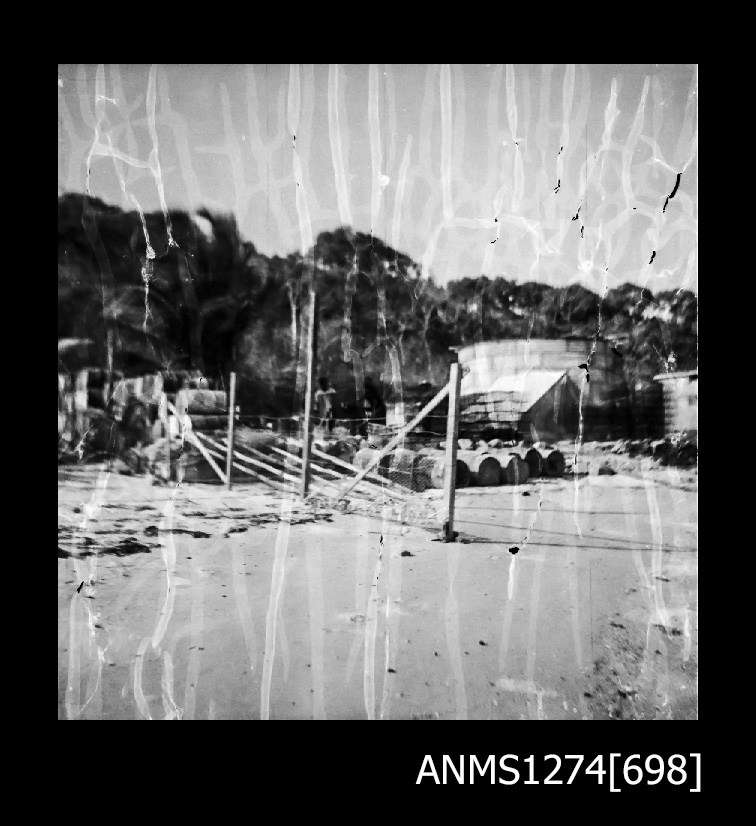 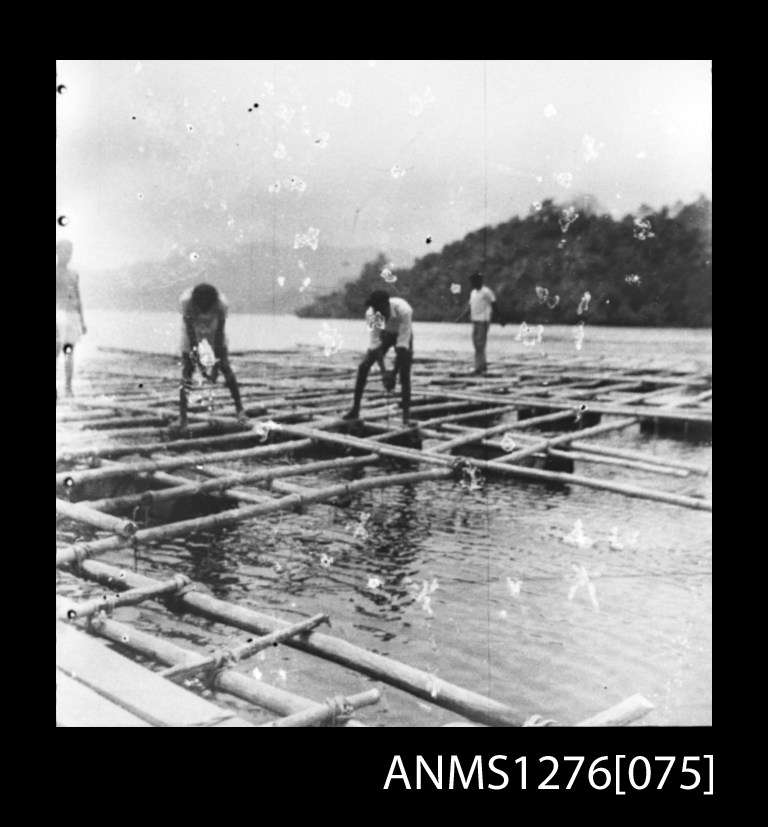 Crystalline deposits of acid on the surface of the negative. Image: © Estate of Denis George / AMNN Collection ANMS1276[075]. 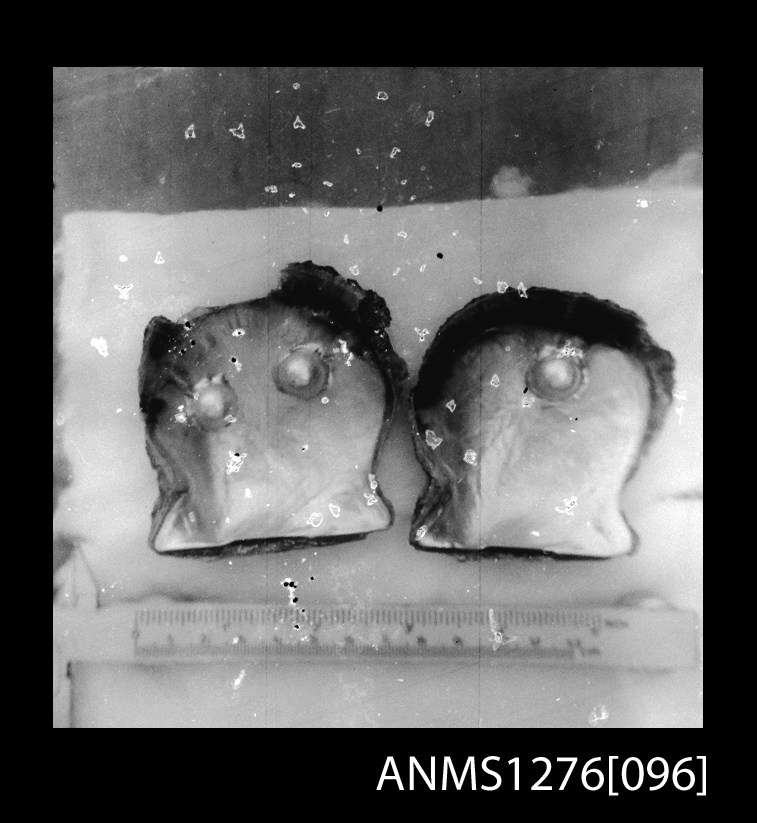 Denis George also pioneered the culture of pearls from Pteria penguin, a bivalve known as butterfly shell, which was not then a recognised pearl shell. Image: © Estate of Denis George / ANMM Collection ANMS1276[096].

The first step is to create a digital record of the negative to preserve the information in the picture before more of it is lost through the progression of the vinegar syndrome. Creating a digital copy of the negative also means that the original doesn’t need to be handled as much, minimising the further damage to the negative.

The scanned TIFF images are then adjusted in Photoshop for contrast, brightness and colour. Highly compressed JPEGS are produced for use in the collection management system and shared through our online collection.

The negatives are currently in the Conservation lab, undergoing cleaning and conservation. Shortly, they will be housed individually in non-acidic envelopes before being placed in cold storage for long term preservation.

Want to see more of Denis George’s photographs exploring his efforts to modernise pearl culturing in Australia? Why not explore our online collection.

View all posts by Kate Pentecost→
Posted in: Conservation , From the collection
↑