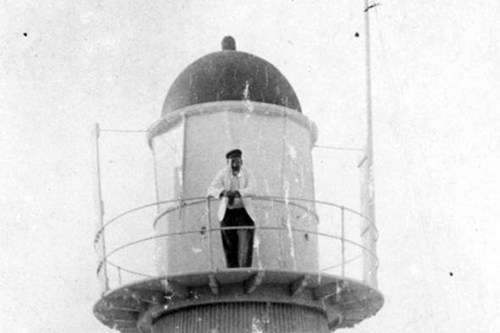 The life of a lighthouse keeper is often either romanticised or seen as a desolate life for those who prefer the solitary confines of the role, away from the social rigours of mainland life.

In reality, the life was a mixture of both and so much more. In our collection is an extraordinary log book kept by the lighthouse keeper William Norgate from November 1893 to November 1929. The log is dilapidated and fragile but reveals a humble yet extraordinary life.

William was a lighthouse keeper on Goods Island (or Goode Island) and Booby Island in Torres Strait for nearly 40 years. He seems to have been a methodical man by nature and meticulously recorded the daily running of the islands. He also transcribed many of the letters he both sent and received and it is through these letters that much of the life of William, his wife Lizzie and their family is seen. 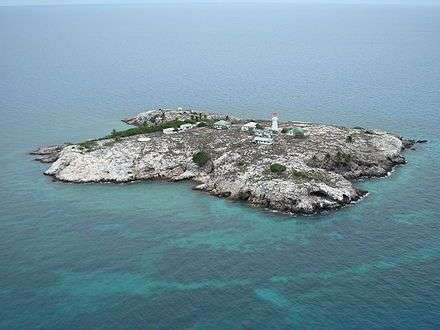 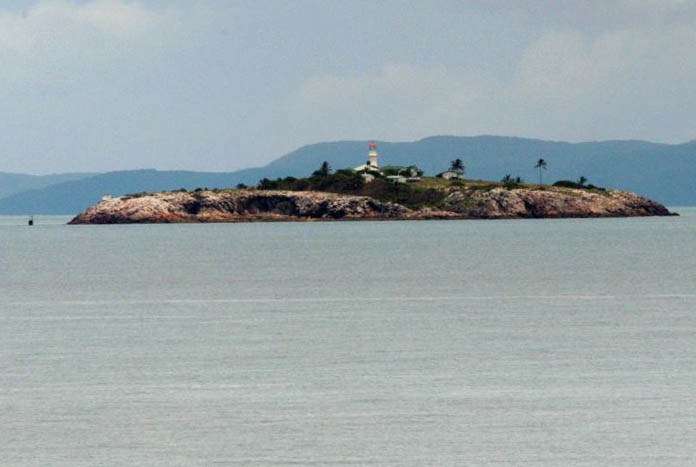 William Norgate began his life as a keeper in 1893, after spending some years in the coastal pilot service. However, once he was married he felt it would a better life for himself and Lizzie in the Lighthouse Service. The position offered a house and regular income paid by the government and was seen by many as an opportunity to raise their family in relative security. Despite the hardships of life on a remote outpost, men with a stable family were preferred as lighthouse keepers to single men.

Not surprisingly, it seems that William’s wife Lizzie initially struggled to adjust to island life. She seems to have missed the basics, such as three cups of tea a day rather than the rations which now faced her. But Lizzie pushed through and as William wrote in 1894, ‘She is not very frightened of me and doesn’t cry to go home to her mammy yet’. As the years passed, frequently William mentions Lizzie’s frail health that seemingly plagued her all her life. 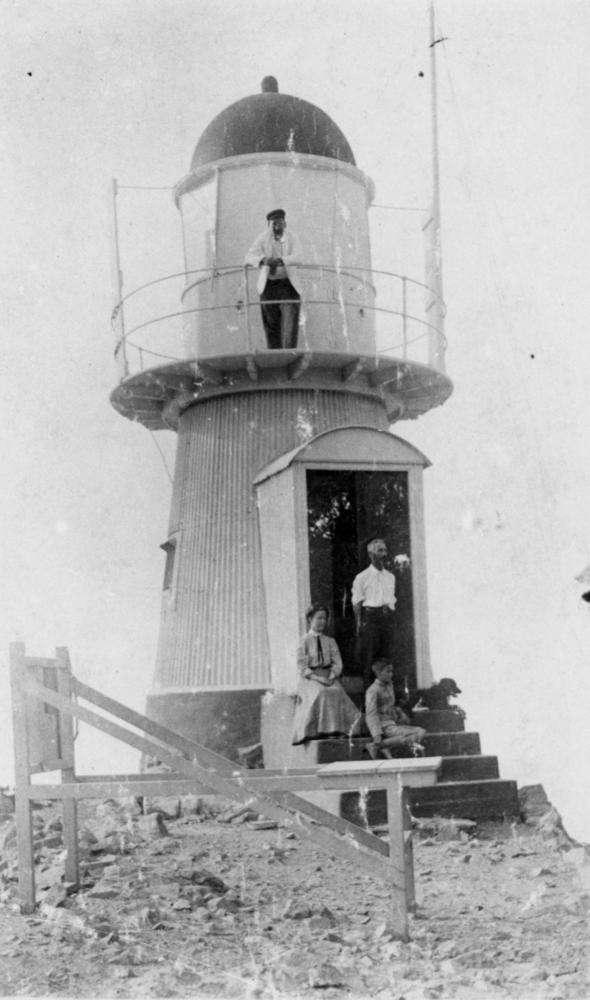 Goods Island lighthouse c 1909. Although officially unidentified, this family group is likely the Norgates as they were still the keepers on Goods Island until January 1910. Image: State Library of Queensland Collection.

William quickly settled into lighthouse life. During his first year, he described his life on the island to a friend via a letter as ‘having to do everything that wants doing ourselves. It is surprising what I have had to put my hand to, I had a lot to learn, but it is the variety of work that keeps it from getting monotonous. It is half-sailor, half-bushman with all sorts of trades mixed with it’.

Daily entries outline the endless tasks William faced: cleaning, repairing, painting, building and of course, above all, keeping the light maintained and burning at night. In such harsh coastal conditions buildings and equipment weathered quickly. Everything seems to have needed constant tending. Although keepers were on call 24 hours a day, they were actually only paid for eight working hours per day: four during the daylight hours and another four at night, which meant ‘a man has plenty of time for himself’. 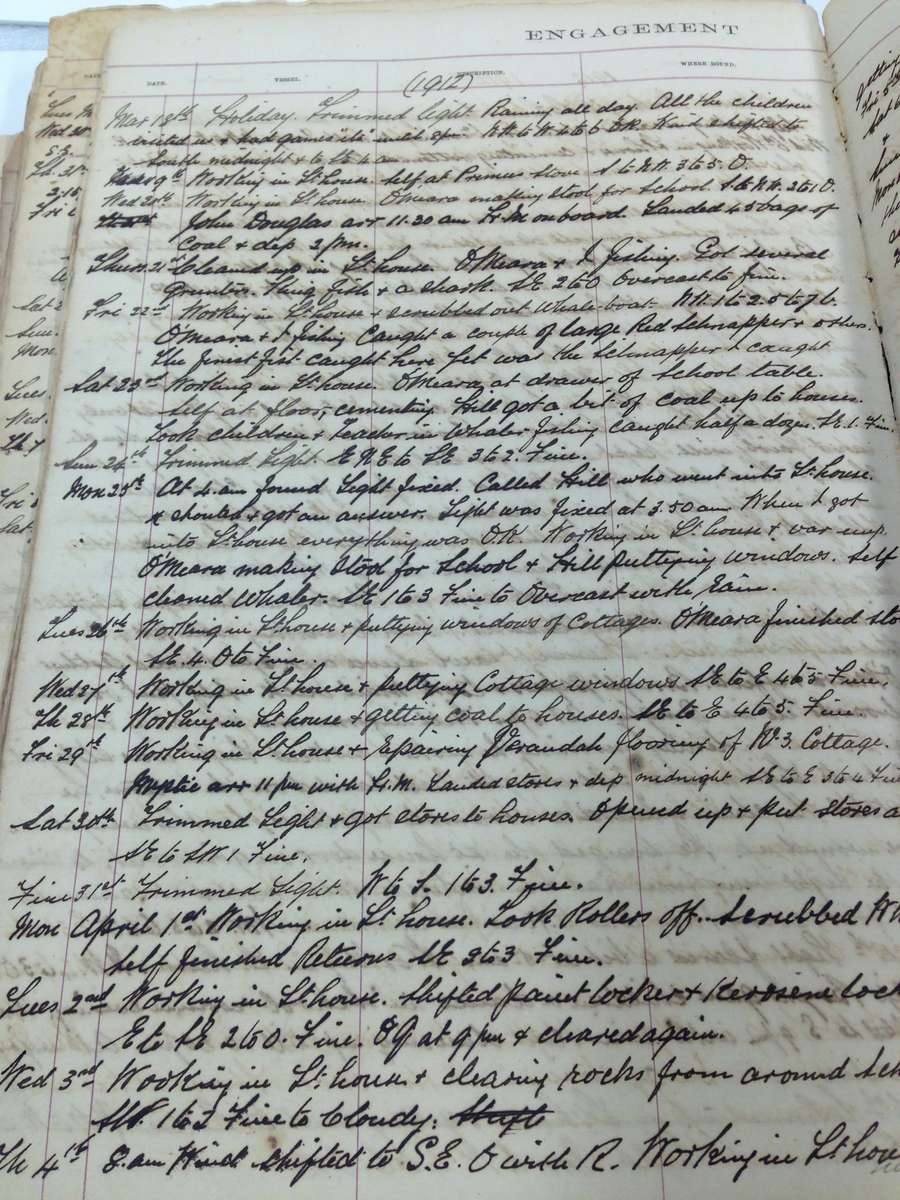 It was a (very) small neighbourhood

Once a month supplies and the mail were delivered by a passing steamer and William’s log records regular visits to the mainland, where the family enjoyed local concerts and visits to friends.

On the islands there was another family in residence and it is interesting to think about the dynamics of this arrangement. The island might have seemed less lonely and more communal with another family in the same situation, but for William, the close proximity of others presented its own problems:

It is very lonely for Lizzie; for although we live close to one another, she scarcely ever sees or speaks to anyone but myself. Of course there is no fear of quarrelling being like this, but I think she carries it too far. The Boss’ people seem very nice but are much like herself, likes to keep at home. 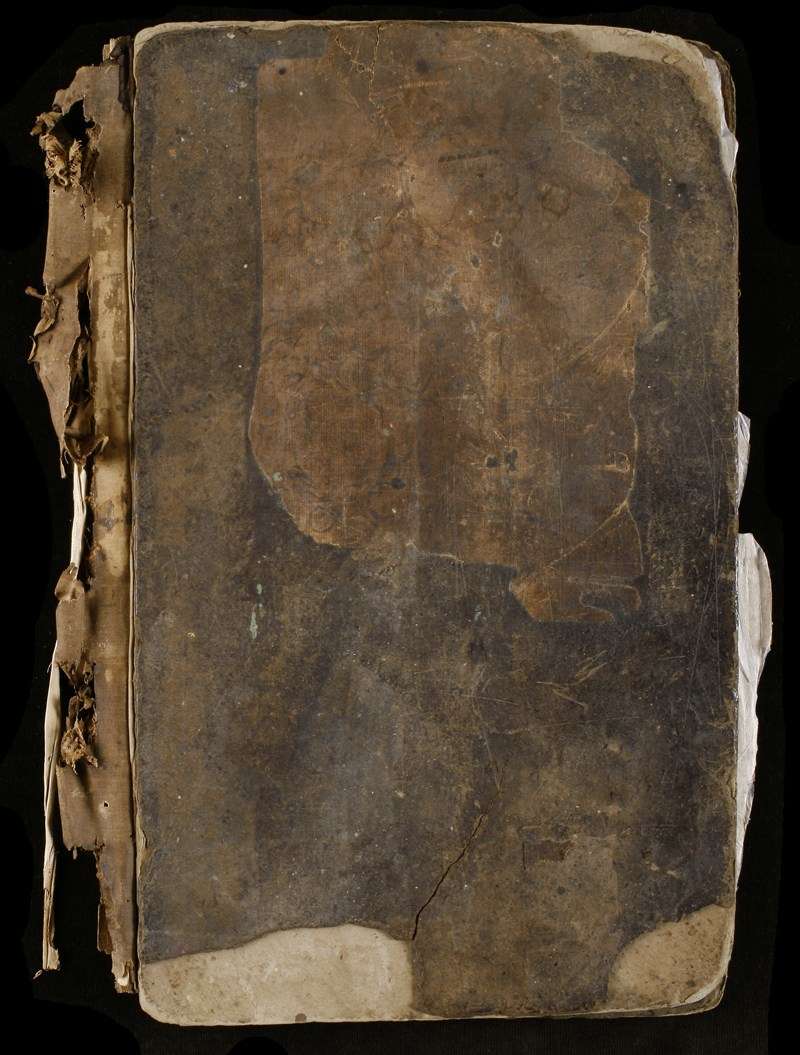 Used daily for nearly 30 years, the log of William Norgate is a testament to his dedication. ANMM Collection 00053717.

According to a recent study of life as a keeper, this self-enforced separation was common among lighthouse families sharing an island:

Everyone noted that ‘you didn’t want to be in each other’s pockets’ and that casual visiting among the lighthouse families was strongly discouraged. The men had to work together every day – a situation either companionable or difficult depending on the personalities. Women rarely visited each other casually, and those who did were sometimes remembered as a burden. Such careful social management meant that usually only dogs and children were noted as the triggers for community disharmony. Despite the generally held rule of ‘keeping to yourselves’ the degree to which meetings occurred differed from station to station. Sometimes people never visited the other houses.1

The Norgates spent more than 40 years as the lighthouse keepers, raising four children and moving to Thursday Island in 1930. On William’s retirement the local paper recognised his contribution to life in the area:

Mr William Norgate of the Lighthouse Service, who has been in charge of the Booby Island lighthouse and formerly in charge of Goods Island, has taken up residence on T.I. having purchased a home in Hastings Street. Mr Norgate has nearly 50 years in the Lighthouse Service of the Queensland coast, and over 40 years on the above named lights and is well known and respected by all residents of Torres Straits. Visitors to Booby Island were always sure of a right hearty welcome from Mr and Mrs Norgate, and we all wish them many happy years of well-earned rest after their faithful service. Mr Norgate has reached retiring age and goes out on a pension. 2

After a lifetime of battling the elements and keeping the lights burning, sadly William died only two years later in 1932, at the age of 67. He did not get to enjoy the feeling of finally sleeping through the night or the luxury of staying indoors in foul weather for very long. But countless ships owe their safe passage through the islands to his diligence and Lizzie was finally settled on the mainland.

Got a craving for more historical tales? Check out our collection online.