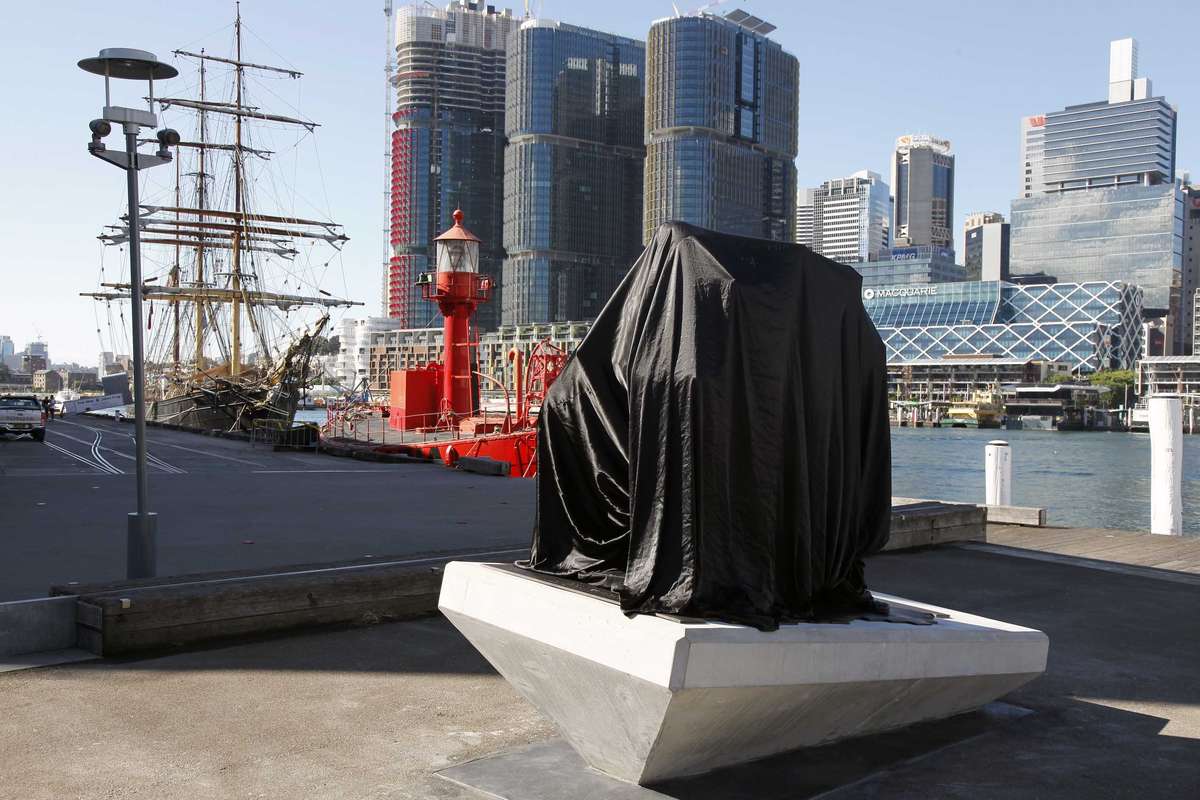 What’s wrapped up under the silk? Image: Andrew Frolows / ANMM.

Last week saw a Christo-like wrapping of silky black satin on the wharf at the Australian National Maritime Museum in Sydney’s Pyrmont. Intriguing and mysterious the form it enveloped was unreadable…

What could be under the silk? Well it’s an amazingly beautiful material, bronze. Used for millennia for public statuary, it is here applied to fuse old and new in an incredibly detailed and exacting process. This has produced a sculpture that explores something of the history of the site as a mercantile and maritime centre.

Pyrmont is loaded with layers of history from pre-colonial times and was much visited by vessels of all sizes, shapes and technologies. In the past 200 years its main traffic was the great sailing ships that criss-crossed the world’s oceans carrying their cargoes, travellers, immigrants, scientists and explorers to and from ports around the world. Sailing these ships was incredibly dangerous work and many ships were lost and people drowned as they succumbed to treacherous seas. There are more than 8,000 wrecks just in Australian waters, and 1,500 of these have been identified. In the age of the sailing ship, shipwreck was not uncommon. 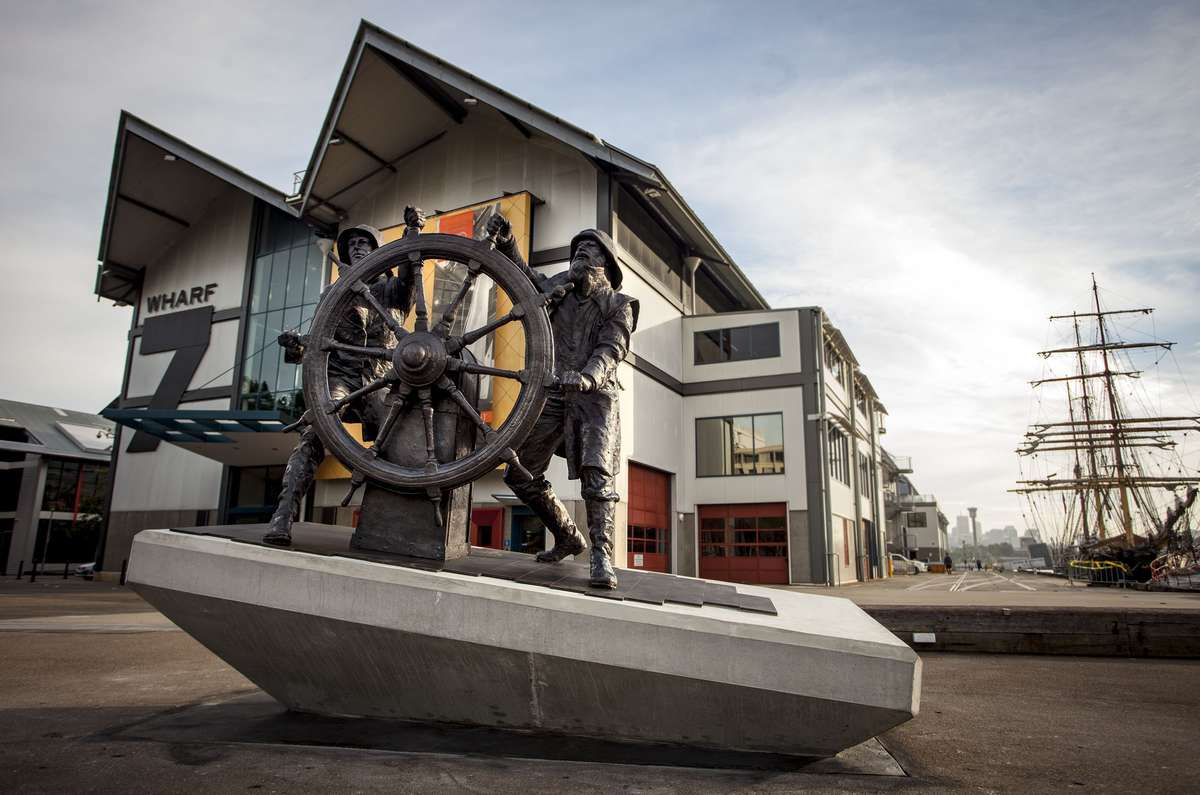 The Windjammer Sailors with the tall-ship James Craig in the background. Image: Andrew Frolows / ANMM.

This new work is dedicated to the spirit of the sailors of the great wind ships, based on a concept by Dennis Adams, an artist who voyaged on the windjammers in the 1930s as they were about to disappear, overtaken by safer, newer technologies and designs. 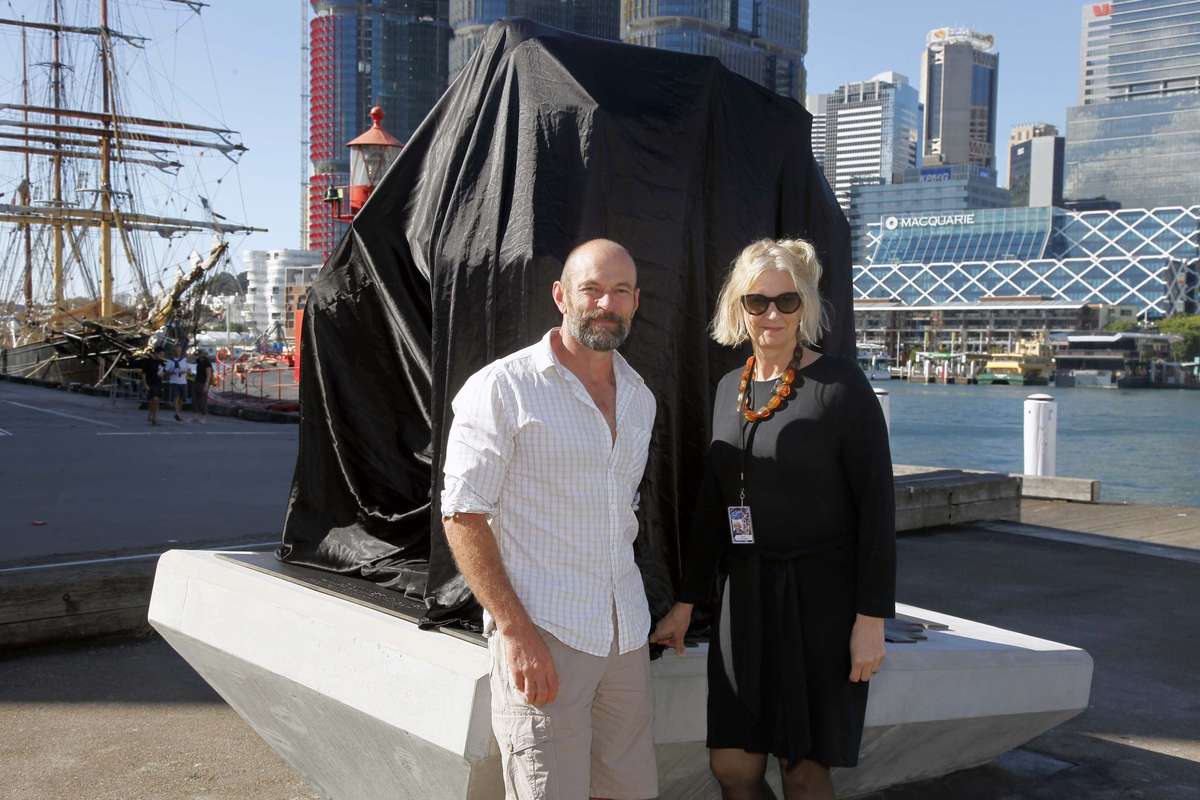 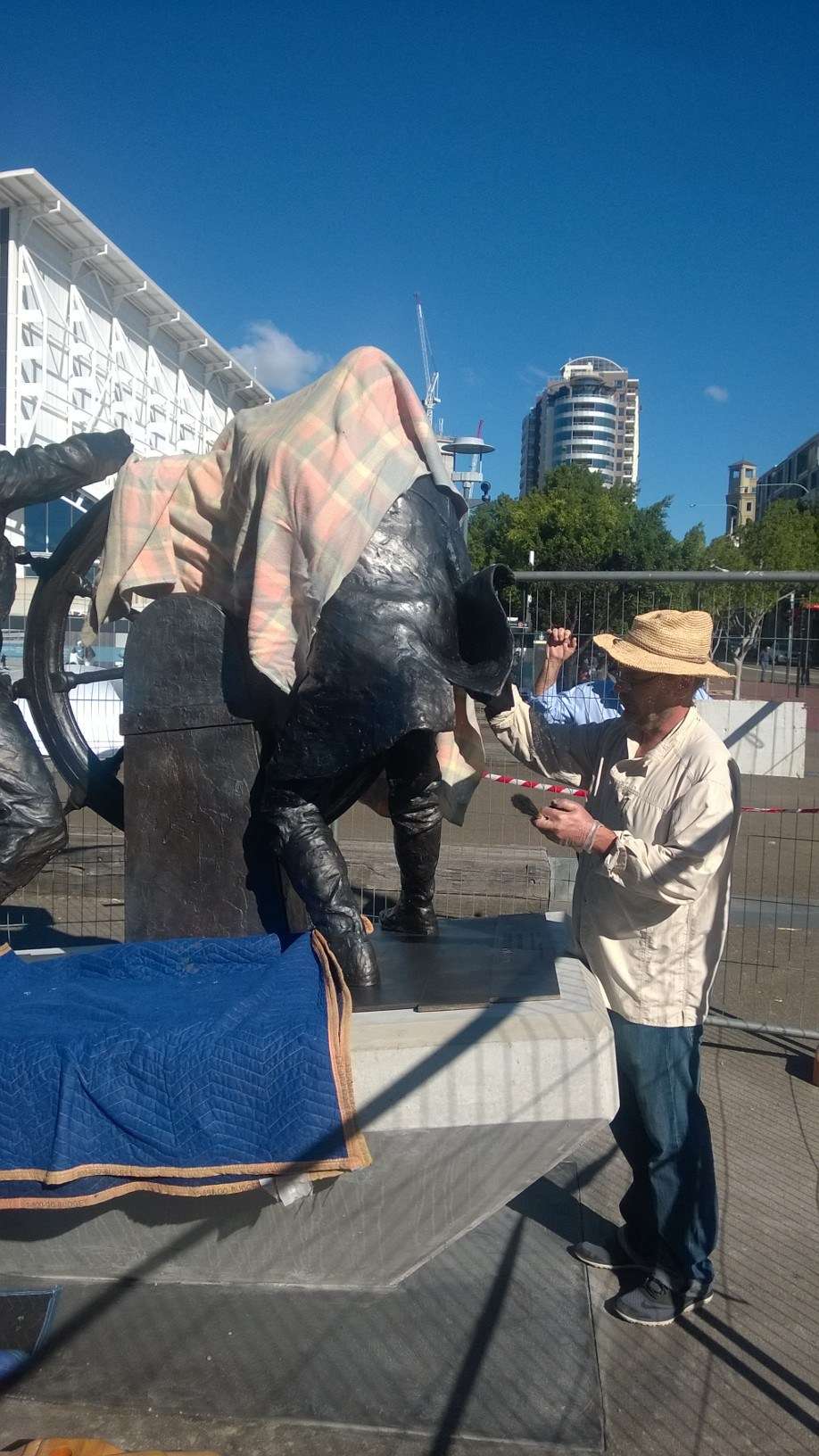 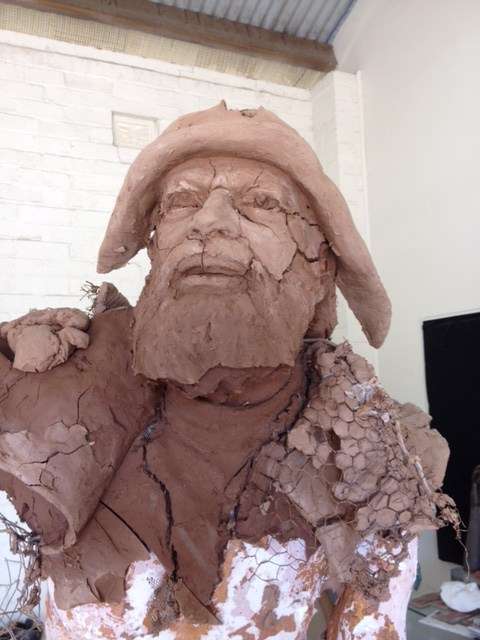 A ghostly face of the past, formed in clay. What was left of the original clay sculpt. Image: ANMM. 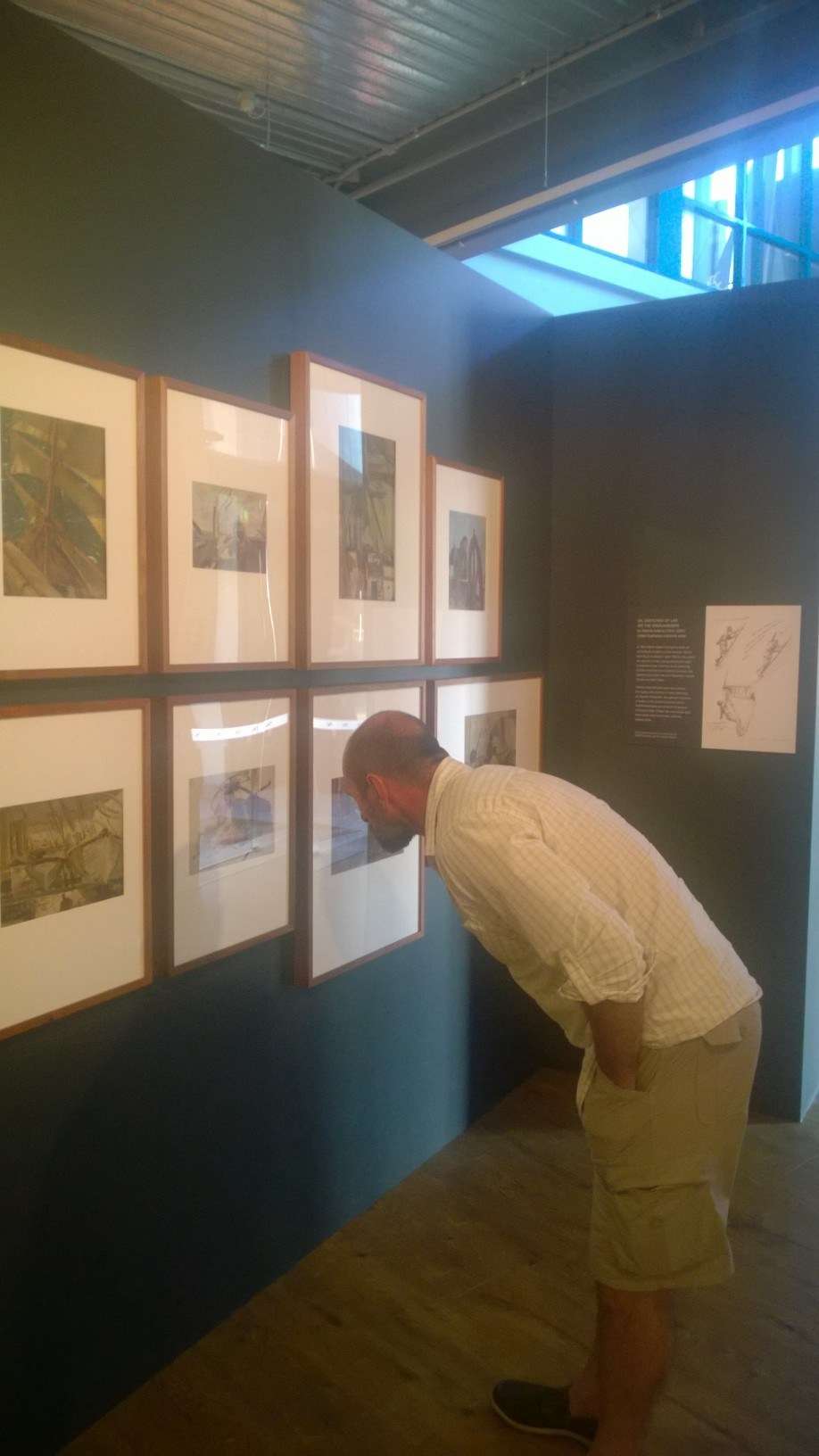 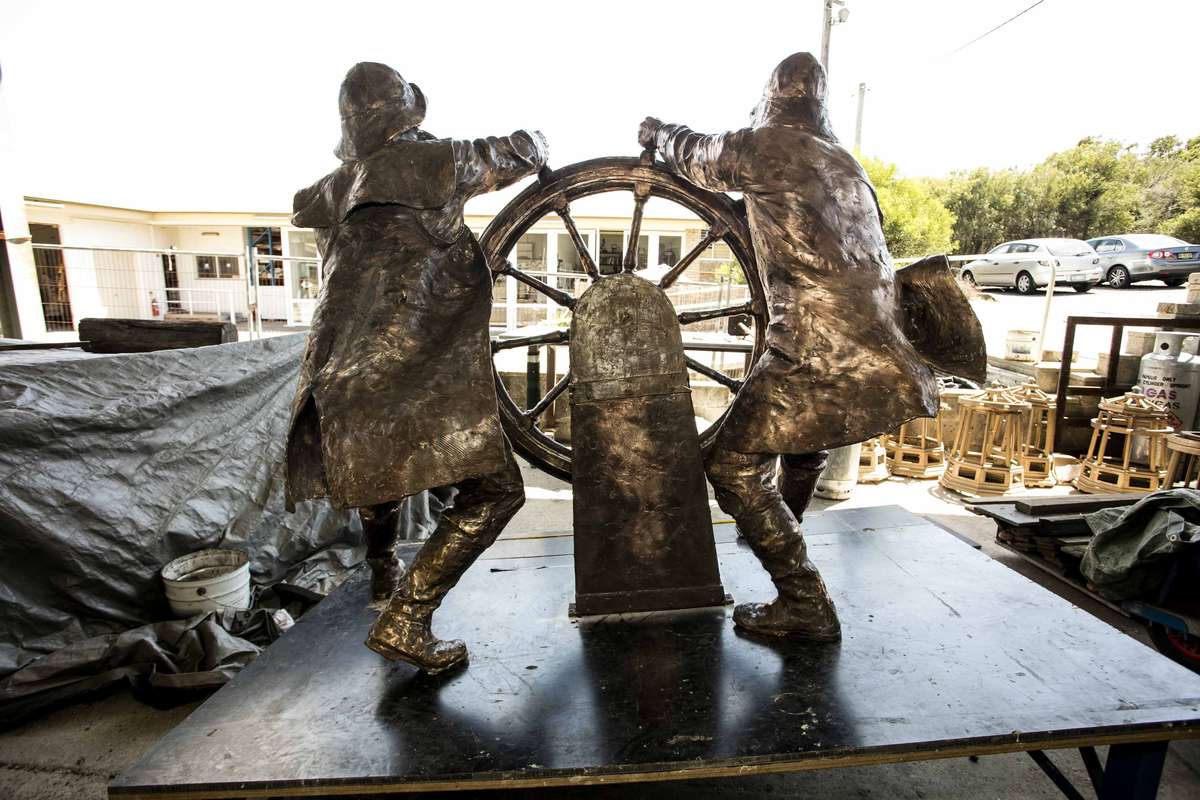 The Windjammer Sailors, ready to battle any storm at their last day at the Australian Bronze Foundry. Image: Andrew Frolows / ANMM.

The concept was reimagined in 2015/16 by artist Brett Garling. The work was produced in Sydney where it was cast and moulded in materials as sensuous as clay, as flexible as silicon, as sensitive as wax, as hard as ceramic and finally as resonant and deeply intoxicating as bronze. It was installed earlier last week and polished and waxed for its unveiling, a generous gift to the Australian National Maritime Museum from Rear-Admiral Andrew Robertson AO, DSC, RAN (Rtd).This Windjammer Sailors is both romantic and adventurous in tone, representing a moment of danger in many a long sea voyage with sailors wrestling with the wheel. Visitors and passers-by will now see those sailors back on the wharf in this exciting figurative sculpture in bronze.

Ever wondered how to make a life sized bronze statue? Yes? Excellent – because you can read more about the story behind the Windjammer Sailors here.

View all posts by Daina Fletcher→
Posted in: From the collection , Arts and Culture
↑