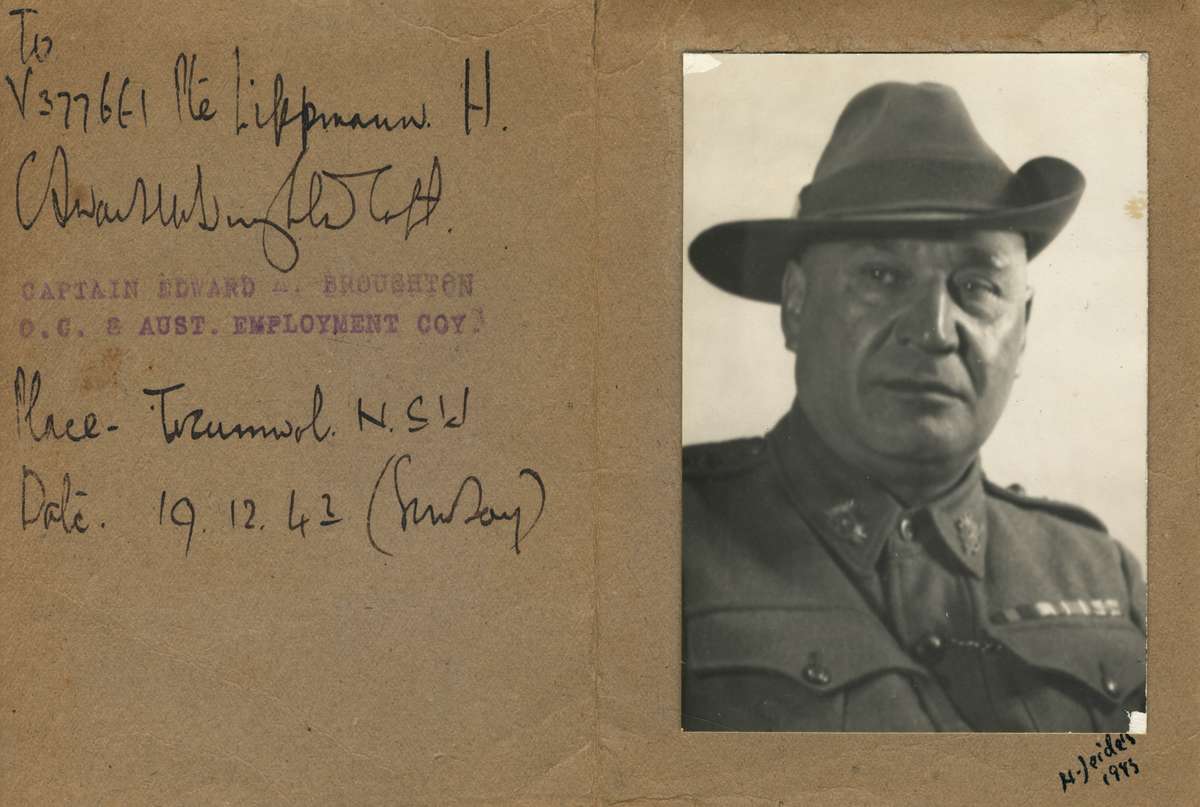 Photograph of Captain ‘Tip’ Broughton addressed to Private Heinz Lippmann, Tocumwal, New South Wales. 19 December, 1943. These were sent to each enlistee at the time of their discharge from the 8th AEC. ANMM Collection ANMS0221[005].

In 1940 at the start of WWII a New Zealander ‘underestimated’ his age by 16 years and enlisted in the AIF in Melbourne.

Captain Edward ‘Tip’ Broughton was already a veteran of two wars. He had served in the Boer War (that time ‘overestimating’ his age in order to be accepted) and had been part of the Maori Battalion at Gallipoli. He later served in France and was mentioned in dispatches for his ‘distinguished and gallant service’. Broughton moved to Australia after the war and settled in Melbourne where he was a bookmaker until the opportunity to serve in the army arose again.

Originally accepted into the Second AIF, Broughton’s youthful ruse was soon up but rather than being dismissed he was transferred and given the command of the 8th Australian Employment Company (AEC). What may have initially seemed a disappointment to the battle hardened Maori, his assignment became an enduring legacy and a life changing experience for the men under his charge.

The 8th AEC was made up of men from HMT Dunera. Jewish refugees from Germany who had been interned in camps at Hay and Tatura and only just been released. While not all ‘aliens’ from HMT Dunera chose to stay in Australia and serve, many did and found themselves in the unit overseen by Captain Broughton. The primary role of the 8th AEC was to load and unload goods from trucks and ships at wharves and store houses.

While perhaps not work suited to many of the artists, academics and businessmen of the unit, these men were happy to finally be able to contribute to the war effort against an enemy who had destroyed everything they had known.

“They wore slouch hats and dressed and drilled like other soldiers (substituting shovels for rifles) but were not allowed on combat duties. They were in effect labourers in uniform. The youngest, barely out of their teens, the oldest had served in the First World War.”

Whilst the job of the 8th AEC was basic, hard manual labour, the unit was diverse mix of men. It was up to Captain Broughton to unify them, their various talents and experiences and help them overcome not just the prejudice they encountered in day to day dealings within Australia but also reconcile their past. As a tattooed Maori, and one of only two “coloured” officers in the Australian army at the time, perhaps Broughton understood better than most the effects of displacement and prejudice.

He took a compassionate and hands on approach to his duty from the start:

“He was a highly intelligent and educated man, and it did not take him long to understand our very complex situation as Jews and refugees transplanted from Europe against our will to a far distant foreign continent. Broughton knew practically everybody’s personal details and family backgrounds. He supported every effort connected with the affairs relating to our status. Our post-war future had never been officially defined. He facilitated every effort for special leave, such as examination times. He promoted every effort for release from army service and to take up a civilian career. He supported the Jewish cause, respecting the orthodox and any special holidays. He took us to “church” on Saturday mornings or rather synagogue parade. He attended private functions and many weddings.” 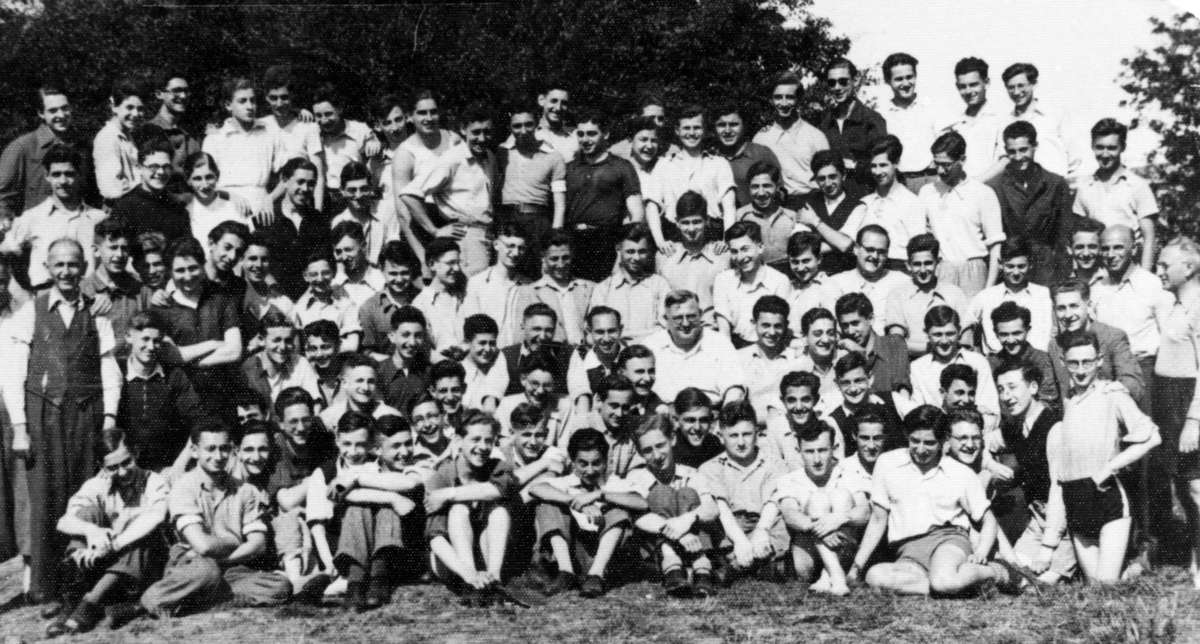 The boys of the ORT school in Berlin immediately prior to their escape to England. Of the 200 boys enrolled, only 100 made it out of Germany the day before the borders were closed. They were sent to Australia where many of them made it into the 8th AET. ANMM Collection ANMS0219[005]. 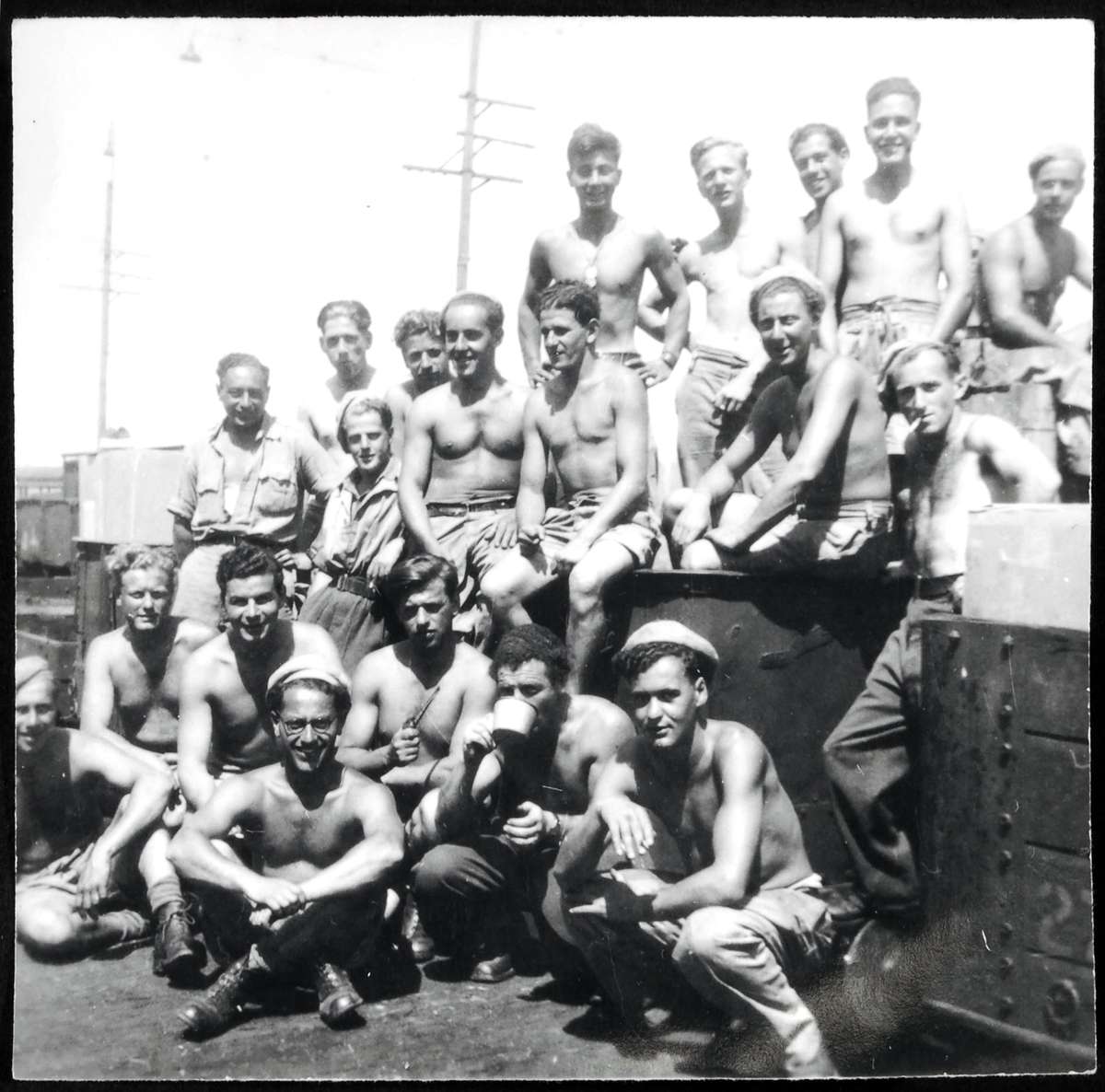 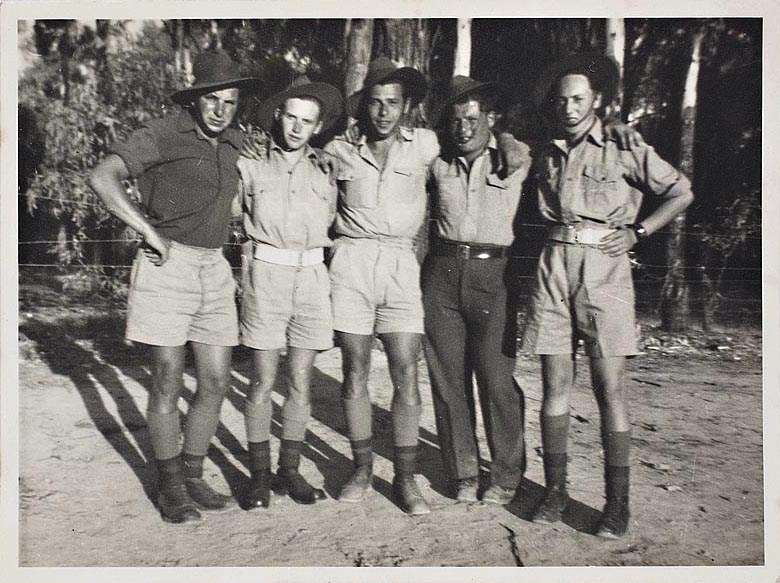 The 8th AEC. Boys of the Company. From left to right; Fred Broch, Walter Morstaedter, Altschol, Gussman and G. Sonneald, c. 1943. Courtesy of the Jewish Museum of Australia.

Over time many of the men of the 8th AEC came to realize that family left behind in Germany were most likely no longer alive. Returned letters and news from abroad had shown that the persecution of the Jewish population in Germany had reached catastrophic proportions. Broughton became a father figure to many of the younger men. His guidance and encouragement went a long way to install hope to those who had lost everything and a tentative faith that they may have a future in Australia.

At first glance Broughton was a tough looking man who slept rough and ‘could hold his grog’ yet he encouraged both the practical and artistic endeavours of the 8th AEC. He bought longed for clay for sculptors and showed concern for the safety and care musician’s hands. Singer Eric Liffamn recalls:

‘When one of our boys was training for his heavy duty drivers licence; whilst pulling away from Claridge’s exclusive nightclub in Toorak, after we had given a charity performance there, the truck hooked two Corinthian pillars supporting the veranda, which then collapsed. Captain Broughton calmly re-entered Claridge’s and ordered..:”Get somebody to prop this up and find out straight away what the damage will cost!” On the spot, he paid the bill and the matter was never mentioned again.’ 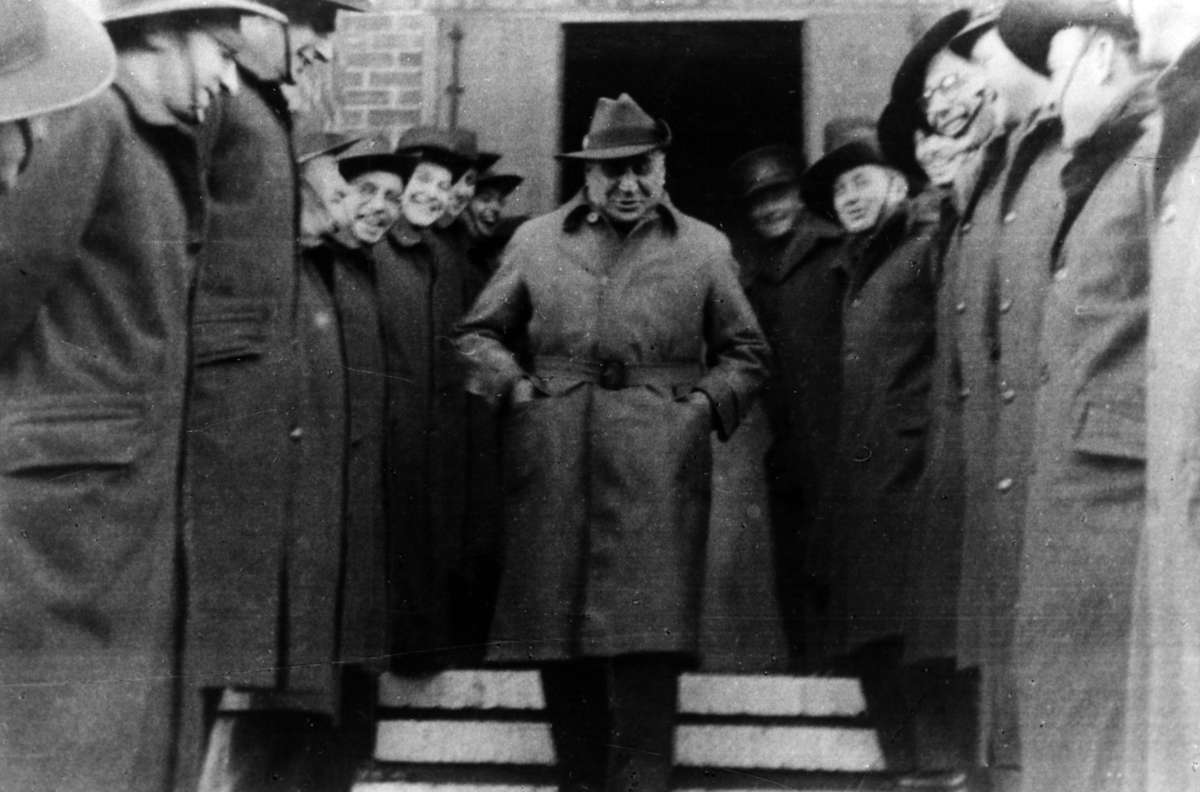 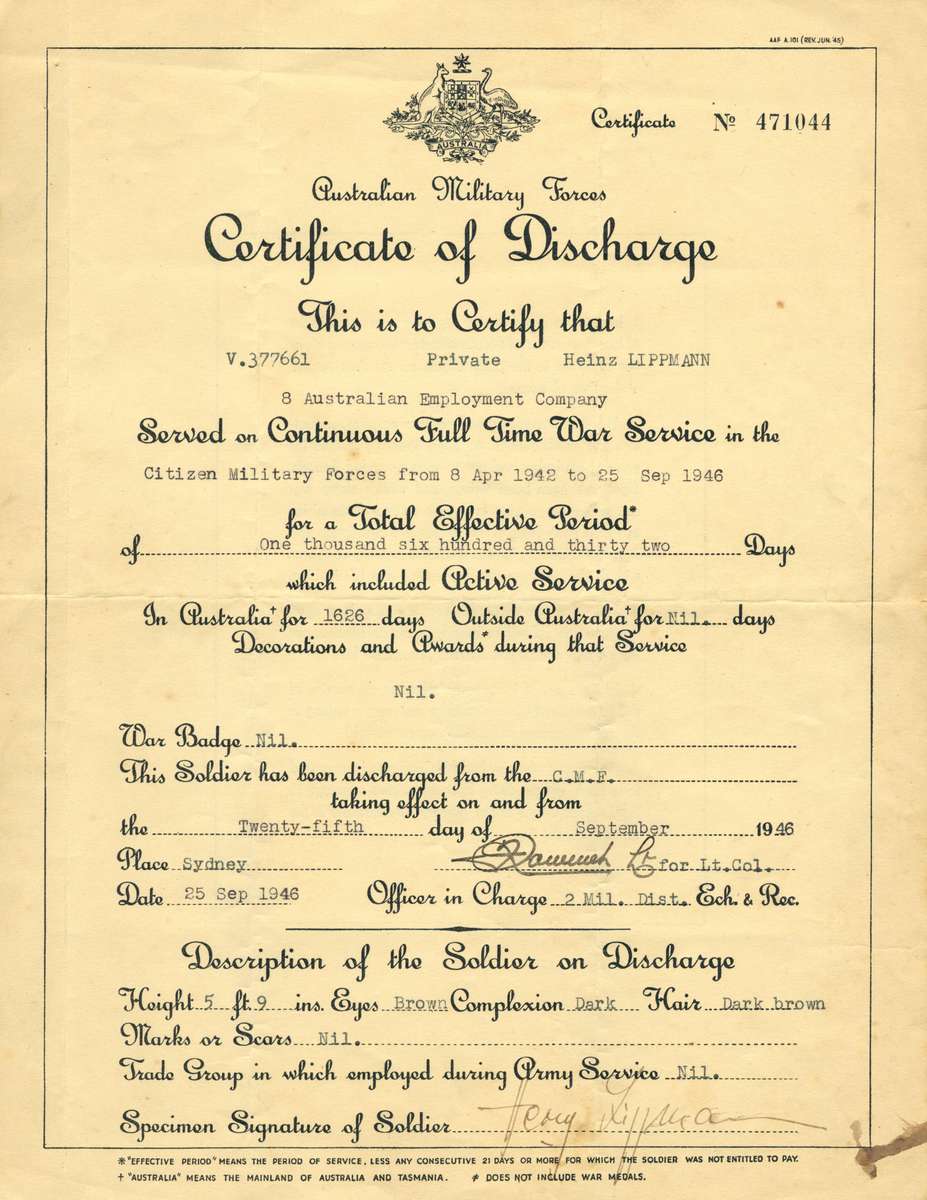 When the ex-interns of HMT Dunera joined the 8th AEC, it is not hard to imagine the treatment they probably expected to find. Having been despised and persecuted in Germany, expelled from England, beaten and robbed on their way to be internees in Australia, the men must have been prepared for more of the same. What they found in Broughton however was a man of great compassion and understanding. A man who showed no prejudice to where they had come from, how they spoke or what they believed in.

In essence Captain Broughton was more than they could have expected and exactly what they needed.

Curious to see more of our collection? Check out our Google Cultural Institute and Flickr pages to see more stories from across the seas.

From ‘Aliens’ to Australians – Remembering Dunera 75 Years On is currently on at the Jewish Museum of Australia.

View all posts by Myffanwy Bryant→
Posted in: From the collection , Navy and defence
↑