Rheumatism sufferers in the late 19th and early 20th centuries were bombarded with many strange potions, lotions and pills – all claiming to cure their complaints. None were perhaps as strange, or stomach churning, as the curious cure practiced in the seaside town of Eden, Twofold Bay.

‘When a whale is killed and towed ashore and while the interior of the carcass still retains a little warmth a hole is cut through one side of the body sufficiently large to admit the patient, the lower part of whose body from the feet to the loins should sink in the whale’s intestines, leaving the head, of course, outside the aperture. The latter is closed up as closely as possible, otherwise the patient would not be able to breathe through the volume of animoniacal gases which would escape from every opening left uncovered.’ 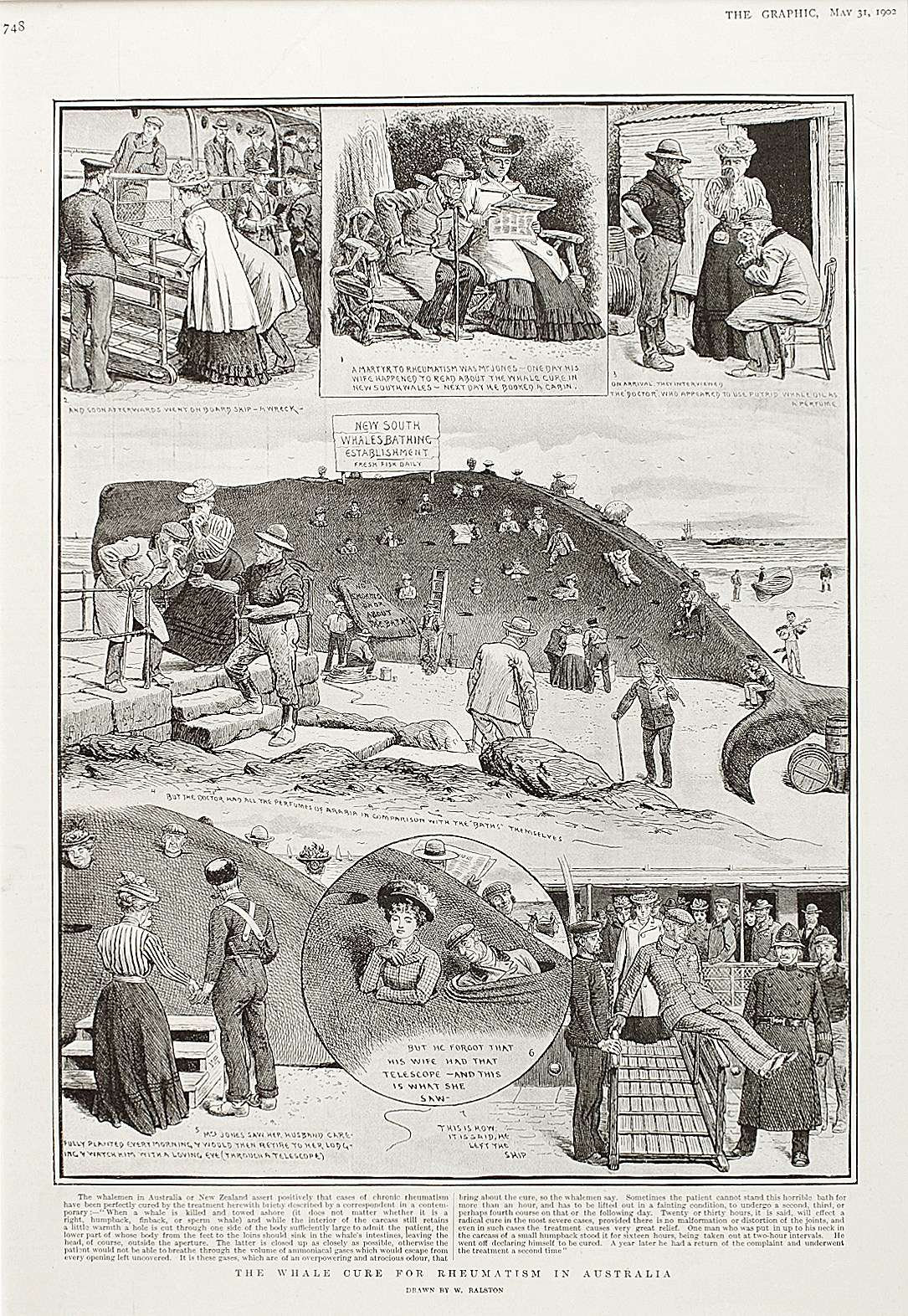 The Whale Cure for Rheumatism in Australia, published by The Graphic, illustrator William Ralston, 31 May 1902. ANMM collection.

In order for the cure to work most effectively, the patient was expected to remain within the whale carcass, at intervals, for 20 or 30 hours, after which they would be relieved of their rheumatic pain for up to twelve months. The cure was briefly popular in the early years of the 20th century when it gained notoriety and, perhaps unexpectedly, medical credibility.

It was believed that the heat and gases produced by the decomposing whale combined to create a ‘sweat box’ environment, relieving the pain of rheumatic disorders. Reports of the cure first appeared in Australian newspapers 1894, before spreading quickly to New Zealand, America and Europe. In 1896 the Dublin Journal of Medical Science reported on the cure, and the following year the respected American publication ‘Medical Record’ also devoted an entry to the ‘Whale Cure’, likening it to a large poultice that encompassed the patient’s aching body.

All reports of the ‘whale cure’ practice led to one place: the town of Eden in Twofold Bay. Eden had been settled since the mid-1800s and supported a prosperous whaling industry that practiced a particular method known as bay whaling. Bay whaling meant whalers hunted migrating whales out of small boats based from shore-stations, rather than heading to sea in large ocean-going vessels. In this way, the carcasses were towed back to shore to complete the task of stripping the blubber (rather than onboard at sea) providing ample opportunity for visitors to Eden to try the famous whale cure. 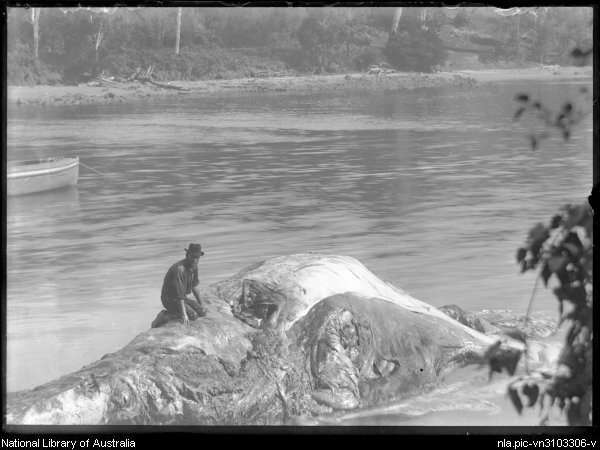 A cure for rheumatism; Bob Wiles in the carcass of a whale, Twofold Bay c 1900. National Library of Australia image vn3103306

Contemporary newspaper reports provide a variety of explanations as to the origins of the whale cure. One claims the first man to try the cure stumbled upon it accidentally after falling drunk into a carcass, becoming stuck and emerging free of his rheumatism (and sober) hours later. Another attributes the first case to that of a well-known businessman who approached the Davidsons, a prominent local whaling family, to allow him to try the treatment when they next brought a whale to shore. After spending a day buried within an ‘oleaginous cavern’, the man emerged cured.

The real foundation of the whale cure, however, stretches back beyond European settlement to the practices of the indigenous people of Twofold Bay. Whales and other sea creatures feature strongly in the spiritual beliefs of the local Yuin people who were familiar with beached whales and had different uses for the washed-up remains. Bones could be utilised in the construction of shelters, flesh for food and oil for medicinal and ritual purposes. After the establishment of a whaling industry in Eden in the 1800s, the connection continued and the skills of Aboriginal whaleboat crews were highly regarded by local businesses.

R.H. Mathews in his 1904 Ethnological notes on the Aboriginal tribes of New South Wales and Victoria. (Journal of the Royal Society of New South Wales. Vol 38:252-253) observed the Aborigines of Eden undertaking the whale cure for rheumatism. After the meat and blubber were removed from a whale carcass, he wrote, the Aboriginal people would lower themselves into the body and cover themselves with whale fat to treat their pain. (See HERE for Aboriginal rock carvings in the Sydney area that are believed to depict the whale cure.) It was not long before knowledge of this treatment was transferred and Eden’s local businesses were more than happy to accommodate those willing to pay for the experience.

As whaling declined in Eden so too did the practice of the whale cure, which ceased to be practiced by about the First World War. However, perhaps people stopped undertaking the whale cure for a very good, and rather malodorous reason:

‘The after-effects are not so pleasant; the patient for a week or so gives off a horrible odour, and is abhorrent to man and beast, and a fit subject for prosecution under the ‘Diseased Animals and Meat Act’. 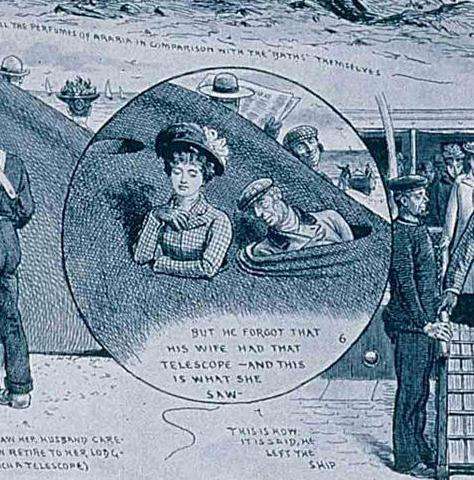