Leigh told me he still had his father’s Graflex Crown Graphic camera, camera accessories and a box of negatives including some from swimwear fashion shoots in the 1950s. I jumped at the chance to see his father’s commercial work and so we met at the museum’s photography studio to view the negatives.  Leigh kindly allowed our photographer Andrew Frolows to digitally scan a selection of the negatives into positives. This process revealed arresting fashion images that were clearly perfect for inclusion in the museum’s swimwear exhibition.  I was hooked.

Discussions were soon underway to borrow Gervaise Purcell’s photographic equipment and a selection of images for display. 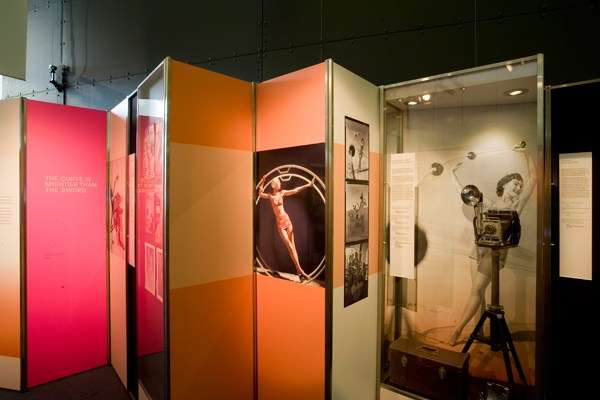 At the time I hoped that the museum would eventually acquire this rich and diverse photographic archive as much of Purcell’s commercial photographs had not been seen publically for decades and were a valuable record of Australian maritime related business ventures in the second half of the twentieth century.

In the intervening years I kept in touch with Leigh and to my delight in 2012 he offered his father’s photographic negatives and equipment to the museum. I wrote a proposal to acquire this material into the National Maritime Collection which was thankfully approved.  First hurdle leapt.

Now the substantial and exacting task of documenting and scanning the collection of 3,000 negatives is underway.  Our registrar Tennille Noach is bringing the collection to light so you can enjoy these evocative photographs as much as we both do. Look out for Tennile’s upcoming blog post about this fabulous photographic collection.

View all posts by ANMM Guest→
Posted in: From the collection , Arts and Culture
↑