“Away, away to Broken Bay!” 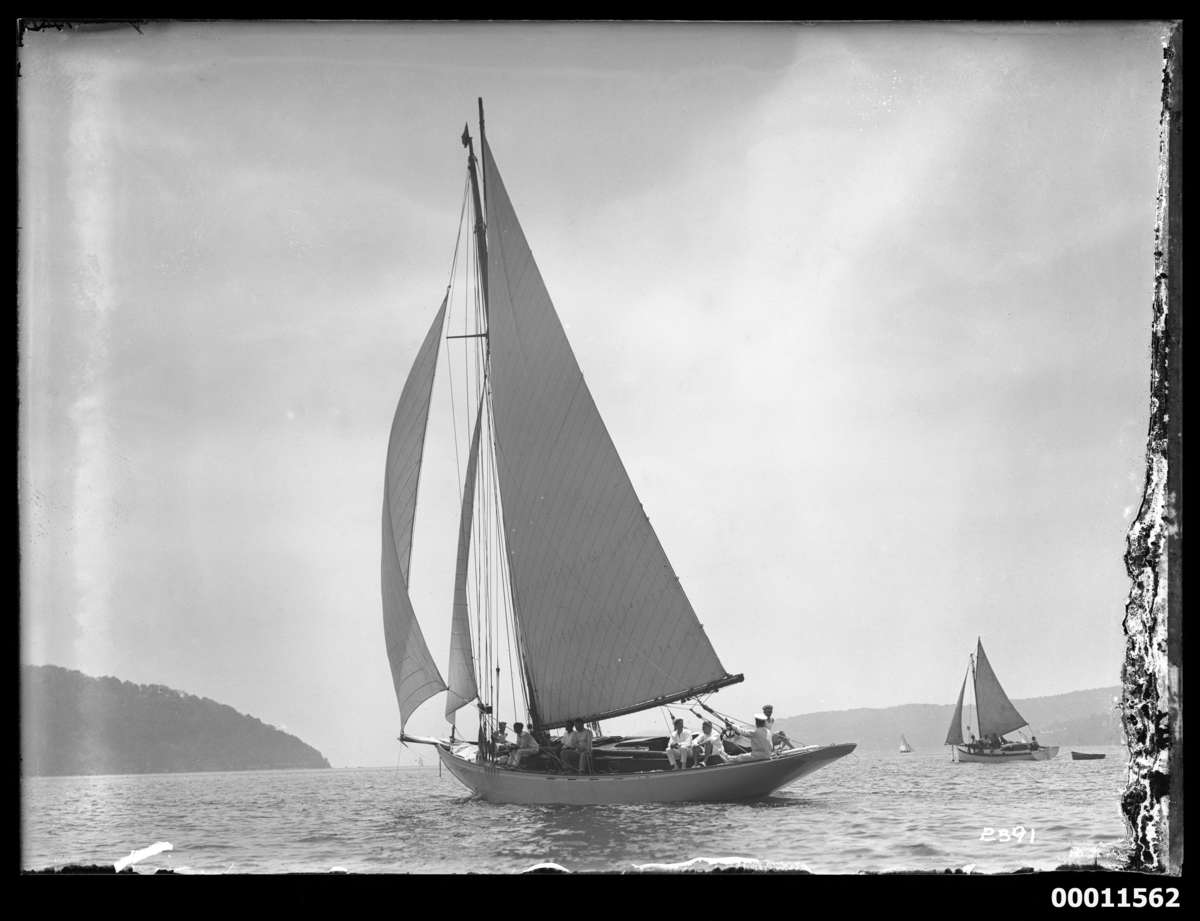 Sloops under sail, possibly at the Pittwater Regatta. ANMM Collection 00011562

The beauty of Pittwater had been noted early on in European settlement by none other than Captain Arthur Philip who had described its tranquillity in a despatch to the English Government and subsequently named the site after William Pitt, the English Prime Minister.

Throughout the late 1890s, the area grew to be a popular attraction for boating and yachting enthusiasts who were drawn to its waters and hospitable bays during the summer months. Then, in 1906, a challenge between two locally-built skiffs led to the establishment of an official regatta program. The event grew over the years to include rowing and motorboat races as well as a series of social events and balls. Aside from the wartime years, the Pittwater Regatta continued in one form or another until 1979.

One of the men who had competed in the original race in 1906 was local sailing identity John Roche. Roche was an avid sailor who went on to join the founding committee of the Pittwater Regatta as Honourable Secretary, a role he upheld tirelessly for the next 24 years. Roche is often referred to as the ‘father of the regatta’ and after his death in 1936 a new memorial trophy for large class sailing yachts was instituted in his name. 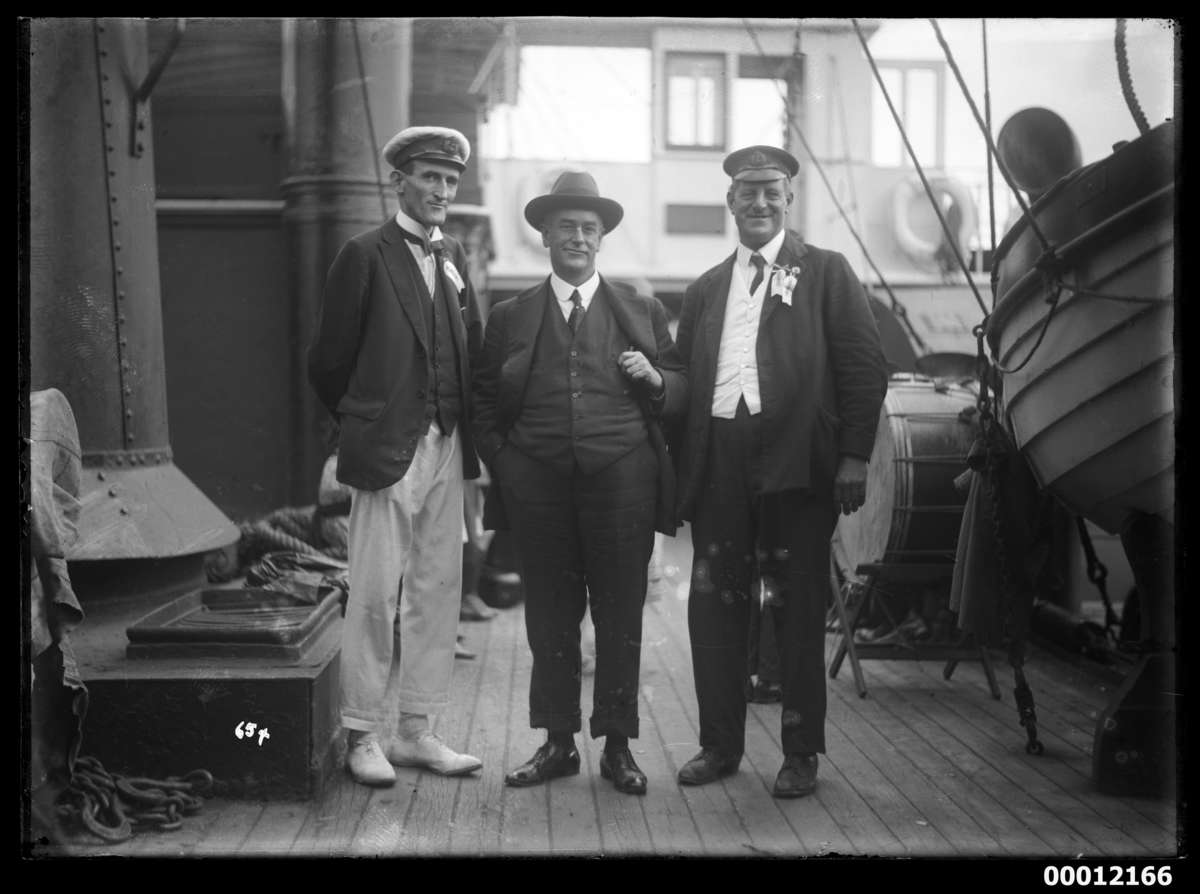 It was an image of John Roche (above) that recently led us to identify a cache of previously unrecognised photographs of the Pittwater Regatta in the museum’s William Hall collection. (You can view a selection of these images online.) A regular contributor to our account on the photo-sharing site Flickr spotted Roche’s unmistakable style and stance in one image. On closer inspection the photograph revealed him to be wearing a ribbon reading ‘Honourable Secretary’ while one of his companions (identified as Mr Fred Young) bore ribbons reading ‘Commodore’ and ‘President’. These details led us to confirm that the image was taken onboard the flagship Namoi during the 1921 Pittwater Regatta.

This identification led to another Flickr user discovering an article in The Sydney Mail that contained many more photographs of the regatta – photographs that were identical to images in our collection – and names, locations and vessel details started to pour in. 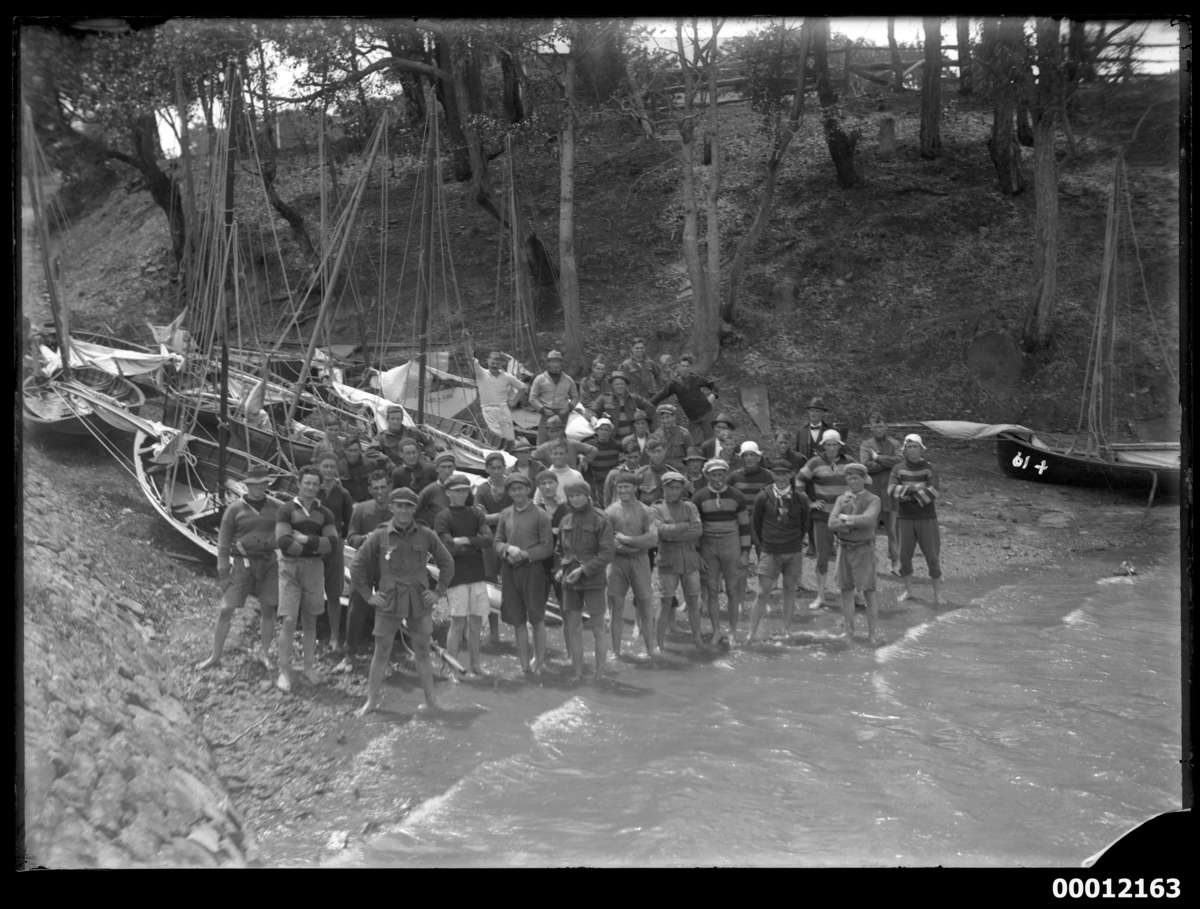 Crew and yachts at Newport waiting for the weather to clear during the 1921 Pittwater Regatta. ANMM Collection 00012163 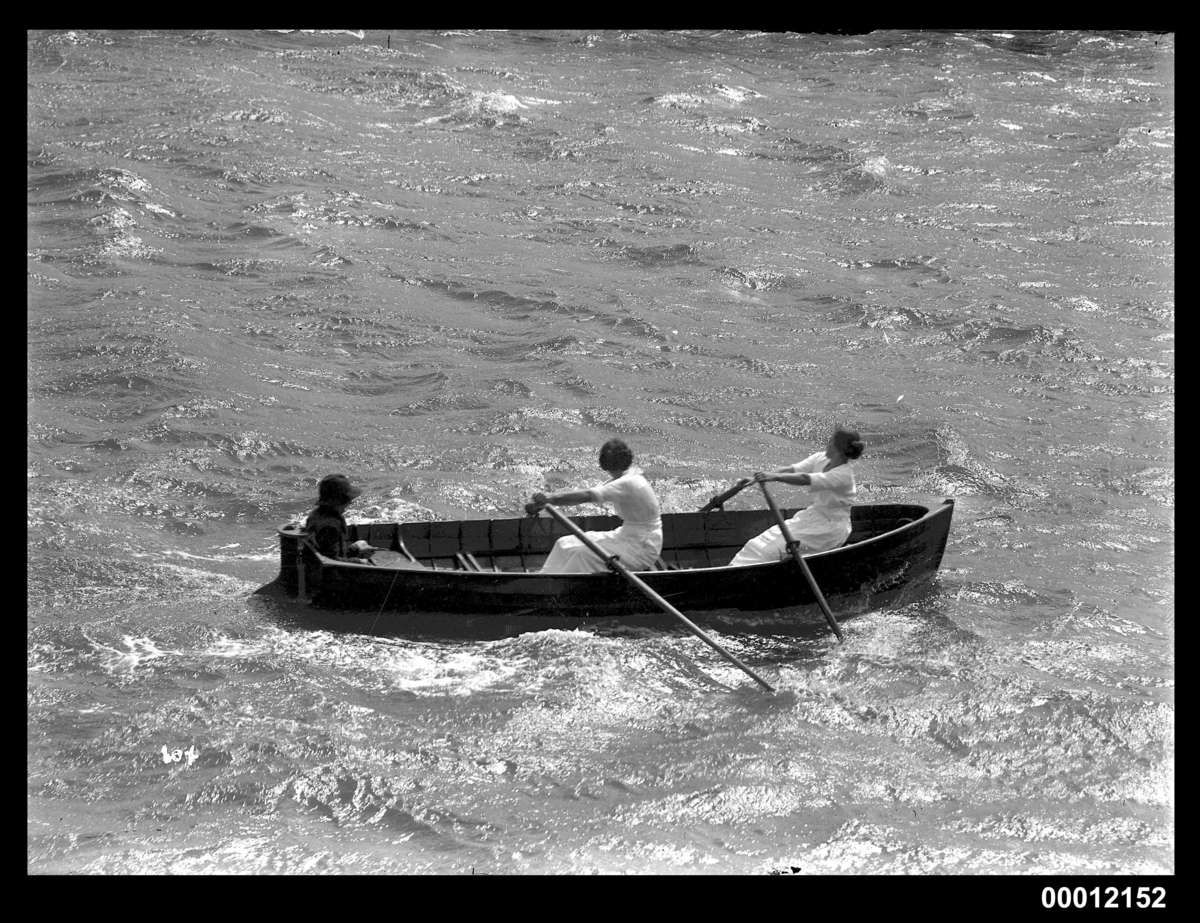 Along with John Roche and Fred Young, several of Sydney’s prominent sailing faces appear in these historic images including the indomitable David Carment, a fascinating man that Nicole profiled in an earlier blog and who features in one photograph of regatta officials.

The museum’s Pittwater images all date to the 1920s, when the regatta was enjoying a return to popularity after the close of World War I. During this period a steamship would be organised to act as flagship, carrying visitors from Sydney to Broken Bay as well as providing the location for many of the regatta’s social gatherings. Several of the flagships, such as SS Archer, Namoi and Fairlight make appearances in the photographs as do the various spectator vessels. In 1925 the tugboat Antarctic was lent by Rear-Commodore Bob Alexander to transport spectators between the shore and the flagship (SS Archer) – an action that did not go un-recorded by Hall’s camera. In addition to these larger vessels, the stars of the show – the yachts – are also represented and include historic vessels such as Sir Alex McCormick’s Ada (now Astor) and Frank Albert’s beauty Rawhiti (both on the Australian Register of Historic Vessels). 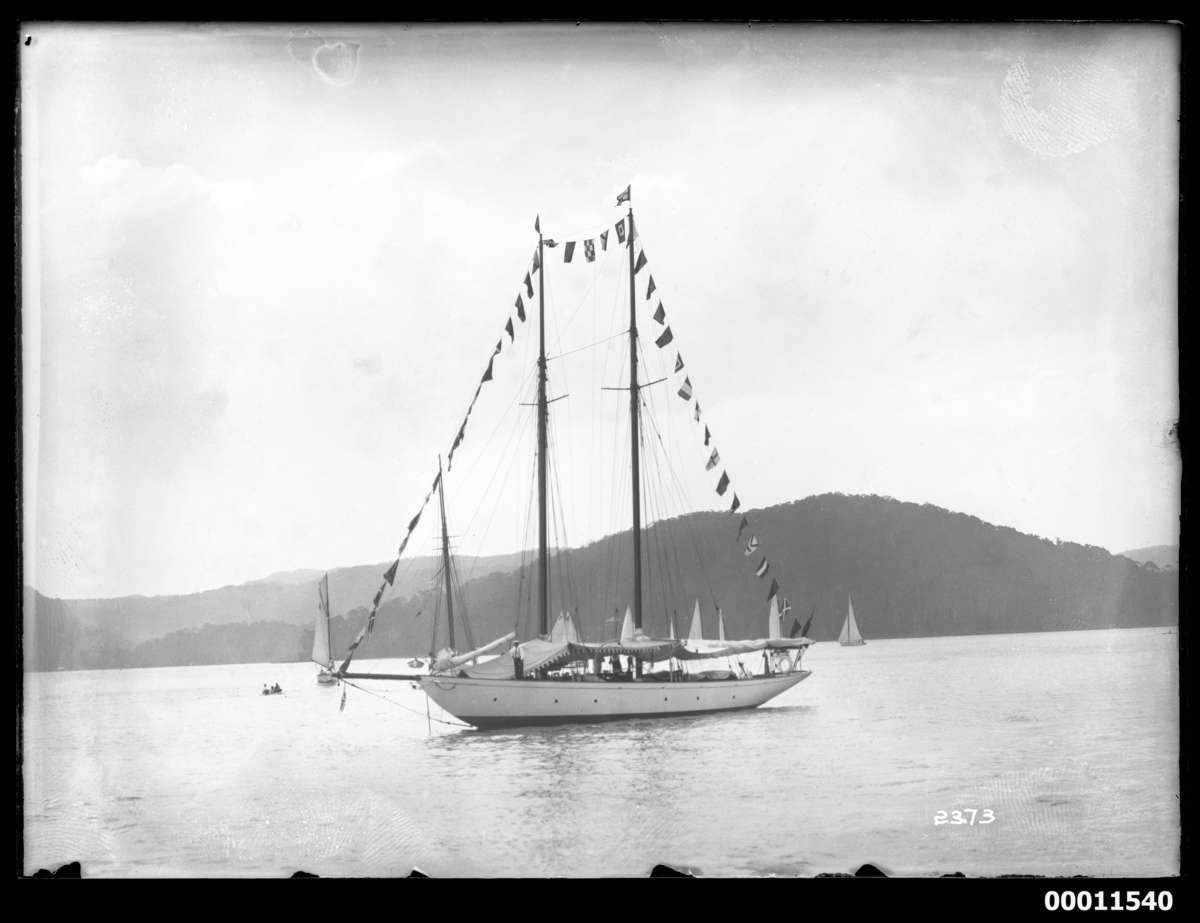 Schooner ADA with bunting at the 1928 Pittwater Regatta. ANMM Collection 00011540 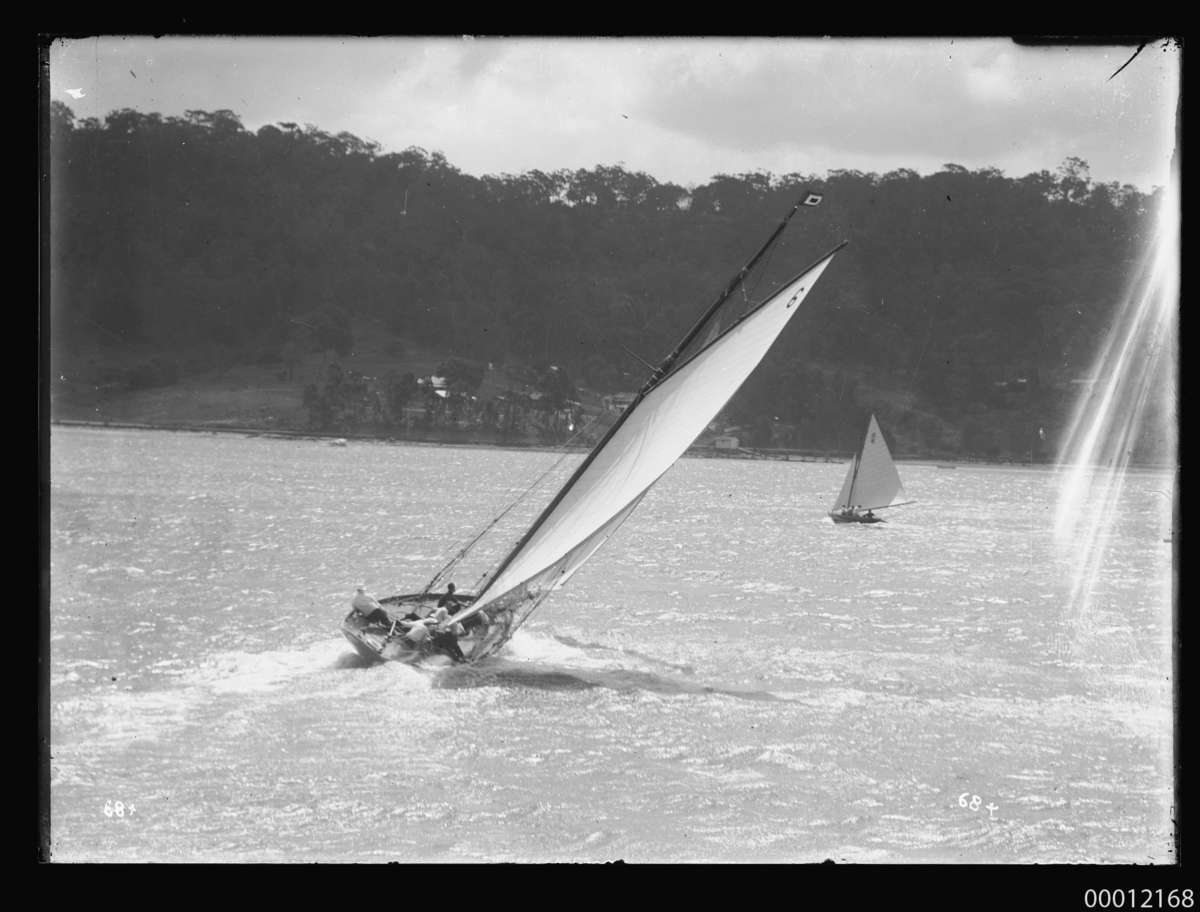 The presence of yachting luminaries, legendary yachts and delighted spectators in these photographs all convey the significance of the Pittwater Regatta, as both a sporting and social occasion during the 1900s. The images record the fleeting glory of champions, a passing breath of wind filling a sail and – most prominently of all – the enduring beauty of Pittwater.

In 2007 the Centenary Pittwater Regatta was held to celebrate this event and recreate the atmosphere of this historic regatta.