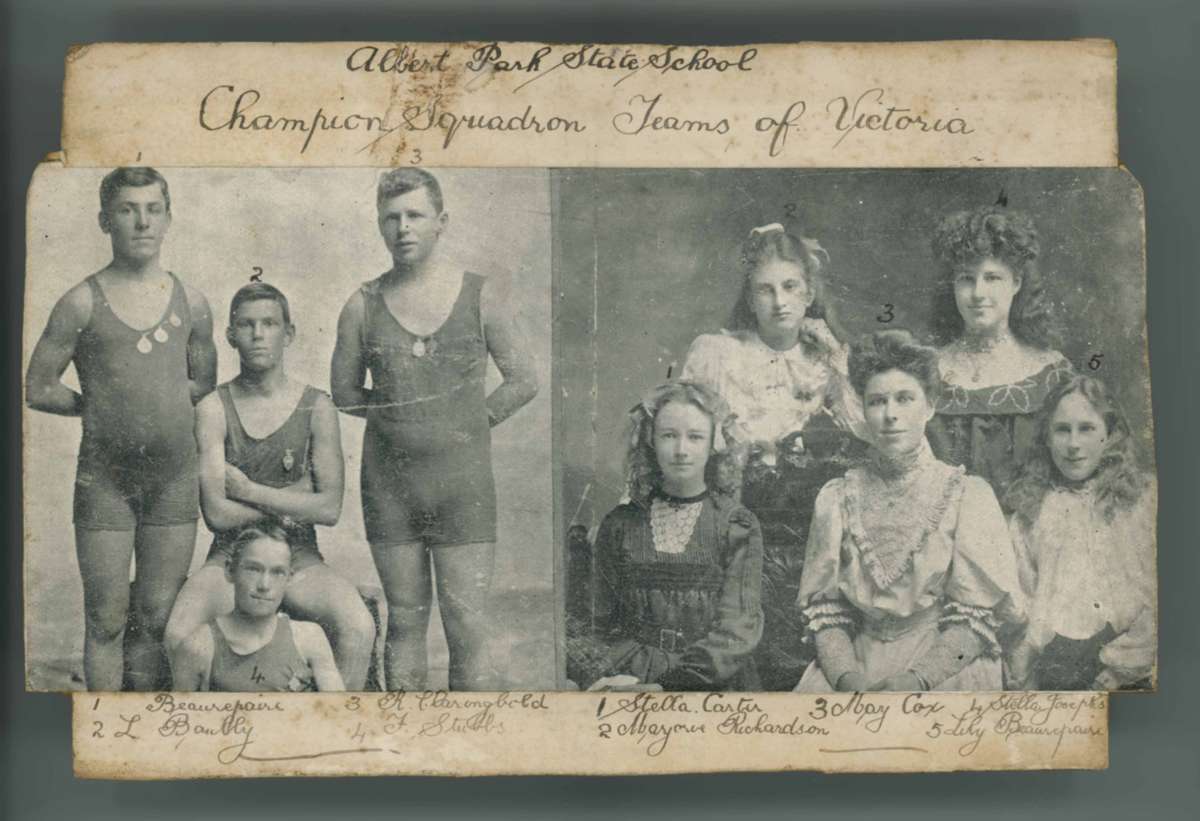 The young school boy standing at the back left of this image would one day grow to be Sir Francis Beaurepaire; Lord Mayor of Melbourne, Olympian, politician and successful rubber goods manufacturer. However in a life that was packed with civic achievements and sporting glory, it was Beaurepaire’s role in a daring shark rescue in 1922 that, for a time, propelled him into the spotlight and captured the public’s imagination.

During his youth Beaurepaire established a reputation as a remarkably talented swimmer. The image above was taken during his time at Victoria’s Albert Park State School where his skills in the sporting arena were nurtured from a young age. (His sister Lily, seen seated front row right, also attended the school and went on to represent Australia in swimming and diving at the Antwerp Olympics).

In 1906, at the age of 14, Beaurepaire won his first Victorian title. In 1908 he won three titles at the national championships in Perth before heading overseas to represent Australia at the Olympic Games in London as well as several other European championships. These achievements reached a peak when, in 1910, the Helms Athletic Foundation of America awarded Beaurepaire its trophy for best athlete of the year after he set several European records and won seven English titles.

Returning to Australia, Beaurepaire became a swimming instructor in 1911 and was declared a professional, excluding him from competing in amateur events. After the close of World War I however, Beaurepaire did not return to his job as an instructor and instead staged a comeback in the competitive swimming world where he competed at both the 1920 Antwerp Olympics and the 1924 Paris Olympics.

In 1922 – the same year he founded the Beaurepaire Tyre Service – Beaurepaire found himself utilising his world-class swimming skills in a life and death situation on a popular Sydney beach.

On 4 February 1922, 19 year old Randwick man Milton Coughlan was swimming past the breakers at Coogee Beach when he was attacked by a shark at about 3pm. Coughlan was himself a member of the North Bondi Surf Life Club and had the presence of mind to shout to other swimmers to get out of the water, however the incident unfolded swiftly and viciously – leaving him struggling with terrible injuries that included the loss of both of his arms.

Newspaper reports salaciously describe the unfolding attack, some recounting in exaggerated detail the bloody moments of Coughlan’s brave fight with the shark:

“The horrified crowd next saw for some minutes a shark and the swimmer thrashing around in a welter of blood-stained water and scarlet flecked foam… With one snap of its jaws the brute tore off Coughlan’s arm, but the plucky boy… tried to beat off his savage assailant.”

Back on the beach, surf life saver Jack Chalmers was the first to plough into the water, having first grabbed a life line and tied it around his waist. He quickly reached Coughlan and is said to have assisted in beating the shark off the boy, causing it to release its grip. However the blood in the water was attracting more sharks to the struggling pair.

“And now Chalmers has his man. He literally has to tear him from the shark’s jaws. “Don’t let go of me Jack!”” cries out Coughlan. It is his first cry for aid and is torn from him by terrible torture…”

Beaurepaire, also on duty as a life saver, saw the action from his position in the surf shed and raced down to the shark-infested water, reaching Coughlan’s side soon after Chalmers. Despite the danger the two men, with the assistance of several bystanders, managed to bring the victim back to the shore.

Slowly the pair are drawn to the shore, and meanwhile that champion of champions, Frank Beaurepaire, and a Mr Green of Coogee… have dived in and helped in the rescue…

Sadly, due to the devastating nature of Coughlan’s injuries, he died in hospital soon after.

In the weeks that followed the rescue, the incident was reported widely in the press who tapped into the public’s fear of and fascination with sharks. The media focussed their reporting on the heroism of Chalmers and Beaurepaire and public appeals were made to provide those involved with a monetary reward. Beaurepaire received around £500 and was also awarded the gold medal of the Royal Humane and Shipwreck Society of New South Wales. The acting premier, Mr C. W. Oakes, declared that the bravery demonstrated by the men during the rescue was the equal to those acts that had received the military’s highest honour for bravery; the Victoria Cross – high praise in a world still reeling from war.

Interestingly, despite his talents in the pool and 15 world records, Beaurepaire never won an Olympic gold medal in his lifetime. His swimming skills however, were put to the ultimate test that day at Coogee Beach, where, played out in tragic circumstances, they passed with flying colours. 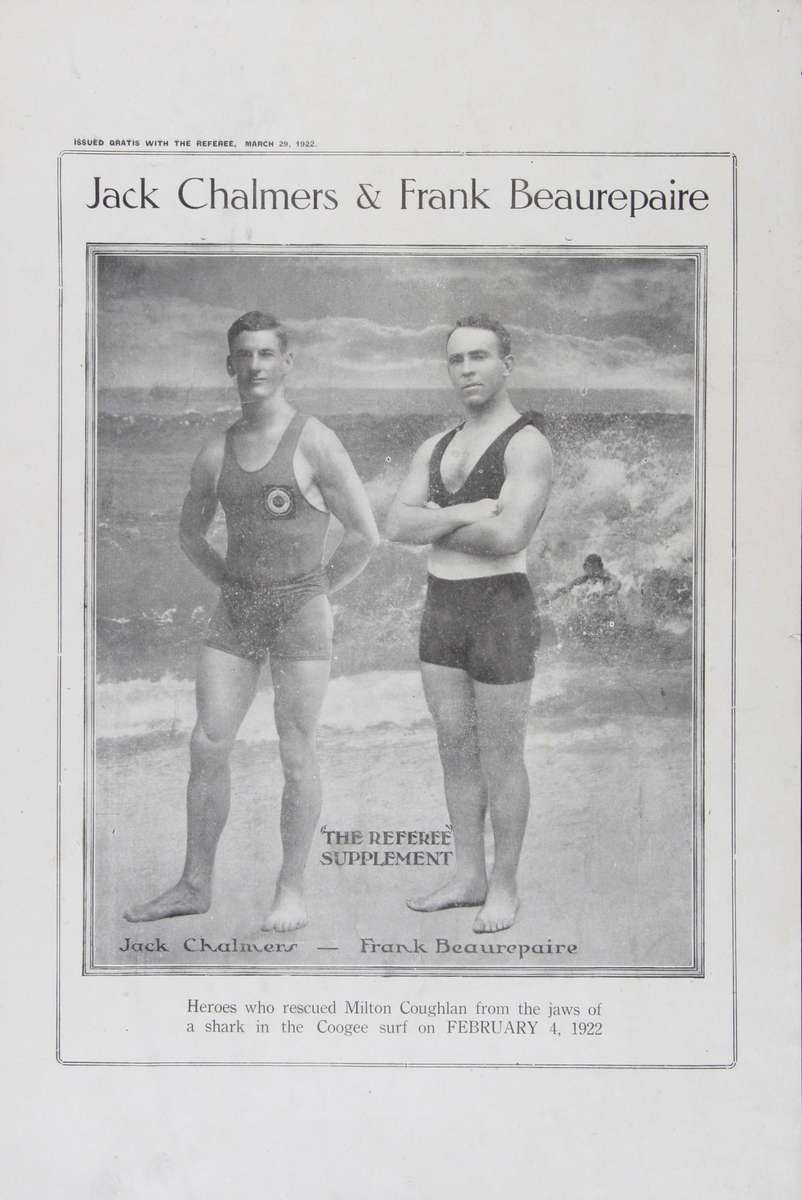 Souvenir supplement to the Referee, 29 March 1922 depicting a black and white photograph of Jack Chalmers and Frank Beaurepaire posing against a backdrop of a surf beach. ANMM Collection 00039777