As a novice to the art of boatbuilding, I was recently lucky enough to get a lesson from one of the masters.

Bob McLeod is taking part in a project to build a replica of the champion 18 foot skiff MYRA TOO, and he was kind enough to show me the ropes and patiently answer my questions when I visited his workshop several weeks ago. 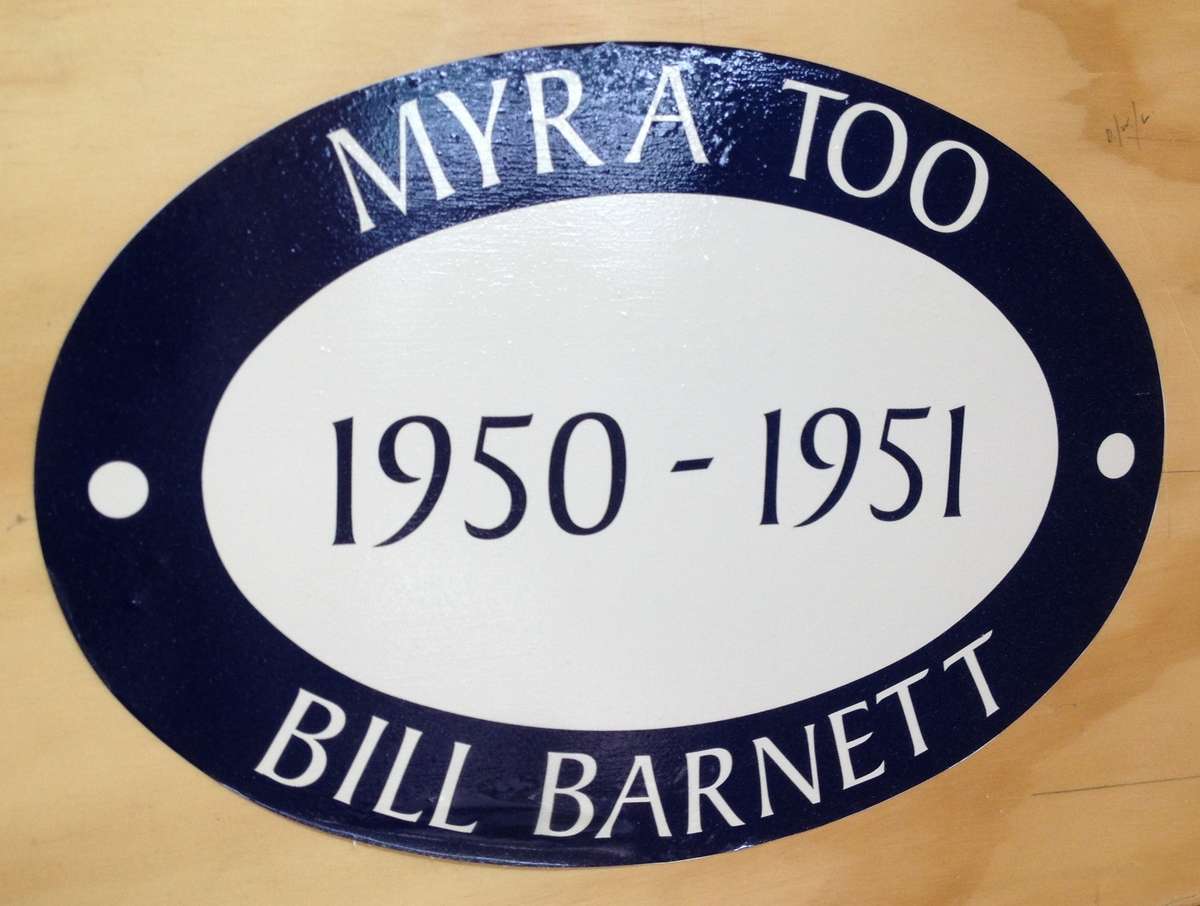 The project is supported by the Australian Open Skiff Trust which aims to build replicas of significant boats from the period up to and including 1950. MYRA TOO was built at the cusp, in 1950, and raced in 1951 where the vessel was the State, National and World Champion 18 footer. MYRA TOO was designed, built and raced by legendary boat builder Billy Barnett, from Berrys Bay, Sydney.

Bob is building the replica with the assistance of Australian National Maritime Museum curator David Payne who supplied advice and drew up the initial plans in his spare time, as the originals were lost in a fire. I wrote about the beginnings of this project in an earlier blog. 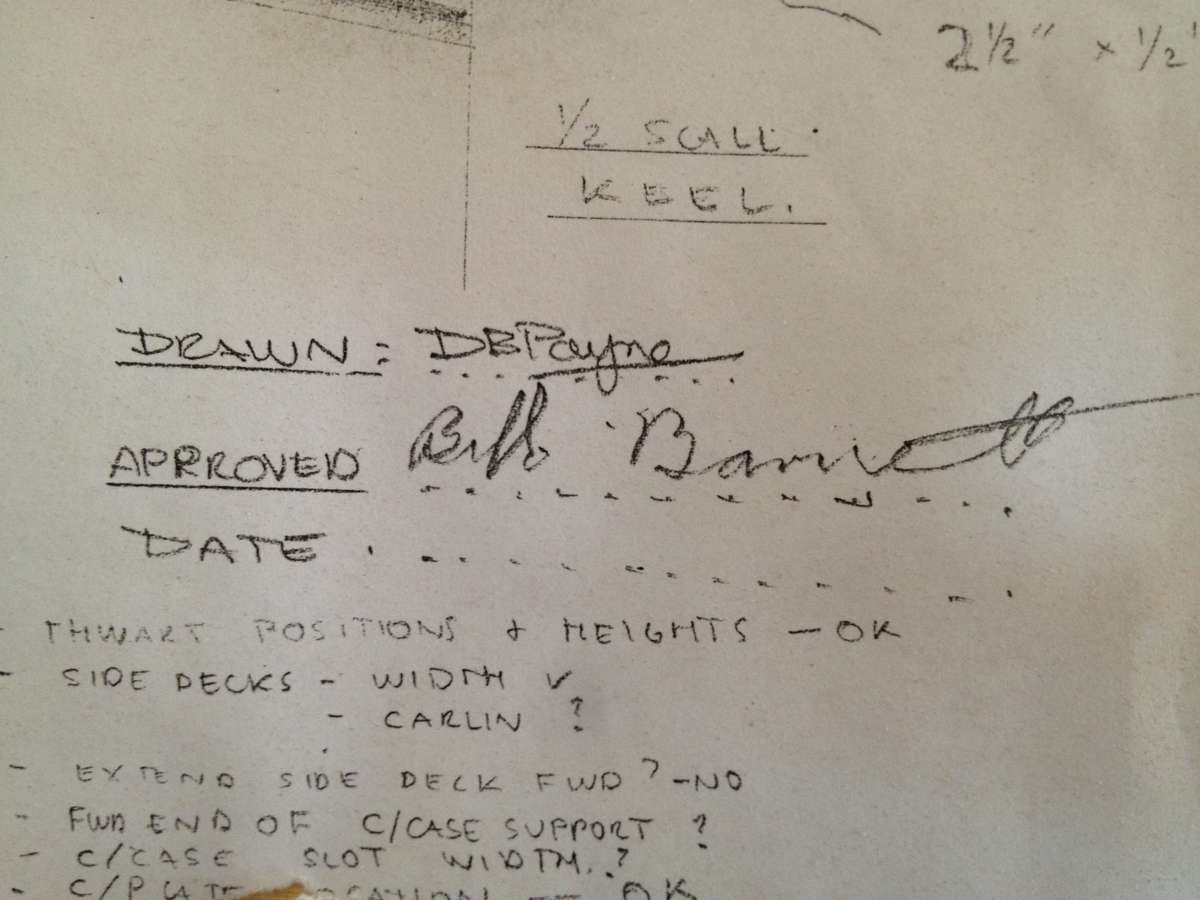 Bob showed me around the workshop he has built specifically for the project and talked me through the process of the build. (I hope my notes are correct – forgive me Bob if not!) Using David’s plans and then a wooden half-model based on those lines, Bob drew the outline for the wooden pieces that will make the ‘mould’ around which he will build the boat. He traced the mould outlines onto mylar and cut to plan the pieces of wood for each mould frame. When I visited Bob had already placed the silver ash keel across the base and was preparing to add the silver ash stringers, and finally the frames which he will steam bend before attaching. He will then be able to glue on three thin layers or ‘skins’ to the frames to complete the hull, the second of plywood and the first and third (the outer layer) of Queensland red cedar which will make for a beautiful finish. 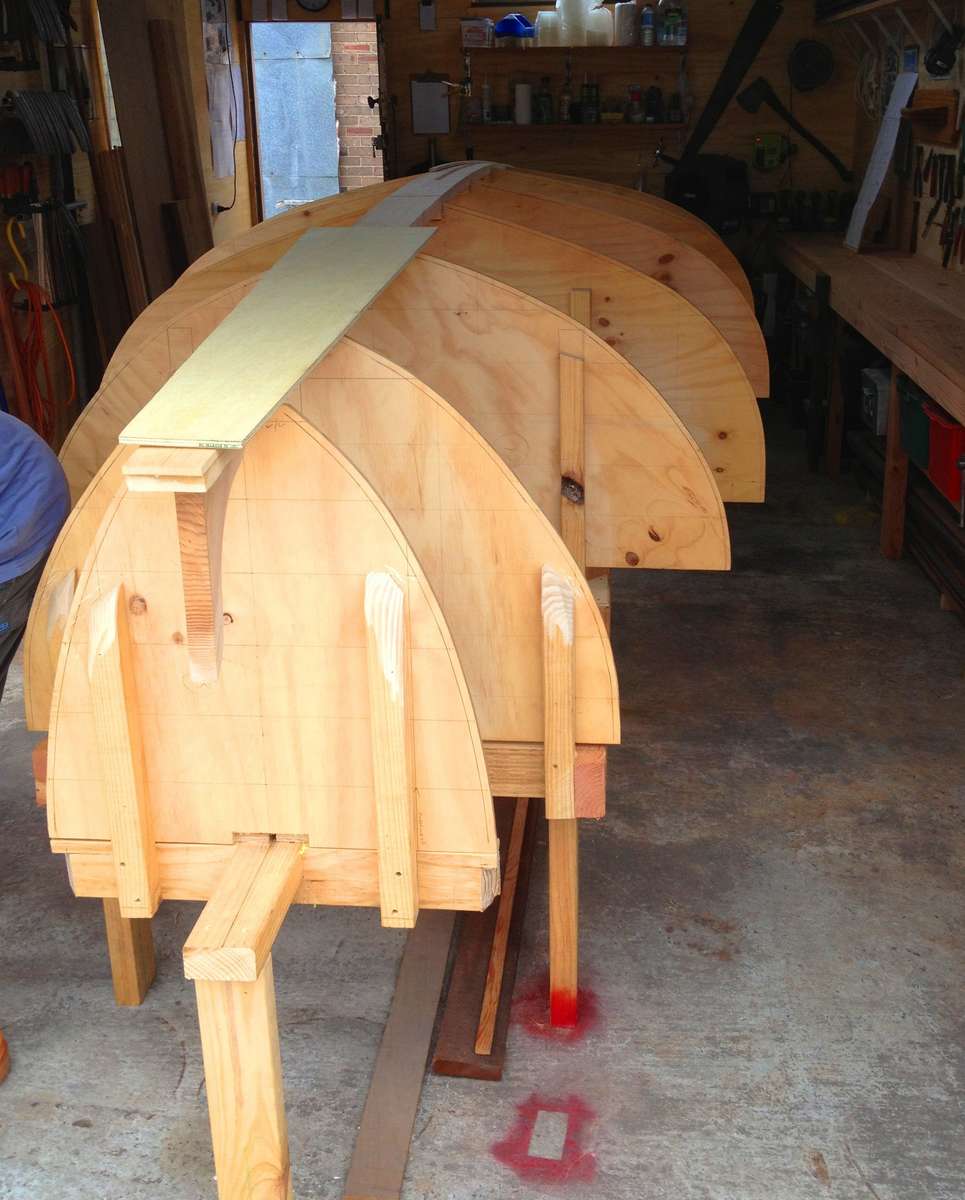 The work so far. The silver ash spine is laid across the ‘mold’. Photo by Penny Hyde 2013

Like the other replicas already sailing, this will be a truly historic boat. Not only is it capturing the spirit of a legendary 18 footer, the attention to detail in its construction will bring together many historic elements. Bob himself was apprentice to Billy Barnett and remains close to MYRA TOO’s original designer who is now in his 90s – there is no one better placed to rebuild this vessel. Additionally, Bob has sourced wood to use that has historic connections to the original boat. He is using wood from Billy’s own collection, as well as pieces of Oregon wood from a cruiser built by Billy and material from the original Surveyor General’s building. Bob is also using some unusually long pieces of red cedar for the final ‘skin’ of the boat – rare, beautiful and estimated to be between 400 – 600 years old. Bob will also be incorporating wood from another champion vessel built by Billy Barnett, GRETEL II, (designed by David Payne’s uncle Alan Payne) which raced for the America’s Cup in 1970. 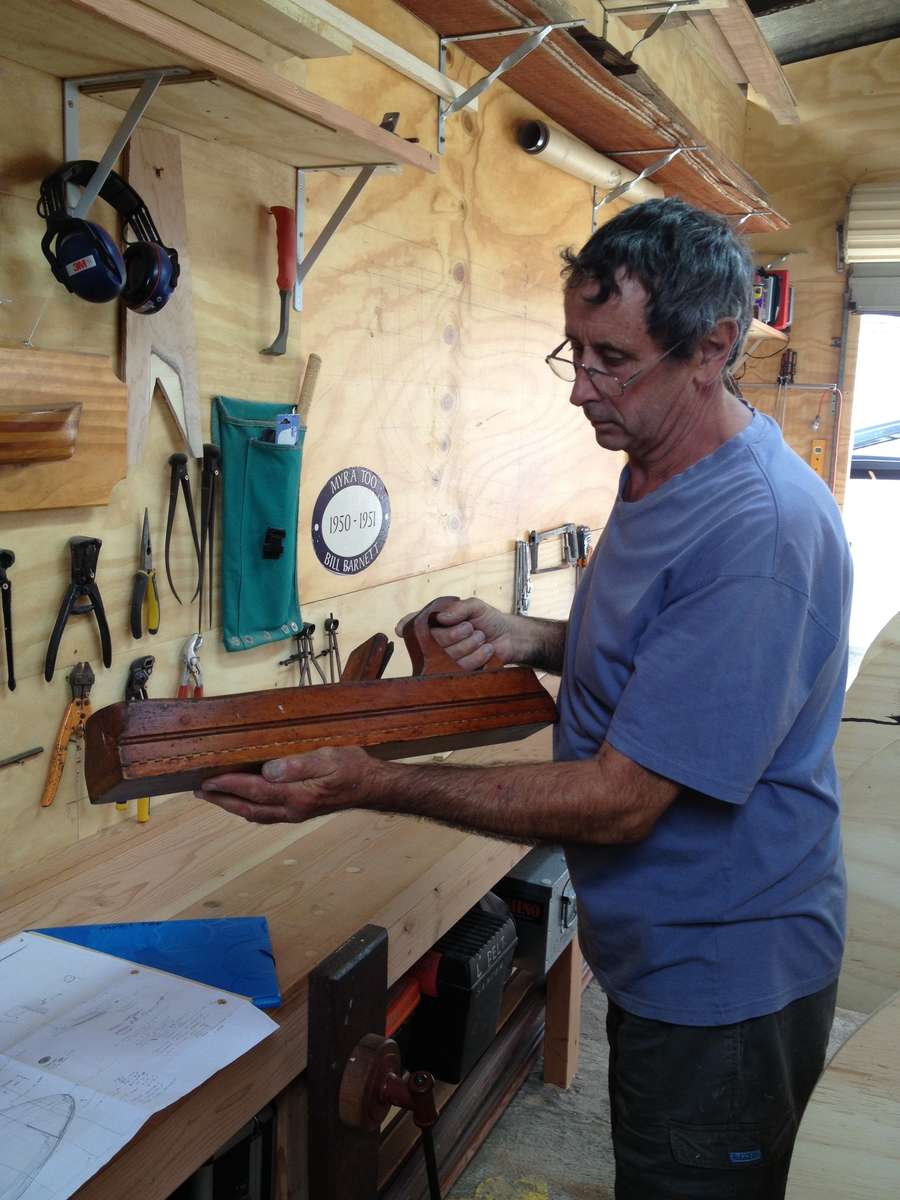 Bob McLeod in the shed he built specifically for the project to build the replica MYRA TOO. Photo by Penny Hyde 2013

Bob has already had a MYRA TOO emblem made up and this is displayed on the wall of his workshop, the vessel’s original emblem composed of dark and light blue. The historic photos of MYRA TOO in the Australian National Maritime Museum depict the vessel sailing on Sydney Harbour and winning the 1951 National 18 footer title. The images are, of course, in black and white, so it will be fantastic to see the vessel brought to life by Bob’s hard work and in full colour. We will continue to follow the project to build this champion replica, so keep an eye out for updates on the development of this historic replica vessel.

To donate to the MYRA TOO project, please head over to the website of the Australian Open Skiff Trust for more information.

Read the blog on Myra Too‘s designer and builder Billy Barnett.
See the photos of the Myra Too build as it comes together. 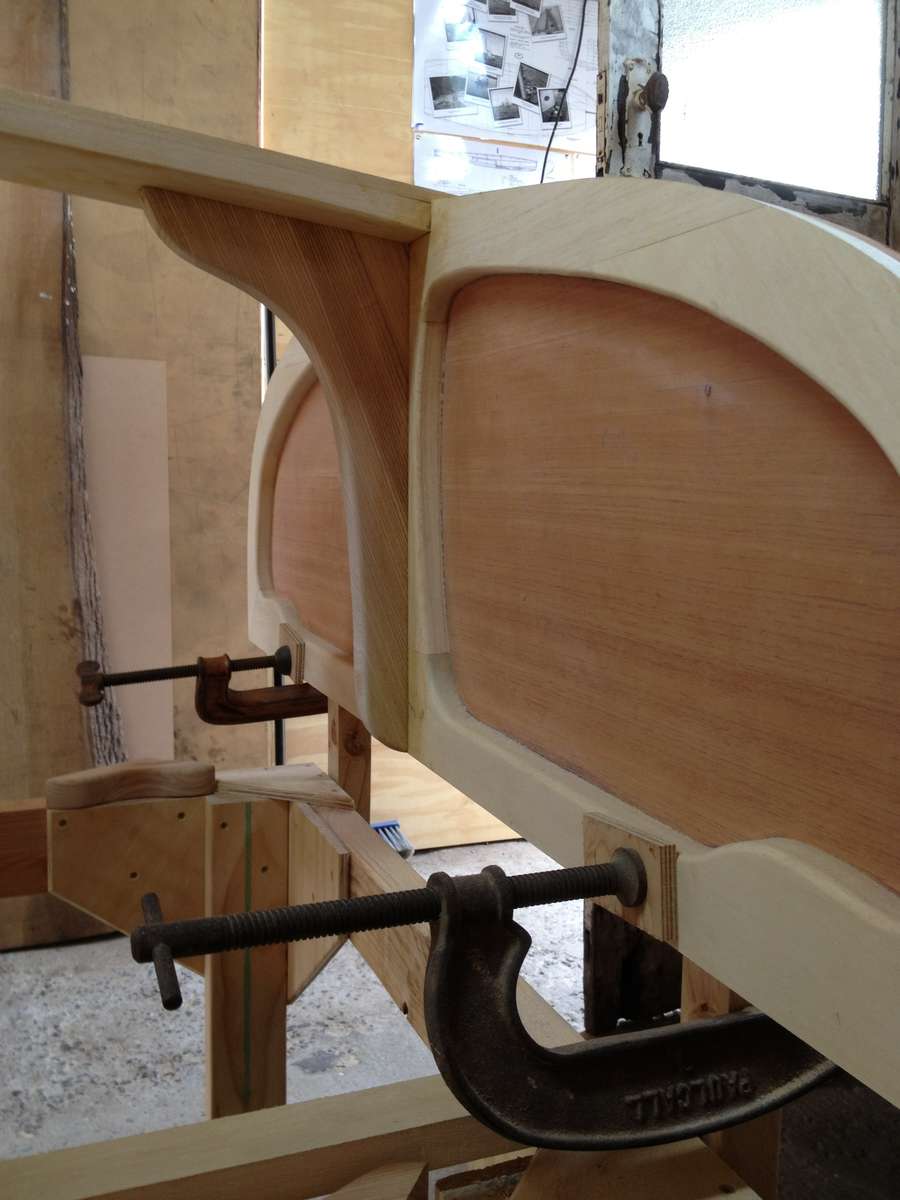 The stern of MYRA TOO coming together. Photo by Penny Hyde 2013