In the 1890s, young photographer Samuel (Sam) John Hood developed an excellent strategy for a lucrative business in ship and crew portraits. He would hitch a ride on a tugboat to photograph sailing vessels ready to enter Sydney Harbour and, with his portfolio under his arm, would then board the ship and convince the captain to let him sell photographs to the crew – with the promise of a similar oil painting for the captain or a free portrait. With the captain’s assent, Hood’s bill for photographs was deducted from the crew’s wages, so they didn’t have to ‘pay’ a penny upfront. 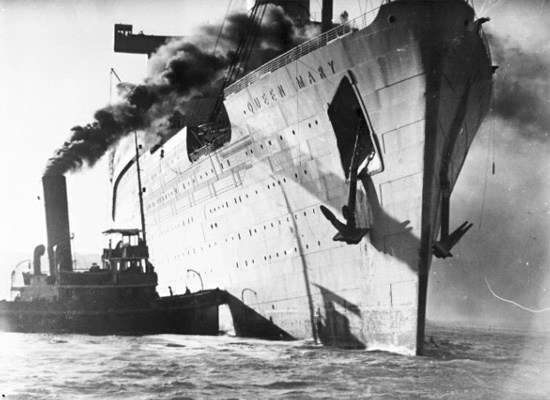 He would then rush back to his city studio or his home studios in Balmain and, using a trick of the trade, paint the sails (based on the particular ship’s rigging plan) onto the photograph of the vessel, which he would then rephotograph and present to the crew as postcards. Apparently, few sailors saw though his retouching techniques (often also applied by skilled marine artists such as Walter Barratt, Reginald Arthur Borstel, George Frederick Gregory and John Allcot).

The turn of the 20th century marked the end of the sailing ship era and the growing dominance of steam vessels. This had implications for Hood’s business, as steamship crews were less inclined to request photographs of their vessels.

… By the 1920s, Hood had moved from ship postcards to the newspapers’ social and sport pages. With an excellent eye for everyday subjects, he was a leader in the early development of photojournalism.

The entire collection of the Samuel J Hood studio is enormous – of about 33,000 images, the museum holds more than 9,000, primarily related to maritime scenes. The industry around, and activity on, Sydney Harbour during the busy early to mid-20th century remained some of Hood’s favourite subjects. His iconic photograph of the troopship Queen Mary in 1940 (pictured) captures the drama of manoeuvring a large vessel on the harbour.

An excerpt from 100 Stories from the Australian National Maritime Museum. Available as a free eBook for iPad from the iBookstore or hard copy versions available for purchase through our museum store.