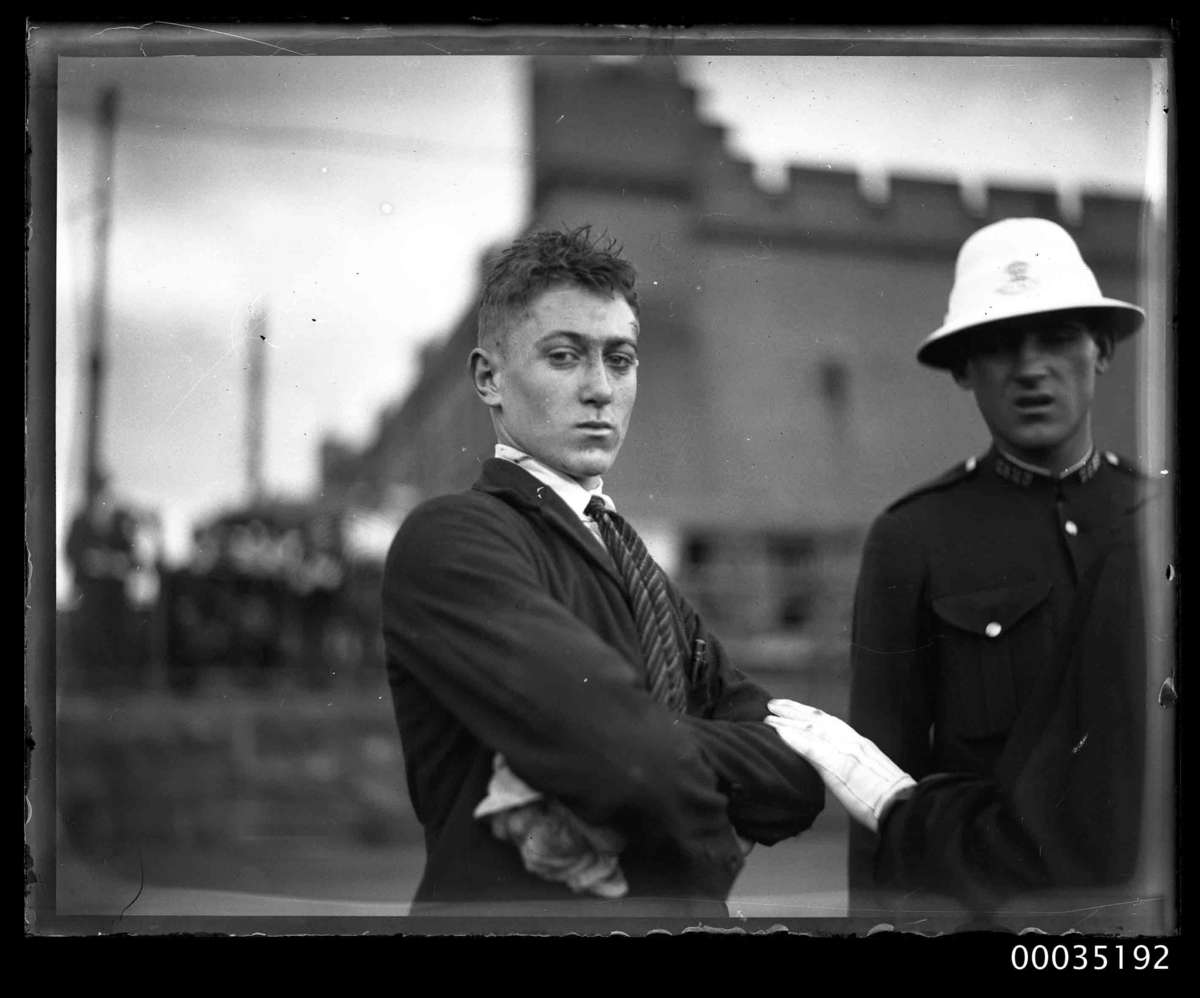 On 3 November 1927, the Union Steamship Company’s RMS Tahiti collided with the Watsons Bay ferry Greycliffe off Bradley’s Head. It became known as Sydney’s worst maritime disaster and etched itself into the minds of those who witnessed scenes of ‘indescribable horror’ on the harbour on that sunny afternoon.

At 4:30pm Greycliffe was on its way to Vaucluse when it was struck. It must have been a paralysing prospect as passengers looked up to see the bow of Tahiti towering above them. There was a ‘ghastly chorus’ of screams and cries as the liner rammed into the ferry. Dwarfed in comparison, it did not take long until the ferry was split in two before it finally disappeared into the murky depths. Greycliffe sunk within three minutes of impact. One eye witness report from a Tahiti passenger vividly described the moment it struck:

…like a huge knife, the bow of the Tahiti cut through the middle of the Greycliffe, shearing through the steelwork and wooden superstructure as though it were so much matchwood…In a moment one half of the vessel had disappeared from view, and the other immediately became alive with scrambling terrified people.
The Brisbane Courier, 4 Nov 1927, p. 15 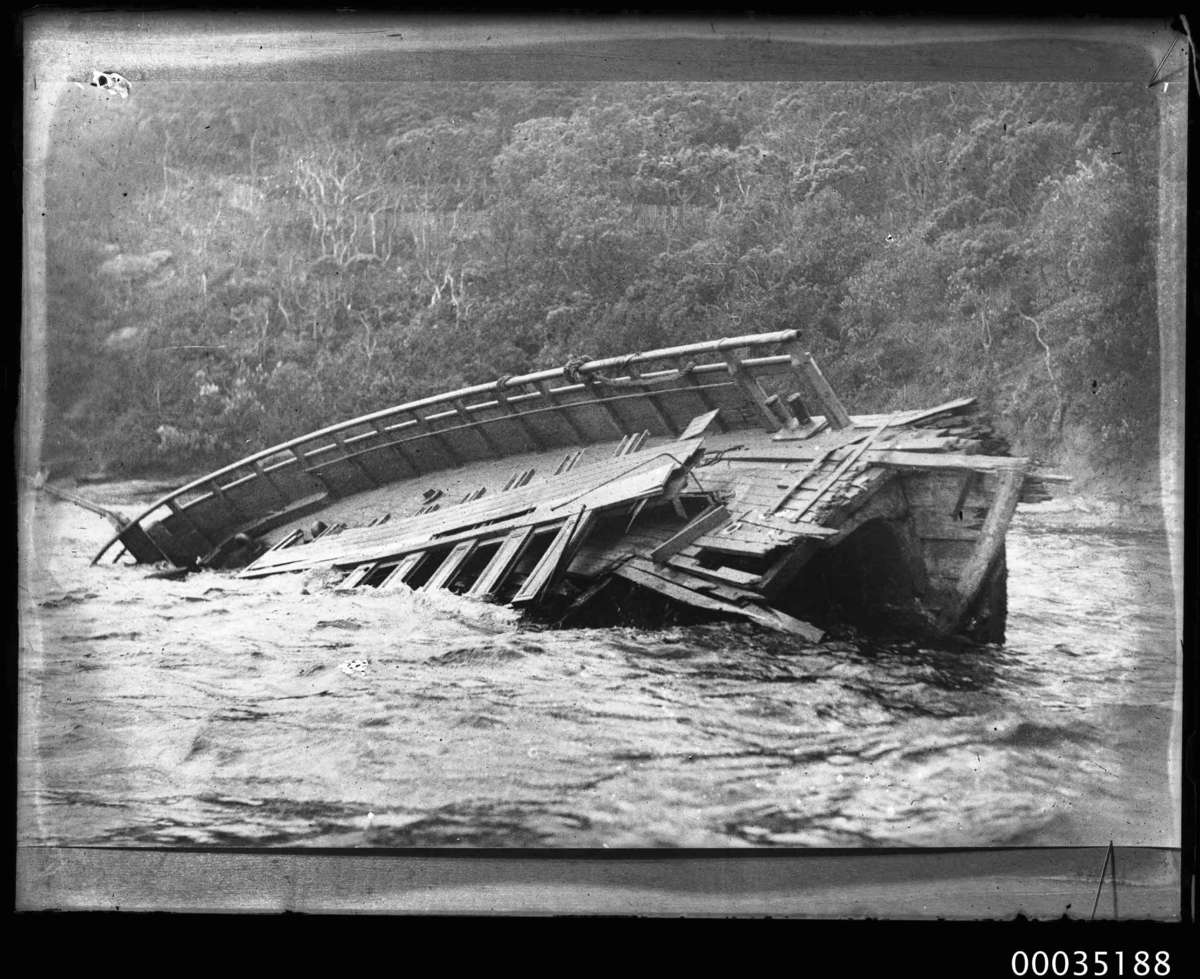 Another passenger on board the liner described the moment the ferry was turned over and split in half:

…it was all over before we knew anything about it. We heard the siren, and when the ship trembled slightly I remarked to a friend, ‘they are putting the brakes on.’ That was the last time I laughed. Looking over the side I could see the ferry slowly turn over, and then, to my horror, she split in halves…It was terrible to hear the women and children screaming. I could not look any longer, and in a minute or two we had left the wreckage and its struggling occupants behind.
The Brisbane Courier, 4 Nov 1927, p. 15 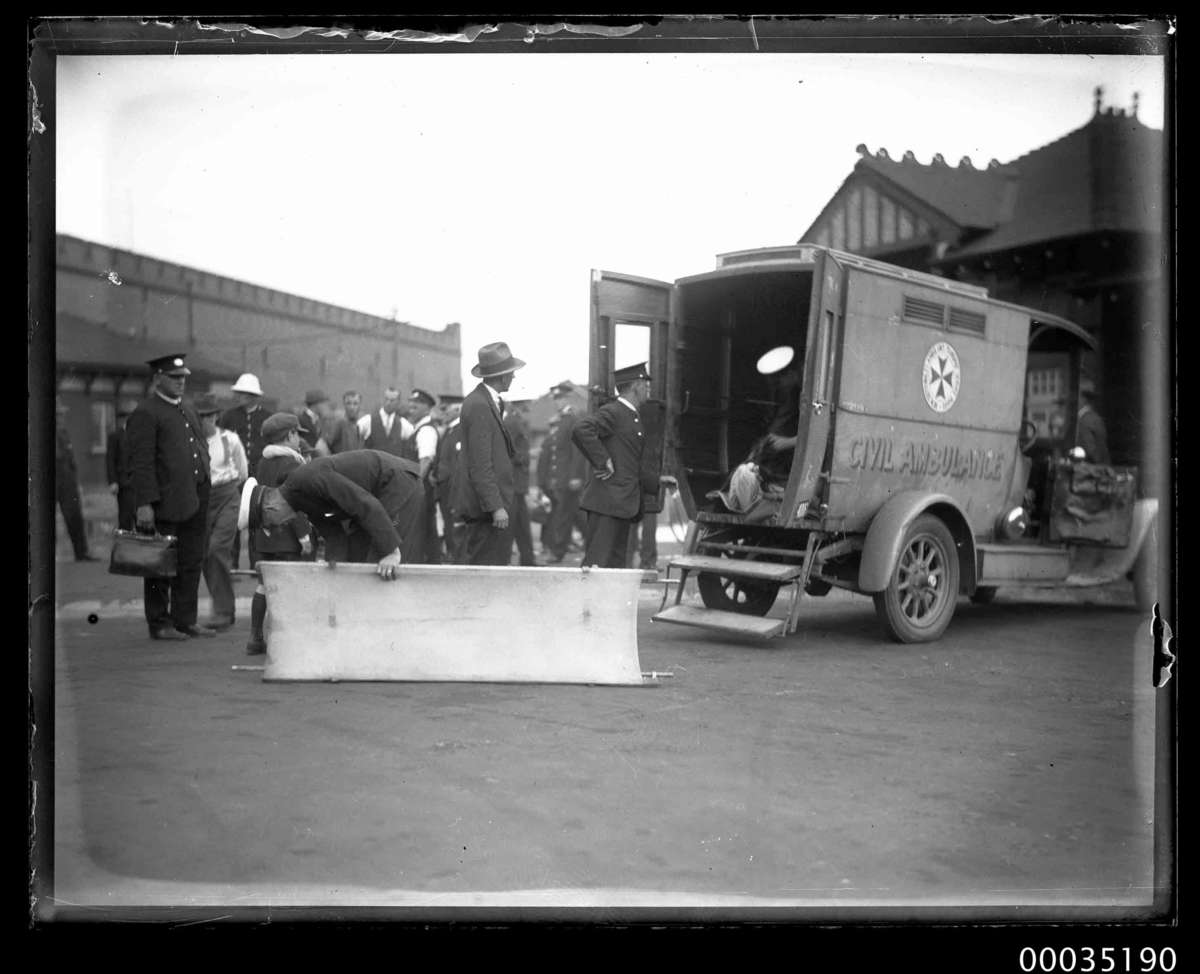 Those that occupied the lower compartments of the ferry struggled desperately, realising that unless they broke through the windows or gangway openings before the vessel sunk, they would drown. Personal items and bits of timber littered the harbour as the scene of ‘unutterable desolation’ unfolded. The open space in front of the Fort Macquarie Tram Depot at the Man o’ War steps, where the Sydney Opera House now stands, was turned into a temporary casualty station. For nearly an hour, ambulance vehicles were travelling between the site and Sydney Hospital. Some victims were revived on the pathways at the steps; others were conveyed straight to the hospital with wounds of varying severity.

Passengers of the Greycliffe were on the ferry that day for a range of reasons. Many of them were children who were returning home from school, the ferry had often been called the ‘School Boat’. Some were returning home from work in the dockyards, or the hospitals. Other passengers were on their way for a day out at Watsons Bay with the family. John Corby was one such passenger who had his wife Mary and six year old daughter Noreen with him. He was interviewed onshore and relayed the tragic fate of his family:

Trembling violently, and with bleeding face, the first words Mr. Corby uttered when he walked unsteadily off the vessel to the wharf were “Oh, God: my poor wife and child. They have gone.”
The Sydney Morning Herald, 4 Nov 1927, p. 14

The next day, Mary was found drowned along with her daughter, she had been holding her in her arms.

Sydney photographer Samuel J Hood was at Fort Macquarie and Bradleys Head to witness the chaos as it unfolded, and the grisly task of recovering bodies trapped in the wreck. Harbour Trust divers Thomas Carr and William Harris worked in the days that followed to find the missing. On one occasion, Harris was tested when he found the body of 15 year old schoolgirl, Betty Sharp:

“Just before finishing work on Friday,” he said, “I decided to have a look around a portion of the wreck which had not hitherto been explored.
“You can imagine my feelings,” continued Diver Harris with emotion, “when the figure of the little girl, standing upright, and with outstretched arms, loomed up before me. Her clothes were torn to shreds. Further investigation revealed that one of the feet of the little girl had become jammed between a mass of twisted steel rods…
The Sydney Morning Herald, 14 Nov 1927, p. 11 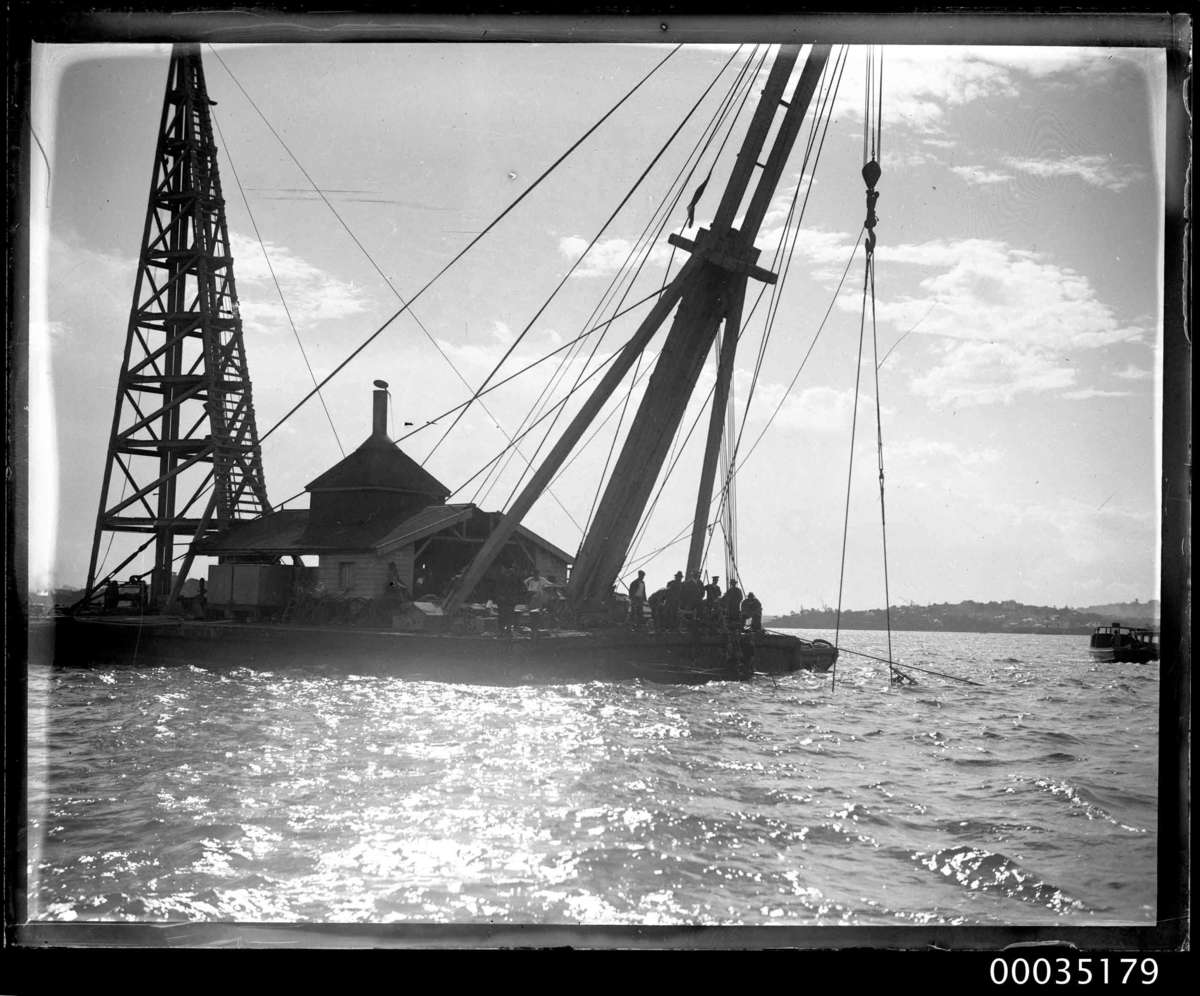 Salvage workers from William Waugh Ltd of Balmain used a sheerlegs crane more powerful than that of the Harbour Trust’s to lift the vessel from the water. Hood captured these scenes and one of his photographs was published in The Argus.

One of the most striking photographs Hood took was the one of a man carrying a young boy in his arms. We have not been able to identify them so far; however, the photograph illustrates the tragedy in a compelling way. It stands next to the unidentified injured man as a stark reminder of what happened that day in Sydney Harbour, when 40 people lost their lives and a whole city was brought to a standstill. 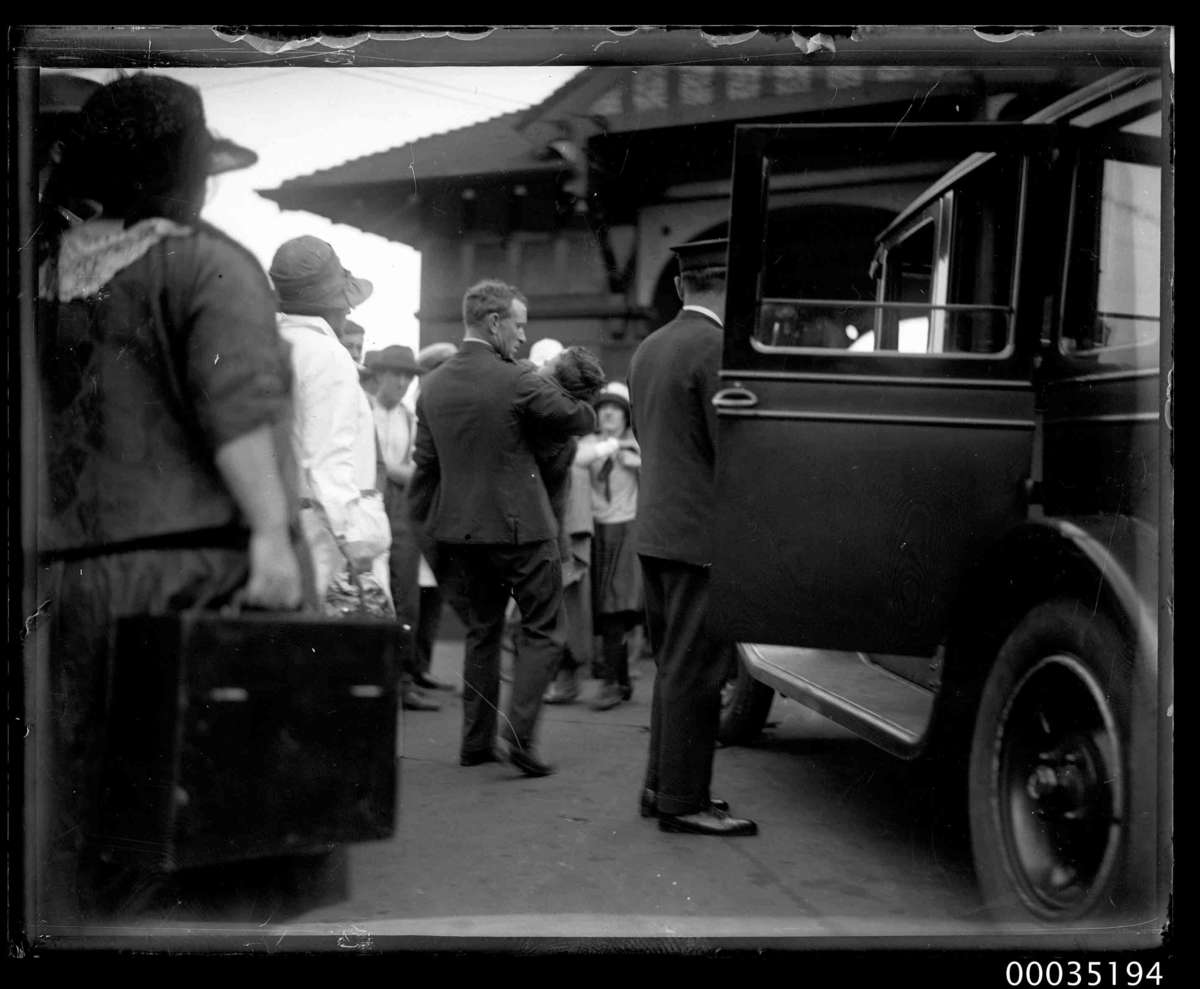 Only three years after the disaster, Tahiti sank southwest of the Tongan Islands.