With all the rain in Sydney recently, you could be forgiven for forgetting what blue sky looks like. But for the Lu family, who arrived in Australia in 1977 on the Vietnamese refugee boat Tu Do, the colour sky blue is forever etched in their memories as the colour of freedom.

After the end of the Vietnam War in 1975, South Vietnamese businessman Tan Thanh Lu pooled resources with friends and built a fishing boat, Tu Do (meaning Freedom), to escape Communist Vietnam. Mr Lu painted the boat sky blue to blend into the ocean and to evade authorities and the notorious Thai pirates who preyed on boat people.

On 21 November 1977, two months after leaving Vietnam, Tu Do made landfall in Darwin with 31 exhausted passengers, including Mr Lu’s wife and three young children. Mr Lu and his crew had navigated more than 6,000 kilometres using a simple compass and a map torn from the lid of a school desk.

The Lu family were transferred to Wacol Migrant Hostel in Queensland and eventually settled in Brisbane. Mr Lu sold Tu Do in 1978 and it passed through several owners before the Australian National Maritime Museum acquired it in 1990 to illustrate one of the most significant themes in Australia’s immigration history – the arrival of seaborne refugees and asylum seekers. 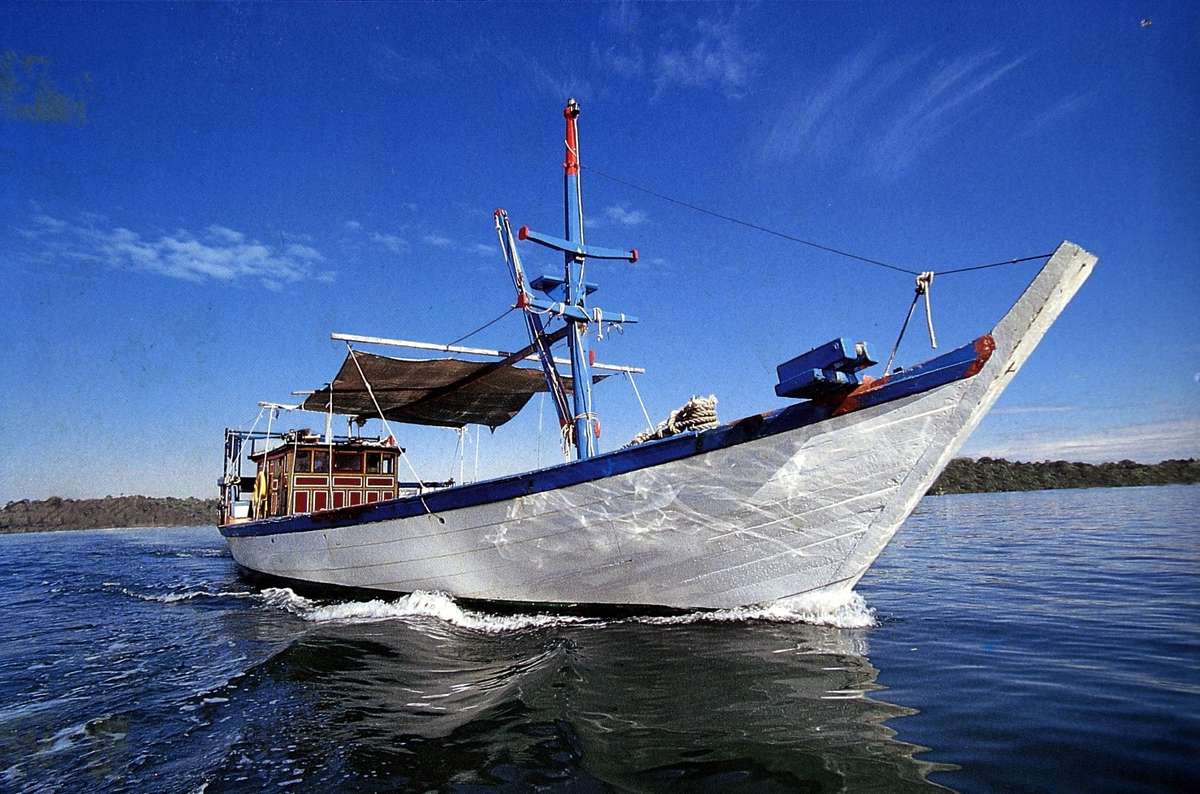 Tu Do arriving at the museum in 1990 with a very different colour scheme
Photographer: Jenni Carter, ANMM

Since arriving in Australia Tu Do had been painted many times by its subsequent owners. In 2003 the museum commenced a project to restore Tu Do to its 1977 appearance. Museum conservators took paint scrapes and traced back the chronology to the original colour scheme.

Using these paint scrapes and information gleaned from oral history interviews with the Lu family, we were able to construct a detailed paint scheme for Tu Do. Black and white photographs taken by Australian photojournalist Michael Jensen showing Tu Do arriving in 1977 were helpful in determining the different paint tones, while research into traditional Vietnamese fishing boats provided information about common highlighting techniques. Once the Lu family identified the correct blue colour from paint charts we were ready to commence painting. 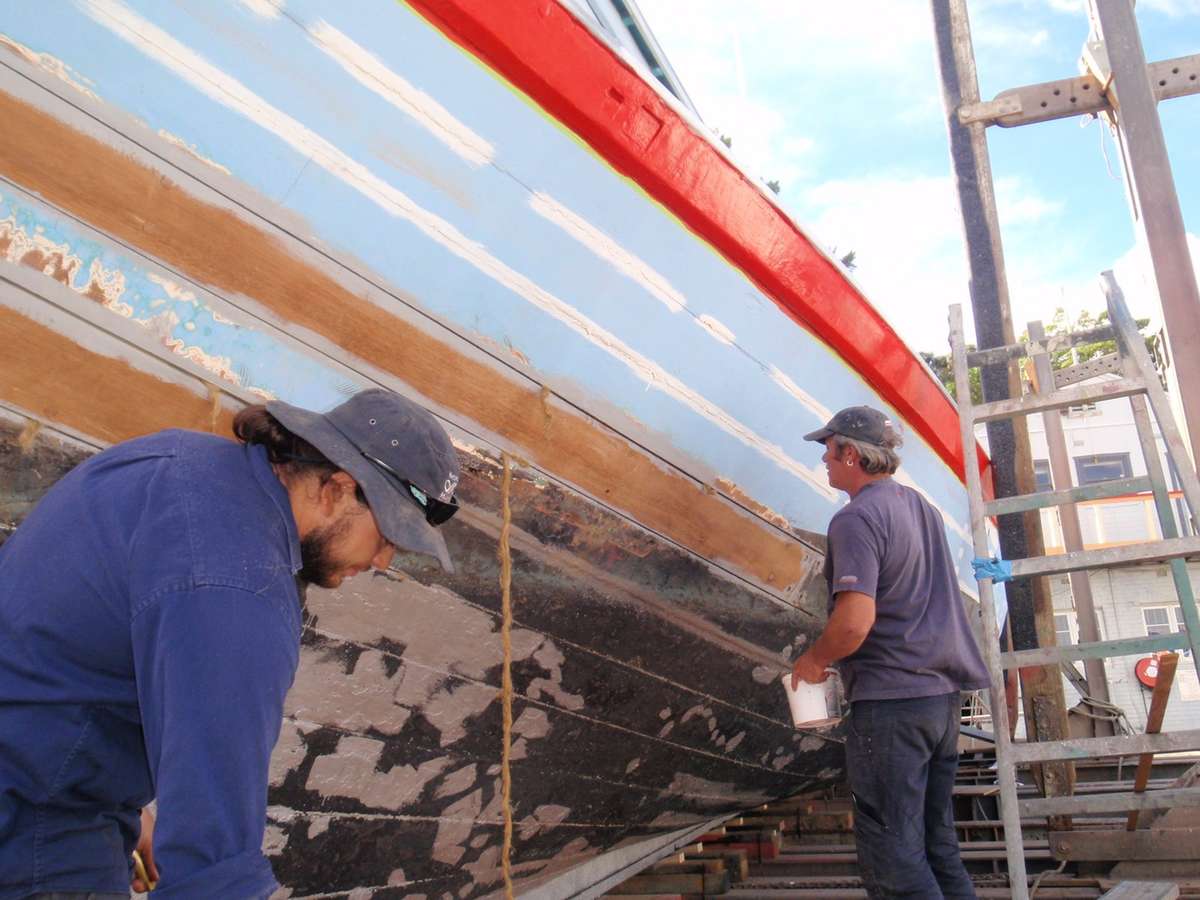 Painting the hull – notice the different colours that have been applied over the years
Photographer: Phil McKendrick, ANMM

Tu Do was slipped in North Sydney in April and its hull was painted blue with red below the waterline. The vessel registration number VNKG1062ADC was painted on the bow before Tu Do returned to the museum’s floating vessel marina in May, where staff have been finishing the paint work on the deck, cabin and mast. 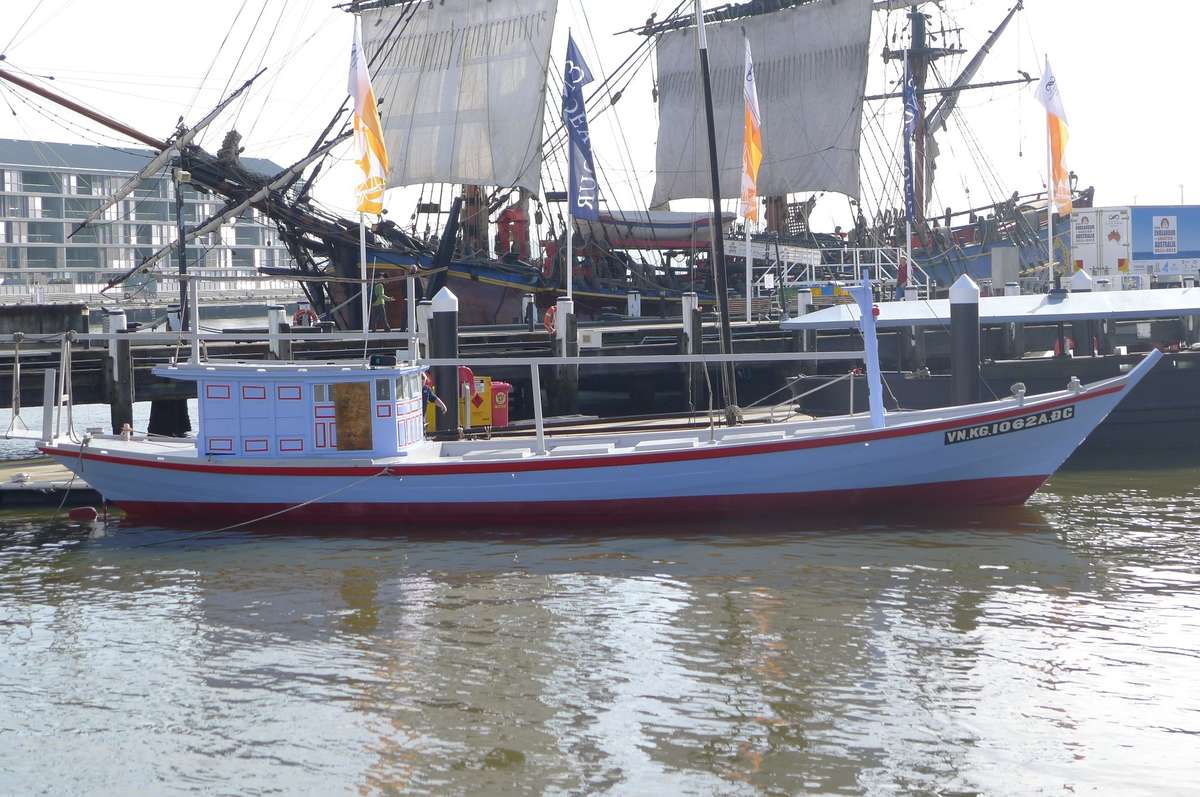 Nearly 35 years after Tu Do sailed into Darwin Harbour, the museum has finally restored Tu Do to the original colour scheme applied by Mr Lu. The vessel will be displayed at the performance platform in front of the museum to mark Refugee Week, which will be celebrated around Australia from 17-23 June. The theme for Refugee Week 2012 is Restoring Hope. It also marks a significant milestone in the museum’s work to restore our fishing boat called Freedom.

View all posts by Nicole and Penny→
Posted in: Conservation , From the collection , Vessels , Tu Do , Migration
↑