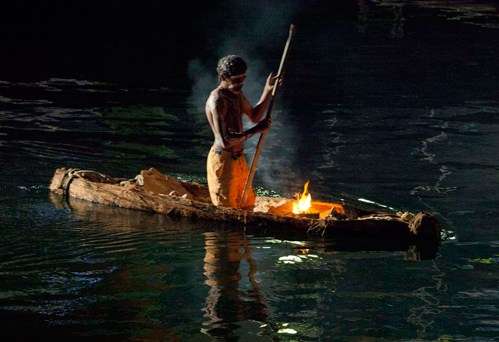 It is very difficult to sum up in a short post all of the ideas, discussions and presentations that  we have seen today, the last day of the Nawi conference on Indigenous watercraft here at the museum. The second day of Nawi was kicked off with a presentation by Ian McNiven, Thomas Chandler and Michael Lim. Their project consists of virtual 3D modelling of Torres Strait canoes.

Australian National Maritime Museum curator, David Payne, displayed the painstaking work he has done to map canoe distribution across Australia. From rolled-bark canoes in Tasmania, to the sheet-bark yuki style used in the Murrumbidgee area, David demonstrated the breadth of his research and passion for nawi.

Bryce Barker spoke after morning tea and talked of early references in literature of Aboriginal watercraft that used words such as ‘crude’, ‘primitive’ and ‘simplicity’. David went on to disprove this however, with his talk on the complex ways in which watercraft was used along the tropical north Queensland coast. He also noted, importantly, that Aboriginal people were voyaging to the Percy Islands at least 2800 years ago making this is some of the earliest use of watercraft in human history.

Therese Chelepy-Roberts of the Queensland Museum presented on a project to build a traditional ‘walpa’ craft in conjunction with the community of Mornington Island. Therese noted at the conclusion of her talk that this conference, this gathering, was ‘bringing back the memories of the old people’ and helping to revive and thus preserve traditional practices.

Tony Brown of the Tasmanian Museum and Art Gallery talked of this institution’s small collection of canoes and the problem of provenance. Tony posed an interesting question – how to classify a canoe that is the outcome of a community project. Is it an artefact? A replica? Or perhaps a prop?

These were questions that were also addressed by Moya Smith of the WA Museum. Moya noted through her experience working with Indigenous communities, that items generated during projects to revive cultural traditions are not considered replicas by their creators, as the knowledge and the significance are still part of an old but living and growing culture.

Key messages from today included: the importance of supporting community initiatives designed to display Indigenous culture and bringing Aboriginal art and traditions to communities to bridge cross-cultural divides. School student Georgette Rose provided inspiring words to which the audience erupted in cheers and applause: ‘My pop once told me, “Girls can do anything and don’t let anyone ever tell you they can’t”.’ Fred Kelly also noted the importance of educating Aboriginal boys about respect and instilling ‘knowledge and cultural protocols’ that will ensure the survival of Aboriginal culture for many years to come.

There has been almost too much to contain in a two-day conference – and certainly too much for a short blog post. Hopefully this event will be the catalyst for further collaborative research and a wider promotion of this important historical topic.