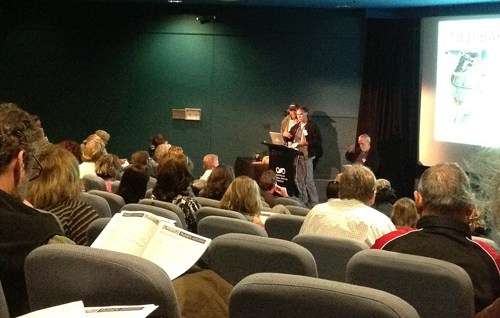 At the close of a fantastic first day of the Nawi conference here at the Australian National Maritime Museum, we thought we would share some impressions and snippets from the event.

While there are a wide variety of people, ways of teaching, storytelling and of sharing information here at this event, there are some vital common threads emerging through the presentations of our speakers.

Alison Page, Executive Officer of the Saltwater Freshwater Arts Alliance, opened today’s proceedings with a heartfelt speech about the importance of a revival of traditional cultural practices. She articulated that the passing on of knowledge and traditions to the next generation is what provides them with identity, strength, confidence and a sense of their place in the world.

During morning tea John Moriarty gave an inspiring talk, as photographs of his childhood were projected onto the wall behind him. John spoke of how he was taken from his family and his home as a child, but that he treasures the early years of his life spent in the bush, learning traditional practices such as canoe building that gave him a sense of identity as an Aboriginal person. He too reiterated the importance of passing this knowledge through the generations before it is lost.

Aboriginal artist, Jonathan Jones, discussed the centrality of traditional watercraft within his artwork and how it translates beyond two-dimensional works, and into the realm of sculpture. He plans to travel down the Murrumbidgee River to learn more about watercraft and the surrounding culture and lands.

Daryl Wesley’s presentation brought an archaeological perspective to the conference with his examination of maritime images in the rock art of Arnhem Land. He also provided some information on the different chronological frameworks used to assist in dating such as changes of style in the art and – of all things – beeswax!

As an example of intergenerational knowledge sharing in action, Cameron Cope and Steaphan Paton presented on their arts collaboration ‘Boorun’s Canoe’. This project followed Steaphan and his family as his grandfather taught them the traditional art of building a canoe. Steaphan stressed the importance of the canoe as transport, as a way of life and as an icon in the origin story of the Gunaikurnai people. The passing of this heritage from one generation to the next continues the past into the future, so that the story never ends. Revitalising, reawakening and renewing. 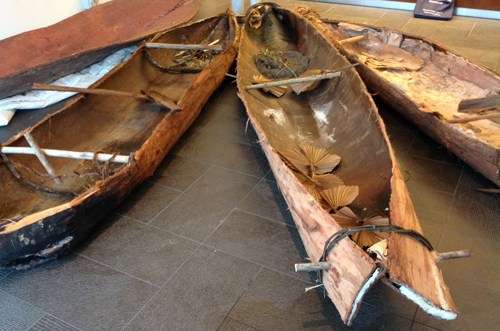 Canoe making presentations dominated the third session and the day closed off with a canoe making demonstration and a dinner on the rooftop terrace of Pyrmont Bridge Hotel.

For more information on these talks, and the many other fantastic speakers who attended the first day please see our website.