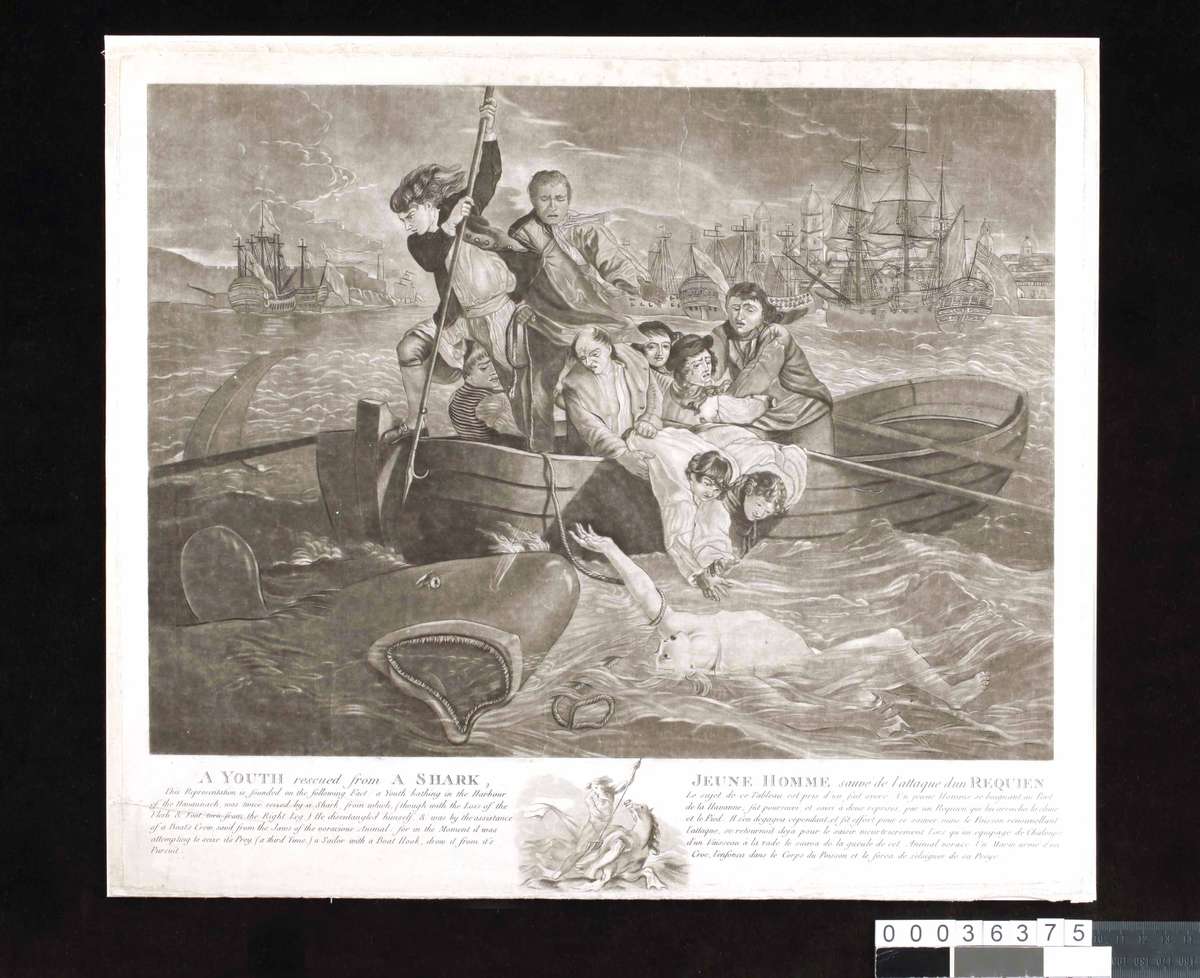 Art has the capacity to evoke a range of emotions from the viewer, whether it be religious fervour, nostalgia, romance or even horror. Valentine Green’s engraving, Youth rescued from a Shark (1779), is designed to portray what was seen as, and to a large extent is still considered, one of the most feared aspects of the ocean – a shark attack.

In 1749, the fourteen-year-old English sailor, Brook Watson, was swimming in Havana Harbour, Cuba when he was attacked by a shark. Watson had been serving on board an American merchant ship before he decided to take that fateful swim. His shipmates spotted him struggling against the shark and rowed to his aid. Watson managed to disentangle himself; however the shark had severed his right foot at the ankle and he later had his leg amputated just below the knee.

This image captures the moment just after Watson loses his right foot and before his crew mates managed to hoist him into the boat. The engraving is a copy of the 1778 oil painting by American artist John Singleton Copley. Almost 30 years after the attack, Watson, then a successful businessman, commissioned the well-known portraitist to depict the event. Immortalised in paint, Watson and the Shark caused a sensation when it was exhibited at London’s Royal Academy in the same year. A London newspaper provided a detailed description of the attack, though it is believed that Watson wrote it himself. It is dramatic and stirring in its tone concluding, ‘after suffering an amputation of the limb…the youth received a perfect cure in about three months.’

While Watson’s motivations behind the commission are unclear, six years after the painting shocked London viewers, he entered politics. An entry into this sphere brought with it the usual drawbacks of politically-motivated derisive commentary from his peers. The Rolliad (1812), a British satirical publication designed to poke fun at politicians, penned this scathing critique of Watson and the story that made him famous:

‘“One moment’s time might I presume to beg?”
Cries modest Watson, on his wooden leg;
That leg, in which such wondrous art is shown,
It almost seems to serve him like his own;
Oh! had the monster, who for breakfast ate
That luckless limb, his nobler noddle met,
The best of workmen, nor the best of wood,
Had scarce supplied him with a head so good.’

Worlds away from the shark attack these cutting remarks were attacks of a different kind, designed to thwart Watson’s political ambitions. What it demonstrates, however, is how Watson’s public persona became synonymous with the terrifying tale of his struggle against the shark. The fact that the painting was reproduced in this engraving also lends itself to this idea, as it would have been printed and distributed for buyers interested in obtaining a copy of it. Below the engraving is a small blurb in English and French detailing the ‘Loss of the Flesh & Foot, torn from the Right Leg’ and Watson being ‘sav’d from the Jaws of the voracious Animal’.

Green’s engraving demonstrates the popularity of Copley’s painting, but it also hints at the range of possibilities for what it may have represented for its viewers. An orphan from the age of six, perhaps Watson commissioned the work out of more than a self-indulgent desire to record this significant chapter in his life. In this light, the painting acts as an 18th century parable of survival in the face of adversity. Watson’s will, dated 12 August 1803, echoes this sentiment as he concluded he would donate the painting to Christ’s Hospital in London. In praise of their charitable efforts for disadvantaged children, he hoped it would stand as a ‘most usefull [sic] Lesson to Youth.’