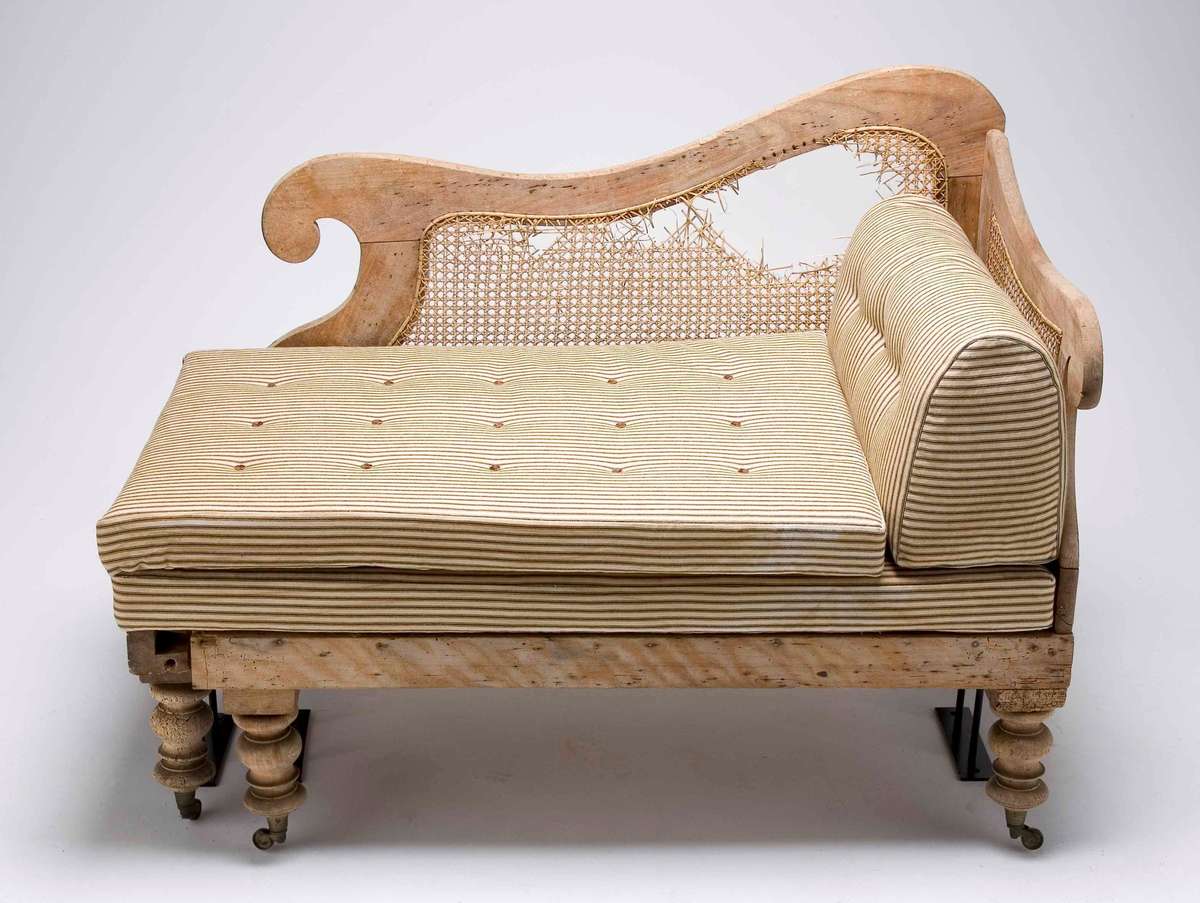 This cabin bed would have been used by a well-to-do passenger travelling to Australia during the 19th century. Many wealthy passengers would supply their own furniture for the journey and fit out their own cabin. Conditions on board required the furniture to be practical, light, collapsible but also elegant and comfortable.

Campaign furniture or knockdown furniture, of which this cabin bed is a perfect example, was originally designed to be easily assembled and quickly folded up for use by travelling armies, surveyors and explorers. Such pieces were designed to look very much like regular Georgian household furniture and were constructed by some of the most eminent cabinetmakers of the day. As the name suggests, knockdown furniture was built specifically for travelling and could be quickly folded or disassembled without the use of nails, tacks or tools.

Not only did this type of furniture need to be highly portable, lightweight and exceptionally durable but it also needed to be comfortable and attractive to ensure the military, professional and commercial traveller all the luxuries of home while travelling to and around distant lands.

As the British Empire expanded, the demand for this style of furniture increased. Gentlemen officers, surveyors, explorers and traders in the Georgian and later the Victorian period desired to replicate their permanent homes while overseas and would go to great expense to maintain their station in life. It was precisely because issues of class and respectability were taken so seriously that makers of this type of furniture were able to flourish. By the early 1800s established British furniture companies such as Thomas Shearer, George Hepplewhite, Thomas Sheraton, Thomas Chippendale, William Ince and John Mayhew were designing a number of portable, collapsible furniture pieces including stools, trunks, wardrobes, baths, tables, chairs and beds along with all the accoutrement suitable for a gentleman including ice chests, wine coolers, rifle and cutlass holders, portable hangers and boot and shoe racks. These designers saw primarily mechanical, not aesthetic, differences between knockdown and regular household furniture and could and did design or convert any household item into a suitable portable unit.

Such furniture lent itself perfectly to sea travel, which because of the small size of even the largest 19th century ship’s cabins (which usually came unfurnished) and the rigours of a four to six month voyage, was extremely harsh on ordinary domestic household furniture. The primary item of furniture for any cabin passenger in the 19th century was some form of bed. Because of the confined spaces found in such cabins – the largest cabins available were generally no more than three metres square – ship’s beds were made so that they could be shortened during the day and used as a chair or settee and extended at night into full-sized beds. Hanley Northcote in ‘Colonial Furniture of New Zealand’ (1971) notes several examples of single ship cabin beds in the collection of the Canterbury Museum which were brought out to New Zealand onboard the Charlotte Jane in 1850. 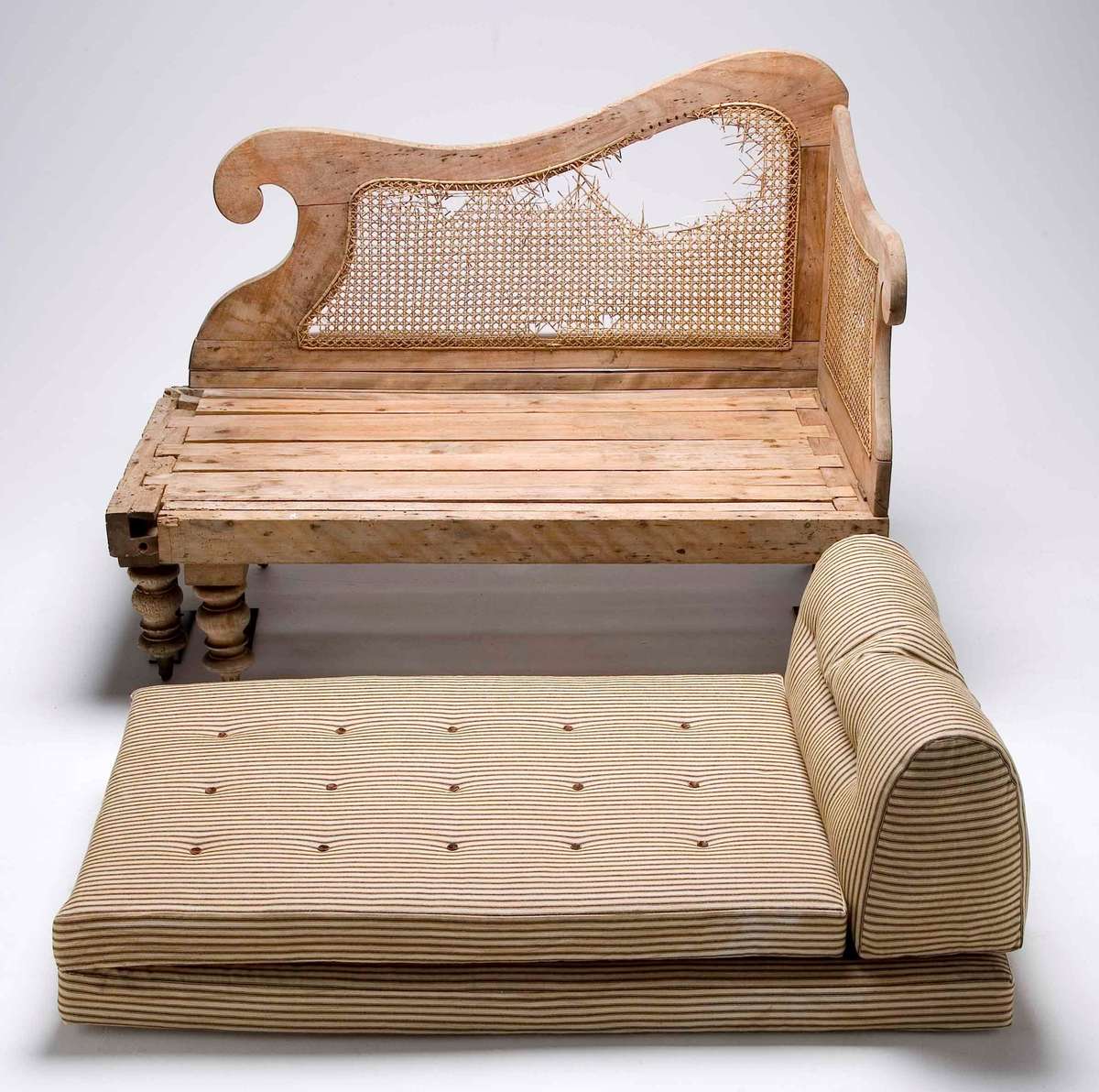 Various furniture makers and designers also noted the ease with which their furniture could be used on board ship. Morgan and Sanders, cabin outfitters to Lord Nelson, in an 1810 trade card illustrate a range of portable army and navy equipage, including a sofa bed ‘contrived on purpose for Captains Cabins, & Ladies or Gentlemen going to the East or West Indies’, which formed ‘an elegant Sofa, and maybe transformed with great ease into a complete Four Post Bed, with Bedding Furniture, &c’. There was also a chair bed ‘forming a handsome easy Chair, & is with great ease transformed into a Tent Bed, with Furniture & Bedding complete’, and finally “elegant Four Post & Tent Bedsteads, with Lath or Sacking bottoms” that could be assembled or taken down in a few minutes without tools.

Noted campaign furniture designer Pocock claimed in one of his advertisements that his patent sofa beds ‘made comfortable and convenient Sofa and Bed, suitable either for Camp or Barracks, or on Board a Ship, or even for an elegant Drawing-Room; and yet are very portable by folding into a very small Compass for the Convenience of Carriage’. He added that ‘they have been highly approved by distinguished Officers in the Army and Navy’.

This is a rare representation of an early cabin bed and an evocative example of how people of financial independence travelled to Australia in the 1850s, in some degree of comfort.