Object of the Week: Chair made from wreckage of the Dunbar

In late May 1857 the 1167-ton wooden three-masted sailing ship Dunbar departed London for its second voyage to Australia, carrying at least 63 passengers, 59 crew and a substantial cargo. After a relatively fast voyage, the vessel approached Port Jackson on the night of 20 August 1857, in a rising south easterly gale and bad visibility. The Macquarie Light near South Head could be seen between squalls, however the night was very dark and the land almost invisible. Shortly before midnight Captain Green estimated the ship was six miles away from the harbour’s entrance and ordered the vessel on, keeping the Macquarie Light on the port bow.

Shortly afterwards the urgent cry of ‘Breakers Ahead’ was heard from the Second Mate in the forepeak. Captain Green, confused by the squalls, and believing the vessel had sailed too far towards North Head mistakenly ordered the helm hard to port. In doing so the vessel sailed closer towards the cliffs instead of the entrance to the Heads. Dunbar struck the cliffs just south of the Signal Station at South Head – midway between the lighthouse and The Gap and within a few minutes the ship had begun to break up. The only person to survive the wreck was a young seaman called James Johnson.

Dawn gradually unveiled the enormity of the event to the community of Sydney, and large crowds watched the rescue of the single survivor, the recovery of the bodies and the salvage of some of the cargo. For days afterwards the newspapers were filled with graphic descriptions of the wreck and the public interest in the spectacle.

Many of the victims of the Dunbar were buried at Camperdown Cemetery in what is now present day Newtown. The funeral procession attracted an estimated 20,000 people who lined George Street. Banks and offices closed, every ship in the harbour flew their ensigns at half-mast and minute guns were fired as the seven hearses and 100 carriages went past.

The impact of the Dunbar disaster of 1857 is hard to imagine in these days of safe and efficient air and sea travel. For those living in the emerging colony of Sydney during the 1850s the tragedy had a lasting emotional effect. To commemorate the loss of the ship and its passengers and crew, numerous mementoes and souvenirs of the event were published, printed and manufactured in Sydney in late 1857. 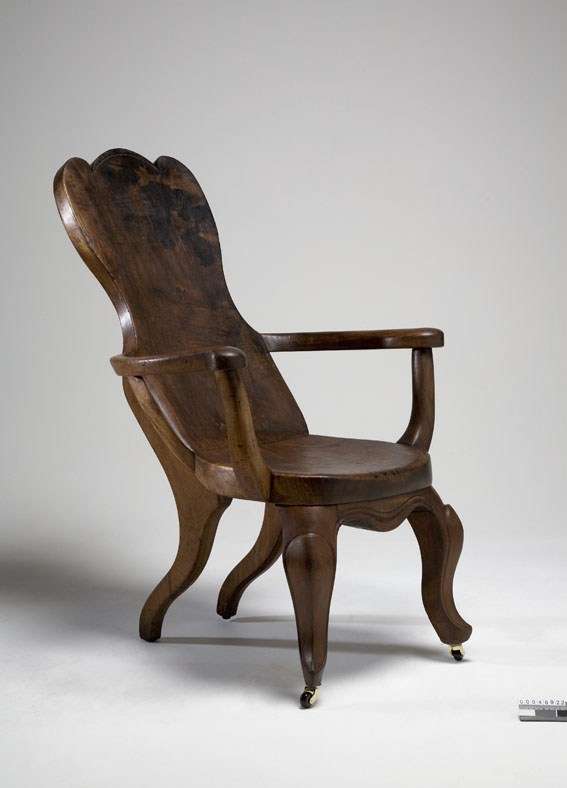 Chair made from timber from the Dunbar wreckage, ANMM Collection

This chair is believed to have been constructed out of timber recovered from Bondi following the wreck of the Dunbar. The chair’s design indicates that it was carved from a single piece of timber (possibly from the keel, a breast hook or counter timber), and was not a commercially manufactured piece of cabin furniture or carried as cargo on the vessel.

The effect of the Dunbar wreck on Sydney is evident by the number of letters to paper editors, lithographs, paintings, poems, narratives and accounts which were published just days after the event. These publications were sold in their thousands, and various examples are held in the Australian National Maritime Museum’s collection which you can browse on-line.