‘I have to take a taxi to avoid losing myself in London, but I can find my way to Australia’.

Australian adventurer, author and filmmaker Francis Edwin Birtles (1881-1941) made this remark two days before departing on what would become his most famous adventure – driving from London, England to Melbourne, Australia in his 1925 Bean racing car known as the ‘Sundowner’.

A veteran overlander, Birtles had cycled around Australia twice and crossed the continent seven times between 1907 and 1912, completed the first west – east crossing of Australia in a car in 1912, and set records driving from Melbourne to Darwin, and Darwin to Sydney in 1926. However it was his nine month 26,000km part-solo journey from London to Melbourne which is regarded by many as his greatest achievement, and one of the most remarkable journeys ever completed in a motor car.

Birtles’s first attempt to drive from England to Australia was in February 1927, in an experimental vehicle the ‘Imperial Six’, with Australian journalist M H Ellis, and Queenslander E W Knowles. The planned route was to cross the English Channel to Boulogne and drive through Europe and Asia towards Singapore, then to Port Darwin, Adelaide, Melbourne, finishing in Sydney. In early August after ‘considerable hardship’ the voyage was abandoned at Delhi, and the team returned to London.

Birtles’s second attempt saw him use the ‘Sundowner’ – his own 14 HP Bean racing car which he drove extensively throughout Australia. On 19 October 1927, Birtles departed London once again, this time alone and with a new route in mind which would take him through Europe, Syria, Iraq, the Persian and Baluchistan deserts, crossing the north-western frontier into India and Burma, then onto Singapore where his car would be shipped to Darwin, and ending his journey in Melbourne.

A young Canadian man by the name of P E Stollery joined Birtles in Calcutta, and by early June the pair had arrived in Singapore, after a ferry crossing from Pakokku to Nyaungu (Burma), and a brief voyage by ship from Mergui (Burma) to Penang (Malaysia) due to heavy rain. From Singapore Birtles, Stollery and the ‘Sundowner’ boarded the oil freighter UNDA and arrived in Darwin on 10 June 1928. From Darwin the pair proceeded east through Queensland to Longreach, and then southward along the east coast to Brisbane, arriving in Sydney on 16 July. 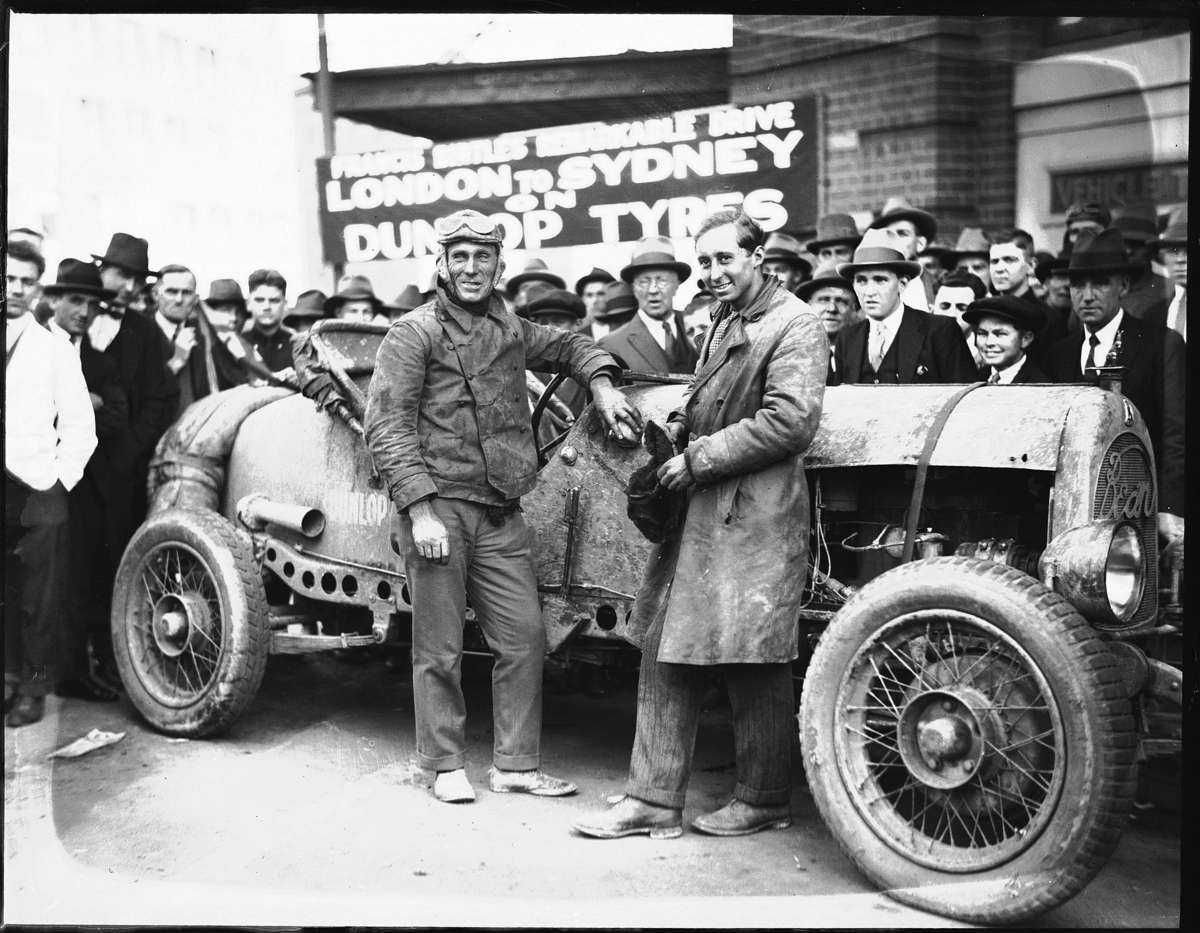 Upon their arrival they ‘drove straight to the head office of the Dunlop Rubber Co Ltd, in Wentworth Avenue, where a crowd gathered, and a brief welcome was tendered to the overlanders’ (‘Francis Birtles: Arrival in Sydney’, The Sydney Morning Herald, Tuesday 17 July 1928, p 11). The car was exhibited for a week in Anthony Horden and Sons’ emporium at Pitt Street for public viewing.

On 25 July 1928 Birtles’s nine month 26,000km motor vehicle journey from London came to an end when he arrived to crowds at the Elizabeth Street post office in Melbourne at 1pm. The centre of the city was brought to a standstill as the car proceeded to Parliament House, where the Premier Mr Hogan welcomed the pair. In 1929, Birtles donated his ‘Sundowner’ to the people of Australia for a proposed national museum in Canberra. Today the vehicle is held in the National Museum of Australia.

Francis Birtles’s remarkable journey driving from London, England to Melbourne, Australia in 1927/1928 represents a pivotal era in Australia’s automobile history. The increase in availability of more sophisticated and practical vehicles and road services in the early 20th century contributed to the gradual decline of interstate passenger travel by ship in Australia.

Photojournalist Sam Hood photographed Birtles and Stollery upon their arrival in Sydney on 16 July 1928. These photos are just a few of the Australian National Maritime Museum’s extensive collection of Sam Hood photographs, which you can now browse on-line.