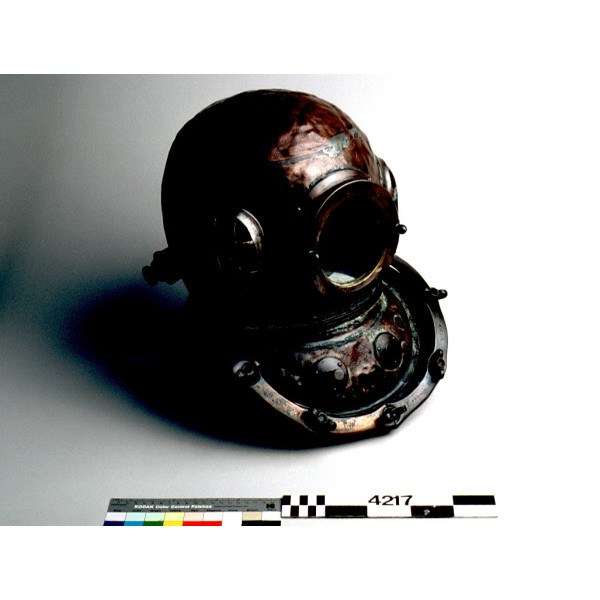 To the depths of beyond: A pearler’s diving helmet

The European-Australian pearling industry began in Australia in the 1850s. By the beginning of the 20th Century, Australia was supplying 75 per cent of the world’s pearl shell, collected from the Northern Territory, north Western Australia and the Torres Strait. Pearl shell was highly sought after and used to make all sorts of items including jewellery, cutlery, belts and buckles.

This type of brass hard-hat airtight diving helmet (00004217) was commonly used in the late 19th century for pearl shell diving. Along with the helmet, a pearler would wear layers of woollen garments underneath a waterproof suit, as well as mittens and weighted boots. The helmet was screwed onto the top of the suit. Pearlers would wear up to 50kg of weight which was strapped to their chest and back. They also wore a belt which carried a scabbard, knife and rope which could send signals back to the crew. Air was supplied to the pearler manually through an air hose, with two men on board the boat turning two large wheels.

In the early days of hard-hat diving, a large number of pearlers died from the ‘bends’, due to problems with equalising pressure both inside and out of the suit. The introduction of the wet-suit, fins, mask and underwater breathing apparatus saw a decline in fatalities and by the 1970s, the use of hard-hat equipment by Australian pearl divers had ceased.

If you would like to read more about the hard-hat diving helmet and suit, you can search our collection on-line.