To celebrate International Talk like a Pirate Day on Monday, 19 September, we thought we’d share some pirate related objects from our collection and also let you know how you can get involved on the day.

‘Blow on, Blow on, The Pirates Glee’ was written for and dedicated to the Salem Glee Club, a men’s choir. The cover features a black and white lithograph by Benjamin W Thayer, titled ‘Storm at Sea in a Schooner’ depicting six pirates on the stern of a vessel as it encounters rough seas. The piece was written to be sung by four male voices. 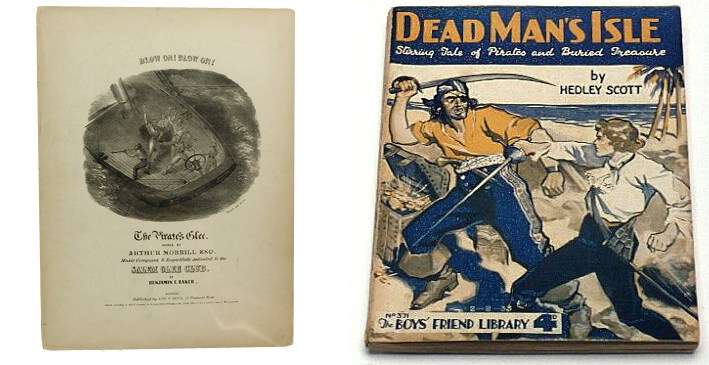 Dead Man’s Isle was first published in 1932 in The Ranger. This blood-stirring tale of the Spanish Main by Hedley Scott was then published in The Boys’ Friend Librarythe following year. The issue is conveniently pocket-sized and in 95 pages follows the hero, Langley Morgensen, on his adventures as he seeks a lonely, uncharted speck in tropical seas – an isle that holds the secret of a buccaneer’s treasure.

Be a part of Talk Like a Pirate Day! Come along to the museum or join us online.

Online
Get your pirate speak ready for a day of online chatter with resident pirate Grognose Johnny! Join us on Facebook and Twitter, use #Talklikeapirateday

Learn all you need to know about  International Talk Like a Pirate Day on the official website.