The collection also houses engravings of the usual suspects associated with southern voyaging including Magellan and Cook and a wonderful map with Cook’s three voyages which dates to 1784 and includes “other modern voyages”.   And what collection would be complete without Cook’s two volume publication “A Voyage towards the South Pole and Round the World performed in His Majesty’s Ships the Resolution and Adventure”? 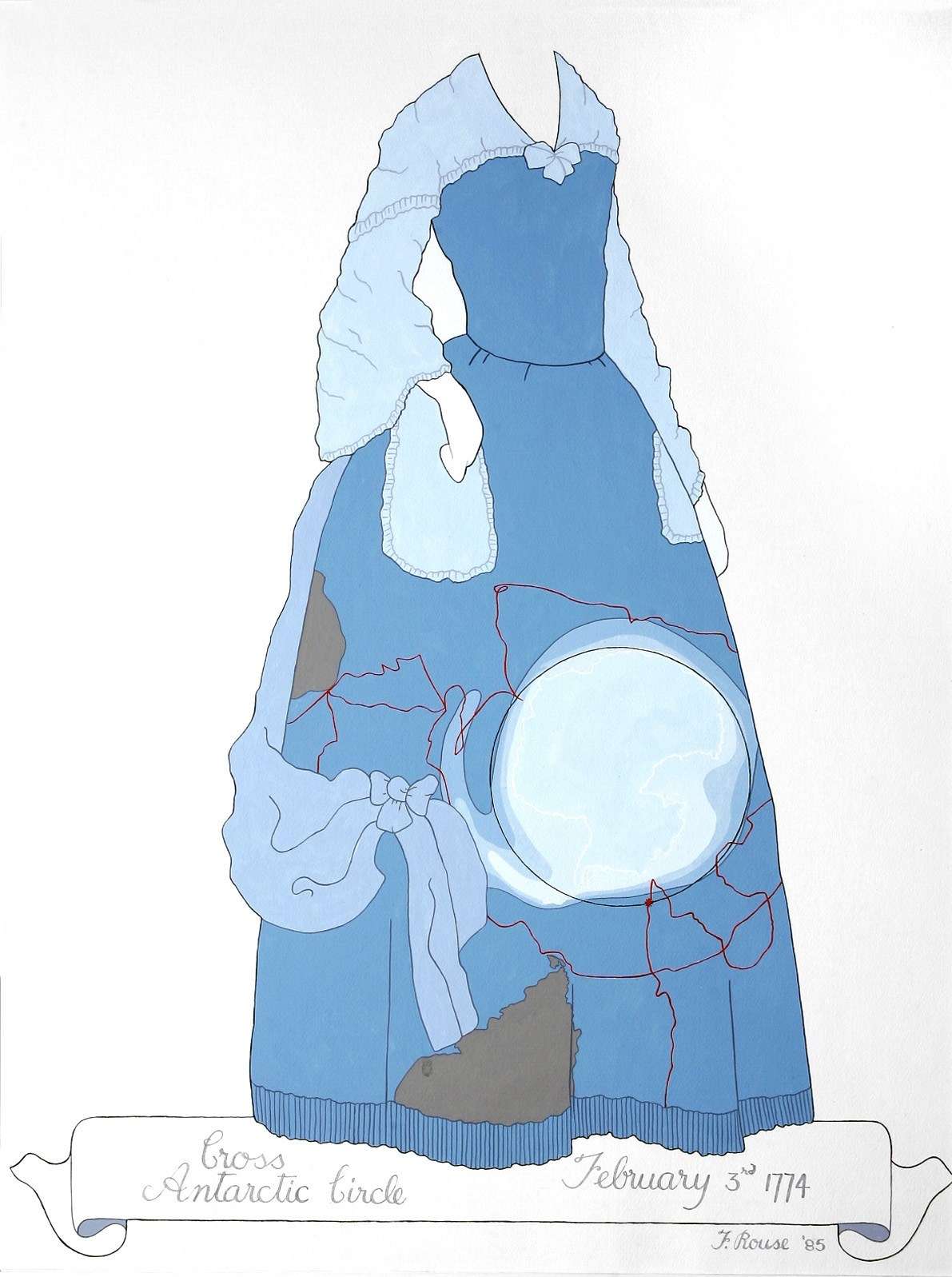 Something quite different is the artwork for a costume designed by Frances Rouse for the play ‘Counting Icebergs’, about the life of Captain James Cook’s wife, Elizabeth. It has a map of Antarctica and Cook’s voyages on the skirt. (see image)

As well as Cook’s books we have the first of the French contributions to Antarctic exploration – that of Dumont D’Urville’s 1837-1840 expedition which included an attempt to discover the south magnetic pole and claim it for France.  It was a horrid journey for them – trapped in ice, harsh conditions on board, scurvy.  They retreated to Chile to recover and had another attempt via Hobart.  This time they crossed the Antarctic Circle, saw one of the US Exploring Expedition Ships and, incredibly, hurried away.  And speaking of the US expedition – the 1838-1842 voyage led by Lieutenant Charles Wilkes – we have the volumes published by this exploration and survey expedition of the Pacific Ocean.  The museum also commissioned two models to be made relating to the US expedition – the Flying Fish and Wilkes’s flagship the Vincennes.

Robert Falcon Scott is of course one of the names synonymous with Antarctic exploration and we have two published volumes from his first British Antarctic Expedition of 1901-1904 – which included an attempt at reaching the South Pole.  The relief voyages are also important to document and the Morning made two voyages to resupply Scott’s expedition in 1902 and then in 1903. One of the officers – Gerald Doorly – published a lively account of his time on the ship.

A second French expedition was undertaken in 1908-1910, under the command of Jean-Baptiste Charcot.  It was his second expedition to Antarctica and he also undertook nine North Pole expeditions.  The name of his ship was the Pourquoi-pas?– the Why-Not?  The expedition charted some 1,250 miles of coastline, took 3,000 photographs, wrote 28 volumes of scientific data and during winter did courses in grammar, English, geography and first aid to pass the time.  The ship had a library of some 1,500 volumes – they were certainly prepared to winter over!  Our Antarctic collection includes a published account – in French – of the expedition. 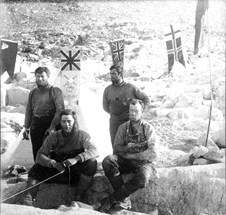 Certainly the most talked about expedition was Scott’s second and fatal Terra Nova expedition of 1910-1913 when the Norwegian Roald Amundsen beat him to the prize of being first to the South Pole.  Herbert Ponting was the first professional photographer to be taken on any Antarctic expedition and he recorded the voyage south on the Terra Nova and became a member of the shore party.  Ponting took black and white and colour photographic stills, and recorded short clips, becoming one of the first to use a movie camera and to take colour photographs in Antarctica.   A number of his more famous photographs were reprinted using the original glass plate negatives and we acquired a fine selection of them.  We also recently acquired a series of 35 stereoscopic cards that featured different aspects of Scott’s expedition, especially the second western party to Cape Geology. (see image)

The other great Antarctic story is that of the crushing of the Endurance and Ernest Shackleton’s remarkable journey to safety and eventual rescue – all caught on camera superbly by Frank Hurley.  Again, his original negatives were used to produce some fine reprints and have added nicely to our collection. Shackleton’s great leadership skills and survival against all odds was used in many ways – including a pamphlet encouraging Australians to enlist in WWI.

The collection covers more than the Heroic Age of Antarctic Exploration. Hubert Wilkins is relatively unheralded but was a major star in his time. This South Australian was a polar explorer, pilot, soldier, geographer, war photographer and ornithologist.  In his latter guise he joined the Shackleton-Rowett expedition on the Quest in 1921-1922.

The Royal Australian Navy has been involved with the Australian National Antarctic Research Expeditions as early as 1947 with the landing ship HMAS Labuan taking the first contingent to Heard Island.  Sailing on this ship was described as “a caterpillar in motion, rippling from bow to stern”.  A crew member kept newspaper clippings and various other ephemera relating to the voyages and these were acquired in 2002. 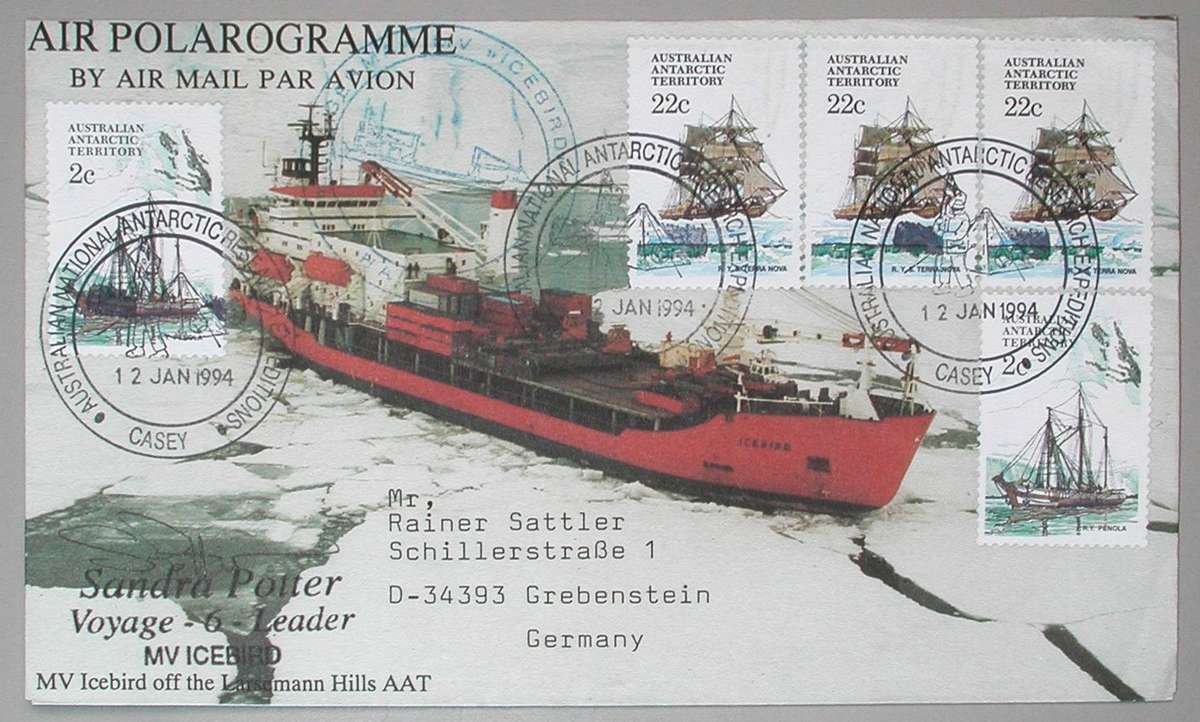 Philately is big in most areas, none more so that the Antarctic – especially with special air polarogrammes and First Day Covers and we have a fine selection from all the major Antarctic bases. (see image)

So you can see that we cover a broad range of Antarctic history and the good news is that we are progressively putting it up on our eMuseum site.  So don’t forget to visit Scott’s Last Expedition and to also browse our collection on-line.