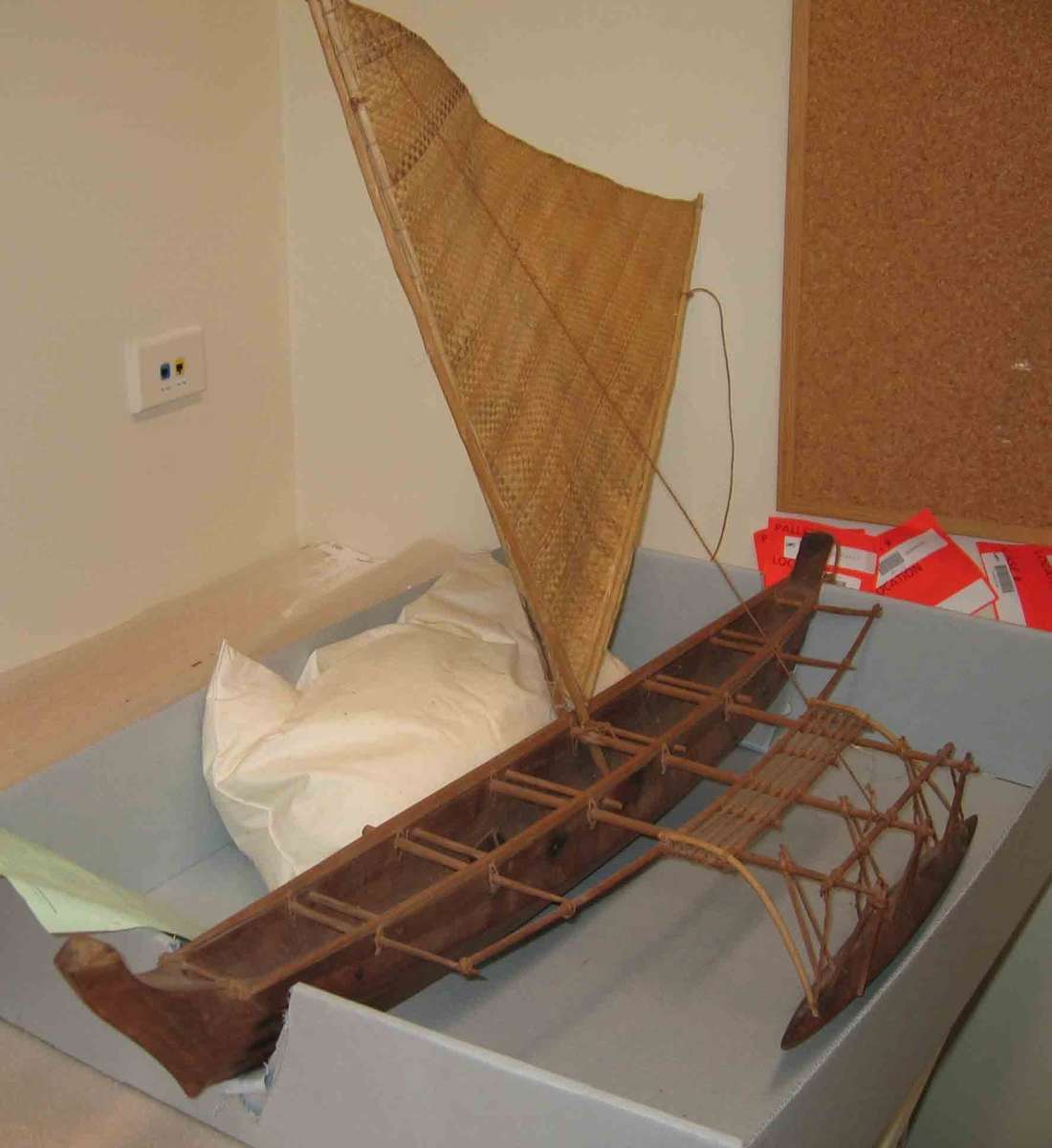 Many objects have fascinating stories and interesting people associated with them that we often don’t get a chance to talk about in detail. None more so than a group of five model canoes and outriggers from various Pacific Islands that I have recently been researching for the museum’s collection.

One is a Kapingamarangi canoe, from the Federated States of Micronesia. There is a Poluwot wa, from the Caroline Islands, a Te Puke from the Solomon Islands, a Kiribati from Nikunau and a Ninigo from Papua New Guinea – all collected in 1969. The fifth model is a Hawaiian canoe, collected in 1976.

All the models were constructed by indigenous Pacific Islander boat builders and navigators. In 1969, four were given to David Lewis and his son Barry as part of David’s research into Indigenous ocean voyaging and navigational methods. Lewis wanted to find out how people could wayfind long distances across the Pacific Ocean without modern navigational instruments.

David Lewis (1917-2002) was a most interesting character. An adventurous New Zealander, in 1960 and with little preparation, Lewis entered the first single-handed trans-Atlantic yacht race. He had long been interested in the navigation methods of historical Polynesian migrations across the Pacific. In 1964 he began to investigate how these voyages over the horizon may have been performed, and he successfully sailed from Tahiti to New Zealand without using a compass, sextant or chronometer.

Ever since the early European voyagers arrived in the Pacific in the 18th century there has been many theories about how the Pacific Islands were peopled. Sailors had long wondered at how islanders could navigate their sailing canoes so well without instruments. David Lewis decided to seek out some navigators and learn from them, rather than speculate about them.

Lewis went to an island in Micronesia that he had heard still made canoe voyages without modern instruments and asked to be taught their navigational lore. He spent several years during the late 1960s visiting other islands and seeking out traditional methods – which most people had assumed had been superseded by modern navigational technologies.

Lewis was accepted as a student by several indigenous navigators and he learnt about nautical almanacs of celestial navigation that were memorised and handed down orally. His work has been considered an important anthropological study. He recorded and published his research in his widely read and highly regarded We, The Navigators in 1972 and The Voyaging Stars in 1978.

Lewis generated further interest among scholars of the Pacific about the history of oceanic migration. He was also instrumental in a revival of traditional boat building skills and navigational lore in many islands across the Pacific. He formed an early part of the growing trend of re-creating historic vessels and re-tracing voyages. He  inspired further ‘experimental archaeology’ across the region, including the Polynesian Voyaging Society, who in 1976 recreated the first dedicated voyaging canoe to be built in the Hawaiian Islands in over 600 years – the Hokulea – and successfully sailed to Tahiti with a Micronesian navigator Mau Piailug, using no instruments.

David Lewis went on to single-handedly circumnavigate Antarctica and published another bestselling book about his adventures attempting this feat, called Ice Bird.
He continued to be associated with Antarctica and in 1975 set up the Oceanic Research Foundation and worked with businessman/adventurer Dick Smith in scientific exploration in the area. Lewis was an extraordinary sailor, anthropologist, author and adventurer.