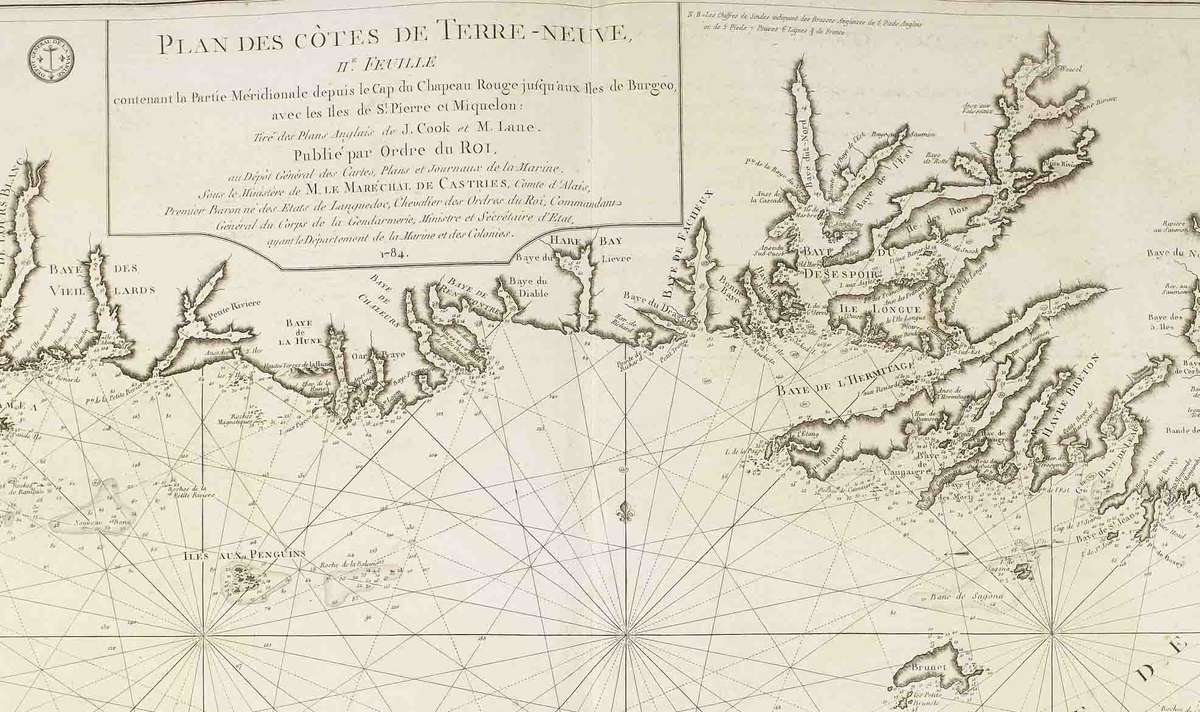 A Map of the coast of Newfoundland after James Cook and Michael Lane by J N Bellin, Paris, 1784.

I’ve recently been putting some information together for the museum’s website on a series of charts in the museum’s collection that were made by James Cook and Michael Lane between 1763 and 1768. Interestingly, these maps are all in French.

Cook is famous for leading three voyages of exploration between 1768 and 1779, and for his charts and surveys made on these voyages. But not so well known are his earlier charts of British and French possessions in the northwest Atlantic around Newfoundland and Canada. These charts were to bring his skills to the attention of the Admiralty and put him in a very good position to take command of the Endeavour in 1768.

In fact the charts were so good, even the French copied them. The French and British had been competing for possession of Canada and Newfoundland, with its rich fishing grounds, since the 1600s. When the Seven Years War broke out in 1756, James Cook saw the opportunity to advance his career in the Navy and arrived at Halifax in Nova Scotia in 1758 as Master on the fourth rate HMS PEMBROKE. He took part in the blockade of Louisbourg and gained instruction in surveying and chart making from an army engineer Captain Samuel Holland, who later became Surveyor General of Quebec.

In 1759 Cook was awarded a special payment of 50 pounds for his charting of the notoriously treacherous section of the St Lawrence River called The Traverse, by which the British were able to gain passage to, and successfully assault, the fortified town of Quebec.

Cook’s talents as a surveyor and mapmaker came to the notice of Admiral Saunders and Cook was transferred to the NORTHUMBERLAND. In 1762 he surveyed the coastline around St John’s, the capital of Newfoundland. He returned to England at the end of the Seven Years War in 1763, where Saunders arranged for Cook’s charts to be published. The Treaty of Paris saw the French lose all claims to mainland Canada, but given possession of the tiny islands of St Pierre and Miquelon, off Newfoundland. Cook was appointed ‘Surveyor in Newfoundland’ and tasked to survey the two islands before they were returned to French control.

Transferred to the TWEED with Captain Douglas, Cook completed accurate surveys in the remarkably quick time of less than two months. The British Admiralty realised the importance of having accurate charts of these difficult to navigate but strategically important coastlines and between 1763 and 1767 Cook continued to survey the coast of Newfoundland during the summer periods, returning to Britain for the winters to complete the charts for publication.

Cook’s Newfoundland surveys are famous for their accuracy and detail. His charts of the so-called ‘infinite mass of indentations, bays and harbours’ in the Gulf of St Lawrence and eastern Canada region have been regarded as the finest surveys and charts of his career.

During his surveying, Cook had recorded an eclipse of the sun and sent a paper on the event to the Royal Society. Along with his charts, Cook’s observations brought him to the notice of both the Royal Society and the Admiralty, who had combined in planning a scientific and exploratory expedition to the Pacific Ocean.

Cook’s Newfoundland charts were published in various countries for many years afterwards. A collection appeared in England in 1769 and then in the North-American Pilot in 1775. Even the French used Cook’s highly regarded maps, rather than draw their own. The museum has a copy of a folio of eleven charts published in France in 1784. It contains eight charts attributed to James Cook and Michael Lane (master’s mate and assistant surveyor to Cook in 1767-8) of the GRENVILLE between 1763-7.

Surviving French versions of the Newfoundland charts are rare, and it is interesting to see in the museum’s copy of ‘Newfoundland, St Pierre, Miquelon – 1763-1782’, Cook’s amazing handiwork translated into French.